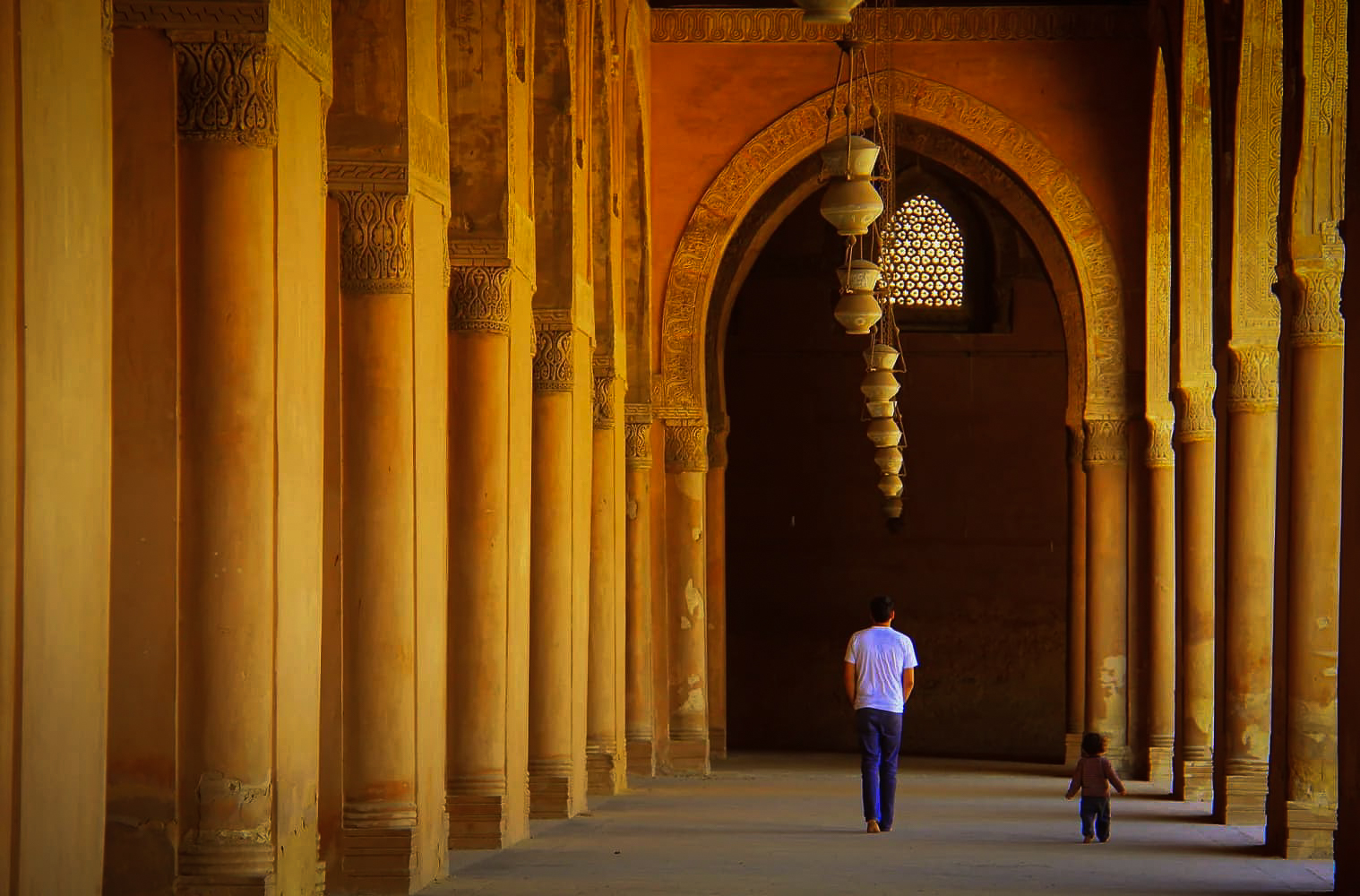 Is Ibn Tulun Mosque the most beautiful one in Cairo?

Everything about the Ibn Tulun Mosque is of legendary proportions. To begin with, it is the oldest mosque in Egypt and one of the largest in the world. Its founder was also one of the most enigmatic and powerful rulers of Egypt and he built this mosque from 870 to 879 AD in order to accommodate all of his troops. It was the third congregational mosque to be built in Cairo at that time. and the oldest mosque in Egypt that has survived mostly in its original form. Needless to say, Ibn Tulun Mosque is as lovely as it is mystical and recently National Geographic listed it as one of the most beautiful mosques in the world.

This is the Ibn Tulun Mosque of Cairo

A mosque built on the landing site of Noah’s Ark

Ahmad Ibn Tulun, the founder of the grand Ibn Tulun Mosque came from humble origins. He was the son of a Turkish slave of Mongol origins and owned by the Abbasid Caliph al-Ma’mun. Despite his background, he rose to great power and founded Egypt’s Tulunid Dynasty (868-905 AD). Ibn Tulun was a quirky man and after becoming the ruler of Egypt, he decided to establish a new city called al-Qata’i atop a rocky hillock. He ruthlessly cleared a Christian and Jewish cemetery in order to do so and thus laid the groundwork for the Ibn Tulun Mosque. Now, the rocky hillock of al-Qata’i is extremely special and many biblical legends surround this place. It is said to be the landing site of Noah’s Ark, the place where Moses had confronted Pharaoh’s magicians, and near the place where Abraham nearly sacrificed Isaac. It was divinity perhaps which saved the Ibn Tulun Mosque when the short-lived Tulunid dynasty fell. After regaining the power of Cairo in 905, the Abbasids had Ibn Tulun’s city destroyed to the ground, leaving only the great mosque intact. But as the center of power shifted away from the hillock, Ibn Tulun Mosque slipped away from memory. It fell into neglect and in the 12th century was used as a temporary shelter by pilgrims, which caused more damage.

Ibn Tulun Mosque was saved by a murderer

The fate of the Ibn Tulun Mosque changed when it gave shelter to the Mamluk Sultan Lajin. He was a conspirator in the assassination of Sultan al-Ashraf Khalil ibn Qalawun and hid in the deserted mosque to save his life. Lajin vowed to restore the derelict mosque if he escaped with his life and kept his word. Though not sure, if a place of worship truly felt happy being restored by a man wanted for murder, but then c’est la vie. Sultan Lajin first restored the Ibn Tulun Mosque in 1296 and the renovation included the rebuilding of its famously unique minaret. After that, the mosque has undergone several restorations in modern times, and in 1999, it received the paving of the courtyard and the refacing of the fountain in black marble.

This mosque was brought back from destruction by an assassin

The Ibn Tulun Mosque was built in the mosque was constructed in the Iraqi Samarran style common with Abbasid constructions. Concentrated around a courtyard, the mosque has one covered hall on each of the four sides, with the largest being in the direction of Mecca. There was an ablution fountain n the middle of the original courtyard. A gilt dome supported by ten marble columns supposedly covered the fountain and a great marble basin was housed under the dome. During its first restoration, Sultan Lajin added the very distinctive high drum domed public water kiosk in place of the fountain and turned the mosque into something more functional. This was not what its founder had in mind and the Ibn Tulun Mosque was intended to be the focal point of the Tulunid capital and administrative seat of al-Qata’i. Originally Ibn Tulun’s palace backed into the mosque and a secret door allowed him direct entry.

The massive red brick mosque is of Mesopotamian style

Ibn Tulun Mosque is about beauty in simplicity

The most striking part of Ibn Tulun Mosque’s beauty is its simplicity and in a city filled with spectacular mosques, its uncomplicated charm shines through. Built in a simple geometric design, this massive red brick building complex covers an area of 2.5 hectares. The outer courtyard which was protected by a moat is surrounded by walled-off wings called the ziyada and during Ibn Tulun’s rule, a vibrant Friday market was held there. The minaret which is the most outstanding part of this mosque features a classical Iraqi/Samarran architectural style of a spiral staircase on the outside of the tower. It is believed that the Sultan designed the minaret himself and it happened by mistake. According to local lore, once Sultan Ibn Tulun was caught unaware and absentmindedly doodling on the blueprint of the mosque. When questioned, the embarrassed Sultan claimed to be designing the minaret and the design happened to be a direct copy of the Samarran style.

This is a sanctuary for peace lovers

I love visiting the Ibn Tulun Mosque. In fact, it is the only mosque in Cairo that I have visited more than twice. The cavernous courtyard seems to swallow up an end number of visitors and you never feel crowded there. The sturdy stucco embellishments of the courtyard always remind me of the Nasrid Palaces of Granada in Spain and the similarity is not a sheer coincidence. A sharp Andalusian influence can be found all over the mosque and it can be seen in the horseshoe arches of the minaret windows. A style brought to Egypt by the Muslim refugees fleeing the Christian Reconquest of Spain, in my eyes, the Ibn Tulun Mosque was built by a lot of homesick hearts. There was Ibn Tulun himself; a ruler who happened to be a sultan by fluke and missed his homeland of Samarra in Iraq so much, that he absentmindedly recreated it in the mosque; the Andalusian refugees who lived in Egypt, though their hearts were forever left behind in exotic Andalusia, a place where they were born and called home. And then there is a homesick expat, who sits in a corner of the mosque and pretends it to be the Jama Masjid of Delhi. How can you not love a place which heals aching souls? Need more reasons to visit the Ibn Tulun Mosque of Cairo?

It is a free attraction, though the caretakers may ask for baksheesh or donations. The Mosque is located in the Sayeda Zeinab district. Most taxi drivers know where the mosque is. The visiting hours are 8 am – 4 pm and do not forget to check out the Gayer Anderson Museum, which is next door. This house/museum is another unique feature of the mosque due to its use of the exterior enclosure wall. In the true Samarran style, these walls were intended to separate the sanctity of the mosque from the city around it. However, in Egypt, this enclosure was made into the houses of the wealthy, who built doors into the walls of the mosque to provide their houses with private and direct access inside. Today all these houses have been demolished and the doorways sealed except for the Gayer-Anderson Museum. It is mandatory to take off your shoes while entering the mosque and visitors should dress modestly. Out of respect, refrain from shouting and taking photographs of people praying. Since the Ibn Tulun Mosque is located near to Sultan Hassan Mosque and Saladin’s Citadel, a visit to all three can be combined in a single day.

Built in a Samarran style

By the short-lived Tulunid dynasty of Egypt,

Ibn Tulun Mosque is a must-visit attraction in Cairo.