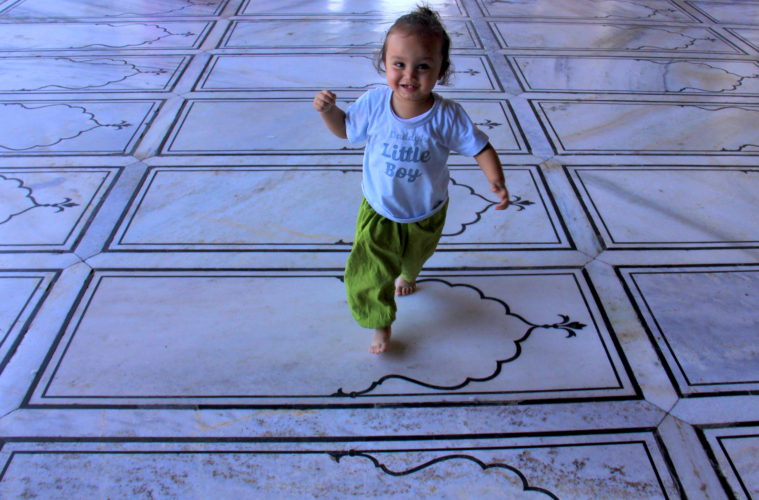 My trysts with Delhi go long back and for some years I called the Indian capital city home. Funnily, all I did during those years was to eat, sleep, shop, and come back to my flat after long foreign projects to drop dirty laundry at my apartment. None of the gorgeous city’s historic charms had seduced me to explore them and even though, I felt the pulse of the city and sensed its aura, I never took the time to lavish the attention it deserves. Thus, the photogenic shock of Old Delhi remained unknown to me and stunning sites like the Jama Masjid, Mehrauli, Red Fort were only names that I read in the newspapers.

The beautiful interiors of the Jama Masjid

Jama Masjid was the dream of the Mughal emperor Shah Jahan

All that changed, when I moved from Delhi and snippets of the beautiful city came back to haunt me. I deeply regretted missing out its beauty and made efforts to make up for it. Thankfully, since most of my international flights were to/from Delhi, discovering the glittering capital of the subcontinent was not difficult and slowly I explored nearly every charm it had to offer. One of my first excursions was to the iconic Jama Masjid and I fell in love with the monument at first sight. A beautiful piece of Mughal aesthetic sense, the red and white monument is one of India’s largest mosques. Designed and commissioned by Emperor Shah Jahan, it was built by a team of staggering 5000 workers who toiled from 1644 to 1656 and the Jama Masjid is the epitome of the golden era for art which was achieved under the rule of the Mughals.

You may also like: An open love letter to Delhi in winter

The iconic mosque of Delhi with bulbous domes.

With a courtyard which accommodates up to 25,000 people at one time, there is always a crowd of visitors inside the mosque. Most are local families who go there with their friends and families and they are gregarious, lively, and cheerful. The rest are awe-struck tourists who find themselves feeling lost amidst the vastness of Jama Masjid. Their reason for being stunned are aplenty and the chaos which rules outside the mosque is one of them. The grand edifice dominates the skyline of the busy Chawri Bazar in central Delhi and its domes bloom like multiple lotuses in the midst of cacophonic pollution. Grime, grit, and a bit of filth surround the monument and Jama Masjid often reminds me of the lotus which flowers amidst muck.

Jointly maintained by the Delhi Wakf Board and the Jama Masjid committee under the directives from the Shahi Imam, it is not easy to get a grasp of its vastness from the outside. But, once you climb up the sweeping stairs and enter the huge gate, the courtyard opens up like a humongous yawn. Once you step into the courtyard, there is a quick sense of being transported into a different realm and the grand monument proudly starts displaying its stunning details. No amount of people stuffed inside manages to tarnish its beauty and because of the size and various niches, a sense of tranquillity prevails. Constructed on an elevated stone platform, the mosque is accessible from three sides east, north, and south. The eastern gate being the largest served as the royal entrance and it is closed on weekdays. Facing the holy city of Mecca, the mosque is surrounded by open arched colonnades from the three sides and the roof is topped with three marble domes which sit atop the main prayer hall.

Check out The street art in Delhi

Step into the courtyard to enter a different realm

The perfect square of an ablution pool lies in the centre of the courtyard and two lofty minarets, each having a whopping 130 steps flank the domes on either side. The southern one is open for the public for a fee and it offers an incredible panoramic view of Delhi with the Connaught Place and the Parliament House in a direct line with the Jama Masjid, a feature incorporated by architect Edwin Lutyens while he was designing New Delhi. In the northeast corner of the courtyard, a white shrine protects a much-prided collection of Prophet Muhammad’s PBUH relics, including his sandals, a hair from his beard and his “footprint” miraculously embedded in a marble slab.

You may also like The street art in Delhi II

The beautiful happy oasis in the middle of chaos

The beauty of Islamic, Hindu, and Jain architectural design of Jama Masjid

I love the Jama Masjid because of its incredible beauty and space. The monument somehow seems very wise to me and it gives a kind all-encompassing aura. The reason could be the liberal use of Hindu and Jain architectural patterns in its design and the mosque is a beautiful amalgamation of ornamentations with floral motifs, calligraphic inscriptions and jharokhas (projecting balconies). Red sandstone and white marble give it a very soothing, cool tone and the black and white marble floor design resembles the Muslim prayer mat. Apart from its beauty, Jama Masjid is also incredibly alive and humane. Happy squealing children fill its niches and the arched colonnade resound with scampering feet. Men, women, and children irrespective of faith and walks of life, rest in its cool shadows while the faithful pray quietly in some corners.

Jama Masjid has the spirit of its creator

Jama Masjid is one kind, tolerant mosque, much like its creator

I took Akash there this March, along with a blogger friend and he had a gala time running around the stunning spiritual space. Being a travel and culture blogger, my friend Nirdesh K.Singh filled me with details of the mosque and I watched Akash playing ball with other small children around. The picture of my little boy playing so happily in such a grand religious monument gave me a lot of joy and suddenly I knew the reason for my strong love for Jama Masjid. The fact that it was magnificent helped a lot, and then there the mosque’s kind, tolerant, and friendly attitude which made me a lifelong fan. Next time, you are in Delhi, just visit the Jama Masjid and feel the monument. It was built with a lot of love by a man who was open and tolerant and you will see how the spirit of the great Mughal emperor still lives on through the monument.

Climb up the sweeping steps and get engulfed in Jama Masjid

Entry Fee: Free entry, Rs. 200-300 photography charge, Rs. 100 from climbing the southern minaret. Visitors should remove their shoes at the top of the stairs. There’s no charge to enter the mosque, but you’ll have to pay the camera charge whether you want to use your camera or not.

How to Reach: Walking distance from Old Delhi Railway station and ISBT Kashmere Gate. Chawri Bazaar is the nearest Metro Station – 500m away. AC and non-AC buses connect Jama Masjid to the entire Old and New Delhi. Autos and taxis can also be availed to reach here.

During my last Delhi visit, I happened to meet a lot of blogger friends like Sushmita Sarkar (My Unfinished Life), Ayandrali Dutta (Wanderlust Craving), Sowmiya Kasturirangan (Sowmya Shastri), Nirdesh K.Singh (Just Tripping), and Tarun Gaur(My Greedy Backpack). I was lucky enough to be hosted by another friend and an avid traveller, Anurag Kakkar, at his place in Gazhiabad. It was a great base for my Delhi visit and he helped me plan the rest of my India trip. An expert in adventure experiences of India, do check out Anurag’s biking and camping tours at www.discoverwildworld.com  Thank you, everyone, for making Delhi such a wonderful experience for Akash and me. We can’t wait to see you all soon. Presenting Jama Masjid photo essay.

This summer we visited

Of Mughal passion for art and architecture

It is the largest mosque in India.

One of my favourite places in India,

I call it the happy monument. Photo Credit – Nirdesh K.Singh

Jama Masjid is more than a mosque.

A popular attraction of Delhi,

It is a gathering place for people

From all walks of life and beliefs.

Jama Masjid is like its creator, an open tolerant museum.