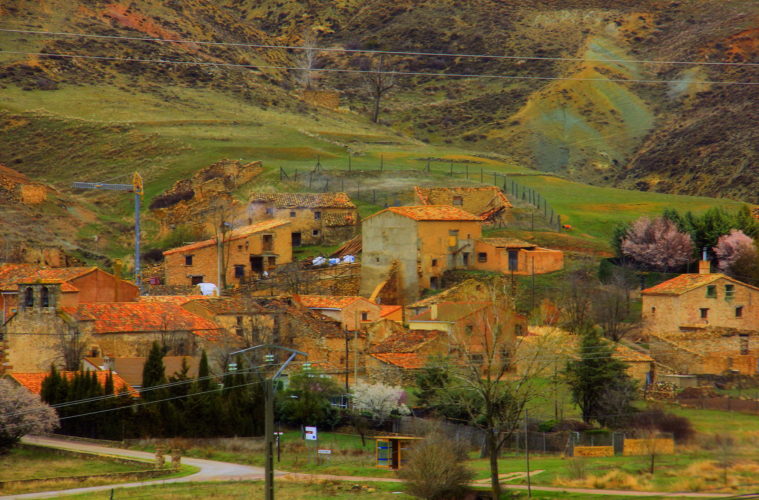 Driving through the plains of La Mancha, the land of Don Quixote

As all good things must come to an end, our stay in Granada drew to a close. We absolutely loved the grand Moorish city and actually overstayed there by three extra days. However, it was time to head north and slowly start crawling towards northern Europe. Germany was still quite far and we had France and Belgium to cross before reaching home. So we left Granada one late evening, said goodbye to the honey-hued Alhambra and headed towards the plains of La Mancha. Our destination was Zaragoza via Cuenca and we had a very long drive ahead of us. The distance on the map showed 725 kilometers and we wanted to cover it with ease in about 9 hours. Night driving through Spain is quite relaxing and we were going to travel through the historic plains of La Mancha.

La Mancha is the setting of Cervantes’s Don Quixote

Nearly everybody knows the famous story of Don Quixote, the Spanish nobleman who has some really absurd concepts and adventures. Written by Miguel de Cervantes, Don Quixote la Mancha was published in 1604 and it is about a country gentleman whose brain is fried by outlandish tales of chivalry. With the faithful and shrewd, Sancho Panza as his sidekick, Don Quixote has many (mis)adventures with the most famous being him charging at windmills and sheep after mistaking them for giants and armies. The tale which has an ending like a fable is as whimsical as it gets and beautifully describes the plains of La Mancha, where it is set. Apart from that, this vast naturally beautiful and historical region is given a miss by most visitors to Spain. They usually pick and choose a few of La Mancha’s highlights like Madrid and Toledo and overlook anything else the region has to offer.

This is the land of the delusional knight, Don Quixote

La Mancha is a patchwork of flat fields and obscure villages

That is quite a pity because the plains of La Mancha are astonishingly pretty, offbeat and diverse. At first sight, however, the beauty of the plains of La Mancha does not shine through and a vast bare bone plain is met by the eyes. Summers are scorching there and winters are bitter. The Arabs called it manxa meaning a steppe from which the region derives its name La Mancha. However, once you delve deeper and go closer to the northeast, craggy mountains take over the patchwork of buff and green fields and you find yourself in the lush wine-growing agricultural belt of Spain.

You may also like: The fortified French town of Carcassonne

A patchwork of flat fields and obscure villages

Our drive through La Mancha was exceptionally memorable since we actually saw the landscape change in diversity with our very own eyes. It was like watching a travel movie and the mountains near Cuenca gave way to featureless brown plains in a seamless manner. While the mountains were stunning with their forests, gorges, blue-green streams, the plains too were quite fascinating. Punctuated by occasional farmhouses, which seemed like they belonged to another century, obscure villages, and forts, the brown plains of La Mancha looked something out of a storybook. The vastness was something very striking about the region and we were quite startled by how less visited it was. We hardly passed any car during the entire drive and it was like stepping into a movie. Even the gas stations and other highway facilities seemed too far off from one another and the landscape changed once we neared Zaragoza.

La Mancha is also a land of mountains, gorges, and wetlands

La Mancha to Zaragoza was a journey through overlooked Spain

Traffic became heavier, the local population looked more multicultural and heavy industries lined the highway. Here and there, the ephemeral patches of villages mushroomed among swathes of purple wildflowers, which seemed to cover the district of Aragón in spring. Zaragoza arrived sometime around mid-day and we stayed there for only one night before crossing over to France via San Sebastian. So, apart from the unforgettable reflection of the multi-domed Basílica del Pilar on the still waters of Río Ebro, we saw nothing of Zaragoza, which is ironically the hometown of my favourite painter, Goya. But the drive from Granada to Zaragoza was so fulfilling that I have no complaints and we also inadvertently followed the footsteps of the Christian Reconquest hero, King Ferdinand. He was born in Aragón and traversed this route to snatch Granada from the Moors. Now, that is a full circle.

This village seemed to melt into the landscape

The 17th-century novel, “Don Quixote de la Mancha” is a literary classic. One of the most famous books to come out of Spain, it talks about the adventures of a delusional knight. Written by the working artist, Miguel de Cervantes in 1605 and once again in 1615, the vast plains of La Mancha are used as the whimsical setting of this masterpiece. In the opening lines, Cervantes describes Don Quixote living in “in a village of La Mancha, the name of which I have no desire to call to mind”. Just by this quote, Cervantes has cleverly blended his literature with the landscape and picked and chose the natural tapestry just enough to make it real while creating a mythical aura. Today, the story of Don Quixote still draws a lot of interested visitors and this literary route is fast becoming popular in the offbeat travel circuit. The best part about it is the close proximity to Madrid, from where you can follow this trail as a weekend getaway.

So where is La Mancha?

The region of Castilla-La Mancha is in central Spain. It lies southeast of Madrid and consists of the provinces of Albacete, Ciudad Real, Cuenca, Guadalajara, and Toledo. The route suggested in this link is best done by car. It lasts for approximately 7 days and crosses 13 inland towns. However, you can opt for the shorter trail which is mentioned below.

This is the lesser known part of Spain

What to eat in La Mancha, as featured in Don Quixote?

The two famous things about La Mancha are Don Quixote and manchego cheese. La Mancha is well-known for its simple, down-to-earth cuisine that heavily relies on local ingredients. Many traditional recipes of La Mancha have been made famous in Cervantes’ classic Don Quixote. Dishes such as gazpacho manchego (a stew usually made from rabbit mixed with chunks of unleavened bread), atascaburras (potato purée served with salted cod and garlic) and pisto manchego (assorted fried vegetables in a tomato sauce and topped with a fried egg) are among the staples. The region is famous for its garlic and saffron and its celebrated Manchego cheese comes in a bewildering array. It can be mainly divided into semi-curado (semi-cured) and curado (cured). Both need to come from the local Manchegan breed of sheep. The more expensive cured Manchego cheese is quite intense and is best paired with a glass of wine from the Valdepeñas vineyards.

While driving from Granada to Zaragoza.

It was by sheer luck that we saw this obscure part of Spain,

Which is the setting of Cervantes’s famous novel, Don Quixote.