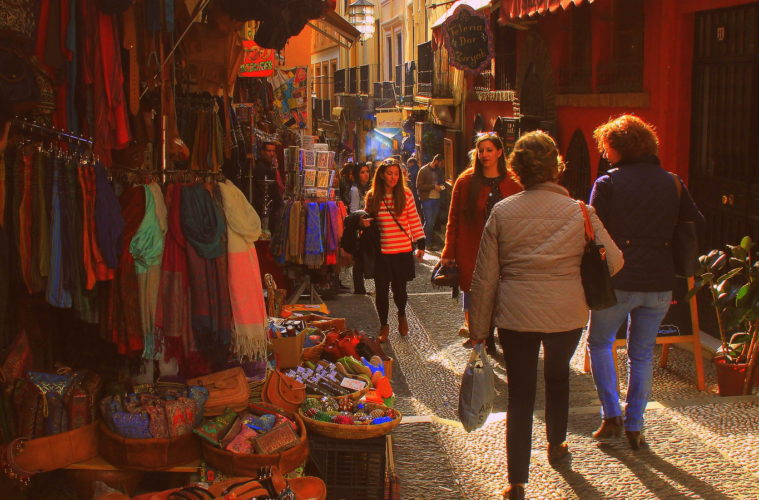 Things to do in Granada

I do not usually pinpoint a place as “Must See”, but if there is one city in Spain that you should visit, then it has to be Granada. A melting pot of culture and history, Granada is one of the most fascinating places in all of Spain. Apart from the magnificent Alhambra, there are lots of other beautiful monuments to visit, sights to see, and the city has a young, hip population. It is filled with great tapas bars, colourful street art, and lots of nature thriving around it. The Sierra Nevada looms over Granada and it is just one of the places where you can soak up some nature or go hiking. So irrespective of whether you stay in Granada for 1, 2 or 3 days, here are some of the fun things to do in this beautiful Moorish city.

The awe-inspiring Alhambra is the highlight of Granada

Alhambra is the highlight of all amazing things to do in Granada and for many people, the main reason to visit the city. I have already written a few posts on Alhambra including a guide on how to make the best of your visit to this UNESCO Heritage Site. You can check those posts to get more details. Until then, here’s a brief intro to this spectacular Islamic fortified palace complex. Alhambra hails from the 9th century and consists of many palaces, gardens, and the magnificent Nasrid Palaces. It used to be the residential and administrative quarters of the Nasrid sultans of Spain and after the Christian Reconquest of Granada, King Ferdinand and Queen Isabel have lived there. One thing is for sure, that there are very few places on earth like the Alhambra and you should book your tickets online ahead of your visit.

Light filters through the Granada Cathedral

This cathedral has been built atop the city’s former mosque. It was originally planned to be in Gothic style but over two centuries of construction made the cathedral end up being a mixture of Renaissance and Baroque influences.

Outside the Capilla Real

The royal chapel or the Capilla Real is the final resting place of many Spanish royals, among whom the most notable are Isabel I de Castilla and Fernando II de Aragón. The sacristy contains a small museum which displays Fernando’s sword and Isabel’s sceptre along with a silver crown and personal art collection. It also has Botticelli’s Prayer in the Garden of Olives. Photography is not allowed inside the Capilla Real.

Granada has more than just Alhambra

Built sometime between 1737 and 1759, this heavily embellished basilica is a jaw-dropping display of opulent baroque interiors. Dazzling in gold and silver, frescos by Diego Sánchez Sarabia and the Neapolitan painter Corrado Giaquinto adorn the ceilings and side chapels. The highlight is the extraordinary gold altarpiece in the main chapel or the Capilla Mayor.

Details found inside the Madrasa in Granada

The Madrasah or Madraza, a 13th-century university

The Madraza is the first 13th-century university in Granada. Founded by Yusuf I in 1349, the building is breathtaking and showcases the Moorish architectural styles. Located in the middle of Granada in Oficios Street, it is near the main market of Alcaicería. After the Christian Reconquest of Granada, the building was converted into a town hall in 1500 and all the contents of its library were burnt. It is said to have been the biggest public bonfire of Europe at that time. After The Catholic Monarch, Ferdinand II, gave the building to the Cabildo´s house (town hall) in 1500, after the content of its library was burnt by Cisneros in Plaza Bib-Rambla. It was, sadly, one of the biggest public bonfires across Europe and its Arabic construction was demolished to give the building a baroque makeover. Today, the Madrasa is the headquarters of the Royal Academy of Fine Arts and a part of the University of Granada. From the Madrasa’s Nasrid architectural glory, only the Oratory and a stunning mihrab remain intact today and the octagonal dome is jaw-dropping. At the time of our visit in 2016, extensive restoration was going on and most parts of the building were closed. The Madrasa is near the Cathedral in front of the Capilla Real. You can reach there by the city bus routes 4, 8, 11, 21, 33 (the bus stop is ‘Gran Via 1’ or Cathedral), routes C31, C32, C34 (the bus stop is ‘Plaza Isabel Catolica’).

The bustling central Granada is very popular among tourists

The shops of the Alcaiceria (Mercado)

The Alcaiceria has existed in Granada since the 15th century. Although the original market burned down in the 19th century, the reconstructed souk is also worth a visit. Go there to soak up some Moorish aura, and buy souvenirs to take back home. However, don’t get your expectations high and arrive early to avoid the coach tour crowd.

Built in the 14th century, the Corral del Carbon de Granada is the oldest monument of Muslim Granada. Originally used as a warehouse of goods, the cobbled courtyard is quite intact and very well restored. Two storeys of brick galleries surround the courtyard and it was used an inn for coal traders, thus rendering the name “Coal Yard” or Corral del Carbon. Look out for the elaborate horseshoe arch entrance.

We discovered this Granada institution by chance. It was located near our hotel and the number of locals thronging there gave away Los Diamantes’s status quo as a food hotspot. A great watering hole for socializing and meeting locals, don’t go by its scruffy old-school appearance. Los Diamantes is one of the best eateries on bar-lined Calle Navas. It is always busy with usually only standing room available and the seafood tapas which comes free with your drink is to die for.

Location: Calle Navas 26 and a new branch on Plaza Nueva

In Granada, you are never too far away from great food

This is a very intimate place, which is perfect for those seeking some solitude. A 16th-century monastery dedicated to San Jeronimo, it is one of Granada’s most beautiful Catholic buildings. The interiors are complete with cloisters and a lavish decoration and the church boasts of a mix of late Gothic and Renaissance influences. There is a profusion of painted sculptures and vivid colours on the apse’s immense eight-level gilt retable. The monastery’s lime and orange trees filled gardens are soul soothing.

The stunning interiors of San Jeronimo Monastery in Granada

This is a very pretty place. Seemingly created for taking photogenic breaks and Instagram worthy moments, Plaza Bib-Rambla is a pedestrian-only picture perfect square lined by 19th-century townhouses, lime trees, kiosks, and touristy cafes. Ornamental lampposts decorate the square and the plaza’s centrepiece is a baroque 17th-century fountain of Neptune standing atop an obelisk-like structure, balanced on a disk supported by grotesque figures.

This is one of the most scenic walks in Granada. It goes by the Darro River and is crossed by two brick and stone bridges. The streets date back to the 17th century and gorgeous buildings line the cobbled uphill lanes. There are some great cafes, art galleries, and lovely restaurants in this area.

This is one of my favourite places in the entire Granada. Located on the Carrera del Darro, it is a perfume museum housed inside a 17th-century Renaissance palace. The historic building was constructed by Marquis de Salar and the Patio De Los Perfumes takes its visitors on an olfactory tour of the history of perfumes of the region. You can see exhibits showcasing the art of manufacturing fragrances from antiquity through to modern times. There are special guided tours every day from 10 am to 8 pm. There is also a lovely courtyard full of fragrant plants, flowers, and herbs. A special patio bar offers a selection of teas, smoothies and natural fruit juices. The history of regional perfume tours cost 9 Euros per person and lasts for 45-minutes. There are also several workshops held on the premises and for more information, check out the official Patio De Los Perfumes website.

Baños Árabes El Bañuelo or the Arab Baths are located by the river on Carrera del Darro. It is a very well-preserved, 11th-century Islamic bathhouse with bare brick rooms featuring columns, capitals, and marble-tiled floors.

Albayzín district is the former Arab Quarter. Till today, it looks very exotic and Moorish with discreet courtyards, narrow winding lanes, and traditional tea-houses. Albayzín also has one of the best miradors or viewpoints, i.e the Mirador de San Nicolás which provides one of the best views of the Alhambra. This part of Granada is hilly with a maze of narrow, winding streets and a beautiful place to explore. Check out Calle Calderería Nueva, a narrow street famous for its teterías (tearooms). You can also shop for slippers, hookahs, jewelry and North African pottery there. Also, drop by at El Huerto de Juan Ranos while exploring the Albaicin area of Granada and enjoy a beautiful al fresco setting coupled with stunning views of Alhambra.

Albayzin is one of the most photogenic quarters of Granada

Tetería Dar Ziryab is located on Calle Calderería Nueva in Albayzín district. It is also one of the most traditional ones, complete with dimly lit interior, adorned with tiling, cushioned benches, and typical Moorish latticework arches. Order a mint tea and a cachimba (water-pipe) there.

Sacromonte is one of the most unique neighbourhoods of Granada. Home to the city’s Roma community, Sacromonte has many cave dwellings and whitewashed streets. Though the area gets a bad rap for exploring alone at night, during the day time, it offers amazing views. There are lots of lively cafes and restaurants dotting the main stretch of  Camino del Sacromon, and in the evenings you can enjoy a traditional flamenco show in a cave. We went to one of these shows and simply loved it.

Traditional house in Sacromonte in Granada

Realejo is one of the most charming neighborhoods of Granada. It is the city’s old Jewish quarter and has winding streets and discreet squares. The Iglesia Santo Domingo church is a must visit here and you will find some amazing street art decorating the walls of Realejo.

Nature walks in the Sierra Nevada

Give yourself a break from Granada’s opulence and head over to Sierra Nevada for some R&R. Take a 25 minutes bus ride to Monachil and explore the Hanging Bridges of Los Cahorros and a waterfall. The views are spectacular there and you will find a huge variety of hikes.

Granada is just so beautiful.

If there is one city in Spain that you must visit,

Then it should be gorgeous Granada.