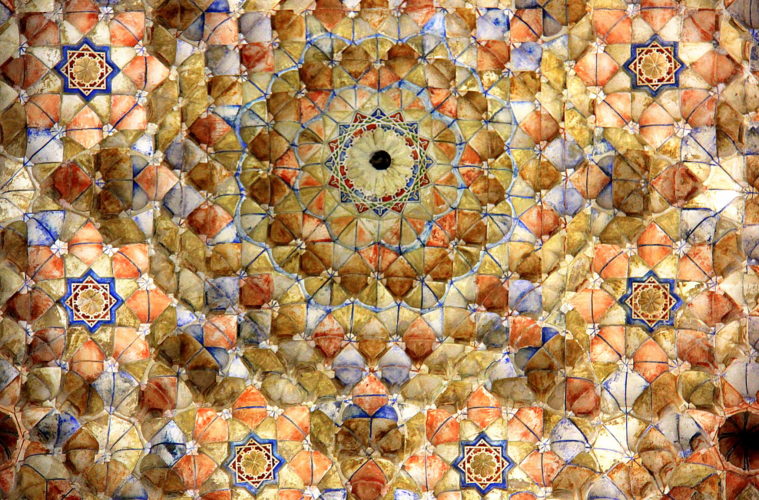 Granada is the epitome of Andalusia in my eyes. Everything about it captures the mysterious grandiose Moorish dream…those orange blossoms, the blooming jasmine, the plaintive wail of a Roma gypsy, the swish of a flamenco dress, glimpses of the snow-capped Sierra Nevada, and a bedazzling castle. It is a city which seems to have been made for the intriguing Andalusian essence of “duende”. The elusive spirit that drives through most things Spanish, as the flamenco, ‘duende’ can be loosely translated as a moment of heightened emotion that hurls you out of your spirit. This soul awakening (and goose-bump inducing) experience can be felt at an artistic performance, a poetry recital, an arousing speech or at Granada at the right places at the right time. You feel ‘duende’ while watching clouds race over the spectacular Alhambra, listening to the flamenco dancer’s footsteps quicken with passion, and gazing at stunning mosaics of San Jeronimo Monastery. ‘Duende’ is evoked by the exquisite details of the Nasrid Palace, the timeless Arab quarters of Albaicin, and the way sunsets paint Daro river almost orange.

Granada overflows with passion like at this cave flamenco show.

Granada is a heady mix of the exotic and the modern

We felt all these and more in Granada. For instance, our first experience of Granada was its edgy, gritty modern side and we got hopelessly lost in its gridlock of streets. It is a compelling city, which brings most of its visitors to their knees and you have no choice but to be awed by it. Granada sprawls like a giant at the foot of the mighty Sierra Nevada and bears the important legacy of being the last stronghold of the Spanish Moors. This legacy draws most visitors like bees to honey and they go home with strong impressions of an energetic, huge city where serene Islamic architecture mingle seamlessly with monumental churches, buzzing tapas bars and Arab influenced street life. Thought-provoking graffiti splash Granada’s public places and Arab inspired mint tea is served in landscaped gardens. There is a lot happening in Granada at any given time and on the weekends, the city feels like a mega carnival. Its strong student population pour into the bars, cafes, dives, and the locals mix with the tourists in sampling the endless tapas platters in town. The strumming of guitar ring from cave flamenco bars in Sacromonte and the stars crowd over Granada to witness the city’s eternal spectacle.

Recommended Read: A guide for the perfect one-week road trip

It is a modern city with a centuries-old legacy

Granada is the epitome of the Andalusian appeal

A huge part of Granada’s (and entire Andalusia’s) appeal can be credited to the exotic mix of Islamic Christianity essences. Left to jostle for importance for eight centuries in Andalusia, the volatile cross-fertilization of these two faiths have shaped Granada and this city is made up of layers which can be easily separated. Some of Granada’s most beautiful churches bear tale-tell signs of ancient mosques, the cuisine is infused with North African spices, hammams (Arab baths) and teterías (tea houses) invoke a Moorish lifestyle, and the vast palace complex is filled with exquisite stucco designs of Arabesque patterns. Stunning murals of Arab design adorn the local pottery and Granada’s glory lies in them all. Though you can separate the different aspects, taking them apart would destroy Granada and the crown jewel of Andalusian Spain would lose its ‘duende’ invoking aura.

Details like these at the Nasrid Palace evoke a Moorish aura.

This is not just a Moorish dream, but a tale of survival

Granada’s glory has always been delicate and precarious. Established in 1238 by the prince of Arab Nasrid tribe, Ibn al-Ahmar, Granada was the last stronghold of the Spanish Moors. Though Ibn al-Hamar was a very just and able ruler, he arrived into the scene when all over Spain, the Christian kingdoms were getting back to power. The Granada Moors managed to survive by paying allegiance to Fernando III of Castille and taking extreme measures of even assisting him in the conquest of Muslim Seville. Owing to such shrewd survival techniques, the city maintained its autonomy for nearly two and a half centuries and even flourished under the rule of Yusuf I and Mohammed V. These two sultans were mostly responsible for creating the Alhambra Palace and it is an exquisite work of art. However, by the mid-fifteenth century, Granada’s luck ran downhill and the city was plagued with internal strifes, civil wars, and the seven months siege laid by Ferdinand and Isabella. On January 2, 1492, the Moorish sultan of Granada, Boabdil formally surrendered thus completing the Christian Reconquest of Spain. The last of the Spanish moors fell with the conquest of Granada.

Suggested Read: Reaching Almeria, one of the southernmost cities of Spain

The Moorish dream still lives on in Granada today

After the Christian Reconquest, queen Isabella went into a nearly fanatic campaign of ruthlessly exterminating every kind of Moorish influences. Hundreds of Muslims faced conversion to Christianity against the threat of exile, Arabic books were burnt, and mosques were changed into churches. The architecture of Granada is thus more sedate and austere in comparison to flamboyant Seville and other Andalusian provincial capitals. However, the sparkle still remains and after taking in the exquisiteness of Alhambra, if you still have the capacity, then explore the old Arab quarters at Albaicin, walk around its narrow alleys and squares; visit the Capilla Real, where monarchs responsible for the Christian Reconquest of Spain lie in eternal slumber and experience ‘duende’ at the spectacular La Cartuja monastery. Then, when you go up to the mirador or viewpoint and watch Granda sprawling on three hills, you will see not a city, but a grand old Moorish dream.

You may also like: The Moorish port city of Almeria

Bylanes and alleys of Granada

The bustling souks at the old Arab Quarter

At one of the beautiful squares of Granada

The lovingly restored wooden ceiling of the Mosque-Madrasa of Granada

The magnificent interiors of the San Jeronimo Catedral of Granada

The stunning Alhambra of Granada

Serenely landscaped gardens set amidst the foot of the Sierra Nevada

A flower-filled spring that invokes ”duende”.

How can you not love Granada?