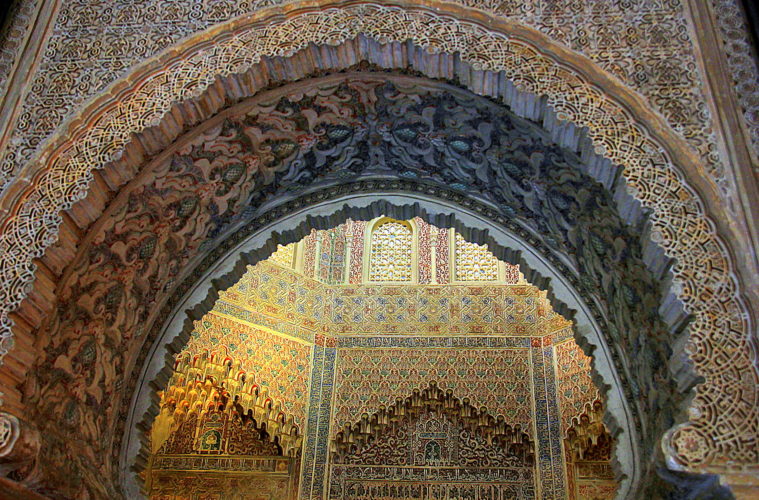 All you need to know before visiting Alhambra, Spain’s most visited site

The Koran describes paradise as a shaded, leafy garden decorated with running water and where the “fortunate ones” may take their rest. This seems to have been the vision behind the creation of Generalife, the gardens and summer palace of the Moorish sultans of Granada. What am I talking about? I am trying to describe Alhambra, or rather a part of the opulent complex, which is one of the biggest attractions in Spain. Drawing up to 6000 daily visitors, it is the most exotic charm of Andalusia, a Moorish dream, an unforgettable experience. Located against the backdrop of snow-capped Sierra Nevada, this fortified palace complex encompasses the glory and power the Moors once had in Spain. The complex, which started as a walled citadel slowly flourished into the magnificent seat of Granada’s Nasrid dynasty. Consisting of the 14th century Palacios Nazares, along with the gorgeous Generalife gardens, Alhambra proudly boasts of some of the finest Islamic architecture of Europe.

A flower-filled spring at Alcazaba at Alhambra

History of Alhambra and its rediscovery

The origins of the Alhambra are debatable. It has been first mentioned in some 9th-century literature, though most believe that the complex buildings date back to Roman times.  However, it is commonly agreed upon that Alhambra in its present form goes back to the 13th and 14th centuries when the Nasrid sultans turned it into a fortified palace complex. Alhambra just like the city of Granada has faced a lot of turbulent times and the changing of the rulers was not easy for the complex. After the Christian Reconquest of Granada in 1492, Ferdinand and Isabella took up residence at Alhambra. They left it relatively untouched except for restoring some rooms and converting the mosque into a church. It was their grandson, Emperor Charles V who wreaked havoc in the complex and he demolished a whole section of rooms to build a Renaissance palace, which still bears his name. Later, in 1812, it was occupied by Napoleon’s forces when they were invading Spain and the French Napoleonic army looted and destroyed most of the palace. They even attempted to blow it apart, when luckily the plot was undone by a brave old soldier. Twenty years later, Alhambra shot into recognition when the American writer Washington Irving set up study at the empty palace rooms and started writing his beautifully romantic ‘Tales of the Alhambra”. After the publication of the book, Alhambra was recognized as a national monument and ever since serious restoration work has been meticulously putting together the palace complex back to its Moorish glory.

The four main parts of the Alhambra complex

Alhambra is made up of four distinct sections: the Palacios Nazaríes (Royal Palace, or Nasrid Palaces), Charles V Palace, the palace gardens of the Generalife, and the fortress Alcazaba. Of all three, the fortress dated back to the eleventh century and was made by the Ziridian rulers. In fact, it existed at the time the Nasrid ruler Ibn al-Ahmar made Granada his capital and its deep tawny walls rendered the name: Al Qal’a al-Hamra which means “the red fort” in Arabic. It is possible to see all the three sections of Alhambra and below are some of the most beautiful (and Instagrammable) spots of this vast fortified palace complex. them all when you visit the Alhambra.

You may also like: The white village of Nijar in Spain

The stone lions of Alhambra which are iconic Granada

The Nasrid Palace of Alhambra

This is the main attraction of Alhambra. This requires a separate ticket and time slot and make sure that you do not miss your appointment. The complex authorities are very strict about the booking time and restricting the number of visitors so don’t be late, otherwise, you won’t be let in. Constructed mainly from wood, brick, and adobe, the Nasrid Palaces are a beautiful contrast of simplicity and details. While the architectural style of the palaces is pretty simple in designs, the exquisite ornamental stucco decoration steals the show. Arabic inscriptions feature prominently in the ornamentation, with some poetic eulogies to the buildings and sultans. There are three main buildings inside the Nasrid Palace and each section is arranged around an interior court and has a specific function.

The grandiose Charles V Palace or Palacio de Carlos V seems as out of place in Alhambra, as it rightly is. It stands in its Renaissance finery in the midst of Moorish exotic beauty and just does not blend in. Quite understandable, since Charles V actually demolished an entire wing of rooms of the Nasrid palace to make space for this oval building. An austere stone structure, the Charles V Palace started getting built in 1526 and was never finished. It is the only surviving work of Pedro Machucha, one of the former pupils of Michelangelo and has Ionic columns projecting up to an open sky.

Generalife literally means the “Garden of the Architect”, and the grounds are the perfect spot to take a break during the Alhambra tour. Dating back to the 14th century, Generalife used to be the sultan’s summer estate. It is a beautifully landscaped area filled with pathways, pools, fountains, gazebos, trees, and flowers. Derived from the Arabic term ‘jinan al-arif’, Generalife consists of the Jardines Neuvos, the whitewashed Palacio del Generalife, and a beautiful staircase known as the Escalera del Agua. According to the descriptions of the Generalife found in the accounts of the 14th-century historian, Ibn Zamrak, the grounds used to host beautiful summer festivities like horse racing at dusk, fireworks display, and acrobatic shows. Though much of his flowery description can be called embellished, Generalife survives till today as a wonderfully landscaped area of respite.

Suggested Read: A guide for the perfect one week Andalusia road trip

The Alcazaba is the oldest part of the Alhambra fortified complex. It is also the most ruined and at its summit, which is called the Torre de la Vela, there used to be a huge bell. Until recent years, the bell used to ring the irrigation hours for workers of vela, Granada’s fertile plains. It was also at the Torre de la Vela, that on January 2, 1492, the Cross was first displayed alongside the royal flags of Aragon and Castile, thus marking the end of the glorious Moorish rule of Andalusia. During the Nasrid times, a ravine used to divide the royal palace and the Alcazaba and today it is a walkable area called the Plaza de los Aljibes. After the reconquest of Granada, this ravine was filled up to hold two rainwater cisterns and the surface above was paved with fortifications, thus making Alcazaba a part of the Alhambra complex.

Stunning views of Granada from the summit of Alcazaba

The Alhambra is the most visited site in Spain. It draws up to 6,000 visitors every day and visiting this famous fortified complex needs planning. The most important aspect is to avoid queueing up for tickets. For this reason, you MUST book tickets in advance. We did not do this and the result was Tarek standing in the queue at 6 am for a few hours to get buy a ticket. This is due to the fact that only 300 people are allowed to visit the Nasrid Palace every day and every visitor is allotted a specific time of entry.

How to buy the Alhambra ticket online

To avoid all travel hassles and book your Alhambra ticket online.

Now, even when the online purchase of Alhambra ticket can be quite bamboozling due to the overwhelming range of options and you can opt for the Alhambra General, which gives you access to all sites including the gardens.

Due to the huge rush which Alhambra draws every day, it makes sense to book tickets in advance

Get guaranteed Alhambra access with your Granada City Card

You can also get guaranteed access to the Alhambra with your Granada city card, available at the Granada Tourist Office. Priced at 37 Euros, it is way more expensive than the standard entry price of €14.85. However, you get access to several other attractions of Granada with this bundle pack.

Ticket prices and Things to Remember before visiting

14.85 Euros is the cost of a General Daytime ticket. The Alhambra ticket bookings open 90 days in advance and sell out immediately during the peak season. You can book tickets online up to 2 hours before your visit. Being a highly protected monument, there are many strict rules for visiting Alhambra. Selfie sticks, tripods, and backpacks are not allowed inside the Alhambra.

Alhambra from the other side of the Daro river

There are two time-slots available in the morning and afternoon. Morning tickets are valid from 8:30 to 14:00 and afternoon tickets from 14:00 to 18:00 (20:00 in summer). It is mandatory to enter the ticketed areas like Nasrid Palace, Generalife, and Charles V Palace within your appointed times.

Alhambra is most crowded from April to June. July and August are also scorching hot with the temperature soaring up to to 40 degrees Celsius. In summer, the morning session is more popular and in winter, Alhambra is busiest in the afternoon. Afternoon slots at Nasrid Palace are very popular with large group tours and are best avoidable. Try visiting Alhambra in spring or fall, when blooming flowers or fall colours make Granada resplendent and crowds of tourists are low.

The view of spires and rooftops of Granada from

How to reach Alhambra

Though most Alhambra visitors stay in Granada, many people opt for a self-drive day trip or organized tour from Seville or Malaga. It is a 90 minutes drive from Malaga to Alhambra. From Seville, the one-way drive takes a bit less than 3 hours. Parking is available near the main entrance of Alhambra at Camino Viejo del Cementerio. Go early since the parking spot gets filled up fast. Buy your ticket and then walk 10-15 minutes to reach Nasrid Palace from the main gate. Continue to the Carlos V Palace and the Alcazabar, after finishing Nasrid Palace and end your Alhambra tour with Generalife. Retain your ticket as it might be checked at major sites.

Going up to the watch tower at Alcazaba

What to see at Alhambra

Alcazaba – It is the site of the original 13th-century citadel. The Watchtower or the Torre de la Vela is its highlight. Climb the winding staircase to the top for sweeping views of Granada city.

Charles V Palace or Palacio de Carlos V – A signposted path from the entrance pavilion leads to the Charles V Palace. There are a few religious buildings en route. These are –

Nasrid Palace or the Palacios Nazaríes –

Leave the Partal gardens by a gate facing the Palacio de Carlos V, or continue along a path to the Generalife.

Alhambra with Children and other tips

Yes, though a few things must be kept in mind before visiting Alhambra with children. Strollers are not allowed inside Generalife or Nasrid Palace. Free baby carriers are available for Alhambra visitors and the staff help adjusting them. Keep in mind that you need to dedicate at least half a day to explore Alhambra to the fullest. There are not many dining options inside the complex and the best bet is Alhambra Parador hotel. There is also a kiosk and a small vendor next to the Alcazaba. Stock up on light snacks and water, especially if you have just started the tour.