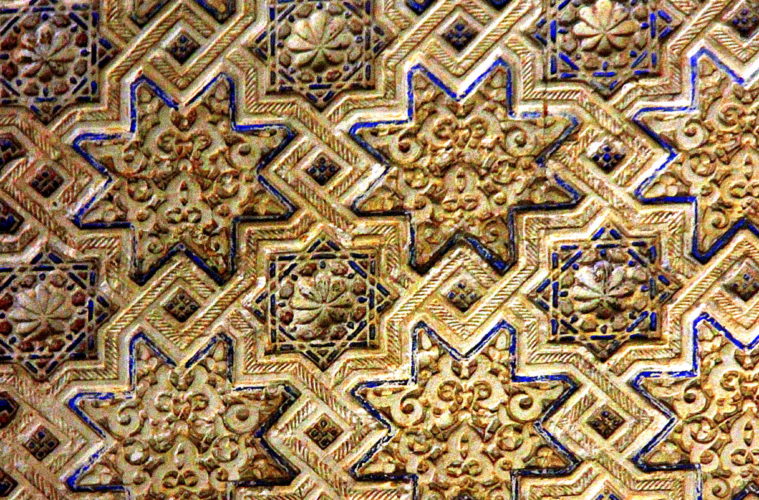 Secrets of the Nasrid Palaces, the last paradise of the Andalusian Moors

“Dale limosna, mujer. Que no hay en la vida nada como la pena de ser ciego en Granada.” (“Give him alms, women. For in this life there is nothing so pitiable as to be blind in Granada.”) These words are as true as the sun and the moon. Granada is one of the most beautiful cities in Spain and it has the glorious Alhambra. Tucked away snugly inside the safe haven of Alhambra complex, is the magnificent Nasrid Palaces and it is one of the loveliest places in the world. In fact, Nasrid Palaces entice its visitors gradually and after a rather plain entrance, the intricate interiors leave one speechless. The palace of the Nasrid sultans is like a sweet wine, which begins with a soft tantalizing note and eventually builds up a powerful intoxication. Thus, it must be a real shame to be blind in a place as magnificent as this, because sometimes (and not often enough), mankind creates something as magical as the Nasrid Palaces or the Alhambra in general.

The view from the Nasrid Palaces

The lavish Nasrid Palaces are the epitome of Islamic art

If there is one thing which strikes a visitor at the Nasrid Palaces the most, then it is the presence of intricate details. The Nasrid Palaces are one of the most decorated and lavish royal residences of the medieval times and the quarters are heavily embellished. Ceramic mosaics, plasterwork, and carved wooden ceilings all profusely decorated are the main architectural features of Nasrid Palaces. This taste reflects the Islamic tendency to cover all surfaces with complex ornaments and enhance them with subtle light effects, carpets, curtains, and hanging textiles. Though today hardly any of the carpets or textile hangings remain, the plasterwork can still be seen and research is going on to decipher the calligraphic messages on the walls of the Nasrid Palaces. As you move deeper into the Nasrid Palaces, you have a distinct feeling of being inside an elaborate poetry book or a puzzle which gives clues through beautifully written words and phrases.

You may also like: A guide to Alhambra in Spain

Elaborate plasterwork covers almost every single surface of walls, arches, vaults, and ceilings of the Nasrid Palaces. Done in vivid colours, the Nasrid plasterwork is almost textile-like in its appearance and there is an overwhelming interconnection and/or superimposition of different ornamental patterns like calligraphy, geometric lazo, ataurique, and mocarabes. Nasrid masons loved playing with light and colour effects and the results of their experiments are exquisite. While they left some simply whitewashed, others were richly painted with red, blue, green, purple and black combined with gold and silver leaf. The painting technique was also extremely delicate and done in a precise step by step manner; plain background colours, silver or gold leaf on the high relief, carefully executed sgraffito and finely painted miniatures creating exquisite effects. These artisans used traditional pigments and the distinct high degree of fluorescence of the colours was due to the presence of gum arabica or egg. One of the most popular colours, blue was obtained from lapis lazuli, which came from Afghanistan and was an extremely expensive commodity.

Walls decorated with brightly coloured tiles and mosaics are another striking feature of the Nasrid Palaces and these tiles are still popularly used in Andalusia. The maze-like corridors of the palace feel like one long stretch of colourful textile as the tiles run lengthwise along the lower half of the walls. Apart from being decorative, these tiles kept the walls cool in summer and protected them from any damage. The tiles were placed with mathematical precision in beautiful geometric patterns. There was a certain uniformity in the choice of colours and these were based on the availability of local materials. Blue came from cobalt, purple or black from manganese, green from iron. red from copper, white from tin, and yellow from lead. In many places, just above the geometrically placed tiles, poetic inscriptions can be found and at the top, furthest away from the ground, Koranic quotations appear.

You may also like: The beautiful city of Esfahan in Iran

The star-burst ceiling of Nasrid Palaces

Nasrid Palaces decorations are all about mathematical precision. My favourite part of this magnificent complex of palaces is the starry ceiling which is made of cedar wood pieces set in an intricate design. A few hundreds of artisans must have had months of stiff necks trying to put in place the 8017 multi-coloured panels in diagonal lines which radiate from the center. Symbolizing the seven heavens of Islamic Paradise, this ceiling is decorated with lots of stars. These celestial beauties are painted to shine like mother-of-pearl and there are 8 pointed and 16 pointed stars. The high vaulted ceiling offers dim light which makes the stars glow and ensured cooler temperatures. This room was used as the Sala de los Abencerrajes or the Salon of Ambassadors and the sultan used to receive foreign emissaries here. It is also the legendary site of the murders of the noble Abencerraj family, whose leader dared to have an affair with Zoraya, Abu al-Hasan’s favourite concubine. Here Boabdil signed his city’s surrender to the Catholic kings, thus marking the end of Moorish rule in Spain and King Ferdinand met Columbus in this room to discuss his plans for finding a new sea route to India – which led to the discovery of the Americas.

The starry ceiling of Nasrid Palaces

The Golden Ratio and blood stains of the Lion’s Court

This room is reached through the famous Lions Court (Patio de los Leones). Built in the second half of the 14th century, the architectural style of the Lion’s Court was based on the Golden Ratio. A mathematical ratio, it is commonly found in nature, and when used in design, the Golden Ratio ensures original and natural looking compositions that are aesthetically pleasing to the eye. Made under the rule of Muhammad V, the twelve lions fountain stood in the middle of the courtyard which was supported by columns arranged in a way that they seemed symmetrical from different axes. Stucco ornamentations cover every part of these columns like delicate golden lace and the rust coloured stains at the bottom of the fountain are supposedly the blood of the murdered Abencerraj family.

The very popular Islamic art, geometric lazo can be found abundantly inside the Nasrid Palaces. The Nasrids developed their own distinct form of geometric lazo and they created the square grid, the geometric lazo of eight and the eight-pointed star. These stars served as the central point for bigger compositions called ‘ruedas’ or wheels and the lazo created a geometric composition around the star. The Nasrid floral and vegetal decorations are called the Ataurique. Due to the absence of human or animal motifs, fruits, flowers, leaves, and vines were used as decorative elements. These can be found all over the arches, windows, and filling up spaces between the geometric lazo. In later years of the Nasrid rule, ataurique appeared in more variety of motifs like palm leaves, pine cones, peppercorns and intertwined with calligraphic inscriptions. One of the most stunning ceilings of Nasrid Palaces is at the Hall of Two Sisters. It features a fantastic muqarnas or mocarabe dome with a central star and 5000 tiny cells, reminiscent of the constellations. Known to the laymen as honeycomb design, mocarabe was extensively used in decorating the Nasrid Palaces and can be found on windows, arches, and vaults. During the time of Muhammad V., Nasrid mocarabes became more complex in designs. They were characterized by complicated geometrical shapes and precise mathematical proportions, making them unique in western Islam.

An example of the geometric lazo design

It is nearly impossible to find an inch that is free of inscriptions in the Nasrid Palaces and even some decorative vaulted ceilings have inscriptions on them. There are mainly two types of calligraphic inscriptions found in the Nasrid Palaces and these are Kufic (dry style) and Nashkhid-Thuluth (cursive style). While the Kufic calligraphy was mostly used to refer to Koranic quotes, the elegant cursive Nashkid-Thuluth calligraphy described the functionality of the rooms or beautiful epigraphic poems written by three poets of the Court of Granada, Ibn al-Yayyab (1274-1349), Ibn al-Jatib (1313-1375) and Ibn Zamrak (1333-1393). The calligraphic engravings also boast of conquests and other feats of the Nasrid sultans and the most common engraving is the Nasrid motto, “Wa-la galib illa Allah” meaning “There is no greater conqueror than Allah”. There are also plentiful references of the words “happiness” and “blessings” with a brief mention of the sultan. Phrases such as “Rejoice in good fortune, because Allah helps you” or “Be sparse in words and you will go in peace” echo through the palace walls. Art historians have recently understood the fact that the Nasrid Palaces decorations were used vehicles of political propaganda and these messages served as reminders of the authority and power of the sultan.

The epigraphic poems which mesmerized the Catholic rulers

After the Christian Reconquest of Granada, the Catholic rulers Ferdinand and Isabella took up residence at Alhambra. They started a ruthless campaign to purge Muslims from Spain and even went to the extent of converting mosques into churches. However, they too, perhaps impressed by the beauty of Nasrid Palaces or intrigued by its overwhelming details, did not damage the engravings on the walls. Instead, they hired translators to study the inscriptions and document them from every nook and cranny of the palaces. This effort is still ongoing and some of the loveliest verses found on the walls of the Nasrid Palaces are by the acclaimed Islamic poets Ibn al-Khatib and Ibn Zamrak. One which appears on Hall of the Two Sisters describe the place a garden: “Moreover we do not know of any other garden/more pleasant in its freshness, more fragrant in its surroundings,/or sweeter in the gathering of its fruits…” wrote Ibn Zamrak. The ceiling represented heaven through these words, “The hands of the Pleiades will spend the night invoking/God’s protection in their favour and they will awaken to/the gentle blowing of the breeze./ In here is a cupola which by its height becomes lost from/sight….”

Poem on the basin of the Fountain of the Lions

«May The One who granted the imam Mohammed
with the beautiful ideas to decorate his mansions be blessed.
For, ¿are there not in this garden wonders
that God has made incomparable in their beauty,
and a sculpture of pearls with a transparently light,
the borders of which are trimmed with seed pearl?
Melted silver flows through the pearls,
to which it resembles in its pure dawn beauty.
Apparently, water and marble seem to be one,
without letting us know which of them is flowing.
Don’t you see how the water spills on the basin,
but its spouts hide it immediately?
It is a lover whose eyelids are brimming over with tears,
tears that it hides from fear of a betrayer.
¿Isn’t it, in fact, like a white cloud
that pours its water channels on the lions
and seems the hand of the caliph, who, in the morning,
grants the war lions with his favours?
Those who gaze at the lions in a threatening attitude,
(knows that) only respect (to the Emir) holds his anger.
¡Oh descendant of the Ansares, and not through an indirect line,
heritage of nobility, who despises the fatuous:
May the peace of God be with you and may your life be long and unscathed
multiplying your feasts and tormenting your enemies!»

*Note: the Imam Ibn Nasr is Mohammed the V. Enjoy the photo essay on Nasrid Palaces of Alhambra in Granada, Spain.