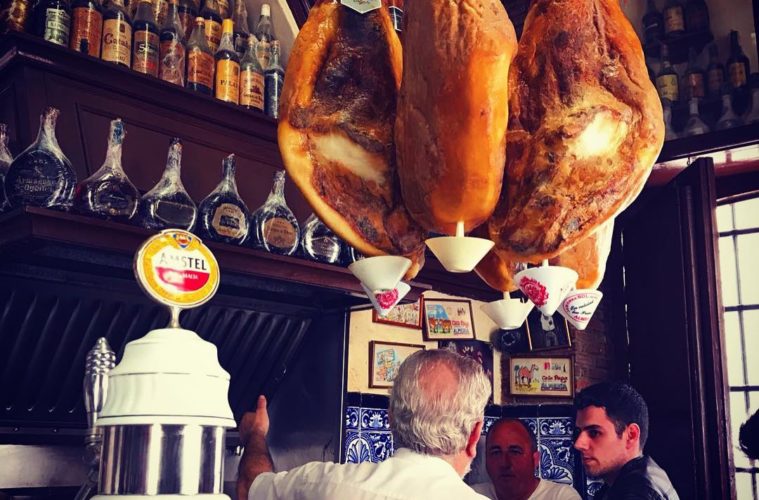 “Let’s go out! Look outside. It’s wonderful weather and we should explore”, said my hyperactive, uber excited husband. “Tarek!!!! We just ate a huge lunch, it’s two in the afternoon, and it’s bloody hot. I am not going out. I am going to take a nap. We are in Spain and it’s siesta time.” This continued back and forth until we agreed upon a short walk around our historic colourful neighbourhood in Almeria city. We were anyway a few steps away from Puerta de Purchena, the most important square in the city and a short walk in the afternoon meant empty “photography perfect” colourful streets. So we went, rambling past mint and rose coloured houses, with the honey-hued Alcazaba looming above us. The sky was impossibly blue, thus making the colours glow and the hot sun made our head reel. We stopped soon exhausted from the heat and massive lunch and by coincidence happened to be right in front of the historic Casa Puga. The old tavern looked cool and we escaped into its dark interiors, away from the blinding sun.

Almeria city to us is a lovely memory of Casa Puga

Little did we at then, that Casa Puga was the oldest tavern of Almeria city and served one of the best tapas in Spain. Nothing about the ordinary newspaper tacked interiors revealed about its reputation and the bar counter seemed lined with locals from the neighbourhood. Huge oily legs of ham (jamon) hung from the ceiling and the walls were lined with bottles of vintage liquor. It had a very busy hum with locals talking, reading newspapers, and eating tapas, while the curt bartenders took verbal orders from the patrons. The manner was informal, gruff, and natural with no time for ‘nonsensical sweet chat’ attitude.

Eat, drink, gossip, and get out is Casa Puga’s motto

We liked Casa Puga and its homey atmosphere immediately parked Akash in his baby car by the huge wooden door and ordered a few sangrias. The ruby red drinks came with hefty platters of tapas and huge chunks of bread, which Akash tucked in happily. Nobody batted an eye at the sight of a baby in a bar and that is the beauty of relaxed fun loving Almeria. It is a historic resort city and the sight of children tagging along with their parents to bars, cinemas or late night cafes is a very common one. Thus, started our afternoon sangria and tapas binging and by three in the afternoon, we were drunk enough to toddle back to our room and sleep.

You may also like: Dordogne in France, thr first stop of our pan Europe road trip

Almeria city has 365 days of sunshine

Almeria city is filled with attractions and year-long sunshine

The rest of our Almeria city routine did not alternate much and we spent a week there eating, sleeping, walking or driving around in our car. Almeria is a beautiful city with eclectic sights and is a perfect combination of 365 days of sun, colonial charm, Arab Quarters, and a baroque cathedral. There’s a lot to see and do here, contrary to many online reviews and read on to know why you should consider visiting this offbeat destination in southern Spain.

Alcazaba is a not to be missed sight of Almeria city

This fortress was built in 955 AD by the blue-eyed Caliph of Cordoba, Abd ar-Rahman III. He was the most powerful Iberian prince who wanted to protect his flourishing silk trade. So he ordered a massive fortress to be built at a vantage point in Almeria, thus transforming a sleeping coastal village into a thriving port city. At its time of construction, Alcazaba was considered to be the most powerful Moorish fort, though the catastrophic 16th-century earthquakes nearly demolished it into rubble. Today, very little of the original Alcazaba remains and the present site is a beautifully reconstructed complex of walls and towers set amidst manicured gardens, ornamental pond, and fountains. There are still some remains of the former palace, ancient streets, and wells and the sunsets from here are the best in all of Almeria city. From this high perch, you can see the Tabernas, Europe’s only desert in the north while in the south the steep hill slopes tumble down to the Mediterranean Sea in a colourful jumble of rooftops of the old Medina quarter.

You may also like: The fantastic Dali Museum in Spain

The third stop of our Europe road trip: Girona, the food capital of Spain

Down the tunnels of the Spanish civil war

During the Spanish Civil War in the 1930s, Almeria city was the Republicans’ last holdout in Andalusia. So it was repeatedly bombed. The attacks prompted the construction of the 4.5 kilometers long maze of concrete shelters under the city. Known as Refugios, the tunnels had entrances in public places or through private houses and were closed after the end of the Spanish Civil War. Refugios were forgotten about until they were re-discovered during road works in 2001. The 1¼-hour guided tour takes you through 1km of the tunnels, including the recreated operating theatre and storerooms. The tours are in Spanish only and cost around 3 Euros per person. Plaza de Manuel Pérez García Tours – 10am, 11.30am, 12.30pm, 6pm & 7.30pm Jun-Sep, 10.30am & noon Tue-Sun, plus 5pm & 6.30pm Fri & Sat Oct-May

Almeria has quite a few interesting museums. The Museo de la Guitarra is one of them. Dedicated to the Almerían guitar-maker Antonio de Torres (1817–92), the museum’s theme is the history of the guitar. Torres is considered to be the father of modern acoustic guitars and there is a gallery featuring prints of guitar-themed paintings, films showing how guitars are made and an interactive zone allows you to listen to music and strum electric and acoustic instruments. Ronda del Beato Diego Ventaja Opening Hours – 10.30am-1.30pm Tue-Sun & 6-9pm Fri & Sat Jun-Sep, 10am-1pm Tue-Sun, 5-8pm Fri & Sat Oct-May Entrance Fee – 3 Euros/person

The central market or Mercado Central of Almeria city occupies a grand 1890s building near the top of Paseo de Almería. Go early to see the locals and the vendors haggling over freshest produce and seafood. Wonderful for people photography, though be aware that many of the fruits and veggies are procured from Almeria’s infamous greenhouses. The rowdier and smaller Plaza de Pavía is liveliest on Saturdays. Visit to taste some delicious local sweets churros and great street photos.

Thanks to Duracell Tarek, we walked through the cramped winding lanes of old Almeria a lot. Since our apartment was near Puerta de Purchena, most of the attractions were within walking distance. Incidentally, Puerta de Purchena was the former gateway to the glorious Arab port city, which was protected by the Alcazaba. Though today, neither the city or much of the Alcazaba remains, the Puerta de Purchena has the Parque Nicolás Salmerón, which is dedicated to the Almeria-born first president of the Spanish Republic. This park was once very popular among Hollywood movie producers and many A-listers from LA have filmed here. The imposing Catedral de la Encarnacion is a short walk from the park and its palm-fringed square can be seen in the Oscar-winning Second WW movie, Patton. The Casa de los Puche is located on the neighbouring Plaza Bendicho and it is the oldest house in Almeria. The Plaza de la Constitucion lies right there, along with its imposing town hall and this square once used to be an Arab market. Next head to Almeria’s sandy beach, Paseo Maritimo which houses the famous Hostal Delfin Verde. John Lennon, during the filming of How I Won the War, stayed here and wrote the lyrics of his eternal song, “Strawberry Fields Forever”. Finish your evening stroll with a sunset promenade followed by a visit to the 15th-century Santiago Church, St. Clara Convent, and tapas at the legendary Casa Puga (Calle Jovellanos 7).

Almeria is in southern Spain. It is a city filled with history, great food, and natural beauty. The region is the driest in Europe thus having the Tabernas Desert, which has featured in many Hollywood films, like Indiana Jones. Recently, Almeria has become a Game of Thrones location, with the Alcazaba, the Tabernas and Cabo de Gata all prominently featured in the series.

How to reach Almeria

Where to Stay in Almeria city

There are plenty of private rooms and hotels in Almeria city. Airbnb is quite strong there. History and Beatles buffs can stay at Hostal Delfin Verde, where John Lennon stayed during his time in Almeria. Other options include staying at Nijar, camping at Tabernas or Cabo de Gata.

Getting Around Almeria city

This is a very walkable city with major sites within walking distance. The Puerta de Purchena provides the best shopping and dining options and the beach is close by. It’s best to hire a car to get out of Almeria city, especially if you are going to the Tabernas, Cabo de Gata National Park, bus station or the airport. Alternatively, you can book a small group tour to either of these places.

Almost any cafe or bar in Almeria city offers tapas around lunch and dinnertime. It usually comes when you order a beer or wine and you can choose from a menu. As a port city, Almeria has some great seafood options. Casa Puga offers more traditional tapas like grilled artichoke, skewers of chicken, grilled prawns, cheese or salty hot pork on warm bread. The best way to enjoy them is while standing at the marble bar, or raciones at a table at the back.  La Mala and La Consentida have great contemporary options.

Almeria city has many street art