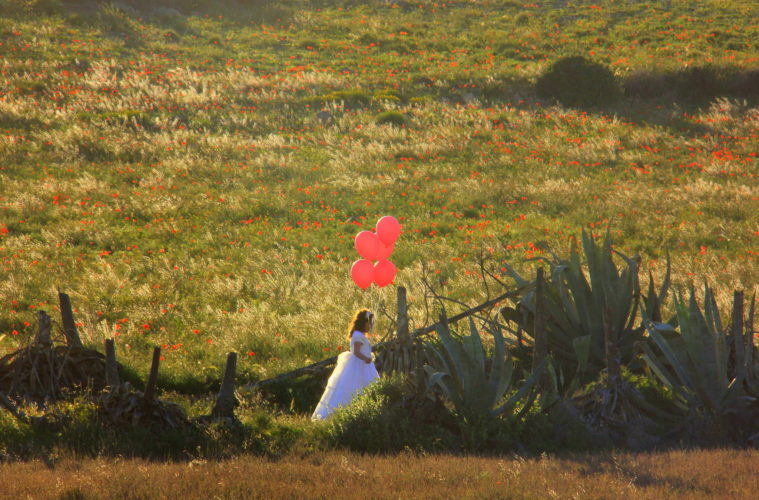 Cabo de Gata National Park is filled with wildflowers in spring….yellow, white, purple, blue, and red. In 2016 spring when we visited there, the southern Spain nature reserve was a sea of colours. The whole park was filled with endless stretches of red poppies, white asphodels, banks of wild aloes, and a brilliant blue sea curled at the edges. Swatches of sandy desert undulated between meadows and hills and agave cacti poked out amidst the flowers. An offbeat destination in Almeria in southern Spain, it was one of our best ‘unplanned’ travel moments.

Tarek and I discovered the Cabo de Gata National Park by sheer chance. We were driving around Almeria city, where we were based for a week and it was a lazy empty Sunday morning. Most of the city was at church, with the other half sleeping and all the shops were closed. The streets were empty and quiet and as Akash napped fitfully in his car seat, we just kept on driving. It was one of those days which seem to have been made for driving and the sun was bright without being too hot. We were looking for a nice beach to have some sand and sun when a wrong turn got us hopelessly lost.

You may also like: Reaching the sunny, remote Almeria in Spain

Suddenly we found ourselves surrounded by a sea of poppies, stunning empty beaches, and gorgeous cacti covered hills. Huge broken hunks of volcanic rocks made up some beach coves and caves and even though the water was icy cold, we rushed towards it for a swim. We jumped out as quickly as we ran into it and spent the rest of the day relaxing on the glistening black beach. Tucked away in the heart of nature, it was the perfect place to unwind and we returned to Almeria with some much needed R&R. Cabo de Gata National Park is Spain‘s last unspoiled wilderness and it includes most of Almeria province’s jagged coastline. The park encompasses 340 square kilometers of dramatic coastline and empty semidesert terrain, which is scattered with remote white villages and isolated traditional old farms. It stretches from Retamar in the west up to Agua Amarga in the east and abandoned mines and bizarre rock formations add more charm to the surreal, empty landscape.

The badlands near Almeria, which has Europe’s only desert

Cabo de Gata National Park’s main hub is San José, a popular resort on the east coast. There are plenty of things to do in the area apart from relaxing on the beaches and the wild terrain is perfect for multi-day hikes. Choose between walking, diving, snorkeling, kayaking, sailing, cycling, horse riding, and 4WD and boat tours are all popular. Most of the coastal villages dotting the park have operators offering these activities from Easter until September, and it makes sense to get guided by a local there. The huge expanse apart from the breathtaking beauty is filled with incredible flora and fauna, Europe’s only desert, and rich human history. Many brave-heart locals have thrived and fought for this space and Cabo de Gata National Park is a delight to explore in depth. For example, only a local can tell you about the secret garden B&B called El Jardin de los suenos in the whitewashed village of Rodalquilar, the legend of Doña Pakyta who stood against developers and saved the region from getting exploited by mass tourism, and the delicious meat of the rare Celto-Iberian goats, which are found there.  And they do say deserts are a hostile environment and are best explored with another person.

Cabo de Gata has some of the loveliest beaches of Spain

The closest airports are Almeria, Malaga, and Granada. The closest train station is Almeria. Public transport is not very efficient in the area, so it’s best to rent a car.

San José is the largest village and the main hub of Cabo de Gata National Park. It has a pleasant bay and can be very busy in summer. Those preferring quieter destinations can go farther north to places such as Agua Amarga and the nearly deserted beaches nearby.