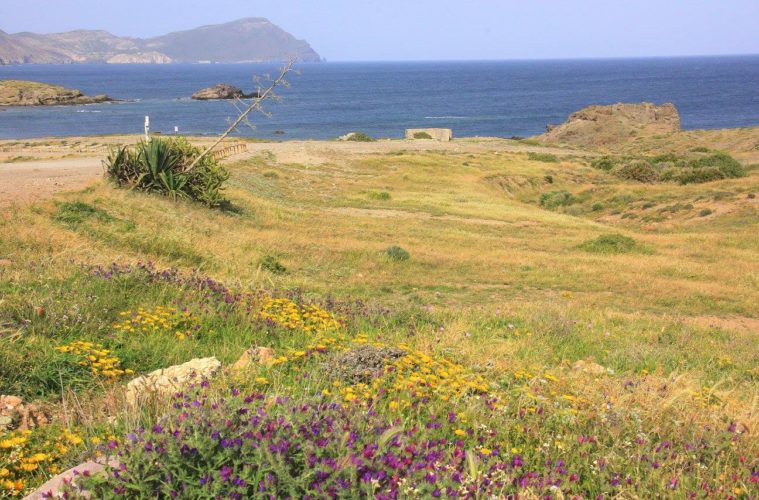 Reaching Almeria, one of the southernmost cities of Spain

Reaching Almeria from Girona was an epic adventure. Nearly everything that can go wrong on a road trip went kaput on that journey and only our car remained faithfully functioning. It did not break down, have a flat tire, or run out of gas even once during that 879 kilometers trip which we covered in 10 hours. Except that, everything was a mess. We left Girona a few hours later than planned (blame it on oversleeping), were grouchy when started the drive, and since it was still dark, could not find coffee anywhere. Now, Tarek and I are both best avoidable when hungry or tired and I am definitely not a morning person (especially when there’s no coffee as a wake-me- up drink). So, inevitably we bickered a lot, which woke Akash up and he bawled his head off until exhaustion made him sleep again. Thus, our Girona to Almeria road trip started on a sour note and we prayed to God to help us survive that journey without a disastrous ending.

Our next destination is the province of Almeria

Traveling to Almeria was across massive Andalusia

Now, when I say an epic journey, I really mean it because we actually crossed from one massive Spanish province to another via huge Andalusia, on that trip. While Girona was in Catalonia, Almeria marked the beginning of our Andalusia road trip, though it is another province by itself. All the three provinces were extremely different in their personalities and to say that the distance was a whopper is an understatement. We drove from the northeastern corner of Spain to the southeastern tip of Almeria, while hugging the coast of Andalusia. The port city of Almeria is one of the southernmost points in Spain and we crossed the old Roman town of Cartagena to reach there. We experienced a beautiful sunrise on the promenade of Cartagena and watched the young golden rays bobbing on yachts moored on the bay. Palm trees, curvaceous hills, and a Roman amphitheater loomed around us and huge street art installations basked in the sunrise. We stopped in Cartagena old town for a traditional breakfast at a local place, perked up our morning moods with huge doses of caffeine, and kissed and made up before resuming our drive.

Traveling across Andalusia to reach Almeria

Things unraveled rapidly after we left Cartagena and our local breakfast left us with severe diarrhea. It’s the worst thing that can happen to a traveler on the road and there we were on a road trip in offbeat Andalusia, in the middle of nowhere, with a baby and runny tummies. In retrospect, the whole episode of growling bellies, abrupt halts, and rushing to the loos seem like a slapstick comedy but at that time, we both felt miserably weak. Only, Akash was in a happy mood and he was thankfully occupied with his toys all the way to Almeria.

This is Cartagena in the morning.

So where is Almeria in Spain and why you should go there?

Almeria is one of the lesser known provinces of Spain and the main reason behind it is the distance. It is far from most popular touristic points and few travelers bother venturing to that remote corner of Spain. That is a pity since Almeria is extremely beautiful and has one of the most jaw-dropping natural beauty. It also has the Desierto de Tabernas, Europe’s only desert, and the gorgeous Cabo de Gata national park. Add to that some of Spain’s most beautiful coastlines and you will wonder why hardly anybody ever goes there. The lack of mass tourism in Almeria is a blessing and we found huge tracts of spectacularly beautiful natural landscapes to be completely empty. Vast meadows carpeted with wildflowers and agave cacti sloped into secluded beaches and snow white mountain villages were photogenically empty.

The controversial ‘Sea of Plastic’ of Almeria

We noticed the remarkable emptiness immediately upon entering the Almeria province and the only sight of human habitation was the endless stretch of greenhouses. Almeria is Europe’s fresh produce backyard and it provides for the maximum amount of fruits and vegetables stocked in the continent’s supermarkets. These greenhouses also bring a huge amount of money to Spain and appear to be neatly tucked away in a remote corner, far from the prying eyes of the international tourists. Locally known as the ‘Sea of Plastic‘, Almeria is Europe’s dirty little secret and it reeks of modern-day slavery bang in the heart of ‘oh so developed First World’. Staffed with illegal migrant workers from Africa and Eastern Europe, these greenhouses are filled with horror stories. Being paid less than 30 Euros a day, living in inhuman living conditions and not even being allowed to use toilets during work, the ‘Sea of Plastic‘ is the sore spot which all of ‘First World’ humanitarian Europe deliberately ignores. However, it looks astonishingly beautiful when seen from afar and resembles something out of a space movie.

The badlands near Almeria, which has Europe’s only desert

The natural landscape of Almeria is also quite lunar in its topography and most of the province is made of wind-blown deserts, dry sandy river beds, golden-hued gorges, and semi-arid scrubland. Fifty years ago, the land was supposedly so barren that only the ‘spaghetti westerns’ wanting to replicate the look of American deserts ventured into its depths. This situation continued even until the 1970’s when lack of water and improper road development left the province untouched. Today, tourism in Almeria is slowly beginning to take off with the majority of visitors being domestic tourists.

The sea of poppies of Almeria

The city of Almeria, however, is a different story from the remote province and the provincial capital is a huge, grid-like traffic-filled urban space. It is a kind of a place which seems to have been made to confuse travelers and we invariably lost our bearings on our first day in the city. This beautiful Spanish port city with a rich past engulfs visitors in a hum of pulsating energy and it emanates an aura of wealth. Most of the swish things that money can buy are available there and Almeria is filled with pricey restaurants, tapas bars, cafes, hotels, resorts, and fashion stores. The locals are fashionably well-off, and the city looks cared for.

Almeria is a very beautiful city

We stayed in a cozy Airbnb apartment in the rambling old city of Almeria and the fortified Moorish fort, the Alcazaba loomed above us like a sentinel. The sea was not too far and old candy coloured houses grew all around us like a concrete garden. It was the perfect place to base for our Almeria province and we stayed there for nearly a week. Taking a break from the road felt nice in Almeria and despite the ugly secrets, it is a place which I can call home.

Views from the Moorish Fort in Almeria