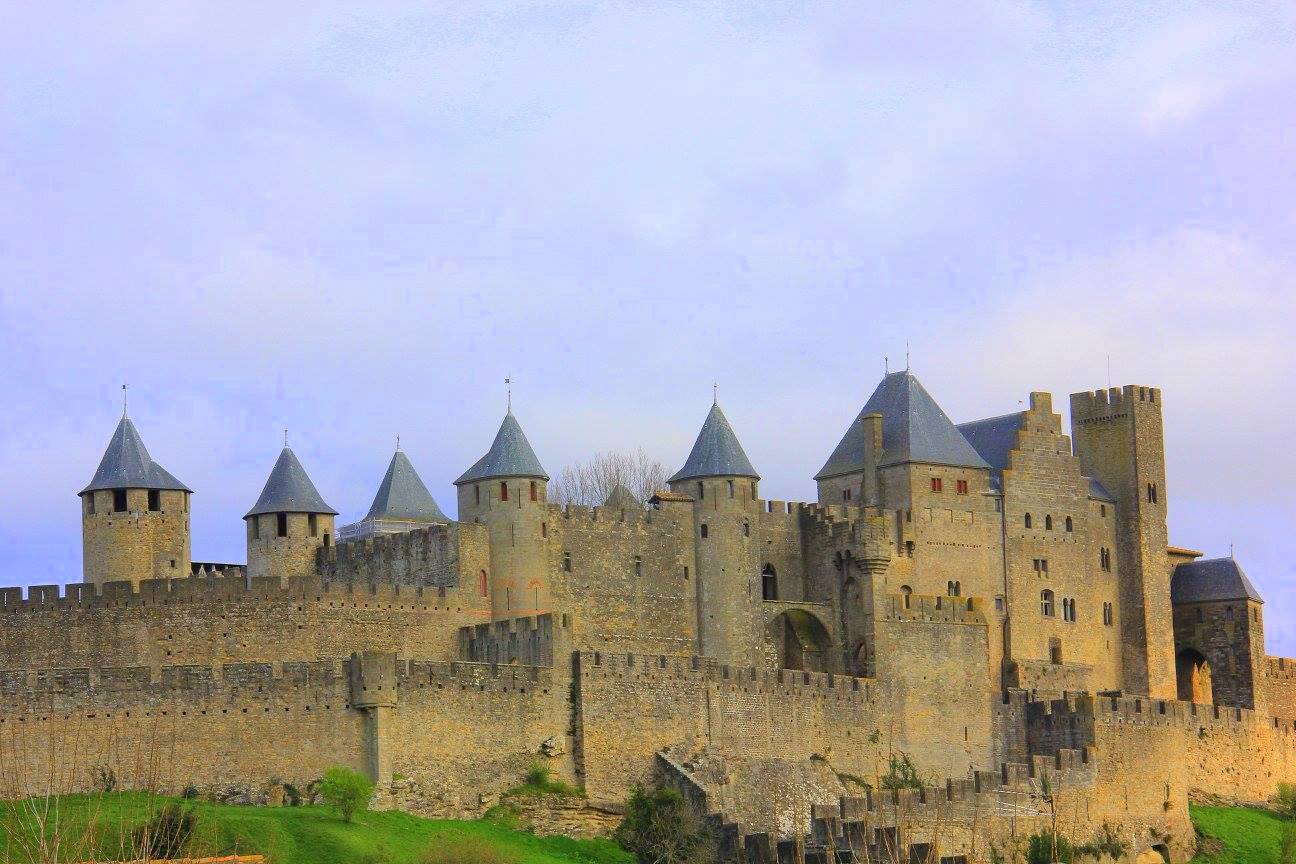 Mixed impressions of Carcassonne in France

We visited Carcassonne early this spring. The medieval city was a stopover in our long Europe road trip and we enjoyed one relaxing day exploring its picturesque corners. The drive from Dordogne to Carcassonne was a long and beautiful one and spring made it prettier. The sky alternated between cloudy and sunny, with cherry trees frothing out in pink flowers. Approaching Carcassonne was dramatic and the south of France showed off its much-famed beauty. We chose the country roads over the autoroutes with “Péage” (tolls) and ended up having a lovely drive.

The empty country roads undulated through the Black Mountain forests and the Pyrenees flanked us on one side. Vineyards stood in neat rows and the sun-dappled countryside was decked with crumbling villas. From the overview, the region looked more Mediterranean than classical French and sunny Spain was just an hour away. Our trusty car purred gently across the flat plains of the River Aude on a narrow highway picketed with two-hundred-year-old plane trees and the old fortified town peeked impressively at different turns. From a distance, Carcassonne fortifications looked like a fairytale castle and it crowned a rocky hilltop. Sturdy battlements, thick wall, and skinny turrets created a dramatic skyline against the blue skies and billowing clouds and in my eyes, Carcassonne‘s charms ended there. The famous French destination welcomed its guests with unassuming dusty streets of the modern lower town and till today, I have mixed impressions of the fortified medieval town.

That does not mean, that we did not have a good time in Carcassonne and honestly if given a chance, I would go back there again. As contradictory, as it may sound, the truth is that I liked our time in Carcassonne, though the fortified town failed to impress me much. The reason was the Dineylandish appeal of its highlight, the La Cité and I hated the rude elbowing rush of tourists. Though being spring, the crowd was supposedly much less than in summer, yet there were enough people to make it seem overrun. A UNESCO World Heritage Site, Carcassonne receives more than four million visitors every year and the old town days are unpleasantly overcrowded. It is one of those places, where a million people are in your picture and you end up photobombing others as well and there was hardly any space for a quiet moment of contemplation. The crowd directly affected the mentality of the local residents and nearly everything was aimed at luring the tourists. This created the Disneylandish slightly tacky interiors of the La Cité and the prices were phenomenally high too.

Carcassonne, however, was worth the visit. Nowhere in Europe, is there a fortified medieval city, which is as exquisitely preserved as the imposing La Cité and it came with a tremendous heritage too. Due to its strategic location of being perched on the rocky outcrop overlooking the River Aude, Carcassonne has been much coveted throughout history. Historians believe that the town may have been fortified even before the Romans started building their walled citadels there and the final touches to the magnificent fortified town are credited to Saint-Louis and his successor Philip the Bold. They completed its architectural glory towards the end of the 13th century and Carcassonne survived virtually intact until the mid-1800‘s owing to the protection of the French military. In the last half of that century, the brilliant architect Eugéne-Emmanuel Viollet-le-Duc took up the prestigious project of restoring Carcassonne and what we see today are the fruits of his hard labour.

Recommended Read: The beautiful old town of Cuenca in Spain

Carcassonne is the best preserved fortified medieval city of Europe

The polarizing effect of Carcassonne

Though we had just one day in the famous French town, we spent most of our afternoon exploring the old town. It was a typical spring day with moody skies, shy sun, and raw winds. A subdued light fell over the fortified old town and it made the surrounding countryside glow softly. La Cité looked ethereal in the moody weather and at some places, time seemed to have stood still. Those were corners overlooking the vast sweep of the countryside or the looming turrets under which the fortified old town lay still like a medieval tapestry. They clashed starkly with the glitzy busy lanes of chintzy cafés, craft shops, and the crowds and made Carcassonne seem like a deeply polarizing phenomenon, which could not make up its mind as to which way to swing. This lead to my travel mood to oscillate too and it shifted swiftly from awe to irritation. Thankfully, the town did not have many attractions to boast of except for the well maintained Château Comtal, and the beautiful church of St-Nazaire and we finished our tour quickly for a hearty lunch at a local restaurant.

Try the local dish, cassoulet…umm, also known as the “bowl of farts”

The cuisine was another letdown factor of the famous fortified town for me and while, normally the French chefs can do no wrong, the food in Carcassonne turned out to be unimpressive. I was particularly excited about the famous local dish of cassoulet and the one I got served had none of the velvety richness of French food. Funnily, it was not the restaurant‘s fault since cassoulet is originally a bland dish of haricot beans and old leftover meat and as I would learn later, is sneakily called by the locals as the “bowl of farts”. After the unsatisfactory meal, we spent the rest of the day, exploring the newer parts of the city, and it was a lovelier and more vibrant than the La Cité. We returned to the old town again after dusk and found ourselves immersed in quiet floodlit magic. There was none of the childish greed for attention of the day and Carcassonne donned its true character of a beautiful medieval town.

You may also like: Beauty of colonial Trinidad in Cuba

Carcassonne is highly popular and touristy

Moments of Middle Ages enchantment and a losing game of Carcassonne

Centuries melted under the night sky as we left the modern ville basse on foot, crossed the seven-hundred-year-old bridge over River Aude and looked up to the Medieval Ages. A magical lit up city of walls and towers and battlements rose like a mirage before our eyes and we walked in complete silence beneath the massively fortified gate, through the double line of enormous walls, into another world in another time. Incredibly ancient houses, shadowy and atmospheric stood in neat rows underneath the massive battlement walls and only the sounds of our footsteps echoed. Suddenly, a motorcycle roared past dashing our hours of enchantment and in one sweep the Middle Ages were gone. After that we ambled along in the steady light of cars coming our way and spent the rest of the evening, trying our hand at the intriguing board game of Carcassonne. Needless to say, I did not have much luck with the other Carcassonne either and Tarek hands down won all the games.

Today, in retrospect, I recall our Carcassonne visit as a very enjoyable time. We loved the beautiful drive to the fortified city, found the ville basse to be a perfect place for hanging out in the evening, and cooked a delicious dinner at our apartment hotel, a habit which we repeated throughout the rest of our trip. Complete with a delicious bottle of local red, oysters, and a large pasta salad, it was the highlight of our day and marked the end of the beautiful first day of our amazing pan Europe road trip.

Located right on the main Toulouse–Montpellier train link, visiting Carcassonne is a must for anyone traveling through the Languedoc region. Though popularly believed to be one city, Carcassonne is made up of two towns and this division is due to the war against the Cathars. Separated into the lively ville basse and the dramatic La Cité, Carcassonne is the second most visited destination in France after the Eiffel Tower. Its highlight is the double-walled and turreted fortress that crowns the hill above the River Aude and from a distance, the fortified old town seems to be straight out of a fairy-tale medieval. Admission to the streets or the grassy lices – “lists” – between the walls is free in Carcassonne and cars are banned from 10 am to 6 pm. A guided tour is required for exploring the inner fortress Château Comtal and walk the walls. The beautiful church of St-Nazaire with its tranquil combination of nave with carved capitals in the Romanesque style and a Gothic choir and transepts, along with some of the loveliest stained glass in Languedoc, is also not to be missed. Climb the tower for most spectacular views over the La Cité.

If you are staying in Carcassonne, then everything is within walking distance. La Cité (Medieval town) and La Bastide (lower town) are only 15 minutes apart from each way.

Though summer is the liveliest time to visit Carcassonne, it is the peak season for tourism there. Go there either in autumn or spring, for quieter moments and beautiful change of season landscape.

Carcassonne was definitely the highlight of our road trip

Avoid Mondays, since everything is closed. In July, catch the Festival de Carcassonne. This a multi-stage festival that runs throughout July with over 120 performances, out of which 80 are free. It is hosted in Medieval City which offers one of the unique backdrops for any festival in the world. Another major summertime event worth catching is the mammoth fireworks display on Bastille Day (July 14). For more information, visit Carcassonne Tourism

Situated in the lovely South of France,

The fortified town of Carcassonne

Has a very volatile history.

Owing to its strategic

Carcassonne has been much coveted throughout history.

Started even before the Romans took over

And war against the Cathars divided

Despite being a polarizing desination

We loved our brief stop at the