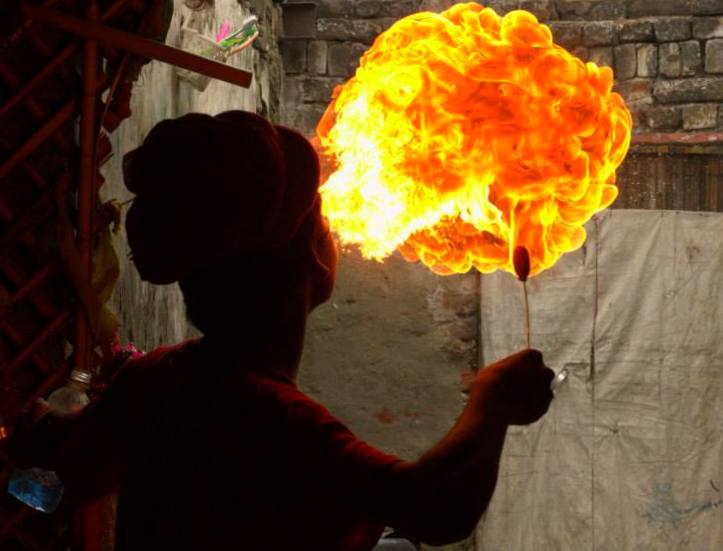 As long as I can remember, I have always objected to poverty or slum tourism and was not overly excited when a friend of mine invited me to the Art of Hope tour in Delhi. It used to be rated as one of the best offbeat tours of Delhi and the 50 USD fee included slum visit along with folk art performances by street artists. The tour took place in the controversial Kathputli Colony in west Delhi and at that time, it was still not demolished for the government run rehabilitation of illegal settlement programme. Housing around 2800 families of magicians, puppeteers, acrobats, musicians, snake charmers and other folk artists, Kathputli Colony was the largest community of street performers in the world and it was quite grungy too. The first thing that struck me was its suffocating squalor and how permanent the whole flimsy housing structures were. Lining both sides of a string of cramped, trash choked alleys,  the squat concrete huts had an air of solidity about them, as if whole generations of families have lived in them. The reality was not very far from this since the illegal settlement of Kathputli Colony has been in existence since the 1950s.

The beginning and the end of Kathputli Colony

It started as a cluster of makeshift tents in an open field in the Shadipur depot area of Delhi and the city had not encroached upon them during that time. The pioneer settlers were puppeteers from Rajasthan, who rendered the colony its name (kathputli is a puppet in Hindi) and in later years, folk artists from Andhra Pradesh and Maharashtra also moved in with them. Along with them came drummers, traditional healers, magicians and a new age of urban development in India. Offices, shops, houses and apartment blocks filled the surrounding areas of Kathputli Colony and it became a black hole in the space of the rich and the privileged. This turned the settlement into an eye sore and a real estate gold mine and in 2016, the illegal Kathputli Colony was demolished forever. The relocated residents were sent to a transition camp until their new promised homes were ready and the magical heritage Kathputli Colony got lost forever.

A paradox in a big city

Today, I often wonder if the Art of Hope tour still runs and whether the street artists of the now gone Kathputli Colony have found the relocation hampering their jobs. They were all talented artists of different tricks and many of them had international acclaim. I had met a troupe of puppeteers who had traveled to France and Japan to display their skills and the best of them had performed for political movers and shakers. I had found the very existence of the Kathputli Colony to be a huge paradox and it was as if the wealthy Delhi city had chosen to ignore its blemish for a purpose. These artists who lived in an illegal settlement without running water, electricity or sanitation performed at lavish weddings and events in which waste, over the top showiness and excess of wealth, were the keywords.

The magic that once worked

Conjuring up images of the duality of Kathputli Colony with words is not easy because magic abounded that Delhi slum. An intense spirit of joie de vivre existed along with extreme poverty and it was a kind of happiness which only art can bring. Imagine open sewers with wallowing bristly pigs, garbage piles which add stench to the air which is already toxic with a staggering amount of vehicle fumes and a constant noise of busy traffic. Dust settled like a sticky finger on your skin there and flies drove you mad. Now think of rabbit warren of basic concrete huts, where laundry dried on the open roofs and flimsy doors revealed veiled women stirring pots on rustic stoves. There were no personal toilets and bathrooms and the putrid smell of urine made one gasp for air. Bright eyed children with matted hair and bare feet ran up to you asking for money, pencils and dazed beggars slept in the open sun. Suddenly rhythmic sounds of drums and lilting voices belted out soulful Rajasthani songs and a little girl produced a bouquet out of a bucket. She used to be followed by smiling adolescent boys who competed with each other in eating fire and a saucy wooden puppet princess pirouetted, sending her skirt flying in the air. She jiggled on strings which have been held by generations of puppeteers and thick laughter used to rise like soap bubbles. Acrobats practiced their balancing skills as the joy of watching these artists happily performing their art turned the eyesore of Kathputli Colony into a very magical place.

The show must go on

I have not followed up with the updates on Kathputli Colony and as strange as my experience of the slum walk had been, the event had somehow slipped my mind until a newspaper report reminded me of it. Here is the direct excerpt from the report, as it had appeared in The Hindu on January 9th, 2017. “Tied to a pole outside a row of empty rooms, two monkeys tug at the ropes around their necks in an attempt to attack the little children teasing them. In front of another row of empty rooms, a group of men practicing on their dhols is interrupted when two kids crash their cycle into the musical instruments. A few meters away, a man barbecues chicken that he will sell later in the afternoon.Relocated from Kathputli Colony, which had been their home for decades, hundreds of artists and performers are slowly adjusting to a new life at a transit camp perched atop a hillock in central Delhi’s Anand Parbat. Comprising rows and rows of rooms, constructed on a secluded piece of land and guarded by a posse of policemen, the Kathputli Colony Transit Camp might remind visitors of a World War II prison camp.”

The article was titled, “Kathputli Colony residents ‘slum’ it for a better future”, so the show must still be going on.

In a grungy grimy

Settlement of Kathputli Colony in Delhi

And bring a lot of joy to the residents.

It used to be the

Largest community of artists in the world.

The colony was a paradox and dual in nature.

In the extreme poverty of the artists slum,

And an intense joie de vivre

For the whole world to see.