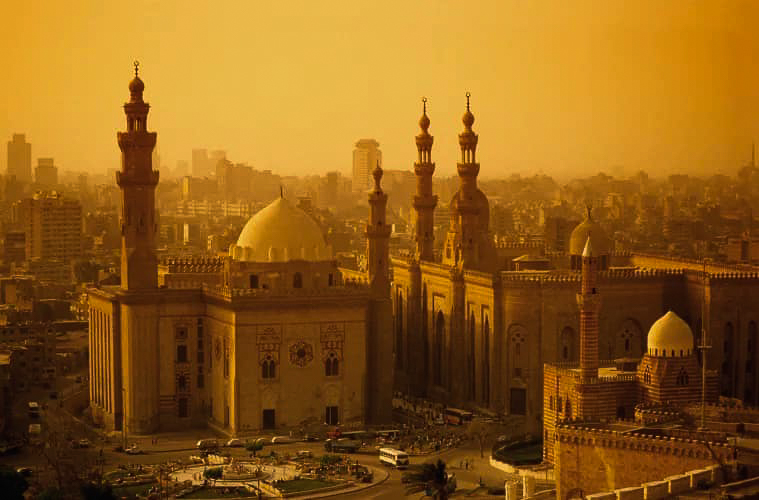 The intriguing Mosque-of-Al-Refaie in Cairo

The most intriguing and interesting part of the Mosque-of-Al-Refaie is its location. Nobody knows why Khoshiar chose to build it bang opposite the massive Sultan Hassan Mosque Madrassa. To think of it, the Citadel serves as its backdrop and no royalty in his/her right mind would want their commissioned work to have a competitor such as the spectacular Sultan Hassan Mosque. Those are hefty ideals to compete against, yet somehow the Mosque-of-Al-Refaie looks like it simply belongs there. In fact, the neat triangle between the Citadel, Sultan Hassan Mosque, and Al-Refaie would look incomplete without Khoshiar’s dream project. A narrow open passageway separates the two gigantic mosques and they look joined at the hip, in harmony with each other.

Though nobody knows the actual reason, Mosque-of-Al-Refaie is believed to have been planned to complement the older monument. This was part of a trend of the 19th-century rulers of Egypt to associate themselves with the perceived glory of earlier Egyptian eras while modernizing the city at the same time. Thus the Mosque-of-Al-Refaie was built right next to two large public squares and off several European-style boulevards, which were constructed around that time. In her conception of the Mosque-of-Al-Refaie, Khoshiar may have wanted to build a place of worship that rivaled Sultan Hassan Mosque Madrassa in its size and greatness.

The legacy of the Mosque-of-Al-Refaie

The Mosque-of-Al-Refaie was constructed directly on the site of an older mosque cammed Al Zakhira mosque. The older structure hailed from the centuries-old Ayubid era and contained many burial tombs of imams and saints. Just like the Sultan Hassan Mosque which it faces, the mosque of Al Refaie never served its purpose. It was ambitiously named after Sheikh Ahmed Al Refaie, the Sufi leader of Al Refaieya method, though the great man was never buried there or even in Egypt. Many believe that Khoshiar had a dual purpose for building the mosque. It was meant to house the Sufi relics and serve as a mausoleum for the royal family of Egypt. Today, the tombs of Khoshiar Hanem, her son Isma’il Pasha, King Farouk, the last king of this dynasty who abdicated the throne in 1952 and his late daughter Ferial can be found there. Interestingly, the son of Reza Shah Pahlavi of Iran, Mohamed Reza also lies sleeping here in eternal slumber.

The dim comfortable interiors of the Mosque-of-Al-Refaie

A mosque that was completed by the Hungarian Pasha Hertz

Due to political turmoils, the Mosque-of-Al-Refaie was completed in two phases. The original architect of the mosque, Hussein Fahri Pasha died during the first phase of construction and the work which began in 1869 was put to a halt when Khedive Ismail Pasha of Egypt was abdicated in 1880. The main person behind the construction, Khoshiar Hanem herself died in 1885 and the work of Mosque-of-Al-Refaie did not resume until 1905 when the then-current Khedive ordered its completion. He recruited the Hungarian architect Max Herz as the supervisor and in a very ironic way, the original dream of Khoshiar to mingle the ancient with the modern did actually come true. Thus after 43 years after the beginning of the construction, Mosque-of-Al-Refaie was opened to the public on a Friday in 1912.

The ceilings of the Mosque-of-Al-Refaie

Covering an area of 6500 meters, the Mosque-of-Al-Refaie is one of the largest mosques in Cairo. It has a spectacular entrance which is accessed with a broad flight of stairs. A massive doorway envelops you in a serene atmosphere of one of the most sedate, yet loveliest mosques of Cairo. A hush soft light filters through the vaulted ceiling and the walls are decorated with colourful marble. Stunning calligraphy on the walls quotes passages from the Koran and the rest of the embellishment heavily consists of ebony, gilt, marble, alabaster, and mother of pearl. Though gorgeous by all means, Mosque-of-Al-Refaie serves as a sort of antithesis to the Sultan Hassan Mosque Madrassa. While later despite being massive is filled with natural light, the equally big Mosque-of-Al-Refaie is somber in comparison. Its richly decorated dim interiors emanate a mystical aura and you can’t help but feel the magic in the air.

The cavernous interiors of the Mosque-of-Al-Refaie

A hotspot for Sufi pilgrims

It was this intense spiritual aura that drew pilgrims to the site before the gigantic mosque sprung there. The pilgrims believed that a local saint who was buried at that site had magical healing powers and the mosque somehow legitimized his existence. Till today, his moulid is held every year at the Mosque-of-Al-Refaie and it is celebrated with readings from the Koran, Sufi chanting, and tanoura dance. The saint’s shrine which is housed inside the mosque draws wish makers and it is not uncommon to hear devotees singing/confessing/or crying their hearts out to him. In the soft, gently lit silence of the mosque their prayers seem to be heard without judgment and it is a very soul-soothing experience. Strangely, despite this tangible existence of hope, you cannot but feel the somber quality of the interior of the mosque and one look at the tombs of the last monarchs of Egypt and Iran, makes you realize why. At the end of the day, universally humans respond most to one thing and this is love.

The ceilings of the Mosque-of-Al-Refaie