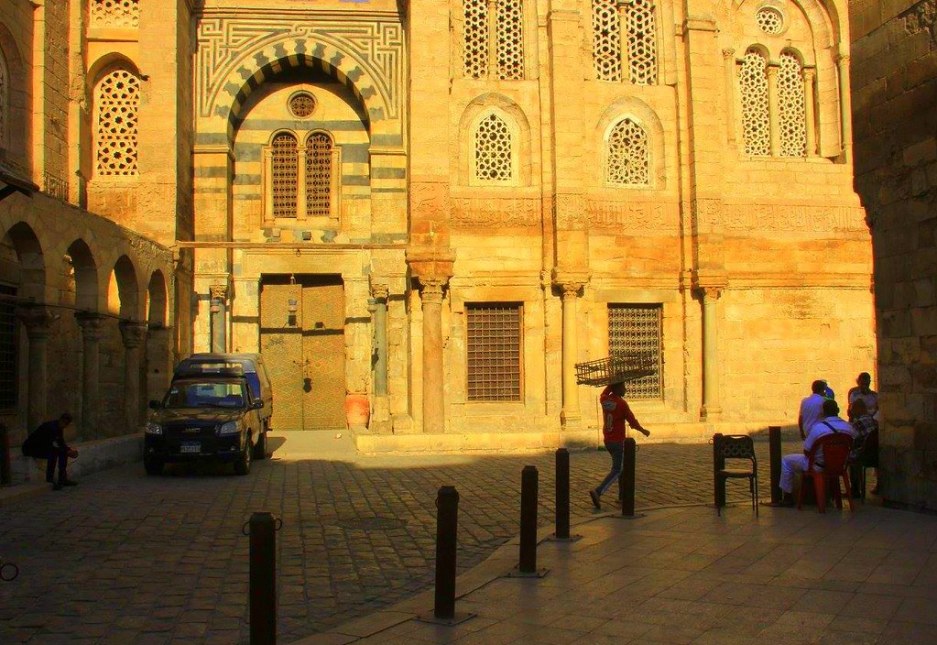 Introducing Muizz Street in Cairo and its importance is no easy feat, but I will try. Living in Cairo is like being surrounded by antiquity all the time. Ancient and medieval monuments dot every niche of this great city and thousands of minarets pierce the blue African sky. Most of these buildings are clustered within Cairo’s heart in the erstwhile walled city of Al Qahira (meaning ‘The Victorious’) and the most beautiful section is called Al Muizz street. A Muizz Street walking tour is like wandering around an open-air museum and it is one of the oldest and longest streets in Islamic Cairo. Named after the Fatimid ruler Al-Mu’izz li-Din Allah, who conquered Cairo in AD 969, Muizz Street, or Sharia Al Muizz as it is popularly known, stretches from Bab Al-Futuh in the north to Bab Zuweila in the south. The Fatimids were Shia Muslims, who sought to cement their interpretation of Islam over the lands of the Sunni Abbasid Caliphate by building a brand new Al-Qahira city. They wanted to rival the prestige of the Abbasid capital, Baghdad, and thus laid the foundations for modern Cairo. Muizz Street was Al Qahira’s grandest thoroughfare of that time and written historical anecdotes and paintings show that the busy street was chock-a-block filled with storytellers, entertainers, and food stalls. Today, though much of the Fatimid capital was destroyed by subsequent Sunni rulers, Muizz Street retained its importance. Many of the palaces, mosques, and monuments that lie on the modern Muizz Street belong to the Ayyubid, Mamluk, and Ottoman rulers that controlled Egypt after the Fatimids.

Today, the Sharia Al Muizz or Muizz Street remains as busy and popular as it used to be in the days of old and offers one of the best walking tours in Cairo. This is owing to the 1997 decision of the Egyptian government to renovate the entire area and Muizz Street consists of one of Cairo’s most photogenic assemblies of minarets, domes, and striped-stone facades. Technically speaking, it is the Bein Al Qasreen section that has gained popularity as a walking tour destination and the entire length of the street has been renovated. During the daytime, it remains vehicle free from (9 am to 10 pm) and this pedestrian-friendly stretch helps the visitors enjoy the beauty of the monuments without the fear of crazy traffic, something that is otherwise impossible in Cairo.

Qalawun Mosque – This is the most impressive complex in Muizz Street.

The two sections of the Muizz Street

Muizz Street stretches about one kilometer and is divided into two sections. The northern part of the street extends from Al-Hakim Mosque in the north to the Spice Market at Al-Azhar Street. It includes the antique markets section, Al-Aqmar Mosque, the Qalawun complex, and several other well preserved medieval mansions and palaces. The southern section stretches from the Al Ghuriya complex to Bab Zuweila and includes the magnificent Tent Market or the Sharia al-Khayamiya in the Gamaliya district. Both the northern and southern sections come with interesting names that denote the wares its shops sell. For example, the stretch of the street that is occupied by small shops selling shishas (water pipes), braziers, pear-shaped cooking pots for fuul (fava bean paste), coffee ewers, and other copper items is called Sharia An Nahaseen (Street of the Coppersmiths). Everywhere, no matter whichever section you walk down, crescent-moon minaret tops punctuate the skyline, and a modern impoverished Cairo jostles for survival amidst grand medieval architecture.

The local market in the Muizz Street area.

Running the length of Islamic Cairo’s central core, from Bab Al-Futuh in the north to Bab Zuweila in the south, Muizz Street is one of the most important places in Egypt’s Islamic history. Apart from the impressive monuments, it also hosts a bustling neighborhood and is home to thousands of Egyptian craftsmen creating wares to be sold in Khan Al-Khalili, which marks the midpoint of the two sections. A walk down this street is exploring the greatest density of significant Islamic monuments in today’s world. When coupled with a Khan al Khalili tour, a Muizz Street walk is an essential experience when visiting Cairo.

Beautiful antiques for sale at shops in Muizz Street

Muizz Street today still contains two of the grand gates that once were entrances to the new city of Al Qahira. The gate of Bab El-Futuh is located to the north of Muizz street and consists of rounded towers containing shafts and arrow slits. The other and more well known Bab Zweila gate lies to the south of the street. Bab Zweila is extremely photogenic and busy and has twin towers that can be accessed via a steep climb. Your walk can begin at any of the gates or from Al Azhar mosque, one of the most important mosques in the world, and end at Bab Zuweila, a medieval gate that is considered one of the most important landmarks of Cairo. Located nearby, Al-Hussein Mosque is one of the holiest Islamic sites in Cairo.

A man inside the Al Aqmar Mosque in Muizz Street

Some of the famous landmarks of Al-Muizz Street are: