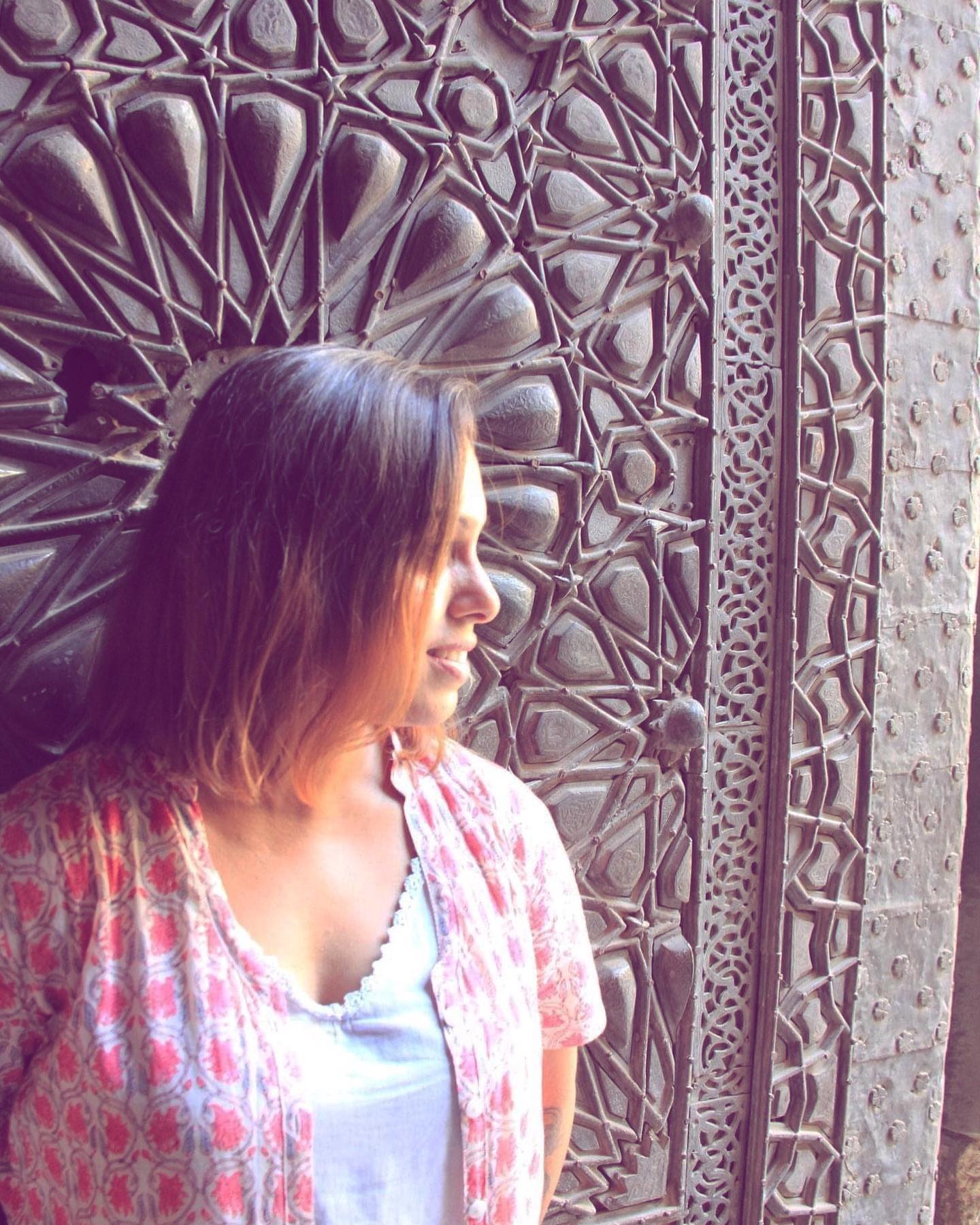 The Sultan Al-Mu’ayyad mosque is one of the less-visited mosques in Old Cairo. It is also one of the most imposing. The mosque reminded one of the great Mamluk era and all that it entailed: power, glory, ruthless religious persecution, and other such entanglements of a powerful dynasty. However, on the day of my visit, this great edifice was empty except for some broken pieces of furniture and a sheesha. The water pipe was standing unused, with its coal gone cold, and the broken furniture, some of which were hastily mended with twine, included a sofa, a chair, and some very uncomfortable wooden benches. Huge circular antiquated ceiling fans whirred lazily, their net covering grimy with years of soot, and the entrance smelled of tom cat pee. The tom cat responsible was a beautiful, fluffy, Persian cat and its spotlessly clean grey fur spoke volumes of its being much loved by someone. It sat on the sofa, purring gently and watching the world go by with solemn big eyes. The cat belonged to the bowab (caretaker of the mosque) and he came rustling up to the entrance as soon as he heard my footsteps. The bowab was a meticulously groomed man of about 40. He incidentally donned a galabeya of the same shade as his beloved cat’s fur and he turned out to be a well-spoken, well-informed guide.

The cat at the Sultan Al-Mu’ayyad mosque

The sultan who suffered from lice and fleas

After, the mandatory entrance ticket sale, he half-heartedly offered the usual cant i.e his services as a guide in exchange for a small baksheesh. I accepted and followed him as he walked through the cavernous entrance of the Sultan Al-Mu’ayyad mosque to begin his strange tale of the patron, a very odd Mamluk king. Al-Mu’ayyad Shaykh was a Mamluk sultan who ruled Egypt from 1412 to 1421. Since he was a Mamluk (a class of warrior-enslaved people who had higher social standing than free-born people and often became rulers), Al-Mu’ayyad Shaykh started his career as the governor of Tripoli under an appointment by Sultan An-Nasir Naseer ad-Din Faraj. He served in his post for 10 years until for being a part of political intrigue, he was captured and thrown into prison. He was kept on the site where the mosque stands today and it is believed that during his captivity, Al-Mu’ayyad Shaykh suffered immensely from lice and the fleas that infested the place. He suffered so much, that he took a vow to transform the infested prison into a “saintly place for the education of scholars” if he ever came into power.

Well, Al-Mu’ayyad Shaykh did come into power in 1412 and the new sultan kept his promise. He spent approximately 40,000 dinars on its construction. “Marble was taken from everywhere”, explained the 15th-century historian al-Taghribirdi in his texts, “even from (private) houses and palaces … The price of marble in Egypt soon rose to an astronomical height for the vast demand and the big dimensions of the mosque. Thus, what regards decoration and the use of marbles, this mosque became the most beautiful ever to be built in Cairo”. Due to the Sultan’s lavish endowments, the madrasa became one of the most prominent academic institutions of the 15th century. A large library was collected, and the most eminent scholars of the day filled professorial chairs. the most famous specialist in Quranic exegesis in Egypt, Ibn Hagar al-‘Asqalani, was installed as a lecturer in Shafi’i jurisprudence. Finally, there was a great opening ceremony for its opening, when Al-Mu’ayyad and his Mamluk entourage came down from the Citadel. According to contemporary reports, the water basin in the middle of the vast courtyard was filled with liquefied sugar, and sweets were offered, along with lectures and much pomp and show.

A sultan who was not above pilfering from another mosque

Incidentally, the Sultan Al-Mu’ayyad mosque was the last great hypostyle mosque to be built in Cairo. It features two very distinct Mamluk specialties: a bent entrance and a burial chamber covered with a monumental dome. The door is a metalwork masterpiece that was reputed to have been pilfered from the Madrasa of Sultan Hasan. It came along with a bronze chandelier, also taken from the mosque of Sultan Hasan against payment of a sum of five hundred dinars (a relatively paltry amount) to the waqf (endowment foundation) of the Sultan Hasan Mosque which, however, did not change the illegality of the deed. Islamic law prohibits the acquisition of land or other properties for a new foundation already endowed upon a previous religious foundation. Once endowed, a property cannot change owners. The historian Maqrizi, however, mentions many such illegal acts connected with the foundation of religious buildings and makes a resigned and bitter comment about “one thief stealing from another.” There was one who was quite obviously not enamoured by the new sultan and his deeds.

The architect of the Sultan Al-Mu’ayyad mosque

The architect of the sultan Al-Mu’ayyad mosque, Muhammad ibn al-Qazzaz was, however, another story. He was a very clever fellow who exploited the mosque’s proximity to Bab Zuweila by using its towers as both buttresses and bases from which the two identical minarets rise. I suppose he saved the sultan a lot of money by using ingenious economical methods such as the Bab Zuweila minaret trick. He was so much in the sultan’s good books, that above the entrance of each minaret is a cartouche in which the architect was permitted to leave his name and the dates of completion, 1421 and 1422. This signature by an architect was indeed a very rare phenomenon in medieval Cairo. I liked the sultan Al-Mu’ayyad mosque very much. For a starter, it was absolutely empty and quiet. From the metal grill windows, I could see and hear the chaos of old Cairo yet inside, the silence inside was as soft as wool. Only gentle softly guttural cooing of the pigeons broke the trance-like aura of the cool marble interiors. The inside lay in the open courtyard style predominant in those days and there was an abundance of rich decoration. The mihrab and the minbar are both fine examples of the style of the period, while the ceilings, which were restored in the early twentieth century, look like suspended carpets.

A beautiful mosque of an ambitious mediocre man

Secondly, I liked its patron, the rather crooked sultan – Al-Mu’ayyad Shaykh. He was an enslaved man who rose beyond his status through sheer determination, will, wit, and unscrupulous methods. A once imprisoned man, he became a sultan, kept his promise, and did his usual round of pomp and piety. The only difference is that despite being a sultan, with the wealth of the legendary Mas’r at his fingertips, he revealed his penny-pinching habits by approving the architect’s brilliant economical tweaks. He also does not disapprove of being dishonest in his dealings with Sultan Hassan wakf and in carrying off that mosque’s properties despite it being against the religious foundation. On the other hand, it is said that sultan Al-Mu’ayyad Shaykh was a pious and oppressive man. His reign was cursed by plague and by his own unusual currency reforms so that when he died everyone was so brutally engaged in choosing his successor that nobody attended his funeral. He is said to have been buried without even a towel in which to wrap his body. That is probably a bit of an exaggeration, however, it has a glorious fable-like ring to it: stuff that we tell children about bad things happening to bad people in the end. In spite of all this, I liked the royal. He was a plotter, a schemer, a thief, a miser, and a complete hypocritical humbug. But he was also a poet, a musician, and overall, a normal human being with a very mediocre personality. I liked him and I could relate to him. It is, after all, the greats that scare me.

The elegant twin minarets of the Sultan Al-Mu’ayyad mosque soaring over the gate of Bab Zuweila are one of Cairo’s landmarks. The mosque is indeed impressive and the patron sultan is quite a character. It is believed that the mosque was built as a funerary complex and for use in Friday prayers. Although the original ambitious plan was never completed, Sultan Al-Mu’ayyad mosque served best as a madrasa for Sufi students. It is also a funerary complex and the finding on the marble cenotaph of al-Mu’ayyad tops it all. Due to the visual style of the Kufic carving, it is believed to be of earlier Fatimid origin and was recycled to be used on this tomb. Now, who doesn’t like a sultan who was into recycling? The entrance portal, dripping with stalactite vaulting, is quite stunning. This mosque can be included in an old Cairo walk that goes around Bab Zuweila and the Street of the Tentmakers. Once you cross the main street underneath the flyover, you can enter the Khan al Khalili area. Address: Sharia Al Muizz Li Din Allah, Islamic Cairo or old Cairo. Opening Hours: 9 am – 5 pm.

The beautiful interior of the Sultan Al-Mu’ayyad mosque

The world outside the Sultan Al-Mu’ayyad mosque

The twin towers of Bab Zuweila