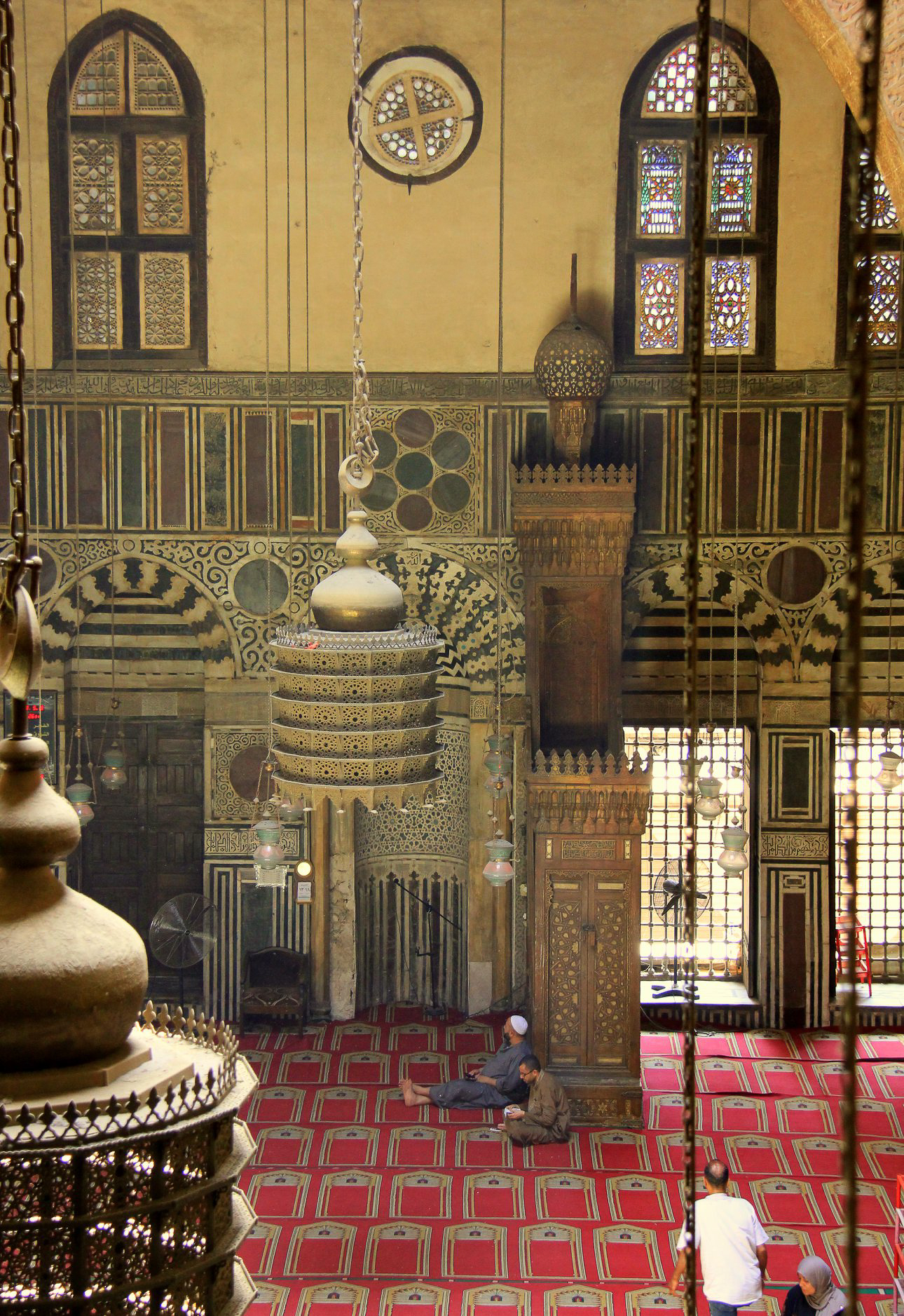 Al Ghuriya Mosque Madrassa complex is one of my favourite places in Cairo. It is located near the intersection of Muizz Street and Al Azhar Mosque. Established by Sultan Al-Ghuri, the last Mamluk Sultan who ruled Egypt for a long period, the complex consists of two major buildings facing each other. On the eastern side of the complex lie the Sultan’s mausoleum, a khanqah, a sabil (water distribution kiosk), and a kuttab (Islamic primary school). The western side includes a mosque and madrasa. Today the mosque-madrassa is functional as a mosque while the khanqah-mausoleum is open to visitors as a historic site.

View from the top of Al Ghuriya mosque minaret

Al Ghuri was one of the longest-reigning Mamluk sultans. He was famous for his military prowess and died while fighting the Ottoman Turks outside Aleppo. His body was never found and until today, his mausoleum lies bereft of the fitful occupant. He was known as a cruel despotic ruler who ruthlessly crushed his opponents or anyone who refused to pay taxes. During his rule, harsh punishments were meted out to the victims and he was much feared and hated. However, there was another facet to this tyrant and sultan Al Ghuri had impeccably fine cultural tastes. He loved music, poetry, and flowers and was a great patron of arts and architecture. Sufis and other holy men were drawn to his aesthetic tastes and he left a huge legacy of fine monuments.

You may also like: BEAUTY OF SULTAN HASSAN MOSQUE MADRASSA IN CAIRO

Entrance to the Al Ghuriya mosque

The magnificent Al Ghuri funerary complex is one of his artistic highlights. It consists of two blocks straddling the main thoroughfare in the heart of medieval Cairo. A covered wooden roof connects both the buildings and shops radiate thickly along their sides. One of the buildings of the complex, the Al Ghuriya mosque breaks many architectural conventions of its times. First of all, unlike other religious complexes, the facades of Al Ghuriya mosque mausoleum are not adjusted to the street alignment. They follow the orientation of the two sides of the complex thus creating a square. It is semi-enclosed in the north by the projection of the sabil-kuttab of the mausoleum, and in the south end by the projection of the minaret of the madrassa.

Recommended Read: IBN TULUN MOSQUE: THE MOST BEAUTIFUL ONE IN CAIRO

Details on the main door of the mosque

Stunning interiors and an oasis of peace

One of the most beautiful parts of this massive complex is the richly decorated mosque-madrassa. Its interiors are embellished with gilt painted wood paneling, black and white marble arabesque designs, decorated high vaulted ceilings, and intricate geometric pavings. Four iwans (vaulted halls) surround the inner courtyard that is always beautifully illuminated by softly diffused natural light. Climb up and for a small tip (baksheesh) you can experience astounding views of modern-day Cairo from the four-storey minaret.

One would believe that such a magnificent monument as Al Ghuriya mosque madrassa would make it to the list of one of the most beautiful places in Cairo. The reality is however that not many foreign visitors even know about its presence. A busy chaotic market surrounds Al Ghuriya mosque and the locals throng there to buy fresh produce, lingerie, Turkish coffee, incense, and fresh beef. Pushcarts and noisy tuk-tuks make walking a bit difficult there and the ever-present thick throng of people is enough to make the claustrophobic shudder. However, the moment you push past the rows of hanging undergarments up the broad steps into the mosque, a soothing hush exists. The cavernous interiors dim the cacophony of the outside and only beams of soft light are filtered in. These and the rows of massive old chandeliers provide the only illumination inside the mosque and you feel like in an oasis there. Funnily enough, despite this lull, the outside rush of life is never too far from you, and from its wide windows and atop the minaret, one can view the grungy, photogenic life of the millions of Cairo’s have-nots.

Suggested for you: INTRIGUING MOSQUE-OF-AL-REFAIE IN CAIRO

View of modern grungy Cairo from the Al Ghuriya mosque

Make sure to dress modestly before entering the mosque and women need to cover their heads to enter the inner courtyard.

Details of the mosque interior

Details of the mosque interior