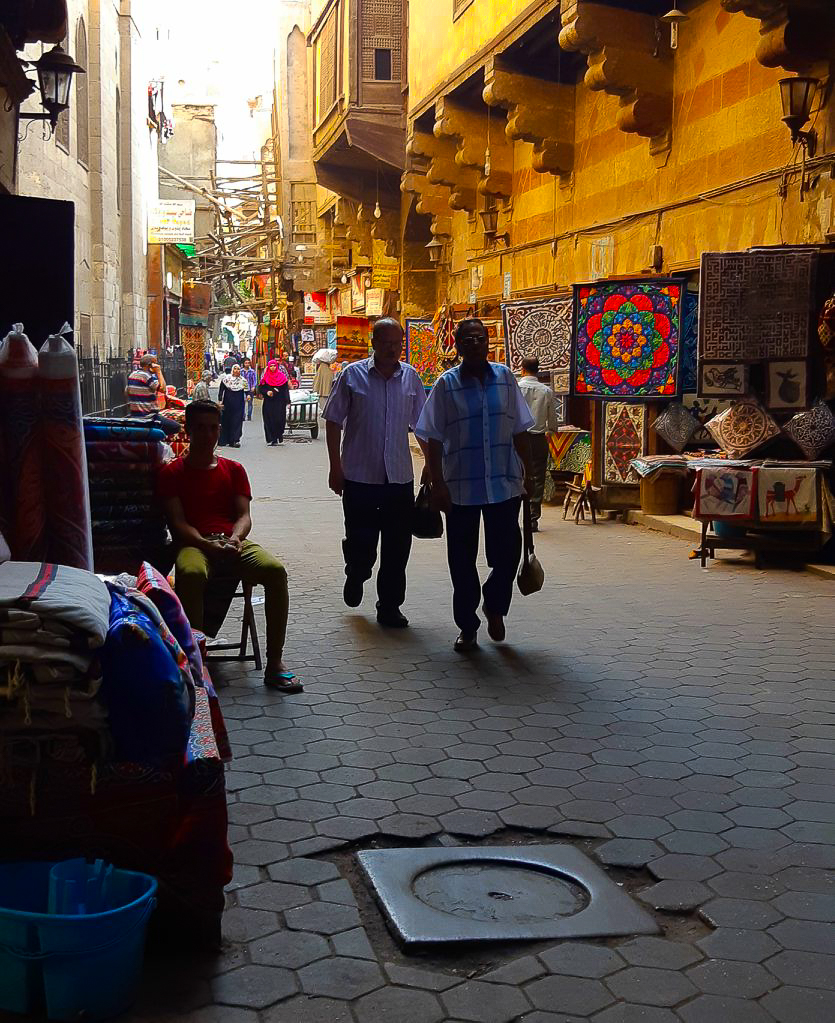 Sharia Khayamiya, the medieval street of tentmakers in Cairo

Sharia Khayamiya is on off-the-beaten tourist track in Cairo. Although it lies in the historic Islamic Cairo district, few wide-eyed wanderers venture there. The result is a pure local experience that is filled with honking autorickshaws, dilapidated donkey carts, lilting Arabic songs on the radio, and shouts and grunts of manual labourers. Dust rises from underneath the feet of hundreds that pass through this historic quarter and people struggling to make ends meet, busily go about their business. There are hardly any ”Come to my shop”, ”Only looking”, or ”What do you want? My shop has everything”. Instead in this overlooked stretch amidst the neighborhood’s famous towering mosques and minaret-topped mausoleums, one finds serious men who are also shopowners looking at you while their nimble fingers embroider beautiful designs on canvas cloths. Welcome to the ‘Street of the Tentmakers’, one of the remaining medieval specialty quarters in Cairo.

Locally known as the Sharia Khayamiya, this quarter takes its name from the artisans who have been plying their trade there for generations. They are tent makers and their specialty product is the bright fabric used for the ceremonial tents at funeral wakes, weddings, and religious feasts. These are called Khayyamiya and they are beautiful handmade appliqué panels, that were initially used for decorating tents and pavilions. The name Khayyamiya comes from the Arabic word khayma (‘tent’) and the Sharia Khayamiya forms part of the Qasabat Ridwan district. It is not easy to find. However, if you exit the famous medieval gates of Bab Zuweila and walk done a narrow, busy street, you will see a kind of alleyway that is covered with a high roof. This is the Sharia Khayamiya and you will know instantly where you are at the sight of small applique shops lining both sides of the alleyway.

It is a very enchanting place if you like gritty photogenic places with character. Beautiful latticed windows on both sides add to the fantastical image and pigeons coo from the old beams of the ceiling. Sunlight filters through softly creating a dim atmosphere and through cavernous gateways on both sides, one can see old stone courtyards. The magic however ends there and the reality of piled up junk, strewn trash and dangerously swerving autorickshaws break the spell. You almost want to escape into one of the old stone courtyards if only they didn’t smell of cigarettes and urine. However, these courtyards belong to the historic houses of Sharia Khayamiya and one can find remnants of the old, traditional lifestyle there. A gnarly old tree here, a beautiful latticed balcony there, and the soulful voice of Umm Khulthum singing her heart out from some treasured record. Once residences of the well-off sections of society, today, these houses provide accommodations to struggling big families. Their traces can also be seen there in form of a table with a broken leg, an unused sheesha pipe, and a rusty child’s bike.

Sharia Khayamiya was aimed at the Mecca pilgrims

The houses in Sharia Khayamiya were built during the mid-seventeenth century by Ridwan Bey al Faqari who held the title ‘Amir al-Hajj’. This pious man built these shops and ateliers with the intention of providing Hajj pilgrims going to Mecca with whatever they might need a.k.a leather saddles and water bags, ropes, and tents. Thus was born the cluster for tentmakers who created hand-embroidered tent textiles that were both beautiful and hardy. The popularity of their art grew (because who doesn’t like something that’s cheap, hardy, and beautiful), and by the nineteenth century, they were also making and decorating decorative urban pavilions used for family and official gatherings. Today, however, only a handful of traditional Khayamiya craftsmen can be found in Cairo and they continue their trade at this historic 17th-century covered market.

A decorative Egyptian art appliqué textile, Khayamiya dates back centuries. Originally made for utilitarian purposes, Khayamiyas used to be placed outside in dry heat and dust and were regarded as replaceable. Hence historic specimens of Khayamiya are rare although some Khedival examples can be seen at several museums including the British Museum. Old photographs also depict Khayamiya and they can be seen in some European orientalist paintings from the nineteenth century and earlier. Literary references to their use have been found in many medieval manuscripts and it is believed that archaeological evidence suggests that textiles similar to Khayamiya have been created and used in Egypt since the Pharaonic era. Despite their historic legacy and usefulness, Khayamiya always remained a humble art and the tentmaker occupation is now endangered. This is owing to competition from imported cheap mass-printed fabrics bearing similar decorative patterns.

How the Khayamiya changed with time

The only hope of survival for the Khayamiya craftsmen comes from the affluent Egyptians and from the tourists who purchase them as souvenirs. Nowadays, Khayamiyas are mostly created for tourists and the craftsmen focus more on producing beautiful hand-made intricate appliqué wall hangings, cushion covers, and bedspreads. Popular design motifs include geometric and curvilinear arabesque patterns, Pharaonic papyrus, and lotus motifs, and stylised depictions of fish and birds. Calligraphic texts from the Qur’an, are often shaped into objects and animals. The more expensive the Khayamiya is, the more intricate designs it will have and some of the tapestries are simply magnificent. Although the Khedival panels made in the late nineteenth and early twentieth-century feature larger blocks of appliqué and wider stitching, the touristic and contemporary Khayamiya textiles are finer and more elaborate.

In my eyes, one of the most photogenic sights of Cairo is Sharia Khayamiya lined with beautiful, colourful hand embroidered textiles hanging from old stone ledges of the shops. The scenes of the tapestries change from shop to shop and while one features arabesque designs, the other showcase beautiful florals, and geometric shapes. The most eye-catching one, according to me, is the one that features scenes of daily life in ancient Egypt, notably farmers, hunters, agricultural scenes, and animals. The production of this style is closely related to the opening of the Suez Canal in 1869, and the development of mass tourism (mostly from Europe and North America). At the end of the twentieth century, panels with birds, butterflies, and fishes also became popular. Anyway, no matter whatever the design these medieval shops may feature, one thing remains the same.

Only 20 Khayamiya artisans are left and why

That constant is the tireless energy of the craftsmens’ fingers sewing small pieces of shaped fabrics on heavy cotton canvases. These men multitask while they sew and one often finds them looking at the passers-by while their fingers work magic with needles and thread. They sit hunched on their wooden trestles and work under the glare of artificial light, producing handmade work that takes hours of labour. The craftsmen don’t seem to mind all that and every day, one sees them toiling over their art which often takes months to get completed. The only incongruity in this scene is when these craftsmen have to get up and bargain for pennies with expensive camera-totting travelers. Then one sees their faces droop and harsh lines showing their tiredness as they have to explain endlessly why their quoted price is worth their time and handmade creativity. The look of resignation comes when they accept a much lower price, yet in minutes, they go back to their stitching and the habit of watching the world go by. I guess that is the penalty for producing art.