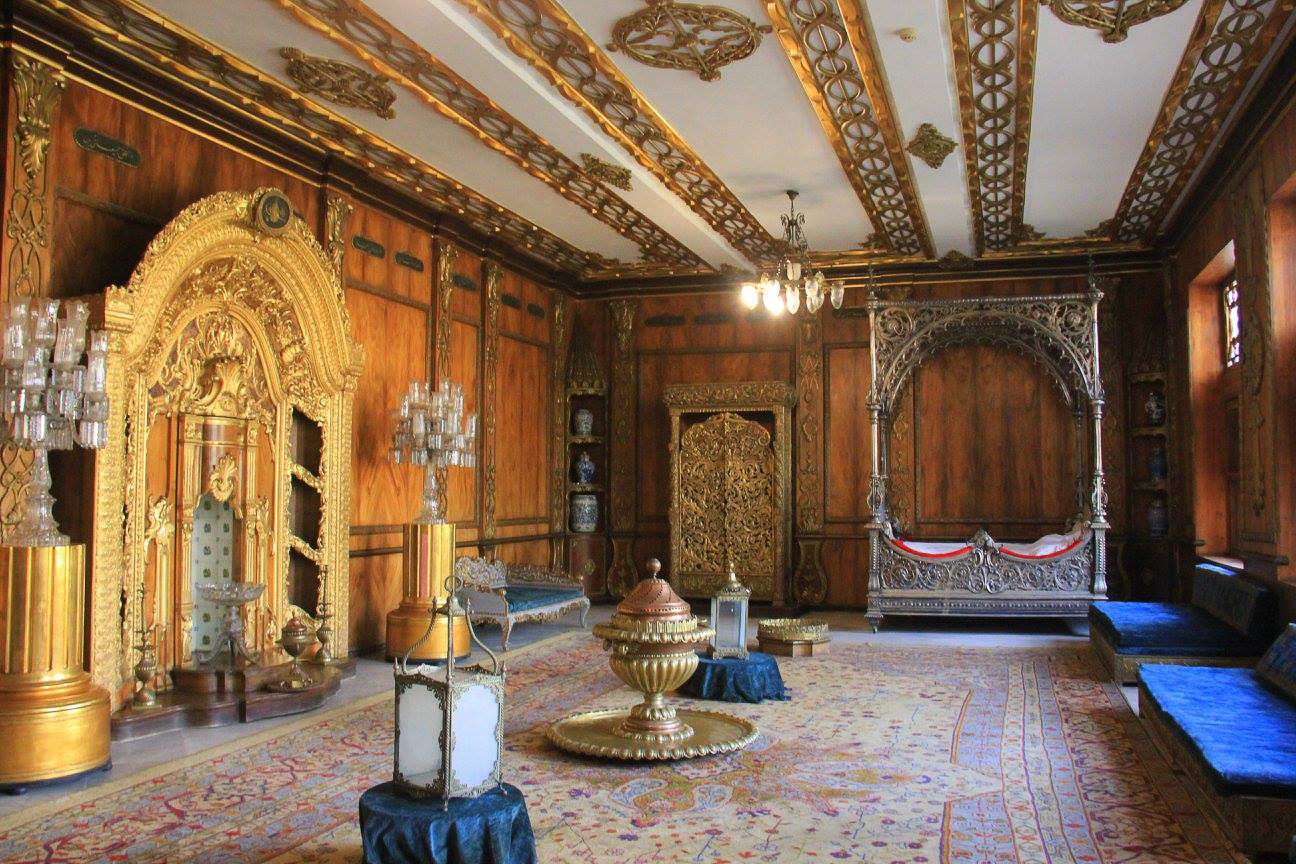 This obscure offbeat gem is located on Roda Island, one of the many islands on the Nile. Though overlooked by most Cairo visitors, Manial Palace offers some of the best experiences in the city: a peep into the 19th and 20th-century Egyptian royal life, beautiful gardens, empty, quiet oasis in the midst of chaos, lovely architecture, and moments of solitude in the middle of a city bursting with humanity. Although the complex is ambitiously called Manial Palace and Museum, don’t expect a staggering amount of opulence and in comparison to European and Western palaces, it looks like a quaint dollhouse set. However, as I mentioned before, Manial Palace and Museum is extremely fascinating and definitely deserves a visit if you happen to be in Cairo.

The inner courtyard at Manial Palace

Originally built in the late 19th century as a royal park with the palace being added later to this space, the Manial Palace was built by Prince Mohammed Ali Taufik (1875—1955), the uncle of King Farouk. The construction took place between 1899 and 1929 and recently, the palace and the adjoining estate have been thrown open to the public as a museum showcasing the settings and lifestyle of the late 19th- and early 20th-century Egyptian royal prince and heir apparent. The entire complex houses 5 buildings and a garden containing carefully collected and nurtured rare plants from all over the world. The patron of the Manial Palace was an art aficionado and the entire complex along with its interiors and architecture is a fascinating mix of Ottoman, Moorish, Persian, and European rococo styles. The theme of barely restrained, yet pleasing opulence can be seen everywhere and the museum is devoted to a collection of antiques that Prince Mohamed Ali assembled before fleeing the country after Nasser’s military takeover.

A small but charming royal complex

There are five major areas of interest in the Manial Palace and Museum complex. These are the reception hall (Salamlik), the main residential palace (Haramlik), the throne palace, the clock tower, and the mosque. The two storey reception palace features the Moroccan style with its walls covered with mirrors and ceramic tiles. There are also lots of gorgeous wood carvings, colourful geometric patterns, and floral motifs along with Quranic calligraphy. The intimate Haramlik also consists of two floors. Its first floor includes a fountain, harem room, mirror room, blue saloon room, seashell room, dining room, fire room, office, and the prince’s library. The throne palace is perhaps the most ostentatious with gilded furniture and the entire upper section being dedicated as the museum. Its loveliest room is called the Aubusson chamber, the walls of which are covered with French Aubusson tapestries. The fascinating clock tower and the mosque feature prominent Moroccan and Andalusian styles and the gardens are a mish-mash of gnarling banyan groves, cedar groves, palm trees, and manicured lawns.

The lush garden of Manial Palace

Manial Palace is an oasis of greenery and peace

The best thing about the Manial Palace is its quiet solitude. The gardens are soothing after Cairo’s soul-crushing noise and traffic and it is one place where you can actually hear birds singing in the city. The palaces are also quirky and sometimes eye-popping in their splashes of opulence overload and at the Manial Palace, you get a sense of seeing a dead star whose long gone sparkle somehow still reaches us.

Details on the exterior

Woodwork on the ceiling

European influenced woodwork on the door

Space in front of the mosque

Metalwork on the door

The French tapestry interior of the Aubusson chamber

This is one of the most relaxing places in Cairo