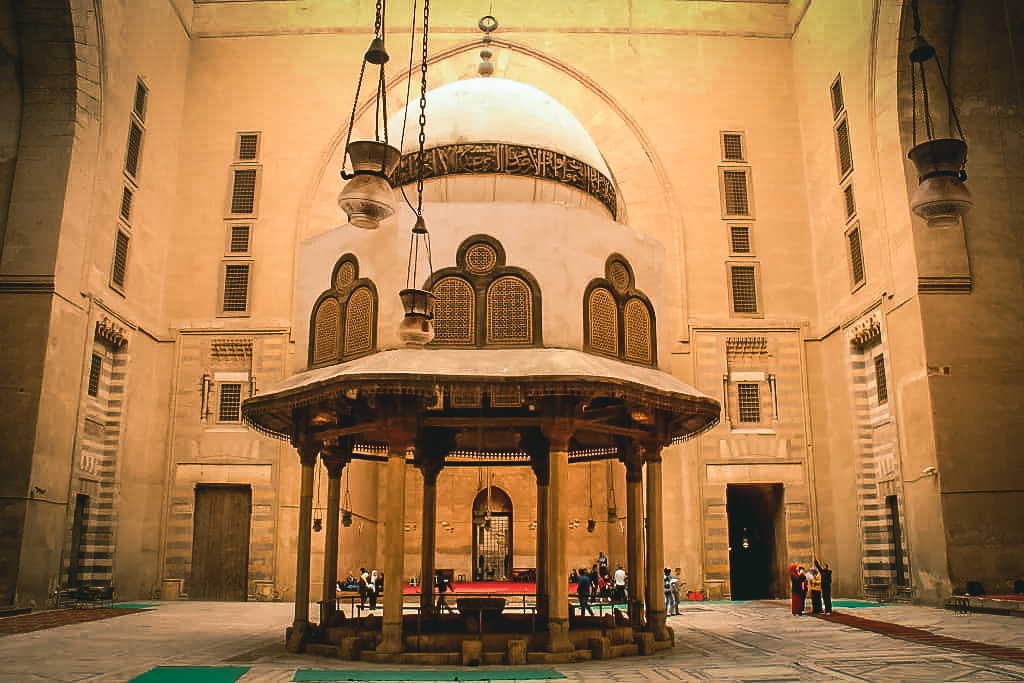 Living in Cairo is like being surrounded by antiquity all the time. Ancient and medieval monuments dot every niche of this great city and thousands of minarets pierce the blue African sky. Choosing a favourite among the city’s thousand mosques is not an easy task, especially since Cairo monuments have many different architectural styles. This is due to the continuous rule of one great dynasty after another and they have all left deep impressions on the city’s landmarks. Most of these buildings are clustered within Cairo’s heart in the erstwhile walled city of Al Qahira (meaning ‘The Victorious’) and in this nerve center of past empires, the Mamluk monuments stand tall. Of all the Mamluk monuments, the Sultan Hassan Mosque Madrassa is the most spectacular and I can never get enough of it.

Considered the finest example of Mamluk architecture in Cairo, the Sultan Hassan Mosque Madrassa is extremely elegant for its massive size. Built between 1356 and 1363, it was built by the Mamluk ruler Sultan Hassan, who had a very volatile personal history. He ascended the throne at the age of 13 and was deposed and reinstated three times. His death remains a mystery and it is a pity that he was killed shortly before the completion of the mosque. At the time of its construction, one of the minarets of the mosque collapsed killing 300 onlookers. The incident set off superstitious rumours of Sultan Hassan’s rule coming to an end and just over a month later, the ruler disappeared never to be found again. The fated Mamluk ruler left behind 10 sons, 6 daughters, and the breathtaking Sultan Hassan Mosque Madrassa. Unfortunately, most historians consider the mosque to be the best (and most important) of his legacies and once you see this beautiful monument, it is easy to understand why.

It is one of the largest mosques in the world

The history of Sultan Hassan Mosque Madrassa is full of intrigue

Sultan Hassan Mosque Madrassa is one of the largest mosques in the world. It is 150m in length and covers an area of 7,906 sqm. Its walls rise to 36m and the height of the tallest minaret is 68m. Prince Mohamed Ibn Baylik Al-Muhssani was the supervisor of the construction of this mosque and the work went on for 4 years. There are many ambiguities regarding the origin of this extravagant piece of art and Sultan Hassan was known for being a spendthrift. It is believed that the construction of the mosque cost 30,000 dirhams every day and it was the most expensive mosque in medieval Cairo. This substantial amount came from exorbitant taxes, wealth confiscated from emirs or ministers who had fallen out of favour, and the state-owned estates of the Black Death victims of 1348. However, the construction was riddled with unfortunate events and the mosque never served its purpose, because the sultan did not end up getting buried there. He disappeared forever sometime during 1356, was probably killed and his body was never found. The public had predicted this when the minaret accident happened and that is why the Sultan Hassan Mosque Madrassa boasts of only three minarets instead of four.

This mosque has a very intriguing history

However, this is an extraordinary work of art

Despite these unhappy incidents, the construction of the massive Sultan Hassan Mosque Madrassa drew a lot of attention at that time and its supervisor was the best in Egypt. This massive undertaking earned his name to be inscribed beneath the sultan inside the mosque and despite the population being depleted by the Black Death, the prestigious project attracted craftsmen from all over the vast Mamluk empire. The ultimate result was a mosque of marvelous beauty and stature. The facade of this mosque is lovelier than its interiors and the tall portal is a work of art. The arched ceiling which is a semi-dome is decorated lavishly with a series of muqarnas tiers each of which resembles a honeycomb. A cool, dark passageway from the portal leads to the brightly lit open-plan cruciform courtyard. It is like a journey from dark to enlightenment and a domed ablution fountain stands in the middle of the courtyard. On four sides of the courtyard are high vaulted liwans or sitting rooms and their cavernous height is accentuated by hanging lamp chains and red-and-black rims.

Sultan Hassan mosque madrassa is a work of art

Going back to school at the Sultan Hassan Mosque Madrassa

Each liwan of the Sultan Hassan Mosque contained a madrassa that specialized in teaching one of the four schools of Muslim religious jurisprudence: Hanafi, Shafi’i, Maliki, and Hanbali. All the madrassas consisted of a central courtyard with its own ablution fountain and three floors which included student residential quarters. The extravagant sultan had lavished his money and attention on this mosque and the liwans feature many splendours of Islamic art. Calligraphy, stucco decorations, gilded inscriptions, and heavily decorated mihrabs or niches. Inside the building, there is also a heavily embellished mausoleum and within it lies buried the son of the supervisor. It is an ironic situation of “Much ado about nothing” and the fact that man proposes and God disposes of. Somebody up there has a cruel sense of humour.

Despite being in the shadows of the Citadel, the Sultan Hassan Mosque Madrassa dominates the landscape. It is the finest example of Mamluk architecture and a site not to be missed in Cairo. The fact that the equally alluring mosque of Al Refai right opposite the Sultan Hassan Mosque makes the visit all the more interesting. Visually the two gigantic mosques stand in a face-off with the Citadel looming in the background. It is one of the most captivating sights you will ever see. Plan a combined trip with the Citadel and/or the Ibn Tulun mosque.

Location – Midan Salah Ad Din (The entrance is at The Citadel side of the enclosure, facing onto the traffic circle)
Genre – Islamic Cairo
Visiting Hours – 8 am – 4.30 pm (This may change during Ramadan)

A face-off between two mosques: Sultan Hassan and Al-Refaie

Beautiful intricate details on the exterior of the mosque

This window is a part of the portal

Details on the minarets of Sultan Hassan Mosque Madrassa

Designs on the semi-dome entrance portal

A dark passageway leads to the central courtyard

The ablution fountain in the middle of the courtyard

It is surrounded by four liwans or sitting areas for madrassas

And stucco details on the panels of the liwans.

How can you not

Love a place as gorgeous

As this place of worship and study?