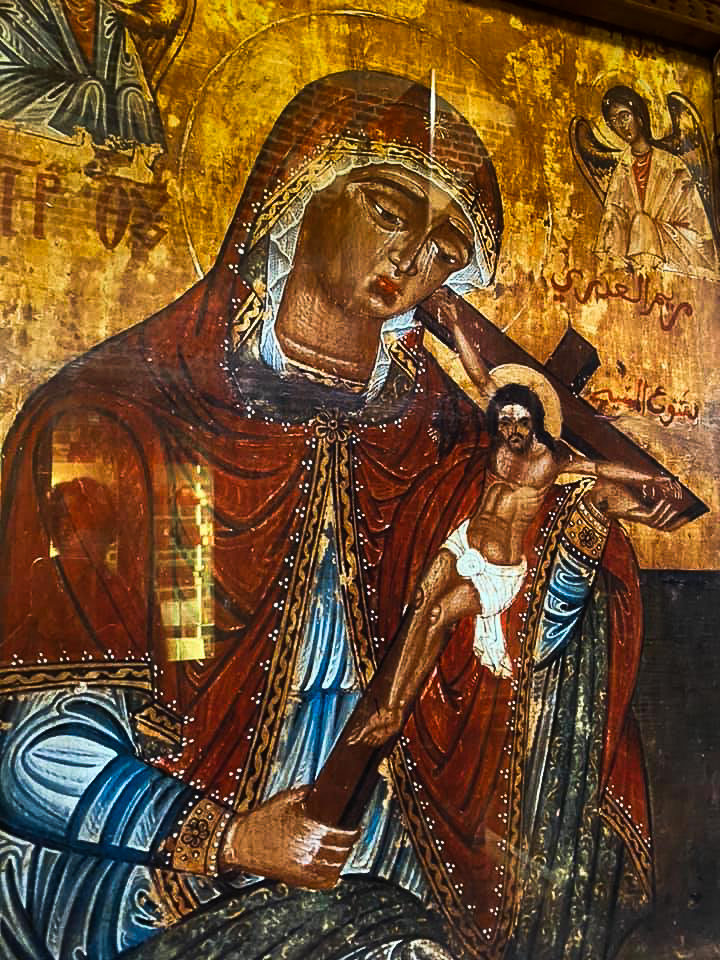 The superb Coptic Museum in Cairo

The Coptic museum of Cairo is one of the city’s least-known attractions and it is one of its best. Founded in 1908, it showcases an incredible array of Coptic art that date from the earliest days of Christianity in Egypt to early Islam. To understand the importance of this museum, one has to have an idea of Coptic Christianity. The Coptic Orthodox is a separate church from the Orthodox Churches of Greece and Turkey and the Catholic Church in Rome. Very early in theological history, it separated from mainstream Christianity owing to a disagreement about the nature of Christ and the Holy Spirit. Under Roman rule, Coptic Christianity was the dominant religion in Egypt and it was very powerful until the arrival of Islam in the 7th century. The unique history of Christianity in Egypt is fascinating and is showcased with pride by the Coptic museum in Cairo.

The stunning ceiling of the Coptic museum

The mingling of faiths in the exhibits

Its collection features Coptic history from its earliest beginnings in Egypt all the way to its rise as a leading center of Christianity in the world. Coptic Christianity traces its origins to a visit by Saint Mark to the city of Alexandria in the 1st Century A.D. Interestingly, the artifacts on display in the museum also show the merging of Coptic art with the prevailing cultures of the eras including Pharaonic, Greek, Roman, Byzantine, and Ottoman. The history of Coptic Christianity records the interaction of several different cultures and religions, including the ancient gods of Egypt, the pagan faiths of Rome and Greece, early Christianity, and Islam. Thus one can notice the similarity of form between the ancient Egyptian symbol of the ankh and the cross of Christianity.

Located beside the remains of the Roman fort of Babylon, the Coptic Museum was the brainchild of Marcus Simaika Pasha, a prominent Coptic figure who was vested in the preservation of Coptic heritage. In 1908, this ardent amateur historian obtained the approval of Patriarch Kyrillos V and he built the Coptic Museum on a plot intended for the construction of a church. The Museum was inaugurated in 1910. It underwent restoration sometime before 1984 and became a State museum in 1931. Simaika Pasha’s continuous efforts in buying and collecting Coptic antiquities and various architectural elements from older churches resulted in a dazzling collection and many families added by bequeathing family legacies and donations. In 1939, the Service of Antiquities decided to transfer all the Christian Antiquities exhibited in the Egyptian Museum to the Coptic Museum, and ever since it has become an attraction to reckon with.

A beautiful wood painting at the Coptic museum in Cairo

The museum building in itself is a beautiful place to visit. It is decorated with gorgeous elaborate wood carvings and elaborate wooden mashrabiyas (projecting oriel windows enclosed with carved wood latticework). The entire site occupies an area of 8,000m2, buildings, and a beautiful garden. Its highlights are undoubtedly its magnificent artifacts and these include magnificently decorated manuscripts, icons, delicately carved woodwork, and elaborate frescos with religious scenes recovered from ancient monasteries and churches. These artifacts include a 2nd- to 5th-century funerary stelae from Kom Abou Billou. The stelae clearly show the transition between Pharaonic and Coptic art, with the first crosses shaped like the ankh, the key of life. There is also a very interesting 4th- and 5th-century sculpture that shows how Christian symbolism was influenced by Graeco-Roman mythology as well as older Pharaonic subjects. Rebirth through the baptism of water is suggested by Aphrodite emerging from the waters on a seashell. One of the most unique artifacts is the wonderful 7th- to 8th-century work of three mice asking a cat for peace. In Egypt, the depiction of animals behaving like humans dates back to 1500 BC. The museum is divided into two floors and upstairs there are two large rooms. One room houses a selection of exquisitely woven and embroidered 4th- to 7th-century Coptic textiles. The room features Nag Hammadi manuscripts, the primary source for Gnosticism, and the oldest book of psalms in the world, the Psalms of David, with two original wooden covers.

Walking through the Coptic museum in Cairo is like strolling through the pages of Egyptian pre-Islamic theological history. One can distinctly see the beliefs and prevailing influences of each era through the exhibits. For example, the 4th and 5th centuries sculptures show subjects borrowed from Greco-Roman mythology endowed with Christian symbolism. Two examples of note are the sculpture of Aphrodite emerging from the waters on a sea-shell, implicitly suggesting re-birth through the baptism of water and the Holy Spirit, and a sculpture from Ahnas showing the marriage of Leda, queen of Sparta, with god Zeus in the disguise of a swan. Behind them can be seen an angel blessing the marriage. From the 6th century, reliefs show a marked change. Artifacts inspired by scripture can be seen more. These include the three Hebrews in the furnace, the Virgin nursing the Infant Jesus, angels holding aloft a medallion displaying a bust of Christ, St. George, and other saints on horseback. The highlight of this period is a majestic ambon, known as “Jeremiah’s Pulpit” that hails from the Monastery of St. Jeremiah in Saqqara. This period also features a lot of frescoes that are inspired by the scriptures. These include the Bawit fresco of the Monastery of Apa Apollo showing Christ in majesty and the Holy Virgin with the Apostles, surrounded by archangels.

Bawit fresco of the Monastery of Apa Apollo

Coptic museum shows off the artistic mastery of the Copts

Apart from the religious importance, the Coptic museum also shows how absolutely talented the Coptics were as artisans and craftsmen. There is a wealth of preserved and restored ancient Coptic textiles that highlight the varied techniques and materials used by the Coptics. Needless to say, the fabrics depict Biblical subjects and scenes from daily life. Another astounding art that was mastered by the Copts was woodwork. The Coptic museum abounds in stunning woodwork artifacts and these include entire panels, screens, altars, latticed windows, and exquisite ceiling covers. Beautifully painted and hand carved, the doors, iconostasis screens, and panels depict episodes from the life of Christ, liturgical objects, altars, crosses, and lecterns. Don’t forget to look up and see the exquisite carved and painted ceilings of the Coptic museum in Cairo.

The easiest way to reach there is by taxi. Since the area is cordoned off for all traffic, it is not possible to drive up to the museum. Get dropoff point at the intersection of Mari Gerges, El-Imam Malik, and Sidey Hassan Al Anwar. From the drop-off point, it is an easy walk down Mari Gerges. Diplomats can drive through the barricades provided they are in diplomatic vehicles and are carrying their diplomatic IDs for inspection.