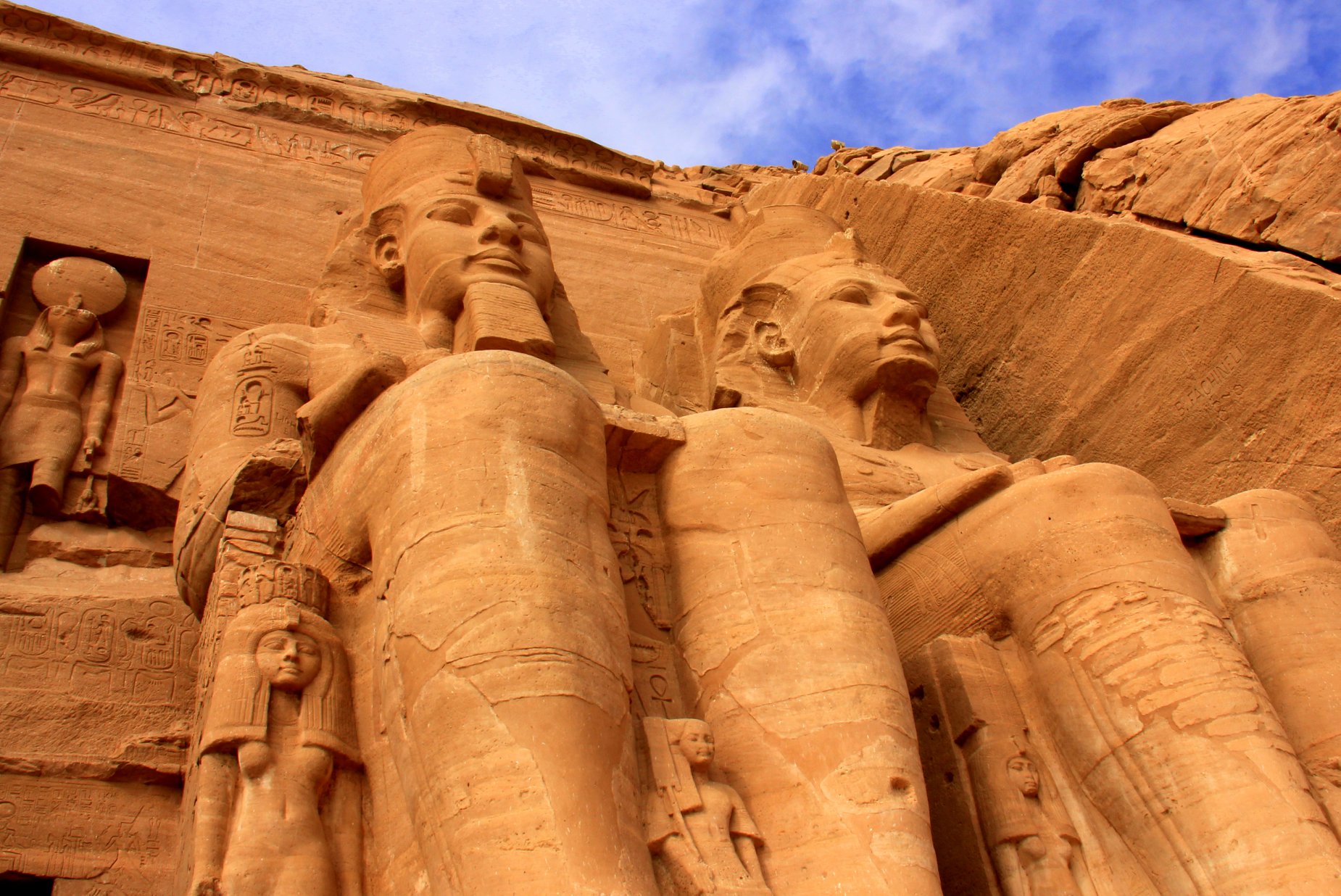 Top Twenty Things To Do in Egypt

Egypt offers many exciting experiences apart from the run of the mill visits to the Pyramids of Giza, Nile Cruise, and Luxor temples. This gorgeous north African country with a distinctly Arab heart has intrepid oases where Alexander the Great left his mark, mountains of Biblical importance like the Mount Sinai (Moses received his Ten Commandments here), and a rich Bedouin culture. Then there is the stunning Red Sea that thrives with marine life and the beautiful blue Mediterranean. Journey out into the dusty desert and visit the oases, scuba dive in the Red Sea, or hike to the top of Mount Sinai. These all make up the list of the best things to do in Egypt and irrespective of whether you journey into the dusty Western Desert, snorkel in the Red Sea, bask on the white sand beaches of the North Coast or trek through the Sinai mountains, Egypt will leave you wanting for more. Here are the Top Things To Do in Egypt.

1. VISIT THE PYRAMIDS OF GIZA

This goes without saying. The Pyramids of Giza, along with the Sphinx and a handful of smaller tombs are one of the most visited sites in the world. Built almost 5000 years ago, the Pyramid complex in Giza consists of the Pyramid of Khufu which is the only ancient wonder that remains intact. This perfect cone of stones is a burial chamber and is a monument that has given rise to many mysteries and conspiracy theories. Plan a trip to the Pyramids of Giza when you are in Cairo and make sure to spend at least three hours there. You can go inside the Great Pyramid, go on a short camel ride, visit the Solar Boat Museum, and see the impressive Sphinx. You can club this visit with the Pyramids of Saqqara and Dahshur. Light and Sound show is available in the evenings at the Pyramids of Giza.

This is one of the most sublime and relaxing experiences in Egypt. Imagine gliding on the sapphire blue Nile past ancient temples, sandy banks, and tiny hamlets where peasants till the land using old traditional methods. Most Nile cruises sail between Aswan and Luxor, with stops at Esna, Edfu, and Kom Ombo along the way. Opt between a luxurious cruise ship that comes with full board services, swimming pool, evening entertainment, and swimming pool, a dahabiya (a smaller wooden ship best suited for slower small group travel), or a felucca (a traditional Egyptian sailboat).

A felucca on the Nile

3. THE EGYPTIAN MUSEUM IN CAIRO

The old Egyptian Museum was very impressive and the new one is nothing short of spectacular. Not only does it contain the world’s largest collection of Egyptian artifacts, but the new museum building is also a visual delight as well. Highlights of a visit to the Egyptian Museum in Cairo include seeing the solid gold mask and the golden sarcophagi of Tutankhamun, the Royal Mummies room, and a vast collection of statues, jewelry, and other artifacts. The old museum is located in Tahrir Square in Cairo and two hours is enough to enjoy it well. A licensed guide is recommended and it can be combined with a visit to the Pyramids complex in Giza.

The beautifully renovated and reconstructed Islamic Cairo is located in the historic heart of Cairo. This marked area is like an open-air museum and contains one of the largest collections of historic architecture in the Islamic world. There are various mosques, madrassas, fortifications, and tombs date back to the Islamic era of Egypt (639 to the early 16th century). Don’t miss visiting the Al-Azhar Mosque, Salah El-Din Citadel, Al-Muizz li-Din Allah al-Fatima Street (al-Muizz), Khan el-Khalili, Ibn Tulun Mosque, and Al-Rifa’i Mosque. Coptic Cairo is also located in the old section of Cairo in the southern part of the city. It is the Christian equivalent of Islamic Cairo and the first settlements here date back to the 6th century BC. The must-see places to visit in Coptic Cairo include the Hanging Church, the Church of St. Sergius and Bacchus, Ben Ezra Synagogue, and the Mosque of Amr Ibn al-As.

A coffee shop in Islamic Cairo

Alexandria is the second-largest city in Egypt and a popular tourist destination for both domestic and international travelers. It is located on the Mediterranean Sea and has enough to keep you busy for a day or two. One can visit Alexandria on a day trip from Cairo and the train connections are easy. The top sights of Alexandria include the Citadel of Qaitbay, the Alexandria National Museum, the Serapeum, Bibliotheca Alexandrina, the Corniche, the Stanley Bridge, the Catacombs of Kom El Shoqafa, and Montazah Palace Gardens.

Hurghada is one of Egypt’s oldest and most popular beach resort towns. Located on the Red Sea, it is a good base for chilling out on the beach or doing short trips to see Luxor and the desert. The best things to do here include snorkeling, visiting the Ras Mohammed National Park, going island hopping to the Giftun Islands, shopping in the Sharm Old Market, and relaxing in Naama Bay and Shark’s Bay.

Sun and sea of Hurghada

7. TABA, THE GULF OF AQABA JEWEL

Located on the shore of the Gulf of Aqaba, Taba and Aqaba are the jewels of the Sinai Peninsula. Taba is the northernmost town on Egypt’s Red Sea coast. Eilat in Israel is right across the border thus making Taba Egypt’s busiest border crossing town. The best things to do here include scuba diving, going to the Fjord Bay, visiting Salah El-Din Castle and Castle Zaman, and doing a day trip to the Coloured Canyon.

8. DAHAB, THE CHILLED OUT HIPPY SPOT ON THE SINAI

Dahab has a more chilled out vibe than Taba and this former Bedouin fishing village is one of Sinai’s best diving destinations. Here you can dive into the famous Blue Hole or relax at the gentle rustic Ras Abu Galum.

The sun-kissed beaches of Dahab

Mount Sinai is a popular pilgrimage site in Egypt. According to the Old Testament, this is the place where Moses received the Ten Commandments. It is a sacred site for Christians, Jews, and Muslims. Located in the Saint Catherine Protectorate in Sinai, it is a land of rugged mountains, hidden Bedouin gardens, Biblical legends, and the famous Saint Catherine’s Monastery (which apparently contains the famous Burning Bush). The monastery is one of the oldest functional Christian monasteries in the world and a UNESCO World Heritage Site. Most people visit here either for pilgrimage or for the sunrise hike to the Mount Sinai summit. There are two access paths to the summit. The Camel Path being wider is easier and the shorter Steps of Penitence is more challenging. It is possible to stay at the monastery.

The Bedouin gardens of Sinai

The Red Sea is one of the world’s top scuba diving locations. With pristine reefs, numerous caves, and shipwrecks, Egypt’s Red Sea is a bucket list destination for many scuba divers. The warm water and excellent visibility make it a delight to explore. It is also the perfect place to learn diving. Marsa Alam is one of the farthest Red Sea coast destinations in Egypt. Located further south of Hurghada, it is famous diving, snorkeling, and kite surfing.

11. EXPLORE THE VALLEY OF THE KINGS

Located in Luxor, this massive necropolis is one of the most interesting things to do in Egypt. A famous burial site. the Valley of the Kings is abounding with stunningly decorated tombs of the pharaohs who ruled Egypt between 1539 and 1075 BC.

Details found at the tomb in the Valley of the Kings

12. THE TOMB OF NEFERTARI IN THE VALLEY OF THE QUEENS

The Valley of the Queens was the burial site of the queens of the pharaohs. The tombs here are smaller and less grand in comparison to the ones in the Valley of the Kings. The only exception is the tomb of Queen Nefertari. It is one of the loveliest tombs in the world and the paintings inside and beautifully detailed and colourful. Though this might not sound very impressive, understand that this tomb was built more than 3000 years ago.

13. QUEEN HATSHEPSUT TEMPLE AND THE TEMPLE OF RAMESSES III

Hatshepsut’s Mortuary Temple in Luxor is a must-visit site. A beautiful monument, it has three terraces, each dedicated to different aspects of Queen Hatshepsut’s life. The huge mortuary temple complex of Ramesses III at Medinat Habu is also very impressive.

Located on the east bank of the Nile in Luxor, Karnak Temple is the second most visited site in Egypt. It is one of the best things to do in Egypt. Here you can find the avenue lined with ram-headed sphinxes, the stunning Hypostyle Hall, the obelisks of Tuthmosis I and Hatshepsut, and the beautiful reliefs on the pylons. The smaller but no less grand Luxor Temple was a coronation site for many important Egyptian pharaohs. It is one of Egypt’s most beautiful sunset points.

15. THE TEMPLES OF HORUS, AND KOM OMBO

This is one of the temples that can be visited while on a Nile Cruise or on the drive between Luxor and Aswan. A magnificent Ptolemaic temple, it is in excellent condition and is a massive intricately decorated structure to explore. The dual Temple of Kom Ombo is another impressive archaeological site that can be visited either on a Nile Cruise or on a road trip between Aswan and Luxor. It also has an interesting crocodile museum.

This is my favourite monument in Egypt. Sitting on the shore of Lake Nasser, the temples of Abu Simbel were built by Ramesses II over 3,000 years ago. You can visit there on a day trip from Aswan. Though not cheap, Abu Simbel is one of the most impressive and unique sites in the world.

17. THE LOVELY PHILAE TEMPLE IN ASWAN

One of the best-preserved Ptolemaic temples in Egypt, Philae Temple in Aswan has a gorgeous setting thanks to its restoration process. With the construction of the High Dam, more than two-thirds of this temple was submerged underwater. In 1960 under the direction of UNESCO, the Philae Temple was dismantled, transported to the nearby Agilkia island where it was painstakingly reconstructed just like the impressive Abu Simbel. Dedicated to Isis, it is a must-visit site in Aswan.

Located in the Western Desert of Egypt, the White Desert is a national park dotted with unique white limestone formations. A visit to the White Desert usually includes a stopover at the Black Desert and the Bahariya Oasis.

Located in western Egypt near the Libyan border, Siwa Oasis is considered to be the most beautiful oasis in the Western Desert. It is also very remote and is 560 km away from Cairo. Alexander the Great visited Siwa Oasis to receive his oracle at the Temple of Amun.

Located next to the Nile River, south of Cairo Fayyoum is a popular getaway for the residents of the capital city. Stay at one of the laidback guesthouses at the Tunis village and visit Wadi El Rayan, a national park that contains man-made lakes and several waterfalls. You can also explore The Valley of the Whales from here. It has many skeletons of sharks, whales, and other fossils dating back millions of years.