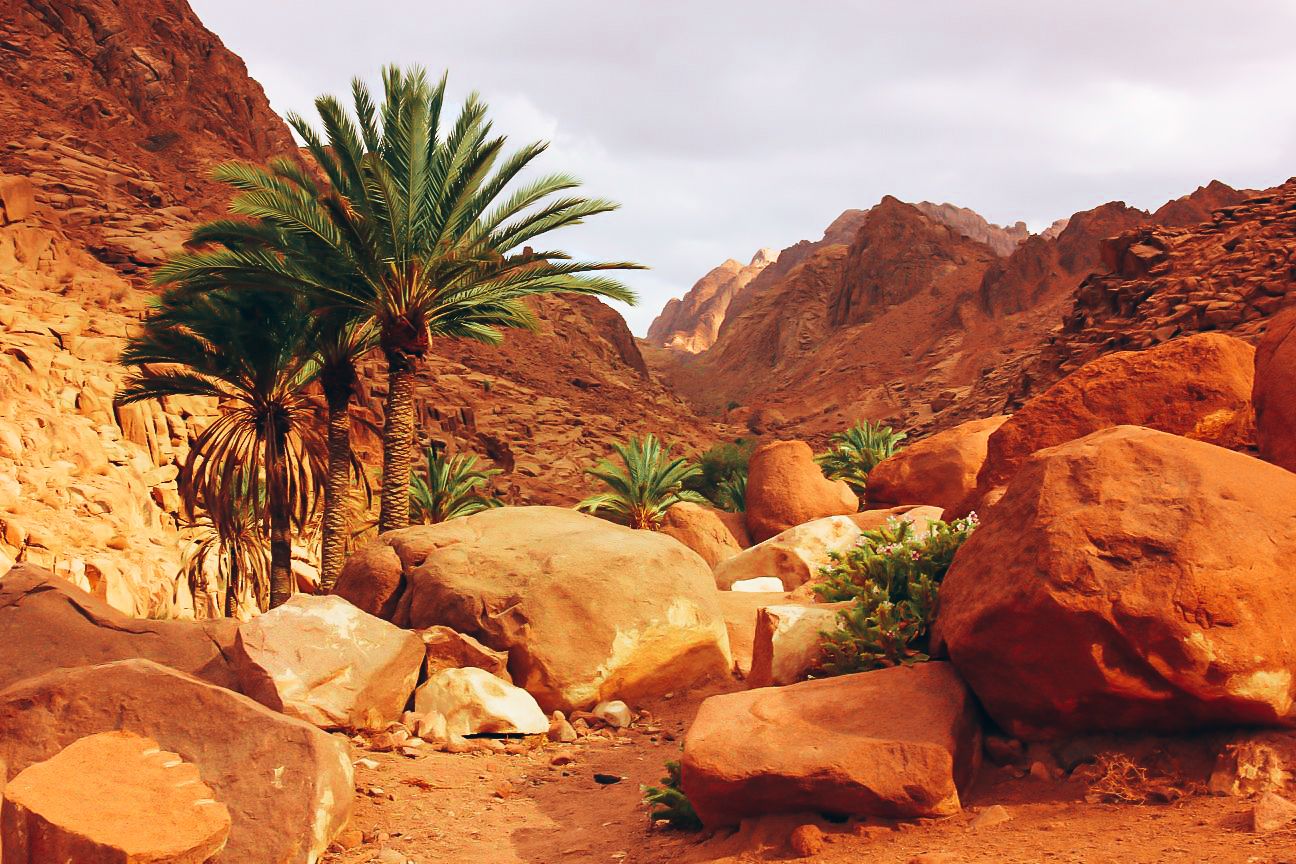 The secret Bedouin gardens of Sinai

The colours of the Sinai are harsh. They are stony, immobile, and seemingly too arid to support any life. All around you are only granite rock faces in tawny hues that are often speckled with deep ochre bands. Only the blue sky breaks this monotony until you climb atop a peak and gaze at the timeless geological folds below. A vast rocky wilderness stretches ahead into the horizon and on extremely clear days you might spot the shimmering turquoise of the Red Sea. Otherwise, on every side, all you see is a tapestry of high crags, rugged peaks, and windswept deserts. You almost sigh at the brooding panorama and turn away, when a glimmer of green catches your eye. Disbelieving, you squint against the soft mountain sun and look again and there they are tucked in secret nooks amidst peaks and deserts; the Bedouin gardens of Sinai.

Slivers of green amidst stark mountains of Sinai

Hidden away from the prying eyes, the Bedouin gardens are a centuries-old legacy of the St.Katherinea area and one has to hike through the mountains, get off the tourist trails, and wander along stony river beds until you discover the lush orchards full of stately cypresses, almond, berries, olive, and pomegranate trees. Hawthorns splash bright spots of yellow there and sometimes an occasional wild rose blooms. The history of these orchards dates back nearly 2000 years when Egypt was ruled as a province of the Roman Empire. Many Christians fleeing from persecution sought shelter in the high mountains of the Sinai at that time. Though the harsh environment was not an easy place to survive for the early settlers, they persevered and soon learned how to cultivate the arid land. They marked the boundaries of their plots and started growing crops like wheat and barley. Over the centuries, they came to understand their environment better, learned how to trap rainwater to irrigate them and identified which plants would thrive the best. With their developing knowledge, their orchards grew bigger and they started protecting them with stone walls, dug deep wells, and grew more exotic trees like mulberry, fig, almond, apricot, pomegranate, and grapes.

You may also like THE BIBLICAL LAND OF ST. KATHERINE OF SINAI

These gardens date back to hundreds of years

When the Bedouins took over as guardians

Over a period of time, Sinai’s Bedouins learned the techniques of gardening too. As Christianity declined over the years, the Bedouins slowly took over this tradition, and soon they became the sole guardians of this fantastic legacy of human survival. They took over the abandoned orchard plots, built many new ones and hundreds of Bedouin gardens appeared over the high mountains of Sinai. Incidentally, it so happened that most of these gardens were in the territory of the Jebeliya Bedouins and that is how they became famous horticulturists. with most in the territory of a Bedouin tribe called the Jebeleya. While other Bedouin tribes preferred to live a more traditional way of life, migrating in the desert with goats and sheep, the Jebeliyas simply adjusted their lifestyle around the orchards. They also migrated and took their flocks up to the high orchards in spring and summer before returning to lower altitudes in winter.

Recommended Read: IS IT SAFE TO VISIT THE SINAI PENINSULA IN EGYPT?

The Jebeliyas, if local legends are to be believed, are the descendants of 200 Roman soldiers drafted by the emperor Justinian from Egypt and the Black Sea region to protect the St Katherine’s monastery. The Christian monks they served showed them how to grow food in a dry climate, and they relied on this secret for survival for generations. The Bedouin gardens of the Jebeliyas are called karms and these are tiny walled enclosures that are lovingly tended by them. The rich harvest of the Bedouin orchards not only helped them live, but they also learned to preserve what their families did not eat. Over the years, they started using the produce of their Bedouin gardens as valuable commodities for trading with the other tribes or merchants on the coast.

Suggested for You: THE INCREDIBLE WHITE DESERT IN EGYPT

But can this centuries-old legacy survive?

Unfortunately, the centuries-old legacy of Bedouin gardens in now in rapid decline. Times have changed and so have the younger generation of Jebeliyas, who are more interested in modern material things. Orchards don’t bring such luxuries and these gardens are expensive time-consuming enterprises. The tradition nearly dwindled towards extinction when the tribal elders decided to make them self-sustainable projects. They diversified their crops and now grow more in demand plants such as khudaree, organic tobacco smoked by the Bedouins. Beekeeping has also started growing as a trend and wild mountain honey is a very much in demand product. Since the tourism in the Sinai Peninsula is again reviving, some of these gardens have become resting places for hikers to visit on day trips or overnight stops on multi-day treks.

Our day trek to the Bedouin gardens

Tarek, Akash, and I spent one day hiking through the mountains and valleys of Sinai to visit Bedouin gardens. With us was Mohamed, a local Jebeliya guide, who works in eco-tourism and during his free time, chronicles natural medicine remedies from his tribe elder, Basha. The tribe elder, who is a retired school teacher, nurtures a Bedouin garden which he doubles up as a homestay and he grows fruits and herbs there. Herbal medicinal prowess is an age-old Bedouin life staple and their medicine men use scores of local plants as analgesics, astringents, diuretics, emetics, purgatives, poultices, salves and tonics. For the Bedouins, Basha explained, the herbal medicines are also used against metaphysical ailments such as driving away bad spirits, evil eye, and effects of sorcery and witchcraft.

The essence of Bedouin life in the Sinai mountains

After an afternoon of hiking through the complex Sinai mountains, we sat under almond trees in a hidden valley. It was Basha’s garden. Flowers grew wildly around us. Thyme, wild mint, rosemary, and sage added to a heady perfume and Basha’s stone hut stood neatly at the foot of a formidable granite rock face. A late afternoon sun cast long golden fingers through the cracks of the mountains and the valley lay basked in soft honey-coloured light. It was cold, and slightly windy, as nearly always the mountains are except for summer and Basha sat brewing Bedouin tea on a heap of burning embers. He was crushing some wild mint when a black-clad Bedouin woman came to visit him for consultation. She whispered and then wailed her problems, and Basha after steeping the crushed mint in the tea started chanting softly. His fingers ran over some beads and dried herbs as he closed his eyes and chanted. The brewing tea released a fabulous aroma and somehow Basha’s chants did not seem out of place in the modern world. It only added to the harmony of the moment and it was then that I understood the secrets of the Bedouin gardens of Sinai; this irresistible combination of natural beauty, human resourcefulness, and the romance of desert life.

This is the essence of the Sinai Bedouins

How to support the Bedouin gardens

Some owners of the Bedouin gardens continue to grow fruit for their families, selling the remainder at a few local shops. If you want to really help these orchards, then ask around in St Katherine for their produce – fruit, tobacco, honey, and herbs. Purchasing them puts money in the pockets of the orchard owners and helps them continue maintaining their gardens. Plus, if you go trekking in the mountains, try sleeping a night or two in one of the Bedouin gardens. Many orchard owners have come together and formed Sinai Gardens. It is a community initiative to maintain, sustain, and develop more Bedouin Gardens in Sinai. You can select walks, treks, and stays with them. For a detailed list of Bedouin gardens in Sinai, check out this website.

The Bedouin gardens of Sinai

Started as a means of survival;

In the harsh environment of South Sinai highlands.

Over the years Bedouins especially the Jebeliyas took over

And thus the nomenclature “Bedouin Gardens”.

For centuries these gardens have nourished

Fed, and even gave produce for trading to the Bedouins

And they had tended to them as a part of their tradition.

Modernization, however, is threatening the existence

Of this centuries-old tradition

And without our support,

So next time you visit Sinai,

Hike to these gardens, buy their produce,

And opt to stay at one of the Bedouin gardens.

Not only will you be in the midst of pure nature,

You will experience the warm Bedouin hospitality that is simply unforgettable.