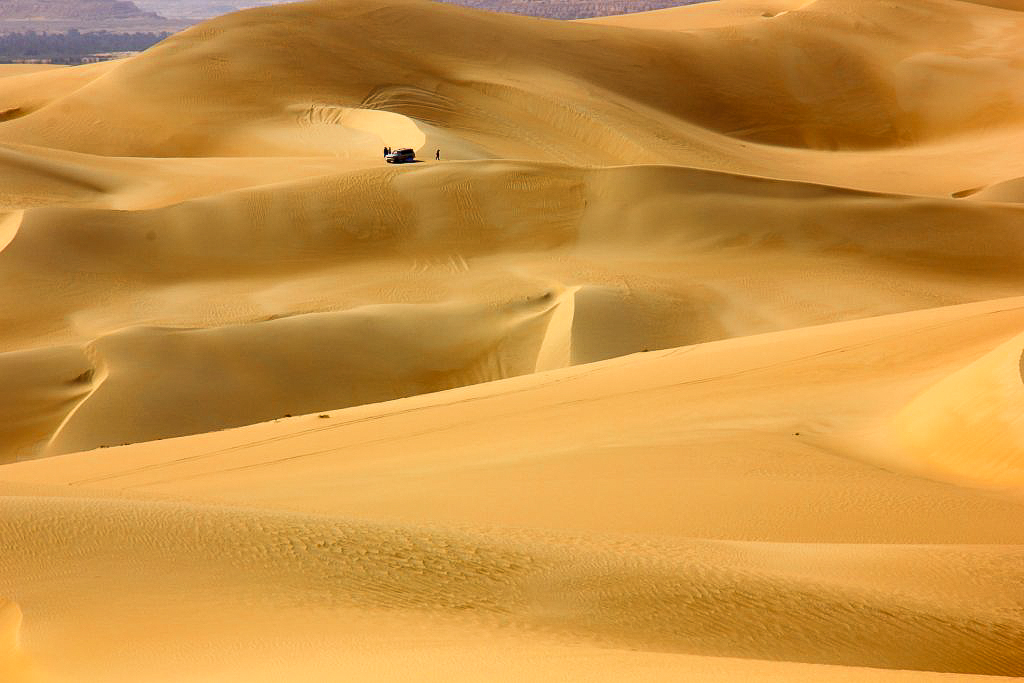 The strangeness of Siwa oasis of Egypt

Once upon a time, a young Macedonian prince travelled all the way to the remote Siwa oasis. He was seeking an answer: a direction that would become his destiny and catapult him as one of the greatest conquerors in history. At that time, as he stood in the cool, dark vaulted interiors of the temple of Amun, breathing intoxicating vapours and his ears ringing with holy chants, he had no idea that his journey to the oasis would pave the way for his future trails. But so it was, and when the soothsayer of the temple of Amun whispered in his ears to head east, he did not once look back but went all the way to India, from where he finally returned home. His trailblazing campaigns changed the face of the world, literally, since he supposedly sired hundreds of mixed racial children and a new chapter in history was made. The year was sometime in 332 B.C and the young prince was none other than Alexander the Great. The place where I am standing now is the exact spot where he received his oracle to head east and it is the revered temple of Amun in Siwa oasis. Though now mostly in ruins, the temple is a spot so steeped in spirituality that the hair on my neck is literally standing and I feel eons of wisdom pouring down on me. Perhaps it is the aura of the historical importance of the place (some places have special powers) or the magic of the Siwa oasis, but I have truly never been another place like this.

Ruins of the temple of Amun at Siwa Oasis

Is visiting Siwa oasis worth the long drive?

There is something about Siwa oasis that says half fantasy and half a magical place gone terribly wrong. The geographically remote oasis has a unique society that is absolutely different from the mainstream Egyptian culture and the local desert traditions and the Berber language of Siwi dominate the scene. It is a place right in the middle of nowhere and the Libyan border is just 50 kilometers away. It is a long drive from Cairo or Alexandria and most people stop overnight by the turquoise waters of the North Coast before going inland towards Siwa oasis. The drive takes a whopping 12 hours from Egypt’s capital city (unless you are flying into Marsa Matrouh) and this downside puts off many visitors. Here a big question looms and that is whether Siwa oasis is worth the trouble?

One of the freshwater lakes outside Siwa oasis

Siwa oasis is what the desert dreams are made of?

The answer in my eyes is a big yes. Imagine this: after driving through the monotonous tawny landscape of the Western Desert for hours, you suddenly see a basin brimming with olive and palm trees, bubbling hot springs, blue desert lakes, and a circlet of mud houses clustered around a fortress. This mirage-like place rises amidst the golden dunes of the Western Desert and you pinch yourself a few times. Is it possible that in a technology ruled world, a place as laidback as this really exists? Donkey carts trundle there, powdery dust rising beneath their hooves and the oasis Siwa men sit and smoke shisha in the shade. The oasis’s shady groves criss-cross around the squat, slouching mud-brick hamlets and the winding dirt lanes hold hardly a soul. Women are rarely seen on the streets and the mud fortress of Shali looms over the oasis-like an enigma. For an instant, Siwa oasis truly seems like an escape from the trappings of modernity; a magic hole into the vignette past. But is it really like that?

Suggested for you: How to spend two days in Aswan?

The modern encroachment upon the slow life at Siwa oasis

The Siwa oasis dream shatters fast and how. The entrance of the town resembles a garden, in which discarded plastic flutters like flower petals. These scraps are stuck on the thorny bushes lining the road and trash lies strewn like unkind words. The sight is a sheer shock, especially to dreamers and believers like me and immediately a pall of doubt falls over Siwa oasis. You look around the lovely place minus your rose-tinted glasses and see the reality of a place that is being exploited by greed. Massive craters on the road jolt you into sensibility and soon a dusty, vague town comes into your view. Awakened from your daydreams, you uneasily swerve past lumbering trucks carrying away precious loads of Siwa salt and mineral water and you stare in dismay at the ugly squat government condos from which dirty laundry hangs like broken wings. However, it is not as dismal as the first shock and your sharp disappointment soon turns into awe as the majestic Shali fortress comes into view.

You may also like: Dahab travel guide and tips

The Shali fortress of Siwa oasis

Built from karshif (a unique material produced by mixing chunks of salt and rock and plastered in local clay), the Shali fortress forms the nerve center of Siwa oasis. The mud monument hails from the 13th century and I first read about it in Bahaa Taher’s 2007 novel Wahet al-Ghoroub (Sunset Oasis). Set in the Siwa Oasis in the late 19th century, the Wahet al-Ghoroub weaves a dramatic, yet magnificent story full of love, betrayal, occupation, and the alienation of a Cairo tax collecter in the remote place, where he was sent as a punishment. The story is full of 19th century Siwa life and gives a rich insight into the closed Shali society. Bahaa Taher’s story set my imagination on fire and I had badly wanted to see the unique mud Shali fortress.

Recommended for you: Is it safe to visit Sinai Peninsula in Egypt?

There are atmospheric homestays inside Shali fortress

The reality was far from my imagination and the Shali fortress of present-day is atmospheric, yet run down. In its heydays, the fortress held a labyrinth of four or five storeys high and had hundreds of residents living within the closed, hierarchy and tradition-bound society. A lot of restoration is being done at the Shali fortress nowadays and the Old Mosque, with its chimney shaped minaret, is closed for public. The disappointment, however, was not severe since Shali’s present-day state was due to three days of rain in 1926. From a distance, the Shali fortress, brooding as it is, still seemed to retain its centuries-old secrets one of which includes the accepted norms of homosexuality among the 19th-century Siwans. This startling discovery was made by a German egyptologist George Steindorff who explored that area extensively in 1900, but his revelation has long been refuted by the seniors of the Siwa Oasis. Make no mistake, today’s Siwa is as traditional as it gets in an Islamic society. Tarek, who visited the area in 1990 claimed that Siwa nights were filled with noisy brayings of male donkeys that were never allowed to mate owing to the fear of allowing the open display of sexual relations in Siwa oasis.

And the rest of Siwa oasis

The rest of Siwa oasis in my eyes is made of lush date palm groves, velvety quiet evenings, night skies crowded with stars as big as solitaire diamonds, donkey carts, Bedouin men in flowy galabeyas, and clusters of ruby red dates that are as sweet as honey. Stark stony hills surround the fertile basin and innumerable tombs of important men of long-gone days fill these hillocks like shelves. Hot springs bubble forth here and there in the midst of the oasis and cool lakes lie in sandy depressions just outside the Siwa oasis town. Calm salt lakes mirroring the blue sky surround the town and the desert is slowly being encroached by ambitious planters who are trying to grow olive trees through drip irrigations. Money is in the air in Siwa oasis and salt miners’ vehicles, army convoys, load heavy trucks, and puttering 4WDs of the locals have broken by the town’s roads into massive gaping potholes. Then there is the ruthless sensuous Western Desert which is as beautiful as a seductive golden siren. And just like a bonafide siren, the Western Desert, throughout the centuries has drawn many men into its depths, only to never let them out from there again. As I stand atop the temple of Amun and stare at the rolling expanse of green palm tracts all around me, I see Siwa Oasis again through the centuries-old eyes of travellers, caravan leaders, Bedouins, and perhaps even Alexander the Great. There is magic in this place and just the sight of this dense fertile emerald in the midst of endless desert is enough to fall in love with Siwa oasis forever.

An afternote on security concerns at the Siwa Oasis

For centuries, Siwa Oasis has been a remote location of Egypt; a kind of gateway to the dreaded Western Desert. The Great Sand Sea officially begins here and the town of fewer than 25,000 residents is just 50 kilometers from the Libyan border. Owing to its geographical location, Siwa has always been a hotbed for traders, caravans, travellerrs undergoing the arduous desert trail, and smugglers. The Western Desert is believed to be teeming with smugglers who carry contraband cosmetics, cigarettes, drugs, weapons, and other things from across the border. It is a dangerous task; navigating the vast uncharted expanses of the Western Desert in the stealth of the night. Nowadays, it has become doubly risky since the Egyptian army has the right to shoot at sight any trespassers who venture into this off-limits territory. It is declared by the army that dangerous terrorists take shelter inside the sandy folds and no visitor, Egyptian or foreigner is permitted to go inside the Western Desert without a registered guide or a local. Despite the off-putting situation, tourism in Siwa continues. Throughout the year this remote location in Egypt keeps seeing a thin, but steady stream of adventurers, prospective investors, geographers, wealthy older foreign wives who come to marry the local men, and dreamers in search of something magical at the oasis. You just need to fit into your niche or simply follow the footsteps of Alexander and let Siwa Oasis take the lead. It is a place unlike any in the world, a law unto itself, and magical too; reminds me that sometimes you just got to have the faith.

The Western Desert is one of

Most geographically savage places on earth.

It is a harsh place,

Unkind but not inhospitable.

Imagine yourself to be a traveller

Who after travelling for months

In the hot sands,

Green, lush, fertile, and full of

Life is different there and

And the place is a law unto itself.

Fitting in is not easy,

Neither is it simple to understand the local Siwans,

But it is true that

Once you have visited Siwa oasis,

You will want to go back