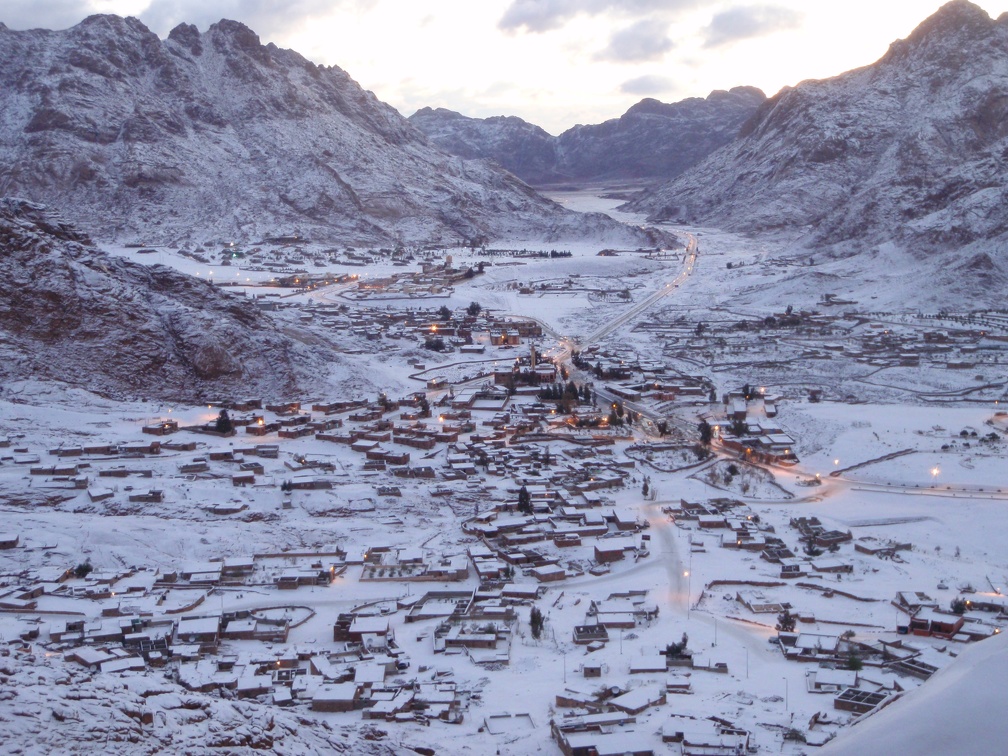 The biblical land of St. Katherine of Sinai

Would you believe me if I told you that it snows in Egypt in winter? Most probably not. The truth, however, is that it does snow in winter in St. Katherine and the photo of a Bedouin trudging through white carpeted mountains is intriguing. Located in southern Sinai, St Katherine’s Protectorate is a region that is famous for a monastery by the same name and in 2004, this National Protectorate of Egypt was declared a UNESCO World Heritage Site. The main “town of St. Katherine”, Al-Milga is a small Bedouin settlement, located a few kilometers away from the famous monastery and the entire area of St. Katherina is naturally stunning. It exudes a spiritual aura that is hard to miss and the Biblical land is important for Christians, Jews, and Muslims alike.

A Sinai Bedouin man in St.Katherine and his camel PC https://www.snow-forecast.com/

The seat of spirituality

The foundations of the three major religions of the world lie there and once ensconced in St.Katherine’s peaceful loveliness, you cannot help but wonder how could such a gorgeous place create the groundwork for some of the bloodiest rifts in human history. The truth is that St.Katherine is an important landmark mentioned in the Koran, the Bible, and the Torah and all the incidents that happened there have been narrated in various versions in all the three religious books. Thus, it is no wonder that the rugged landscape resembling a high-altitude desert seems so pure and the spirituality felt there, is almost palpable. While driving into St.Katherine from Cairo, you pass by many scenes which bear telltale signs of recent troubles in the Sinai, yet the moment you enter the land-locked holy land, all that remains is a deep sense of peace.

You may also like: IS IT SAFE TO VISIT THE SINAI PENINSULA IN EGYPT?

The land of Moses and the Ten Commandments

Most people visit this remote part of the Sinai peninsula only to pay homage at the monastery and/or to climb Mount Moses, though spending a few days more to explore the surrounding region is recommended. The town of St. Katherine is at an elevation of about 1600 meters from sea level. It sits at the foot of the Sinai High Mountains and the venerated site is believed to be the place of God’s revelation of the Ten Commandments. In fact, Mount Sinai itself overlooks the valley where Moses is said to have heard the Lord speaking from a burning bush and according to the believers, it is now enshrined in St Katherine’s Monastery. Since the land is of such religious importance, many pilgrimages are designed around it and the most famous ones being climbing up the Steps of Repentance.

Following the footsteps of Moses in St.Katherine

St.Katherine has the highest mountains in Egypt

To me, however, none of St.Katherine’s spiritual aura mattered. I fell in love with the rugged beauty of the place at first sight and that impression is forever embedded in my heart. Even today, when I close my eyes and transport myself to St.Katherine, I smell clean, mountain air, see a beautiful obstruction-free blue sky span over me, and feel the embrace of massive granite mountains: rock formations as old as time. Once you pay attention, listen to their timeless tales, these mountains have a way of making you feel puny. Against the formidable cliff faces, you feel young, vulnerable, and strangely innocent. Apart from St. Katherine monastery, there are over 200 religious places and other important monasteries and churches, ruins of Byzantine monastic settlements, and Bedouin gardens in that area.

You may also like: WHAT LIES BEYOND THE BLACK DESERT IN EGYPT

The Bedouin gardens of St.Katherine

It holds the highest mountains in Egypt, contains a unique high-altitude desert eco-system with many endemic and rare species and the Bedouin gardens nurture a whole range of medicinal plants used by locals for centuries. Plus, snow-fed pools, springs, creeks, narrow canyons, and wide valleys fill its every corner and the local Jebeliya  Bedouins are one of the friendliest in the entire region. Expert gardeners, natural medicine practitioners, and camel herders, nowadays the Jebeliya Bedouins have resorted to tourism. In comparison to other Bedouin tribes, the Jebeliyas are a very aware community. They are well-informed of the perils of modernism and over-tourism and their elders now share the tribe’s unique customs and practices with outsiders with the hope of keeping them alive.

Suggested for you: THE BAHARIYA OASIS IN THE WESTERN DESERT

The site where it all began

Now, whether you believe in any religion, spirituality, or the heritage of human culture, St. Katherine Protectorate of Egypt is bound to charm you. In the upcoming posts, I will introduce the mountains of Egypt, especially the ones in Southern Sinai. It is one place where you can see the vast expanse of the Red Sea from the tops of the mountains and plateaus. Those are views are timeless and the spawn of humanity has depended on them. Let it slowly sink in as you stand on top of the Moses mountain watching the sunrise that you are standing at the same spot where Moses must have been receiving the epic Ten Commandments from none other than God. He had shared the same view, climbed the same steps, and inhaled the same mountain air. You cannot but help get goosebumps as you realize that you are physically sharing a moment with divinity; with the very seeds of contention that fracture our world still now.

This a biblical land;

And a community bent upon preserving their traditions,

One of the loveliest places in Egypt,

The homeland of the hospitable Jebeliyas, and

And a Biblical site.