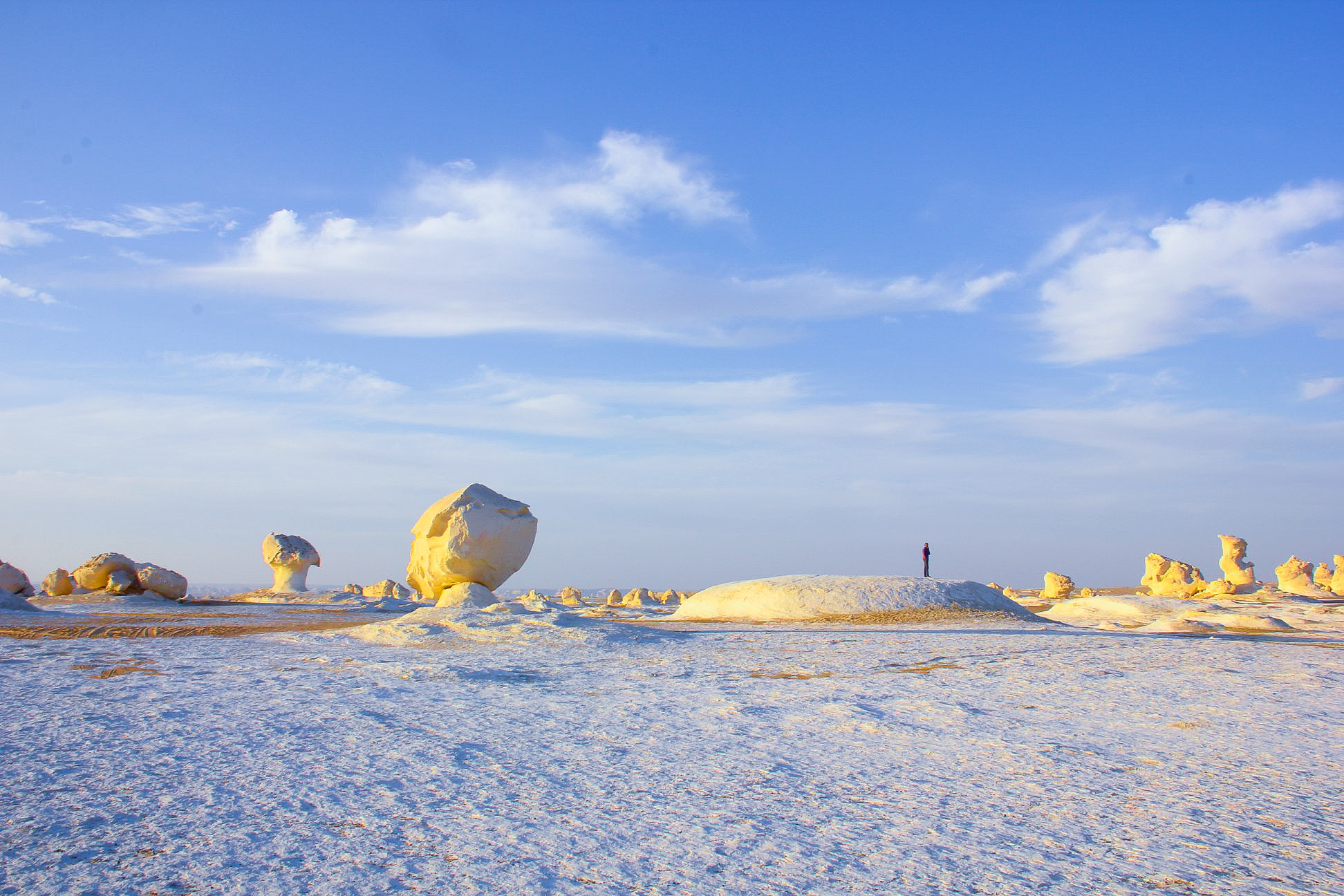 The incredible White Desert in Egypt

I woke up shivering and looked around with bleary eyes. It had been a rough night. Sand had crept into every crevice and even the insides of my ears were filled with fine granules. The scratchy camel wool blanket was warm and heavy, though I struggled to breathe underneath its folds. I looked up and saw a dark silver-blue sky that was sprinkled with fast-fading stars. Hardly any wind stirred and I lay there staring at the vast expanse of sky above me. It was like looking into nothing and my eyes slowly adjusted to the blackness of the night. I cannot recollect how long I had lain like that when the sky started lighting up. Thin slivers of peachy pink streaked across the sky and then magic happened. A stunning sunrise full of vivid violets and pinks exploded above me and the colours spilled over on the land below. The entire undulating expanse of white chalky sand became a mad artist’s canvas and I beheld the most beautiful sunrise in my life. Egypt’s White Desert is spectacular by itself and during sunsets and sunrises, its beauty is absolutely surreal.

Imagine waking up to in an ancient sea

For those who have never heard of this unearthly gorgeous place, the White Desert is a natural protectorate in Egypt and covers an area of 3010 square kilometers. Located in the northern region of the Farafra Oasis in the Western Desert, the White Desert is truly a hidden gem in Egypt, unknown to most tourists. Famous for massive chalk rock formations which range from cream to a dazzling white in colour, the White Desert is one of the most surreal-looking places on earth. For a place of such astonishing alien beauty, its geology is equally interesting. According to geologists and evolutionary scientists, around 60 million years ago, a shallow sea covered this area.
During the following 30 million years, limestone and chalk accumulated at the sea bottom and when the water receded, it left behind thick smooth layers of soft chalky rocks. Wind erosion over eons carved these layers into mind-blowing shapes, the most famous ones being the mushroom, chicken, and the pharaoh.

You may also like: SIWA OASIS OF EGYPT – WHERE REAL ADVENTURE STILL LIVES

The landscape resembles nothing on earth

Even today, it is very easy to find fossilized marine deposits on the limestone layers and in the southern part of the desert, fossils of invertebrates and prehistoric shark teeth have been unearthed. Visiting the White Desert is like going through geology, paleontology, and natural history field trips and then there is the magnificent silence that prevails over the surreal landscape. I visited the White Desert twice. Once, I made the far-flung Farafra Oasis my base, while on the other trip I halted at the larger and more developed Bahariya Oasis. For those unknown to the beauty of Egypt’s Western Desert, there is a crescent-shaped trail of oases scattered across the formidable expanse of sand and these places have been well-spring for life for centuries. Holding many important archeological and sociological secrets, Western Desert oases are nowadays providing much of Egypt’s agricultural produce. Despite the on and off skirmishes between the military and the terrorists, tourism is also picking up and for many Cairo residents, the White Desert is the ultimate long weekend adventure getaway.

Suggested for You: THE STRANGENESS OF SIWA OASIS OF EGYPT

The dazzling terrain of the White Desert

The White Desert is like no other place on earth and I vividly remember seeing it for the first time. It was in summer and we were headed towards the Farafra Oasis, when suddenly patches of snow seemed to appear on the face of the golden desert. Now imagine the shock of seeing possible ice in the middle of the desert in summer and quite understandably, I was speechless. Even though I had been prepped by Tarek on what to expect from the White Desert and had kept my eyes peeled to the window after passing the Black Desert, the actual sight of it made me dumb with disbelief. From afar, the white terrain looked as if a blanket of snow had fallen over the ground and the contrast with the golden yellow sand was magical. I remember that it was a hazy day and a dim sky was punctuated with broken rays of light peeping from behind thick clouds. This filtering light made the White Desert look more alien, almost post-apocalyptic eerie and I watched in awe as slowly strange shapes started jutting out from the white kingdom.

The White Desert has a strange surreal landscape

Enter a land of snowdrops in the middle of the desert

By this time, we had left the main road and gone into the desert where white chalk formations either shot into the sky or lay scattered as frozen waves on the face of the wavy sand dunes. All around us, weather-beaten and wind licked mounds of chalk lay dotted like slices of cake, soft curving buttes, ic-cream cones, and pools of frosting. Some places looked like a huge carpet of ice-dops while larger chalky areas resembled wave tipped glaciers. It is an unbelievable feeling to go past such infinite whiteness in the middle of a desert and the only thing which seems real anymore is the blue sky above. Despite its jaw-dropping beauty, the White Desert covers only 3010 square kilometers and the rest of the barren land is scattered with fossils, sparkling crystals, and outcroppings of deep-black iron pyrites.

The land of snowdrops or broken pieces of glacier

In this upcoming series on the secrets of the Western Desert of Egypt, I will be sharing some of the loveliest offbeat places of Egypt. These are startlingly beautiful places like the White Desert, stunning hikes like the Black Desert and the interesting Bedouin life in the remote oases of Farafra and Bahariya. Stay tuned for some breathtaking photos, offbeat Egypt itinerary, trip guides, and a series of interesting posts. Let’s begin the series with the incredible White Desert, a place like none other on earth.

Sunrise of the softest hue over the White Desert

One of the famous chalk formations

that dot the White Desert

is an unforgettable experience.

The White Desert is

One of the most amazing