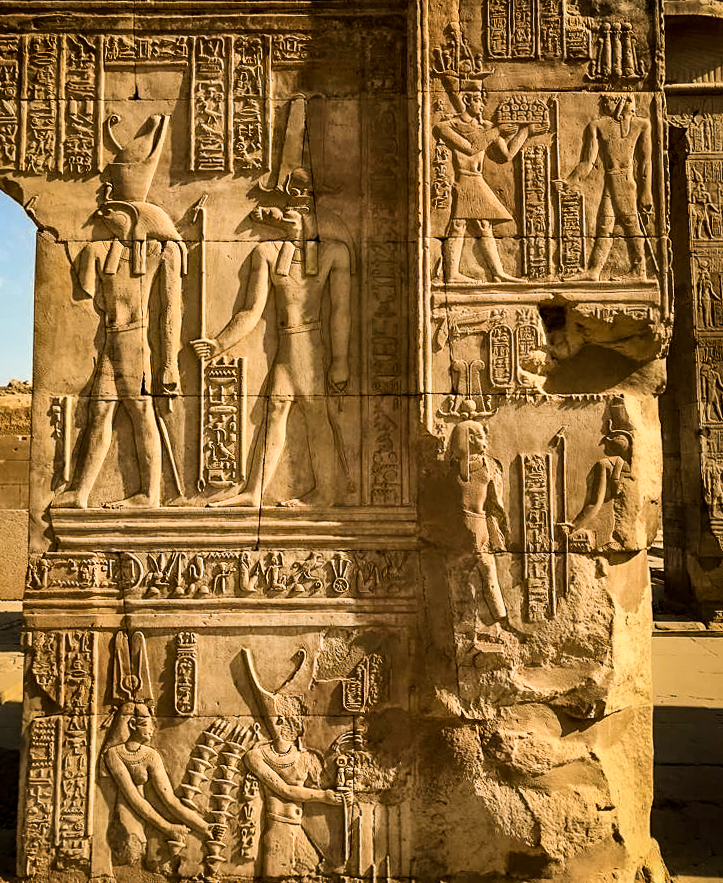 Located on the Nile a 45 kilometers away from Aswan, Kom Ombo is dedicated to Sobek, the Pharaonic crocodile god. The approach to the temple from the river is very dramatic and it is a favourite stop for Nile cruise revelers. Many Egyptologist experts call it the double temple since Kom Ombo has two identical entrances, two linked hypostyle halls, and twin sanctuaries dedicated to two different gods; Sobek and Horus the Elder. I visited this unique temple twice, once during the Nile cruise and the second time on a road trip along the river. While my first visit did not present the temple in the loveliest way, the second trip completed blew my mind away.

The loveliest relief of Kom Ombo is found on the left-hand (northern) wall. Here, the falcon-headed Horus is presenting the Ptolemaic era pharaoh with the curved sword of victory and the hieroglyph for eternal life.

To understand the importance of Kom Ombo, it helps to know a bit about the timeline of the ancient Egyptian civilization. Few written records or artifacts have been found from the Predynastic Period that lasted nearly for 2000 years from 5000-3100 B.C. The ancient Egyptian civilization as we understand began when King Menes established the capital city of Memphis at the apex of the Nile Delta. This period flourished from 3100-2686 B.C and the earliest known hieroglyphic writings also date to this time. The age of the Pyramid Builders also known as the Old Kingdom lasted from 2686 B.C.  to 2181 B.C and the civilization spread into Nubia beyond Aswan. The Middle Kingdom began with the 12th Dynasty (c. 2055-1786 B.C.) and Egypt pursued an aggressive foreign policy, colonizing Nubia (with its rich supply of gold, ebony, ivory and other resources). Egypt at that time was divided into Upper and Lower Egypt kingdoms and throughout history only a handful of pharaohs managed to unite them. Those pharaohs wore the signature double crown that symbolized this important unification and their representations tower over most of the contemporaries in hieroglyphic and tomb frescoes. It was however during the New Kingdom (c. 1567-1085 B.C.) during which Egypt established the world’s first great empire, stretching from Nubia to the Euphrates River in Asia. After the New Kingdom, ancient Egypt nearly fell apart and it was conquered by the Persians, Alexander the Great and other Macedonian kings, and finally the Romans before the Ottomans took over.

The Kom Ombo roof is decorated with flying vultures.

The double dedication of Kom Ombo

The present day Kom Ombo temple sits atop the site of an older temple during the rule of the 18th-dynasty pharaoh Thutmose III. Only a sandstone doorway remains of of the pre-dated temple and the modern day Kom Ombo was commissioned by King Ptolemy VI Philometor, who lived from 186-145 BC. It is believed that elaborate reliefs on the temple walls were ordered by his successors. As mentioned before, Kom Ombo is dedicated to two Pharaonic deities and the western half of it glorifies Sobek, the crocodile god of fertility. In ancient Egypt, Sobek was worshiped for fertility and protection against the real crocodiles that infested the Nile river. The eastern half of the temple is dedicated to Horus the Elder, one of the oldest gods in the Egyptian pantheon. A creator god similar to our very own Brahma, Horus can be recognized by his falcon’s head. The temple is home to a quirky Crocodile Museum that has some 300-odd crocodile mummies discovered on site and it were the reptile mummies which spooked me during my first sunset Kom Ombo visit.

Wall Relief at Temple of Horus and Sobek in Kom Ombo, Egypt

On my last visit, Kom Ombo revealed its secrets and the temple frescoes gave better insight into cult liturgies of that time period. We reached there by road and explored the temple starting in the forecourt. The remains of a double altar and a three sided colonnade can be seen and each column is exquisitely engraved with floral designs. The inner and outer hypostyle halls have ten beautifully relief carved columns each. Hypostyle literally means an inner space whose roof is held by pillars and the ones in Kom Ombo are magnificently covered with reliefs. Detailed engravings can be found everywhere: on the ceiling, the pillars, and the walls. Some even retain traces of the original colours like turquoise, black, maroon, and white. Kom Ombo temple reliefs depict several deities, kings, queens, war scenes, and Roman emperors like Trajan and Tiberius. The ones to look out for are the presentation of Ptolemy XII Neos Dionysos to Horus the Elder, the coronation of Ptolemy XII with the dual crown of Upper and Lower Egypt, signifying the nation’s unification, and a set of surgical instruments on the back wall of the temple’s outer passage. It is believed the space was used as a pharmacy or a clinic and on the grounds there is a shrine dedicated to Hathor. One particularly striking relief shows that there was a birthing house on the premises of the temple as well as the pool where the sacred temple crocodiles were kept.

My second visit to Kom Ombo was an eye opening one. Although the temple has been much damaged over the centuries, its skeletal remains were magnificent and revealing. It sits quietly on the east bank of the River Nile on an outcrop upon which once crocodiles basked surrounded a sleepy agricultural community and sugar cane fields. Fellaheens (local villagers) trundle by the ruins on crusty donkeys and the scene seems Biblical but for the hulking ruins of the Kom Ombo temple. Irrespective of whether you are in interested in archaeology or simply enjoying a Nile cruise, Kom Ombo is a must visit temple in Upper Egypt.

Parts of the Kom Ombo Temple and what not to miss