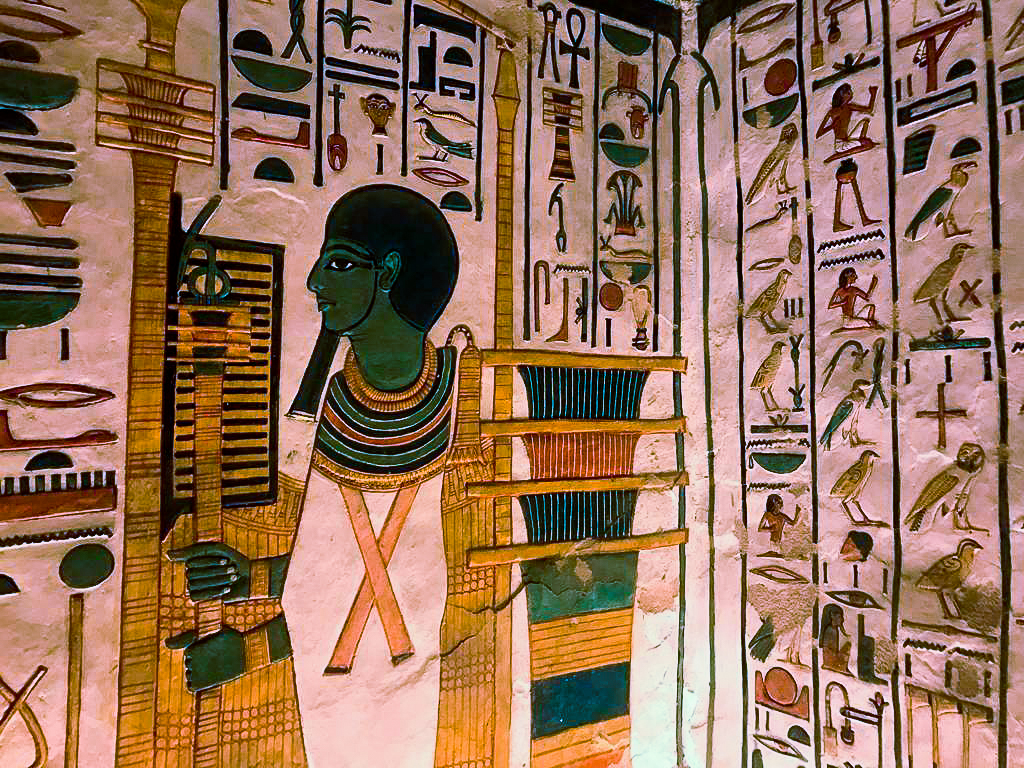 Tomb of Nefertari, an ode to an extraordinary queen

Nefertari is hailed as one of the most beautiful, prominent, and beloved queens of ancient Egypt. She was one of the most principal wives of the great pharaoh, Ramses II, and the only one for whom he built various monuments. He even immortalized her next to him while building the Abu Simbel and she is the only queen who has been featured like this by him. Ramses II even wrote a love poem for her, adorned her with various titles, and buried her in the most beautiful tombs in Egypt. The Tomb of Nefertari is the finest in the world, at least of that time frame, and it is an exquisite labour of love for a beloved wife. Every inch of the tomb is vividly painted and this includes the three chambers and the connecting corridor.

Nefertari, the queen for whom Ramses II wrote love poems

One of the most famous ancient Egyptian queens along with Hatshepsut, Cleopatra, and Nefertiti, she ruled Egypt alongside Ramses II around 1290 B.C. A highly educated woman of her time, Nefertari could read and write hieroglyphs and was responsible for maintaining diplomatic ties with foreign allies of the pharaoh. She was given many titles like the Great of Praises, Lady of Grace, Great King’s Wife, Lady of all Lands, and Ramesses II personally named her ‘The one for whom the sun shines’. Nefertari appears as Ramesses II’s consort on many statues in Luxor and Karnak temples and she is depicted in statue form not only at the great temple of Abu Simbel, but the small on-site temple is dedicated to her and the goddess Hathor was commissioned by her husband. Upon her death, which happened around 1250 B.C, Ramses II buried her in the most magnificent tomb and this was his final tribute to his beloved queen. Incidentally, he even wrote love poems for her and the most famous one is inscribed on the wall of the Tomb of Nefertari. “My love is unique – no one can rival her, for she is the most beautiful woman alive. Just by passing, she has stolen away my heart.”

Floor plan of the tomb of Nefertari

It is believed that the marriage between Ramses II and Nefertari was a political alliance which blossomed into deep love. They had many children and it was her eldest son, who became the heir of Ramses II. Apart from handling the diplomatic affairs, Nefertari also accompanied her husband to military campaigns and theirs was one of the most stable marriages and love stories of that time. Rameses II said of Nefertari “My beloved, I believe that behind every successful man is a great woman like you, Nefertari” and after her death, she was given fitful honours. The Tomb of Nefertari lies in the modern-day, Valley of the Queens and it is more famously known as QV66. It has approximately 484 square meters (5,200 feet) of wall space and was discovered by Ernesto Schiaparelli in 1904. Containing three chambers and a connecting corridor, the tomb of Nefertari was also one of the most badly looted ones. No trace of the original entrance remains preserved and besides the stunning wall paintings, only bits of a damaged pink granite sarcophagus, broken furniture, jars, a pair of sandals, and two fragmented mummified legs (parts of tibiae and femora) were found inside. These remains are now housed in the Egyptian Museum in Turin. The highlight of the tomb of Nefertari is its fantastic frescoes and these were done by paint bonded to wet plaster and laid over the rough limestone walls. The beautiful depictions of Nefertari are over three thousand years old, yet she still manages to captivate with her beauty; the shape of her eyes, the blush of her cheeks, her eyebrow, and her diaphanous white gown.

Nefertari against the Egyptian god, Thoth

Details of the most beautiful tomb in Egypt

According to the map above, the tomb of Nefertari has two sets of stairs (one at the entrance and one as a connector), seven rooms, and several pillars. The first flight of steps from the entrance is decorated with paintings from Chapter 17 of the Book of the Dead. This ancient Egyptian funerary text consists of a number of magic spells that assist a dead person’s journey through the underworld and into the afterlife. The ceiling is a field of cobalt blue with myriad five-pointed golden stars and on the walls of the ante-chambers, various gods and goddesses are shown welcoming Nefertari into the afterlife. The second flight of steps leads to the inner hall which once held the sarcophagus and the mummy of the dead queen before these were stolen by the tomb raiders. This is the most beautiful part of the tomb with wonderful paintings covering every inch of the walls, ceilings, and the pillars. There are many depictions of the numerous chapters from the Book of the Dead that guide Nefertari on how to become a bird, thus gifting her with the freedom of movement.

Many gods are painted on the walls of the tomb of Nefertari and the most famous one is Osiris. To enter any tomb is to step into the realm of Osiris. He was the ancient Egyptian god of the underworld, of the dead, and the lord of all living human beings. Ancient Egyptians believed death to be a natural phase of the soul’s journey and Osiris’s images are always present on the tomb’s walls. He is usually painted with his identifying symbols, the crook, flagellum and leopardskin-bag. He often wears white that sets off the deep jewel colours of his necklace and headdress. In the tomb of Nefertari, Osiris can be seen in the first chamber in the descent and to the right are images of a splendid throne and Atum, “Lord of the Two Lands” of Upper and Lower Egypt. In another image, Osiris is shown wearing a different head-dress and holding a staff of papyrus plant. Many interesting details can be found at the tomb of Nefertari, the most important being the variety of skin colours. Egypt is geographically at the crossroads of Africa, Asia, the Mediterranean, and Europe and this can be vividly seen in the various skin colours depicted on the murals throughout the tomb. The two most painted goddesses inside the tomb of Nefertari are Neith and Hathor. In the frescoes, Neith is depicted as a beautiful companion and guide of Nefertari in the afterlife, who helps the dead queen adjust to her new settings. The female counterpart of Osiris, Hathor is also shown guiding Nefertari by touching her on her shoulder. Another important goddess, Isis is also shown presenting the queen with “ankh” just as she was about to step into the realm of the dead. The queen and Isis hold hands and Isis places the “ankh” at Nefertari’s mouth and nostrils. The “ankh” is the symbol of breath, life, and spirit and it does not seem to mark the last breath leaving the body, rather the gift of immortality. Nefertari instead of expiring or exhaling her last breath inhales ‘ankh” a.k.a immortality.  but inhales. Nefertari herself has been shown bearing gifts for the gods of the afterlife.

Nefertari being presented “ankh” by Isis

Preservation efforts to save this 3000 years old tomb

Ever since its discovery in 1904, the tomb of Nefertari has been opened and closed to the public many times. Scientists found the paintings to be under threat from water damage, bacterial growth, salt formation, and recently, the humidity of visitors’ breath. Thus, from 1988 to 1992, the tomb of Nefertari remained closed for intensive restoration work. In 2020, it was opened again with a maximum of 150 visitors per day. Time spent inside the tomb is also limited to 10 minutes per person and the steep ticket price is made to discourage a rush of tourists. At present, the entrance ticket price of the tomb of Nefertari is 1000 EGP (nearly 60 USD per person). Only cellphone photography is allowed and using flash is strictly not permitted. Photography with cameras is not allowed.

The tomb of Nefertari Travel Tips

Ticket Price – 100 EGP for the Valley of the Queens and 1400 EGP additional fee for the tomb of Nefertari. Total 1500 EGP and this includes the tomb of Nefertari along with three other tombs. The other remarkable tombs are those of queen Titi, Khaemwaset, and Amunherkhepshef. Tickets can be purchased at the ticket office in the Valley of the Queens.

Timings – The Valley of the Queens is open from 6 am – 5 pm. There is a 10-minute time limit for staying inside the tomb of Nefertari. The entrance to the tomb is restricted to only 150 visitors per day.

Travel Tip – Purchase the Premium Luxor Pass which allows access to all sites and museums on the east and west banks of the Nile, including the tombs of Seti I and Nefertari (which are not part of the regular Luxor Pass). If the tombs of Queen Nefertari and Seti I (which costs 1000 EGP) are in your wishlist, you will end up saving 400 EGP.  you visit the tomb of Queen Nefertari and the tomb of Seti I in the Valley of the Kings (which costs 1000 EGP), you will already save 400 EGP. The Premium Luxor pass costs $200 USD and can be purchased at the Public Relations Office in the Luxor Inspectorate, which is behind the Luxor Museum. You’ll need a copy of your passport and a passport-sized photo. Passes do not need to be bought in advance. Check out this detailed informative post for more Luxor Pass details.

Frescoes inside the tomb of Nefertari – The green god here is Khnum, considered to make the bodies of children from clay and place them in a mother’s uterus.

Frescoes inside the tomb of Nefertari – note the starry ceiling

A fresco from another tomb at the Valley of the Queens. The side partition hair shows that the deceased was of a young age; a young/child prince