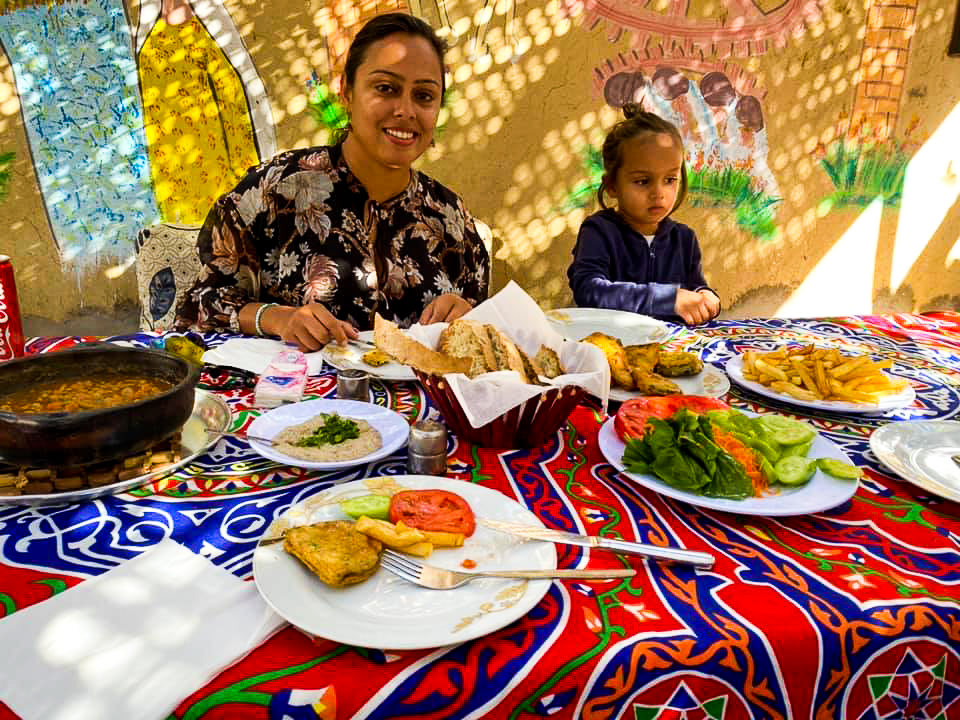 Luxor food fiesta: what we ate there

During our last trip, we ate a lot of local Luxor food. Both Akash and I are big foodies and we truly enjoy food. So we indulged in our favourite Egyptian dishes and our trip was literally a Luxor food fiesta. From the homely molokhia to stuffed pigeons, here are some of my favourite dishes in Luxor.

Locally known as Hamam Mahshi, these stuffed squabs have been served for centuries.  Squab is a small pigeon that is considered a delicacy in many cultures including the Egyptians. Mudbrick towers that house these birds are common sights all along the Nile. In Egypt, pigeons are stuffed with a unique super-grain called freekeh. It is cracked green wheat that has a unique flavor almost nutty. Personally, I found the taste of the Egyptian stuffed pigeon to be a bit gamey, but the skin was crisp and Akash loved it.

Molokhia, also Mulukhia is a green soup made from minced Jews/Jute mallow leaves and cooked in broth. Traditionally, this soup is cooked with garlic, coriander, chicken meat, or chicken stock, and is usually served with white rice. Rabbit is also popularly used in Molokhia. It is believed that the dish dates back to the time of the Pharaohs. At that time, Molokhia was only consumed by the royals and the nobles. Molokhia has a slimy delicious taste and it is very popular throughout the Arab world. It was a family favourite when we were living in Cairo and in Luxor, we ate it with gusto. Incidentally, since it is such a home comfort food, molokhia is not easily available in fancy restaurants. Akash and I had to seek out small local eateries to enjoy bowls of this green goodness.

This is plain good carrots, beans, and peas stew. In Egypt, usually meat is added to Elbasila. However, we like the vegetarian version better and ate it with nearly every meal. At Mohamed’s restaurant on the West Bank, we ate Elbasila that was served in a cute cast iron skillet that bubbled deliciously over a tabletop stove.

You can almost smell that Elbasila

Tea with mint leaves is also called Shai Bil Nana. In Egypt, tea is always served in transparent glasses – a tradition that continues unchanged. These are decorated with traditional designs, but care is always taken to ensure the design does not hide the tea. Sugar and mint leaves are served separately.

Roz bil Shareya or the Vermicelli Rice accompanies nearly every meal in Egypt. It is a simple and delicious accompaniment. In Egypt short or medium grain rice is used and the vermicelli is cooked with the rice. It is toasted golden brown before the rice is added and then both are cooked together.

Although I can’t remember the names of the rest of what we ate, our every Egyptian meal was accompanied by bread. Known as Aish Baladi, this bread is a glutinous form of pita bread that’s the lifeblood of the country’s rural, working-class communities. Such is the importance and centrality of this bread in the Egyptian common man’s life that Aish Baladi is subsidised by the government. Its name alone is derived from the ancient Egyptian Arabic for ‘to live and be alive’.

Aish Baladi, the lifeline of the Egyptian common man

The heritage of Egyptian food

Eating in Egypt is a grand feeling. If you think about it deeply, you realize you are indulging in cuisine that was founded over 4,000 years ago. The legacy of ancient civilization has a profound influence on Egypt’s culinary tastes. Though it shares similarities with other Eastern Mediterranean cuisines, over the years Egypt has cultivated its own distinct diet that is heavily reliant on the produce grown on the fertile banks of the iconic River Nile. Egyptian people are proud of their culinary heritage and their colourful dishes are focused on legumes and vegetables. The generous use of seasonings like fresh herbs and spices, chiefly cumin, cardamom, coriander, aniseed, cinnamon, mint, and clove point to Egypt’s ancient trade connections with India and the Far East. Thus as I said, eating in Egypt is a lot of fun. Here are some pictures of how we turned our last visit into a Luxor food trip.

Mahshi Hamam – look at the stuffing and the tended meat