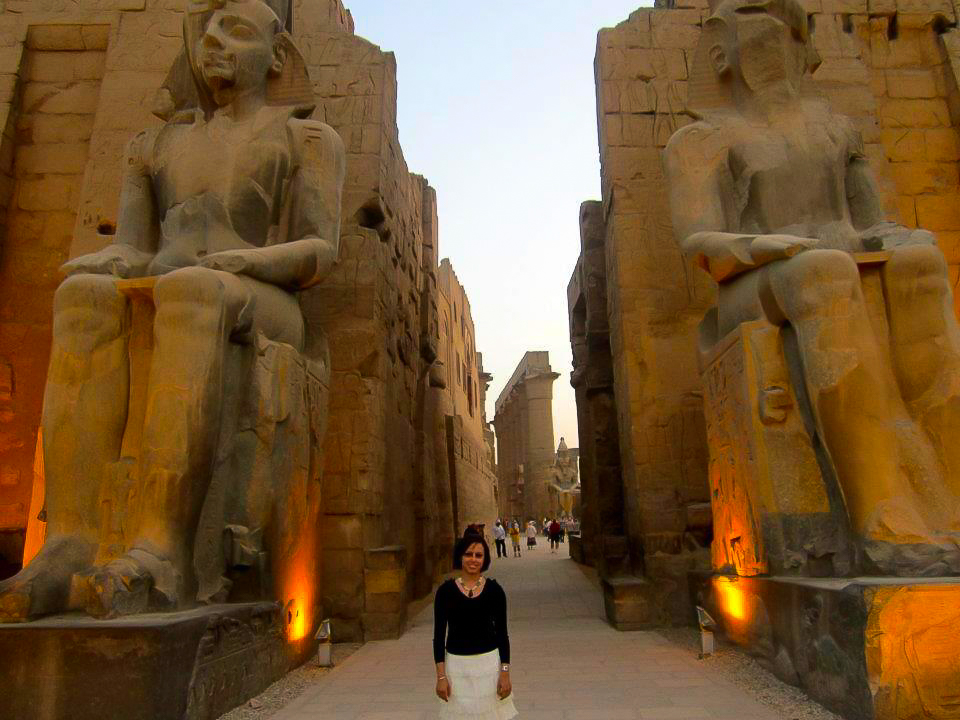 Karnak and Luxor, the best of the Luxor temples

I first visited Luxor temples sometime during 2010. It was during my first visit to Egypt. On my second visit, I chose to skip them owing to the crowds and the expensive foreigner tickets and focused on the tombs instead. However, I still vividly remember my awestruck impressions of Luxor temples and that coming from me, a national of a country filled with gorgeous monuments, says a lot. I remember how larger than life the Karnak temple was and how impressed I was at the sight of the avenue of sphinxes that had been recently excavated. Karnak was like a history book and its humongous interiors encompassed several dynasties and eras. Dedicated to the Theban (the ancient capital city of Thebes i.e modern-day Luxor) principle deity Amun, the complex was an open-air museum of impressive temples, chapels, and pylons. The oldest of the structures dated back to more than 3,000 years and it was the second-largest ancient site in the world, after Angkor Wat in Cambodia. The Karnak temple was also definitely one of Egypt’s most visited spots and together with the exquisite Luxor Temple with which it was connected, they made the ancient city of Thebes a.k.a Luxor, a tourist mecca.

The avenue of the sphinxes

Karnak, the best of the Luxor temples

It was blinding hot when I stepped inside Karnak’s extensive depths and found it to be the more impressive of the two mega Luxor temples. Surprisingly, only one precinct out of four was open for the public and that was the Precinct of Amun-Ra. The other three included the Precinct of Mut, Precinct of Montu, and the dismantled Temple of Amenhotep IV. A handful of other small structures were interspersed between the precincts and approximately thirty pharaohs had contributed to the construction of the complex. This resulted in Karnak’s incredible size and diversity of style and it was later found out that the later pharaohs broke down older buildings completely or partially in order to give them makeovers according to their choice. The oldest Precinct of Mut clearly showed shown traces of changing history and the powerful Queen Hatshepsut supposedly was one of the reasons behind its multiple reconstructions. What set Karnak temple apart from the rest of the Luxor temples was its chronological evolution of architectural style, patron deities, and whims of pharaohs.

Details of the ancient Egyptian societies

As mentioned before, the complex was like a literal history book and each structure gave away eye-opening glimpses of the then existing Egyptian societies. Piety, love, hatred, jealousy, sex, and other regular human acts and feelings echoed through the huge golden depths and walking from one precinct to another meant either changing historical periods or different celebrations of daily life. While the closed precinct of Mut held titillating glimpses of festivals of excess, the temple of Amenhotep IV or the monotheist Akhenaten bore signs of the wrath of the general public. The celebrated Queen Hatshepsut was the main patron of the precinct of Mut and its infamous “porch of drunkenness” was created to depict the annual drunken festival of Sekhmet. Quite similar to ancient Indian celebrations of Holi, Sekhmet involved people getting drunk, participating in orgies, and other such activities.

At Karnak Temple, you might find yourself surrounded by baksheesh asking hustlers.

Luxor temples and the power struggle of the pharaohs

Although closed to the public, Hatshepsut’s architectural pride gloriously towered over most of the complex and it immediately pointed towards her immense power. Interestingly, Karnak’s power play did not end there and the much destroyed Akhenaten’s temple revealed public tides turning against a pharaoh. Rebellious Akhenaten had broken away from the existing tradition by denouncing Amun Ra and establishing his own capital city, along with a different principal deity. This resulted, in him being extremely unpopular and after his death, the powerful priests did their best to remove or disfigure his statues in every way. Karnak, thus, bore all the ravages of time and the complex’s historical timelines heaved inside my head as I skipped across the blazing cobblestones towards the Precinct of Amun Ra.

The giant papyrus columns at Karnak

The Precinct of Amun was nothing like I had ever experienced before. The precinct’s sheer scale made me speechless and a fantastic hypostyle hall of a forest of giant papyrus shaped columns was its highlight. I  wandered along with the golden columns in relief since even the bright noon sun barely managed to filter through its thickness and it was the perfect spot to cool down. I spent the rest of the afternoon there until the sun became mellow and at the approaching sunset made my way towards the other highlight of Luxor temples. While not as massive as Karnak, Luxor temple was more graceful and it looked superb during sunset. The lovely complex stood in the middle of the modern city and it was constructed for hosting coronation ceremonies. The larger than life statues of the ancient Egyptian rulers marked their importance and the Luxor temple complex was thus decorated with numerous temples, chapels, obelisks, and fortifications.

It was also one of Egypt’s best sunset spots and the Luxor temple was crowded with people by the time I reached there. Its entrance was simply mind-blowing and a huge pair of seated statues of Ramses II welcomed the visitors in an imperious way. Scenes of the welcoming pharaoh’s military exploits were etched on the walls of the first pylon and later Nubian kings too added their glory to them. Beyond, double rows of lotus bud topped columns lead within the complex, from where it turned into one series of obelisks, shrines, and more hypostyle halls. The trend of larger than life statues of pharaohs continued inside the complex and Amenhotep III, Tutankhamen, and other such famous names jostled for attention. It was too much for one day and the series of towering royal figures spun me through ancient Egyptian history like a busy top. I gave up trying to keep track of the expansive Egyptian history shortly when the loveliest sunset filtered through the stunning Colonnade of Amenhotep III. A Luxor day was ending fast, giving way to a romantic evening, and as if on cue, the Nile unfurled its most gentle breeze. The soft caressing wind which brought much relief after the heat of the day billowed the glowing white of the local’s gallebeyas like sails and the beauty of it all took our collective breaths away. It was a sunset befitting a day spent at the Luxor temples and once again proved why the ancient city of Thebes, is not overrated.

Both the Luxor temples can be visited in one day. It makes more sense to start with Luxor Temple. Start early to avoid the crowd and the heat. Luxor temple is close to most of the hotels on the east bank and it is also close to the ferry port for those coming from the west bank. Luxor and Karnak temples are only thirty minutes apart on foot. You can take a taxi if you wish to beat the heat, but make sure to bargain hard and watch out for scams and hustlers. At the time of my first Luxor visit, construction was going on to excavate the entire massive sphinx lined walkway that once connected the two temples.

The recommended route for Karnak Temple

The far western end of the complex is where everyone begins their Karnak tour. The first pylon resembles a double gate-like structure. After the first pylon, comes the Great Court, which contains a few minor temples. The Hypostyle Hall is Karnak’s main highlight. Central Sanctuary comes next and further east lies the spacious courtyard with the unique Festival Temple of Thutmosis III. With this ends the main part of the Karnak Temple. The Temple of Ptah lies in the northern part of the complex and close by is the fascinating Open-Air Museum. There is a fallen obelisk next to the Sacred Lake. The Temple of Khonsu is in the southern part which holds the pylons numbered from 7 to 10. Though the Precinct of Mut is inside the complex, it is possible to visit it if the gates near the Temple of Khonsu or the 10th pylon are open. Otherwise, one has to exit Karnak and walk about 20 minutes through town to get there.

Luxor is a stunning magnificent experience.

The not to miss spots of Karnak Temple

If you are staying on the east bank, then simply walk to the Luxor temple. It costs 140EGP to enter the Luxor Temple grounds. A guide is not required for this complex.

The not to miss spots of Luxor Temple

Ticket Prices and Timings – 160 EGP/adult and 80 EGP for students who have a valid student id. Photography is free. Luxor Temple is open from 6 am – 9 pm. The best time to visit Luxor Temple is around 10 am. It is the best place to see a sunset.

Other Places of Interest on the East Bank

Luxor Pass has two options. The first option includes all sites and museums open to the public on both the East and West Banks of Luxor, except the tombs of Seti I and Nefertari. These two tombs are included in the second and the more expensive Luxor Pass that includes both tombs as well as all the sites and museums included on the first ticket. The Luxor Pass allows visitors multiple entries to all the mentioned sites and museums and is valid for five days. The first option of the pass that excludes the tombs is US$ 100 and US$ 50 for students. The second Luxor Pass option that includes the tombs of Seti I and Nefertari cost US$200, or US$100 if you are a student. Tickets for the tombs of Seti and Nefertari cost of 1000 Egyptian pounds each and can be purchased individually. Only 150 people are allowed into each tomb daily. Only US Dollars and Euros can be used for purchasing the Luxor Pass. It is not possible to pay with Egyptian Pounds, any other foreign currencies, or credit/debit cards. A passport photograph and a photocopy of your passport details page are needed for purchasing the Luxor Pass.  A “Luxor Pass” can be bought from an office near Luxor Museum or from Luxor Public Library. Tickets for Nefertari’s tomb can be purchased at the ticket office for the Valley of the Queens, and at the ticket office for the Valley of the Kings for Seti I. Check out this detailed informative post for more Luxor Pass details.

Just take Luxor with patience, humour and a pinch of salt.