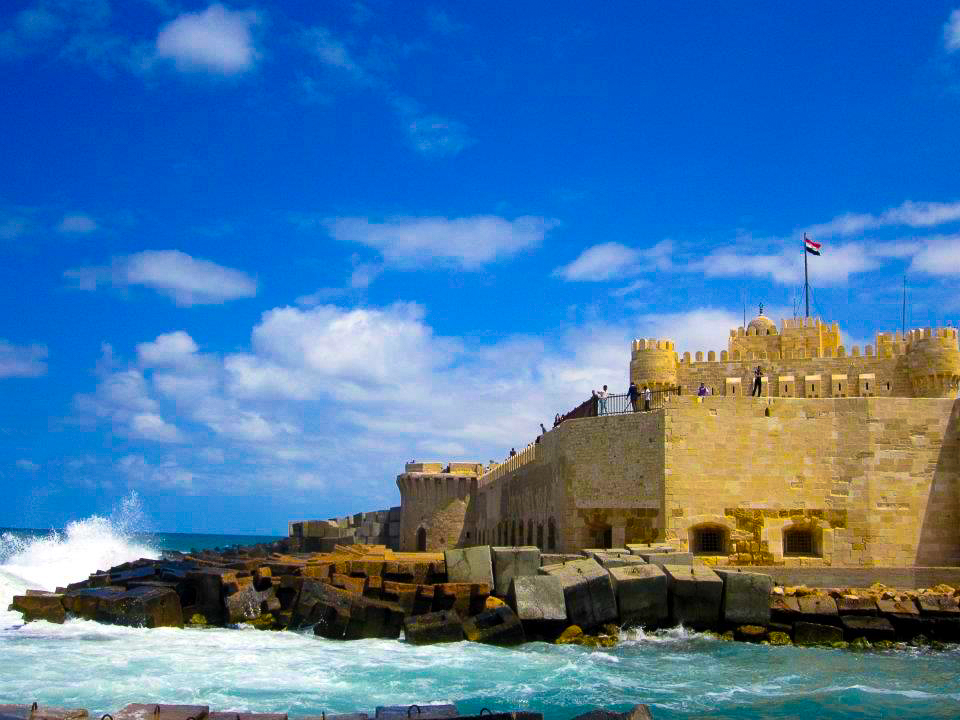 Alexandria is one of my favourite places in Egypt and I visited it twice. Founded by none other than Alexander, the Great, the ancient city was the home of Queen Cleopatra VII and its importance was unrivaled during ancient times. The famous Pharos Lighthouse/Lighthouse of Alexandria (one of the 7 wonders of the ancient world) used to beam directions to countless seafaring ships from Alexandria’s rocky shore and its great library, the seat of ancient knowledge was the crown jewel of this Mediterranean city. Unfortunately, nothing of Alexander’s pride remains and traces of Pharos lighthouse remain anymore. Cleopatra’s palace remains inundated under the Mediterranean Sea and a swanky new library stands on the site of its famous ancient predecessor. Once, reckoned as “the pearl of the Mediterranean”, present-day Alexandria seems faded in contrast to its erstwhile glory and now only crumbling old buildings, sweeping cornice and leisurely chaos mark Egypt’s second-largest city. So why do I love Alexandria? What makes me remember it so vividly and what sets it apart from the rest of beautiful Egypt? These questions have puzzled my mind often and I found my attraction towards the port city to be very instinctive. Alexandria has been a tireless fighter throughout her entire existence and despite being a victim to war, earthquakes, royal ravages, tsunamis, etc, her never say die swagger is addictive. That was my biggest attraction towards this lovely coastal town and I love her proud, eclectic energy.

The local life of Alexandria

Located around three hours away from Cairo, I first visited Alexandria on a day trip from the Egyptian capital city. A short smooth drive down the well maintained Desert Road took me to Alexandria quickly and my first sight of the city made it seem very provincial in a uniquely charming way. The streets were already been bustling, despite the early hour and school children, workmen and housewives moved around with chattering energy. Shrill complaints of sleepy children, garrulous tones of bargaining women and clanging of pots, pans, vehicle horns, bells, footsteps, and words rose in crescendo and Alexandria as a city, moved fast. Sheesha gurgled furiously, its smoke curling out of silent, immobile old faces and these created Alexandria’s minuscule spots of silence. Fishermen and fishmongers hawked their baskets of fresh catch and vegetable piles glistened wet with the fresh onslaught of sprinkled water. Alexandria had the reputation of getting hot fast and produce sellers busied themselves in keeping their wares looking fresh, while occasionally swatting off flies and mangy cats.

The Corniche in Alexandria

A glitterati of the ancient world

There were too many cats in Alexandria and it was one of those quirks, that I remember vividly about the city. Another unexpected surprise was the deep influence of Alexandria’s European legacy on its modern-day world. A modern city and an urban governorate, Alexandria’s (or  Al-Iskandariyyah as it is known in Arabic) Hellenistic history started in 331 BC when Alexander, the Great laid its foundation around a small Egyptian town called Rhakotis. Created to be the link between the rich Nile Valley and Greece, Alexandria soon grew into an intellectual, educational, and cultural hub of the ancient world and its world-class libraries, museums and glittering cityscape attracted many of the greatest scholars of that time. Attracted by Alexandria’s brilliant scholarly reputation, they came flocking from diverse backgrounds, and many think tank Jews, Syrians, and Greeks left their marks upon the ancient city. Alexandria thus flourished rapidly and even after its founder’s departure, found patronage from his viceroy and other chief officers in charge. While one oversaw its development, others helped make it grow in importance in the world of commerce.

The rise of Alexandria

Under their patronage, Alexandria quickly morphed into the new center of trade between Europe, Arabia, and the Indian East and was soon crowned as the ancient world’s largest city. “The pearl of the Mediterranean” retained this title for many centuries and although wars destroyed much of Alexandria’s beauty during 115 AD, the urban rubble heap gave the Romans a chance to rebuild it. This they did with passion. Upon conquering Alexandria, the Romans recreated it into a city that rivaled Rome in beauty, glory, and importance for centuries. Even today, their architectural creations remain its most visited (and intact) archaeological treasures. Alexandria’s evolution continued throughout the post-Roman era, and sometime around the 7th century, the advent of Islam left its impact as well. After that, it fell into the hands of the Persians and Turks consecutively and the French conqueror, Napoleon too left traces on Alexandria. The British forces fought for the coastal city fiercely before occupying it for a long period and following the 1956 Suez Crisis, an outburst of Arab nationalism finally returned Alexandria to Egypt, its rightful owner.

History came to a full circle when nearly all the Europeans left Alexandria in 1961 and in my eyes, it once again returned to being Rhakotis, the ancient Egyptian village, from where the fantastic roller coaster journey started. For a city, stretching for 32 kilometers along the Mediterranean Sea, it had too much of intense history and political action. The culturally rich, student town is a hotbed of controversies, bohemian ideals, and power. I loved everything about Alexandria: its lazy, dusty congested quarters, jangling tramcars, its circlet of the Mediterranean Sea, and its outspoken street art painted on the crumbling city walls. The whole city was like a strange open-air museum. Although it was a far cry from Luxor’s preserved archaeological wonder, Alexandria’s ancient glory can be found scattered all over the city in forms of burial chambers, castles, amphitheater, and obelisks.

The Kom el Shoqafa or the underground necropolis

While most of Alexandria’s historical treasures had been carted off to museums across the world, some of its most famous heritage sites were open for exploration. My Alexandria trip began with one such site and it was the infamous Kom el Shoqafa. Located underneath the dusty, congested Karmouz district, Kom el Shoqafa meant “Mound of Shards” and the catacomb necropolis was one of the seven wonders of the ancient world. Many Alexandrian tombs, statues, and artifacts of Pharaonic, Hellenistic, and early Roman cults have been found there and it was a burial place for both humans and animals. Discovered by accident, Kom el Shoqafa’s most famous feature was the Hall of Caracalla, which contained the bones of all the young Christian men and their horses, who were massacred by the Roman emperor during 215 AD. Being slightly claustrophobic by nature, I found the catacombs of Kom el Shoqafa to be suffocating although the exquisite relief covered burial vaults were very impressive.

The blue of the Mediterranean Sea

Now, when I say, that I remember everything about Alexandria, I do not mean a crystal clear recollection of the day’s itinerary. Instead, what comes to my mind vividly is the city’s timeless ambiance, the lovely honey warm sunshine, and the salty breeze which rushed over from the rolling blue Mediterranean Sea. It is, in fact, the lively aquamarine sea that remains most alive on my mind. While Hurghada’s Red Sea was a refreshing break from the Egyptian desert’s stoic aridity,  Alexandria’s the Mediterranean Sea seemed to have a life of its own. It held secrets, royal chambers, untold marine life under its heaving bosom and recent excavation work of Queen Cleopatra’s palace revealed beautiful treasures. I loved its glassy blue surface upon which colourful fishing trawlers floated and its artificial seawall had abounded with life.

The Citadel of Qaitbay

The Citadel of Qaitbay

Cats of all shapes and sizes hung around there looking for fishy tidbits and the sea wall was popular among both the tourists and locals. Traffic zipped past noisily and the cornice held many of Alexandria’s famous fish restaurants. For a city and civilization, so heavily dependent on the sea, Alexandria’s fish heavy cuisine did not come as a surprise and I enjoyed one of the best meals in Egypt there. The gorgeous Citadel of Qaitbay was also located there and till today, recollections of its sight take my breath away. A fortress turned prison turned maritime museum, the Citadel of Qaitbay enjoyed an awe-inspiring location and the lovely Mediterranean Sea splashed at its feet. Built by Mamluk Sultan Abdul Nasser Qaitbay, it was razed and reconstructed like the rest of Alexandria, and the famous Pharos Lighthouse once stood at the exact spot. With all the surrounding historical drama, jaw-dropping natural beauty, and intense history, it was not difficult for the Citadel of Qaitbay to be memorable. If ever a day can be described as infectiously happy, then my Alexandria visit happened on one such occasion. That visit left lasting impressions, so much so, that I returned to Alexandria after ten years for another memorable trip.

The belle epoque architecture of Alexandria

Alexandria is a city with a character. The Mediterranean Sea shaped its economy and it is famous as one of the most important cities in the ancient world. Founded by Alexander, the Great, Alexandria is an interesting destination in Egypt and can be done as a day trip from Cairo (although at least an overnight stay is recommended).

Getting around within Alexandria

Alexandria has a wide network of public transportation options. These include the tram network, the commuter rail, and public buses. It might be difficult to understand the schedules at bus and tram stops since many are written in Arabic. You can always ask the locals for help. Avoid the microbuses in Alexandria (and entire Egypt) and make sure to bargain the fare with the taxi drivers before embarking. You can also take a horse and carriage around the city for short journeys and tuk tuks. Make sure to bargain the fare. While most of the attractions in Alexandria are located near the Corniche, some like the Montazah palace are further away. You will need a taxi to reach there.

I stayed at the historic Cecil Hotel in Alexandria. It is located on the Corniche and has welcomed guests like Winston Churchill and Omar Sherif in the past.

Things to do in Alexandria

The best time to Visit

Alexandria has a Mediterranean climate that makes it suitable as a year-round destination. The winters, however, can be quite cold. The best time to visit Alexandria is spring (March-early June) and autumn (September-November).