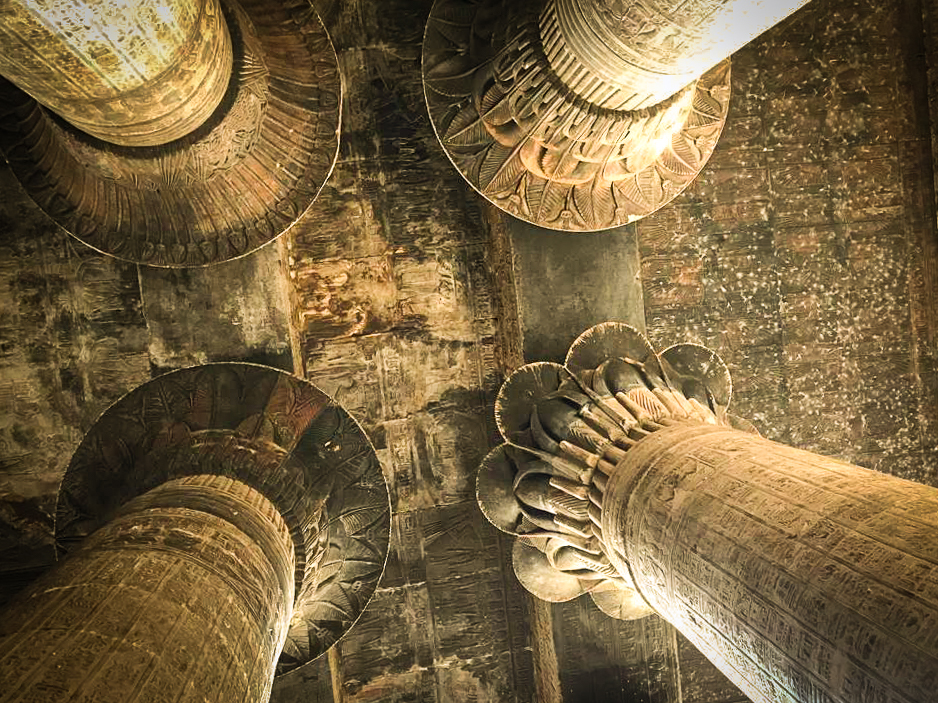 The beautiful temple of Khnum at Esna

I never knew about the temple of Khnum until my friend mentioned it. He is my school friend and he visited us in Cairo last year with his wife. All of us did a nice road trip together and it started from Aswan and ended in Luxor. The route was like this: Aswan – Kom Ombo – Edfu – temple of Khnum in Esna – Luxor. It was half a day drive and although the trip was thoroughly enjoyable, the heat made us exhausted. To be honest, I was not sure of what to expect at Esna when the temple of Khnum arrived. Heat exhaustion nearly tempted me to stay put in the comfort of the air-conditioned car, when a last-minute decision made me change my mind. And I am glad that I did because the temple of Esna was one of the most beautiful in Egypt.

Khnum, the ram-headed god of creation

The temple of Khnum at Esna is dedicated to the ancient Egyptian ram-headed god who created humanity on his potter’s wheel. It was commissioned by Ptolemy VI Philometor (180–45 BC) and the Romans later added the hypostyle hall. Incidentally, that is the only part of the temple that has been excavated and can be visited today. It sits in a 9m-deep pit from where the temple was excavated from underneath 15 centuries of sand and debris, being abandoned during the Roman period. The temple of Khnum was once connected to the Nile via a quay which was built by the Roman emperor Marcus Aurelius.

A Greco-Roman temple of Khnum

The foreign influence on the temple of Khnum is very visible and this makes it stand out. Esna was one of the most prestigious cities in Egypt during the Roman and Ptolemaic periods and the temple faithfully features Greco-Roman designs. Today, the temple sits like a wedding cake in the middle of the excavated pit and the central doorway leads to a vestibule the roof of which is supported by stunning 18 richly engraved columns. The columns make the temple very unique and each has beautifully varied capitals in the shape of palm leaves, lotus buds, papyrus fans, and bunches of grapes (a distinctive Roman design). The roof is decorated with astronomical scenes and hieroglyphic accounts of temple rituals cover the pillars. On the walls, one can see Roman emperors dressed as pharaohs make offerings to the local gods of Esna. The most interesting engraving can be seen on the northern wall. It depicts the Roman emperor Commodus catching fish in a papyrus thicket with his deity and presenting to the god of the temple to Khnum.

‘All are formed on his potter’s wheel, their speech different in every region but the lord of the wheel is their father too.’

The most unique feature of the temple of Khnum is the dedicated practice of worship of an ancient Egyptian deity by foreigners. The Ptolemies (Greek) and the Roman rulers of Egypt tried to win over the locals by following their traditions and this temple of Khnum is the perfect example of such integration. In fact, two special hymns are inscribed inside the front corners, besides the smaller doorways. The first is a morning hymn dedicated to and the second ‘hymn of creation’ that acknowledges him as the creator of all, even foreigners: ‘All are formed on his potter’s wheel, their speech different in every region but the lord of the wheel is their father too.’

Nowadays the town of Esna is famous for its barrage bridges built on the Nile by the British in 1906 and the “Electricity Bridge” built in the 1990s.  It is usually a stop on Nile cruise tours passing by the city. Some cruises offer a half-day excursion of the temple of Khnum to its passengers.

Entrance Ticket Cost: 80 EGP adult; 40 EGP student
Camera Ticket: There is no camera ticket for this site. Photography with all kinds of cameras is allowed at no extra cost.
Ticket Booth: The ticket booth is located on the Nile River, near where the cruise ships dock. From here, it is a short walk down a shopping street to get to the temple.

Small group day trips to Esna temple of Khnum are available from Luxor. Alternatively, you can rent a car with a driver and a guide for a visit to this beautiful temple.