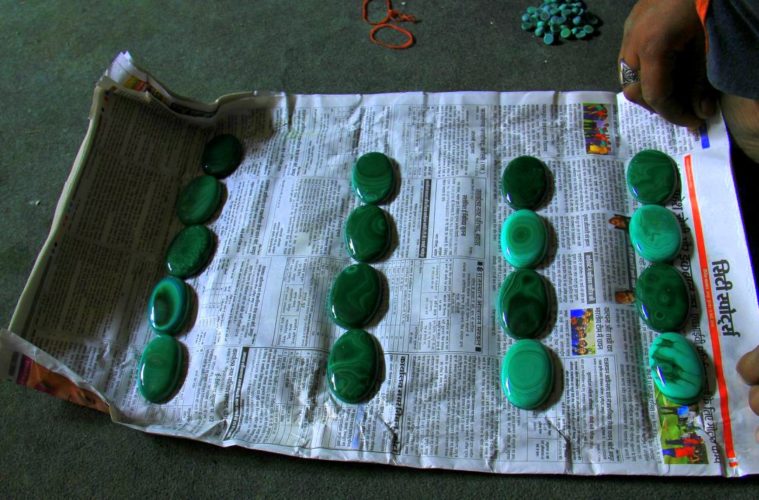 Gem cutters and jewellers of Jaipur

“Do you want to look at some stones? Just look. You don’t have to buy.” One hears this at nearly every corner in Jaipur and the Pink City is crammed with gemstones and jewellery shops. Gorgeous, opulent jewellery, in fact, greets one at the airport and immediately gives you the feeling of entering a rich, royal zone. The Pink City is indeed one of the gem capitals of the world and the jewellers of Jaipur are reknowned for their flawless precision. The history of Jaipur’s gem industry is quite old and it goes back to the 18th century. Jaipur was ruled by Maharaja Sawai Jai Singh at that time and he was responsible for much of the city’s physical and economic growth. A great patron of arts and craft, the far-sighted king invited jewellers from all over India to set up shops in the city and thus paved the way of sustaining Jaipur’s flourishing gem and jewellery trade.

How the jewellers of Jaipur revived the gem industry

This thriving trade, however, faced major setbacks in the first half of the 20th century during which many of the jewellers of Jaipur have struggled to stay afloat. The international conflicts of that period caused a sharp drop in the availability of gemstone imports, the growth of foreign markets, and the development of the synthetic jewellery industry nearly killed this beautiful traditional art of Jaipur. Thankfully, the existence of a strong gem workers’ associations and a commitment to continuing the high-quality training and import business managed to keep the industry alive and even thrive as one of the world’s most important gemstone centers.

The bespoke and mass jewellery of Jaipur

Today nearly eighty percent of the world’s precious and semi-precious stones pass through Jaipur for shaping and polishing on their way to market and many international designers go there to buy their jewels and have their own designs made.  The jewellers of Jaipur take pride in creating designs in which they reflect their rich heritage and offer extraordinary pieces and private collections which are viewed only upon request. The Pink City, however, also caters to the masses and the Jaipur gemstone and jewellers have a dazzling array of gems and jewels suitable for every budget.  The bustling bazaars of the old city are crammed with all sorts of treasures and one can spend hours staring at stunning jewellery being displayed at dust-coated shop windows of Johri Bazaar.

The stunning Kundan jewellery of Jaipur

The world-famous creations of the jewellers of Jaipur

The best jewellers of Jaipur can be found at Chameliwala Bazaar (silver market), Maniharon ka Rasta (lac bangle lane), in the heart of Jaipur’s Pahar Ganj quarter, and within the pink walls of the Old City’s bustling bazaars. Lathe machines toil busily in hundreds of tiny workshops and emporiums, where jewellery designers and craftsmen shape and polish the gemstones and precious metals. Jaipur’s gem trade rests on their scrutinizing gaze and the artists patiently work rough stones into brilliant jewels. The main thoroughfare of the old city, Johari Bazaar is lined with tiny emporiums, each selling ornate wedding jewellery, heavy strings of precious and semi-precious stones, traditional Rajasthani ornamentation and Jaipur’s signature meenakari: lacquered and coloured enamelled pieces often inlaid with precious gems. A walk through Johari Bazaar brings you fascinatingly close to some of the world’s most beautiful gems and you can run your fingers over glittering Tibetan turquoise, African garnets and tourmaline, and citrine stones. The jewels hanging as thick strands or nestling in velvet boxes, glint seductively and the strong Jaipur sun bounce off their brilliantly cut edges.

A gem worker at work

The precious stones are often sold at unbelievable 15 and 100 rupees (1-2 USD) per gram and the price depends on the weight, clarity and the type of cut used. The globally imported gems are cut and polished according to the local specifications in the city’s workshops around the Old City’s Pahar Ganj and Bapu Bazaar areas. Some of these workshops are sort of mom and pop stores and entire families are employed in the trade. While some family members cut and sell the stones, others are employed in selling them. Interestingly, every morning on weekdays, a gem auction is held near Bapu Bazaar and one can see men selling precious stones from sheets spread on the pavement. Despite this precious inflow, very few of these gems are mined in India and Jaipur jewellers carry on a prosperous import industry to keep the local mining trade afloat.

You may also like: PANNIGARS OF JAIPUR: THE STORY OF EDIBLE GOLD AND SILVER

Rough precious stones waiting to be cut and polished

The process of gem cutting

Though the process of gem cutting exudes exotic ideas, in reality, it is a very sterile procedure. First of all, the precious stones are procured from all over the world, especially Bangkok, Brazil, and Africa, before being cut into desired shapes and sizes. Then their impurities, spots, and blemishes are removed. the cutting process involves a general hacking into a basic shape and then a second machine creates sharper edges which produce those scintillating sharpness. The final stage involves polishing and buffing the stones before getting them ready to be displayed in shops or put into jewellery.

You may also like: JAIPUR HAND BLOCK PRINT: BEAUTY IN SUSTAINABILITY

There was a time when Jaipur was famous only for the cut and polished precious and semiprecious gemstones. Over the years, however, but the Pink City has earned a reputation for its high-quality gold, silver, and coloured stones. The industry’s skilled craftsmen work with silver and gold to make ready to wear collection along with exquisite bespoke pieces. Since the metalwork is not an expensive affair in Jaipur, jewellery aficionados go there to have some special designs made for them. A timeless trade and the most important, jewellers of Jaipur celebrate this profession by holding the annual Jaipur Jewellery Show which is the biggest B2B platform of its kind.