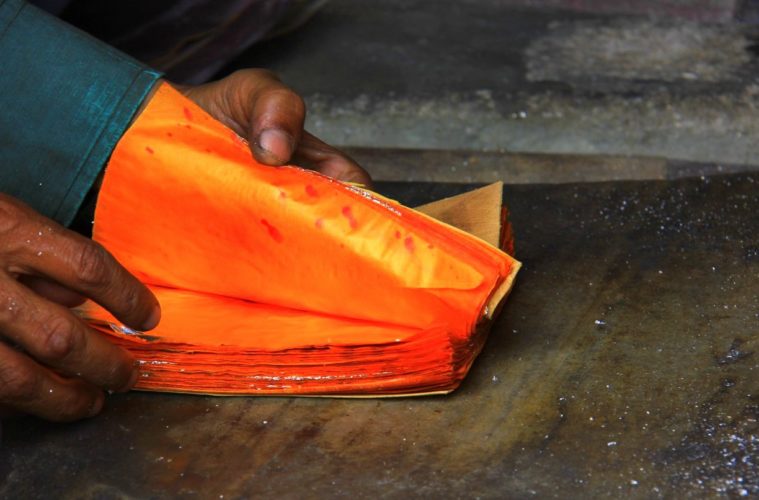 Pannigars of Jaipur: the story of edible gold and silver

As a child, one of my favourite fun things was to try taking off the silver or gold foil which decorated the Indian sweets. Irrespective of the place or occasion, I would engage in my activity happily for hours and more than once left entire trays of sweets looking plucked from the top. There was such a rich sensation of eating actual gold and silver that it made me feel like a princess and as a child, there was nothing I liked better than a make-believe game of having my own castle. With age, the habit of flicking the precious foil stopped, though I still love traditional sweets which are decorated with shining bits of gold and silver. Thus it was no surprise, that I would visit the lane of silver and gold foil makers in my last visit to the Pink City and the pannigars of Jaipur opened my eyes to the famous statement, “all that glitters is not gold”.

The dedicated pannigars of Jaipur

Recently I wrote about understanding cultural appropriation in Jaipur and the visit to the pannigars showed me the harsh realities of “poor people, rich trade”. Though it may sound like a derogatory statement by itself, allow me to explain that my expressions mean just the opposite. By “poor people, rich trade”, I mean the underpaid overworked craftsmen who are in labour-intensive trades which do not get them much material benefit. They do not get rich by it neither do their working conditions improve, though the fruits of their hard work are often sold at exorbitantly high prices. Despite, all this, they continue to toil every day and the only satisfaction, they receive is the pride of carrying on their precious craft which has been practiced by his fore-fathers. The pannigars of Jaipur definitely belonged to that category and after my visit, I have not been able to relish any silver-gold foil topped sweet without a word of thanks to the hard-working dedicated artists.

The glittering varakh or silver and gold foil

The silver and gold foils are traditionally called varakh in India and they are used for cladding and decorating sweets, rich biriyanis, paans, etc. The making of varakh is a very old technique and it is popular throughout the country. Varakh is also used in Ayurvedic medicines which emphasizes on the medicinal qualities of some metals like silver. Both men and women are involved in making this art though I saw only male pannigars of Jaipur. It was during my handicrafts tour with Dinesh, a trusty and knowledgable autorickshaw driver, that I came upon rows of people practicing this timeless craft. Before that, I had never really thought much about its making and by default considered varakh to be machine-made (which also exists).

The pure gold foil which you can eat
PC https://www.satyapalgroup.com

A dingy community full of silver and gold

The reality is that varakh is very much man-made and it is a back-breaking task. I could hear the synchronized bang-bang of pannigars hammers even before I reached their lane and suddenly it felt I was drowning in metallic sound. The area or rather a tangle of lanes is called Pannigaaron Ka Mohallah and it is located near Subhash Chowk in Jaipur. The locality houses the Pannigars of Jaipur and the narrow lanes are filled with the constant sound of hammering. The craft of making fine varakh is mainly practiced by the Muslim communities and there are around 200 Pannigar families in Jaipur. They make varakh in small workshops built inside their houses and dwell in civic conditions which belie their rich trade.

You may also like: The beautiful Jaipur Blue Pottery

A pannigar placing the silver strip inside his auzaar PC  http://www.dsource.in

How is it to drown in precious sound?

You would really think that people who work in silver and gold would have open sewers right outside their workshops or sweat it out without air-conditioning in Jaipur’s terrible summer heat. But there they were, hammering away in unison in the cocoon of their street fronted workshops while looking at the world go by. Their wrists bearing small hammers flew up and down on a sheaf of cloth wrapped foils in front of them and such was their expertise that they could even shoo away a curious goat away from their shop with a simple flick of the freehand. Thus, they hammered, watched, shooed, read, gave instructions to their family members, and explained the process of varakh making to me. All this happened at the same time and I could only stand there in awe in the midst of incessant hammering, tooting autorickshaw horns, and bleating goats.

The most essential tool for making varakh is a book with 160 pages in which small bits of silver and gold are kept for hammering. It is called an Auzaar. The pages of auzaar are made of fine, treated outer skin of sheep or goat. The skin is specially treated with a liquid made from boiling herbs like saffron, mace, clove, sugar, milk, edible colours, etc. The animal skin is dipped in this liquid for a few days, before being taken out for drying after which edible colours are applied to make it look nicer. As hypocritical as it may sound, but after this treatment, the skin is not considered as a non-vegetarian or animal-sourced item and the countless prudes of our country choose to believe that varakh made in this way is absolutely pure (read vegan). Around 160 auzaars are kept inside a cover called Pushti and this is made with fine precision since the slightest mistake affects the quality of the varakh.

The hammer and the gold biscuits

Then there is the quintessential hathodi or the metal-head hammer which is used to beat the book holding silver and gold bits. A steel cutter or phalua is used to cut the foil after shaping it a chep or bamboo plucker holds the auzar while the varakh is being cut. A string of beads called chadaa is rubbed on the varakh coated metal products to give them a sheen and then there are the actual gold and silver biscuits called dali which are hammered into varakh. The only tools which I found the pannigars of Jaipur wearing on themselves were  Paibandi or a small leather finger cover and Makol powder on their hands. Both were more for the product than for the craftsmen and were used for preventing the varakh from sticking to the skin while it was being cut.

The process of making gold and silver paper

According to the pannigars of Jaipur, whom I met on my handicrafts tour, the making of varakh involves five steps: the making of rods, followed by the strips, hammering the varakh, cutting the foil into shape, and packaging. First, a pannigar buys dalis or silver and gold biscuits. These are then melted into a liquid to be poured into thin rod-like moulds. The rods are pressed to make fine strips of 1-inch width. Pannigars then cut small pieces from these strips and place them on every page of the book or auzaar. The placement is done manually so that each piece of silver/gold is over the other. The auzaar is kept in the Pushti or the leather cover and the flap is closed by applying a little amount of water on the surface. Then the hammering begins. A good pannigar always aims his blows to one exact spot on the cover and after some time, when auzaar is re-opened, the placement of the increased/expanded pieces of silver/ gold is changed. Hammering resumes and the entire process is repeated until the desired size is obtained. The auzaar is then sent for cutting of varakh and for packaging. In one day an artisan can make up to 2-3 booklets.

Pushti or the leather cover inside which the auzaar is inserted
PC http://www.dsource.in

As dingy and derelict, Pannigaron ka Mohalla was, it was difficult to leave from there. The whole atmosphere of the rhythmic hammering drowning the working locality is impossible to describe in words and there was a lot of energy flowing through those quarters. Those were good energy; aura which is timeless and came from dedication and love for centuries-old art. The movement of the Pannigars of Jaipur was singularly sluggish as if the whole community was in some kind of slow-motion movie and time seemed to have stopped there. In retrospect, I like to believe that perhaps the time had indeed stopped there; otherwise, how can you explain in any logical terms, the survival of such an ancient art in today’s busy industrialized world. Some things are best left unanswered and my only wish is that somehow the pannigars of Jaipur may one day not have to leave their art for the sake of greener pastures. That is for time to tell.

Silver strip pressed from a rod before being cut into smaller bits
PC  http://www.dsource.in

Small pieces of metal are placed on top of each other on every page of the auzaar
PC  http://www.dsource.in

The Pushti covered auzaar is beaten for some time before the placement is changed
PC http://www.dsource.in

The metal piece is hammered into the desired size
PC http://www.dsource.in

Before being cut, turned inside out,
PC  http://www.dsource.in

There is a very interesting video on pannigars of Jaipur. You can check it out here.