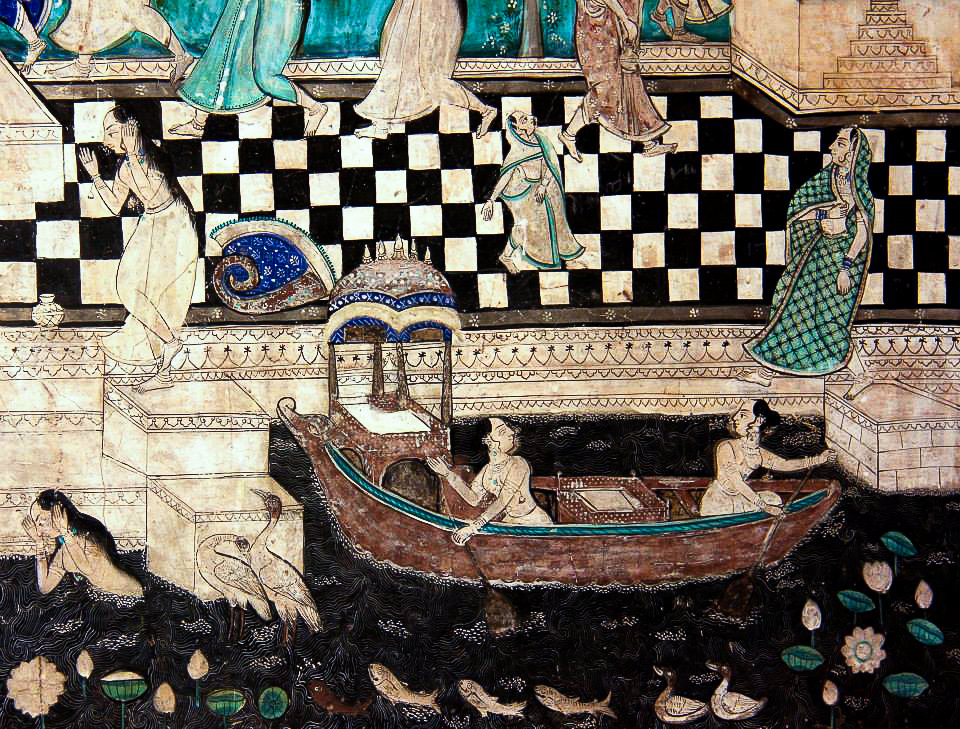 Garh Palace of Bundi and its treasure of paintings

Located below the Taragarh Fort is the famous Garh Palace of Bundi. It is a big complex that has a number of small palaces built around the main royal residence. These have been added by various rulers over the centuries. the Garh Palace is one of the few royal abodes in Rajasthan that remained untouched by Mughal influence. The complex looks as if it is cascading down the slope since it is built on terraces on a small hill and the effect is quite photogenic. Today, most parts of the palace lie in ruins and only a small portion still retains its majestic splendour. Just like Taragarh Fort, Garh Palace seems to be slowly being reclaimed by nature and the grounds are covered with overgrown waist-high grass. amidst overgrown grass. A wall surrounds the palace complex, making it seem more like a fort than a place of leisure and it was no wonder that initially, I mistook it to be a part of the fort complex.

A brief history of Garh Palace

The construction of the Garh palace was begun in 1580 Raja Rao Ratan Singh Hada and over the centuries his successors expanded the complex. The royal family occupied a part of it until 1948 after which this extraordinary edifice went into slow decline. Today, apart from the neglected rooms that are occupied by bats, most of the complex is a treasure trove of magnificent murals. These chambers hold a series of fabulous, fading turquoise-and-gold murals that are the palace’s highlight. These murals belong to the Bundi school of painting, an important school of the Rajasthani style of Indian miniature painting. The blend of Mughal and Deccani art elements in Bundi style is unique. Bundi paintings are small and are executed meticulously with delicate brushwork. These are painted with natural colours that are sourced from minerals, vegetables, precious stones, silver, and gold.

Garh Palace in a nutshell

A steep path from the town leads you to the main gateway, Hathi Pol. The principal courtyard of the Garh Palace lies beyond this gate. From here, on the right-hand side, a flight of steps will lead you to Ratan Daulat. It was built in the early 17th century and served as Diwan-i-Am or the Hall of Public Audience. It is an open terrace with a simple marble throne and overlooks the courtyard below. More steps lead one down to Chatra Mahal, which was added by Rao Raja Chatra Shabji in 1644. Walk into the open-sided pavilion on the eastern side of the courtyard, pass the room beyond and you will enter a little antechamber that is covered with fine murals dating back to 1780. Every inch of the surface of the room is covered with finely detailed murals that are embellished with gold and silver leaf. A narrow flight of steps from the Chatra Mahal courtyard leads up to a smaller courtyard. This one is flanked by the superbly decorated Phool Mahal that was constructed in 1607. Its magnificent murals, however, were added in the 1860s and these depict a vast procession featuring regiments of soldiers in European dress and a complete camel corps. A narrow flight of steps from the Phool Mahal takes one up to the Badal Mahal. Literally meaning the Cloud Palace, Badal Mahal of Garh Palace is known to have some of the finest paintings in the whole of southern Rajasthan. A vividly coloured ring of Krishnas and Radhas dance around the highest part of the vaulted dome, flanked by murals showing Krishna being driven to his wedding by Ganesh, and Rama returning from Sri Lanka to Ayodhya. Located just above the Garh Palace is the pièce de résistance of the complex. It is the Chitra Shala or the Art Gallery. It is a small courtyard embellished with an outstanding sequence of paintings in an unusual muted palette of turquoises, blues, and blacks. The dominating theme is Hindu mythology and the paintings depict scenes from the life of Krishna. A small flight of steps from the rear end of the garden leads one to Chitra Shala.

I recommend visiting the following areas within the palace:

Paintings inside the Garh Palace

The bloody history of a lovely palace

For a palace with such lovely interiors, you would think of it as having a fairy tale past. Garh Palace, however, has a cadaverous history, and some of its legends are quite bloody. The most famous among them and one that never failed to shock me as a child is that of Hada Rani. She was a newlywed bride whose king was going to battle. Hada Rani’s husband didn’t want to leave her and he returned from the battlefield to be with her. When she heard of his return, she was filled with disgust, since a true Rajput never leaves the battleground until victory or death is his. As a response to this romantic gesture, Hada Rani chopped off her head and had it sent to her husband just as he entered the gates of the palace. So much so for fairy tale romances and tales of living happily ever after. Hada Rani of Garh Palace really killed romance.

View of Bundi town from Garh Palace and Taragarh Fort

Reflection of Garh Palace on the lake