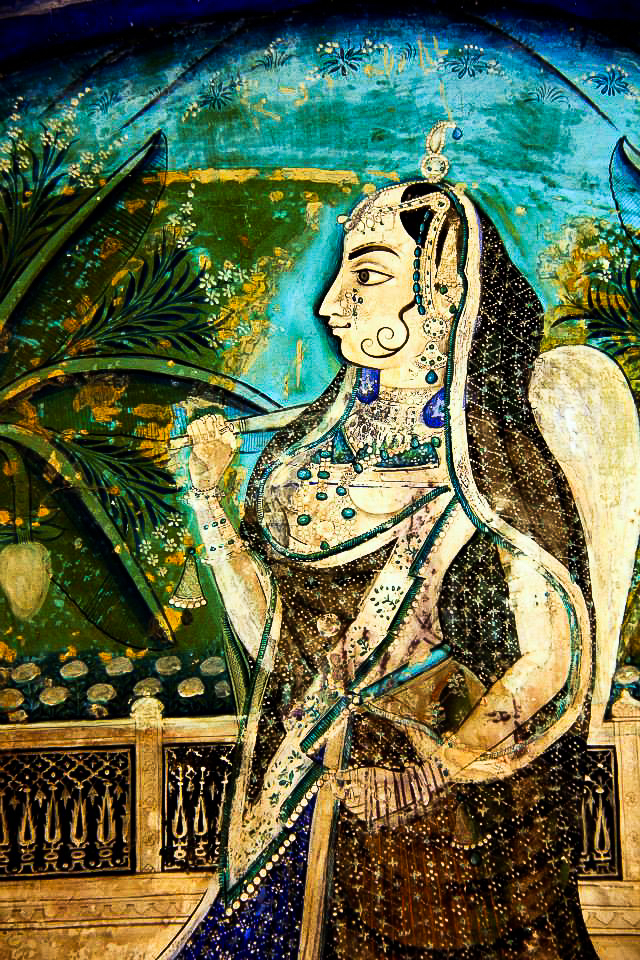 Not many people know that I paint and even fewer are in the secret that my specialty was miniature painting. I love the dedication and patience that goes into these intricately detailed paintings and since these are miniatures, each brushstroke takes immense focus. Nowadays, I hardly find time to paint miniatures and to compensate for the void, I go mural hunting in nearly every destination I visit. Thus it was no wonder that I visited Bundi to see the Bundi paintings of the palace and it is one of the most beautiful cultural experiences of my life. Of all the historic miniature styles found in India, Kangra and Bundi paintings are my favourites and with a visit to Bundi, at least one of my miniature painting bucket lists came true.

A brief history of Bundi paintings

An important school of the Rajasthani miniature painting, Bundi paintings are famous for their flawless colour palette and excellent formal design.  A prolific and distinct school of painting, it flourished in Bundi and later in neighbouring Kota from the 17th century to the end of the 19th century. The Bundi royal court was one of the earliest princely courts to accept the Mughal rule and the earliest examples of Bundi paintings (c. 1625) show a blend of Rajasthani facial features with Mughal influence on the backgrounds. In richness and brilliance, Bundi painting is heavily influenced by the Deccan style since the rulers of Bundi, Kota, and Deccan area were often in contact. The earliest Bundi paintings – namely the Chunar Ragamala dated 1591 belong to the formative phase and these have been painted at Chunar during the reign of Bhoj Singh (1585–1607), the Hada Rajput ruler. The artists of the Bundi school always show a deep preference for vivid movement and towards the second half of the 17th century, Bundi came under the influence of Mewar. Many Bundi miniatures from this period, including several series illustrating the Rasikapriya, indicate that this was perhaps the golden era for Bundi paintings. The neighbouring state of Kota at that time also grew to be an important center of the painting and it produced numerous miniatures depicting hunting and sports scenes, all of which were filled with great vigour and surging strength. This school continued well into the 19th century, and despite the deteriorating workmanship, the style maintained its integrity until the end.

One of the most beautiful examples of Bundi paintings

How it developed over the centuries

Technically speaking the Bundi school blossomed under the patronage of two Rao Chattar Sal (1631–1659) and his son Rao Bhao Singh (1659–1682). Under the rule of his successors, Aniruddha Singh (1682–1702) and Budh Singh, the Bundi artists started getting more experimental and innovative. Bundi paintings entered the most accomplished phase during the reign of Umed Singh (1749–1771), during which the style acquired refinement in the intricacies of details. During the 18th century, Bundi paintings developed Deccani aesthetics and the use of bright and vivid colours became prominent. Umed Singh’s successor Bishen Singh (1771–1821) was a connoisseur of art and he loved to hunt. Thus the Bundi paintings started featuring hunting scenes and wild animals. Under his successor Ram Singh (1821–1889), the Chitra Shala of the Bundi palace was decorated with paintings of royal processions, hunting scenes, and episodes of Krishna’s story.

The characteristics of Bundi paintings

The area around Bundi is hilly. Fast-flowing rivers cut gorges there and the hills are covered with forests and dense greenery. These natural surroundings proved conducive to a picturesque landscape and the Bundi painters used these features repeatedly in their paintings. Thus, the Bundi paintings are characterized by a fondness for lush vegetation with varied flora, wildlife, and birds, dramatic night skies, a distinctive way of depicting water by light swirls against a dark background, and vivid movement. Bundi artists maintained their own standards of feminine beauty and the women depicted in the Bundi paintings are petite with round faces, receding foreheads, sharp noses, full cheeks, sharply penciled eyebrows, and a ‘narrow’ waist. They wore costumes consisting of a long skirt-like ghaghra, a very high choli blouse, and an odhni or a veil. Black tassels are attached to their wristlets and armlets and they are exquisitely bejewelled especially in pearls. Mughal mannerisms, such as shading below the armpit can be seen and both men and women are seen in a variety of turbans. The paintings are composed either in open courtyards or inside pavilions with lush green vegetation as a backdrop.

The themes and what they stand for

The themes of Bundi paintings are varied. Love was depicted through the religious subjects such as Krishna and Radha and courting royal couples, often shown in romantic poses. Women were shown as subjects from Rasamanjari, a treatise that deals with the classification of heroines (nayikas) according to their age, physiognomic traits of appearance, such as padmini, chitrini, shankhini, hastini, etc., and emotional states, such as khandita, vasaksajja, abhisarika, utka, etc. Many Bundi paintings also follow the themes from Rasikapriya, another medieval treatise that was composed to incite aesthetic pleasure to elite courtiers. Rasikapriya explores different emotional states, such as love, togetherness, jilt, jealousy, quarrel, separation, anger, etc., and these are represented through the characters of Radha and Krishna. Perhaps the loveliest of Bundi paintings themes is Kavipriya. It is a tale of love and in its tenth chapter ‘Baramasa’, there is some alluring climactic description of the 12 months of the year. Kavipriya theme of Bundi paintings shows the daily life of people in different seasons with allusions to the corresponding festivals and the nayika -heroine- requesting the nayaka -hero- not to leave her to go on a journey. There are also pictorial interpretations of ragas and raginis (ragas and raginis are musical compositions envisioned in human form) through Ragamala paintings. The other themes include court -darbar- scenes and historic moments, hunting expeditions, wars and victories, picnics, garden parties, dance and music performances, rituals, festivals and wedding processions, portraits of kings, birds, and animals. Bundi artists were experts in painting elephants and they produced some exquisite studies of elephants in fury, engaged in an intense battle, or escaping through narrow gateways.

A Bundi painting of a woman at her toilet

Like all Indian miniature paintings of that time, Bundi paintings were painted on waslis. These are layered, thin sheets of handmade papers glued together to get the desired thickness. The outline was sketched on waslis in black or brown. This was followed by adding colours by brief notations or sample patches. The colours used were all organic and sourced from minerals and precious metals like gold and silver. The powder of these materials was mixed with glue as the binding medium. Camel and squirrel hair brushes were used and upon completion, the painting was burnished with agate. This gave the painting a uniform sheen and an appealing vibrancy. Bundi paintings like all miniature paintings activity of that time were done through teamwork. The master artist composed and did the preliminary drawings while his pupils or experts of colouring, portraiture,
architecture, landscape, animals, etc., took over in turns to do their bit. Each painting was completed by the master artist by putting the finishing touches. Finally, the scribe would write the verse in the space left
for the one.

Paintings inside the Garh Palace

The chronology of this art

The discoveries of certain inscribed and dated paintings toward the middle of the 17th century helped to reconstruct the development chronology of Bundi paintings. These include the Nobleman and the Lady Watching Pigeons (1662), Lovers in a Pavilion (1682), and Lovers Pointing to the Crescent Moon. According to the legends, in 1605 Akbar, pleased with the obeisance of Bundi, gifted the royal family, three master painters from Chunar near Varanasi. These painters who had previously worked only on palm-leaf manuscripts changed their medium and started painting frescoes like those at Badal Mahal and Chitra Shala. This zeal soon spread through the city, across classes, and through time and thus was born the beautiful Bundi paintings, one of the loveliest schools of miniature paintings in India.

The frescoes inside Taragarh Fort are in very bad shape

Where to see the Bundi paintings in Garh Palace

For more beautiful photos of the Bundi paintings, check out this photo essay