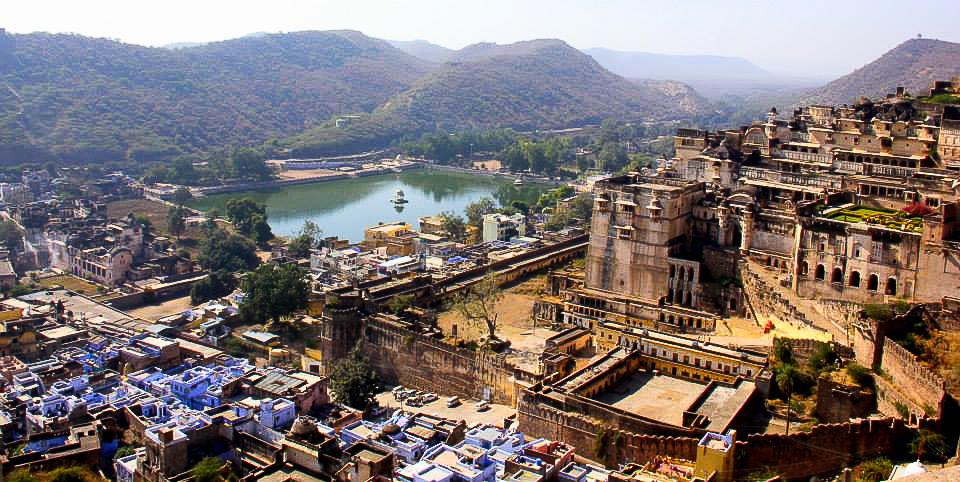 Before Bundi was conquered by Rao Deva Singh in 1241, it used to belong to the local Meena and Bhil tribes. After the conquest, it became a part of Hadoti – the land of the Hadas, which was a major branch of Chauhan AGnikula Rajputs (also known as the fire dynasty). They were prolific conquerors and soon the entire southeast region of Rajasthan came to be known as Hadoti. The Hada Rajputs established Hadaoti and soon Bundi town was born. A particularly timeless charming place, Bundi town was established in Bando Naal or the narrow cleft of the Aravali Hills. Its location adds to the medieval aura that surrounds the town and it seems untouched by time.

A view of Taragarh fort in Bundi town

The charms of Bundi town

The landscape of the area is dramatic. The Bundi town is surrounded by a lot of forts, many of which are in ruins. The grandest of them all is the Taragarh Fort, a grand legacy of the local Rajputs. Close to it tucked away in the narrow valley, lies the Bundi Fort. Its massive ramparts outline the crest of the hills and from there, one can take in the stupendous views of Bundi town, purple hills, and the Jait-Sagar Lake. The 4-kilometer long Jait-Sagar Lake is aptly named after the Sukh Mahal, a crumbling palace that teeters on its edge. Apart from the scattered Rajput edifices like palaces, and stepwells, Bundi town also has an 84 pillar cenotaph called the Chaurasi-Khambon-ki-Chhatri. This magnificent cenotaph was constructed in 1683 by Rao Raja Anirudh, the Maharaja of Bundi, in memory of his nurse, Deva, under whose love and guidance the prince grew up.

Bundi town has a lot of stepwells

The first thing that comes to mind at the mention of Bundi is the lovely Bundi painting. A school of Rajasthani painting that started in the 17th century and flourished till the end of the 19th century. It is a style of miniature painting practised in the princely state of Būndi and its neighbouring principality of Kotah (both in the present state of Rajasthan). The Bundi school paintings are characterized by lush vegetation, dramatic night skies, a distinctive way of depicting water by light swirls against a dark background, and vivid movement. The Bundi palace and the Chitra Shala have a treasure trove of these paintings and their walls are covered with magnificent murals. One almost feels carried away into the medieval time when looking at these delicate murals as decay and disrepair surround from all sides.

Bundi town and its timeless charm

Decay is another poignant feature of Bundi edifices. This is not a place that has immaculately preserved heritage like the kind you find in Jaipur, Udaipur, etc. Decay and disrepair mark much of Bundi’s old monuments and the juxtaposition of these with brilliant murals, startling reflections on the lakes, and purple hills ignite one’s imagination. The quaint Bundi town of today also adds to the aura of timelessness. It has blue houses that line the labyrinth of lanes, temples, gnarly banyan trees, and lively markets. Tea shops see the same patrons every day and even the wandering cows have a set routine. They start their amble at a particular corner, walk down the same path, and rest at the same spot every single day of the year. Violet mornings dawn over Bundi town with light mists and fluttering of pigeon wings and evenings create lovely ochre reflections of the fort on the still waters of the lake.

A little way from the town, farmlands start; lush, green, and fertile land that produces vegetables, abundant flowers, mustard, and fruits. Orchards surround the town and beyond that wilderness begins. It is the land of Rudyard Kipling’s ‘Kim’, a region of rolling forested hills, tribal hamlets, and wildlife, including an occasional tiger or two. All these make Bundi town and its surrounding areas one of southern Rajasthan’s most appealing destinations.

Sunrise seen through a lane in Bundi

The decaying cenotaphs are scattered in Bundi

Bundi is an offbeat gem of Rajasthan