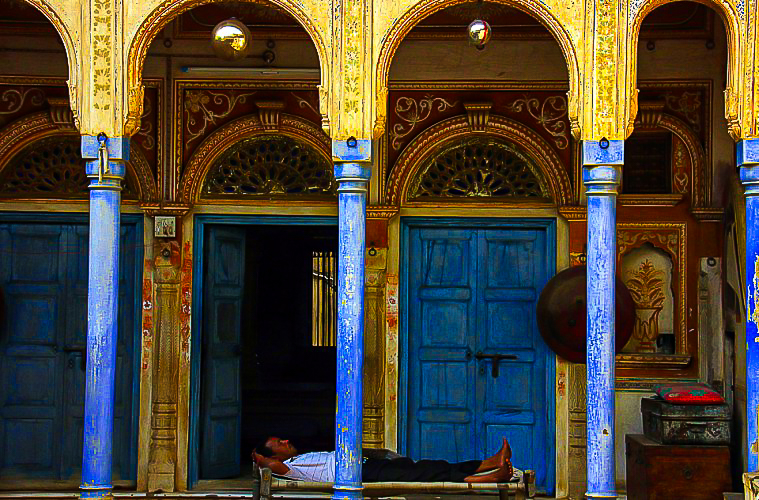 My Shekhawati travel was really offbeat. I visited there last year when hints of spring had been around the corner and it was perhaps the best time to explore the open-air museum towns of the region. For an immensely popular tourist state like Rajasthan, Shekhawati was surprisingly quiet and relatively unexplored. Although I no longer remember how I came across the intrepid jewel, my impromptu Jaipur morning decision to hire a car to drive there was a very good one. My destination was Mandawa, one of the better-known villages of Shekhawati region and it took me around four hours to reach there by road. The drive was quintessentially Rajasthani, with unending stretches of semi-arid landscape dotted with camels, wobbling turbans and dazzling neon coloured veils and it looked very windswept.

The painted havelis are the real highlights of Mandawa.

Being located in the nontouristy northwestern part of Rajasthan, the road conditions were intermittently bad and slowly the rural arable land gave way to windblown undulating sandy dunes which were covered by only khejri trees. The roads got worse with huge craters and potholes, as I ventured deeper into my Shekhawati travel, yet the spring prettiness calmed me down. The thorny, scraggly trees were flowering at that time and masses of orange blossoms covered them like shady umbrellas. They were scattered on the ground like small carpets of petals and occasionally tiny hutments could be seen between them. Thorn woven boundary walls ran neatly around the mud huts and skippy goats rested in shades. Here and there camels sat stooped under the thorny branches and women carrying pots of water on their heads walked past them.

A brief history of the region

It was an arid, inhospitable land, cruel in summer and freezing cold on winter nights and more than once, I  wondered if my drive was worth it. Famous for being a magnificent open-air museum, Shekhawati region had the largest concentration of frescoes in the world. Although a “lost kingdom” aura dominated the scene that day, once upon a time it was a bustling caravan route that connected Delhi and Sindh (now in Pakistan) with the enterprising Gujarat ports. A part of the erstwhile kingdom of Dhundar (Jaipur), Shekhawati was ruled by descendants of the 15th-century Rajput lord, Rao Shekha, and the name was probably derived from his lineage. Shekhawati’s importance as a trading outpost peaked from the 17th to 19th centuries and the early 20th century saw money pour into its towns.

It is the land of camels and small bylanes

The trading towns of past glory

Having grown affluent on trade and taxes, Shekhawti’s Marwari merchants and landowning thakurs competed with each other in building the grandest mansions (havelis), stepwells, cenotaphs, and temples. These architectural gems were their homes and offices and they spent huge sums of money decorating them with murals from outside as well as inside. The result was a gorgeous network of little, dusty, almost forgotten towns whose single-track roads were crammed with grand, ostentatiously painted mansions, most of which were in a sadly derelict state. The region of Shekhawati was quite large and comprised of Jhunjhunu and Sikar districts. Although seemingly unimaginable, both the semi-arid districts held a treasure trove of architectural gems, and Mandawa, Fatehpur, Nawalgarh, Alsisar, etc were their most prominent towns. Mandawa was the most tourist-friendly and I stayed at an old restored haveli during my Shekhawati travel.

It was late noon, by the time I checked into the big, nearly empty Hotel Heritage Mandawa and dying sun rays dimly lit up its painted interiors. An old caretaker with a massive hearing aid and foggy, cracked glasses, opened the lock of the Sheesh Mahal (Mirror Room) with trembling hands and in the fading light, I wondered at what I had gotten myself into. The eerie lyrics of Eagles’ famous song, “Hotel California” ran through my head when the sparkling diamond-like interiors of Sheesh Mahal reflected me a thousand times. I fell in love instantly and having thrown my bags at a corner, explored the ornate, restored hotel to my heart’s content. A two-storied beautifully decorated haveli, Hotel Heritage Mandawa was all about ornamental pillars, gorgeous heavy carved doors, and colourful murals. Sunlit courtyards held rooms in rows and a lovely little marble fountain tinkled at the center.

Famous for painted mansions, Shekhawati is like an open-air museum

It was too picturesque for words and a perfect trailer of my next two days in Shekhawati. That night, as I lay under a million glass shards, a lonesome peacock called from somewhere and clucking noises of a camel driver returning home rang through the air. A quiet peace came over me like a softly falling veil and I was lulled to a long, restful sleep. It felt good to be there and calm, vintage and mostly forgotten, Shekhawati travel seemed like an exotic dream of India; too good to be true.

The details of Shekhawati havelis are mesmerizing

Beauty can still be found in every corner of Mandawa.

Beautiful inner courtyard of the Poddar Haveli in Nawalgarh

Thanks to the Shekhawati Project, Fatehpur is getting a revival.

Here are some glimpses of Shekhawati’s rich history.

Mandawa has a glorious past and is still a true mercantile town at heart.

These trading towns thrived under the Shekhawati Rajput chiefs and merchants.