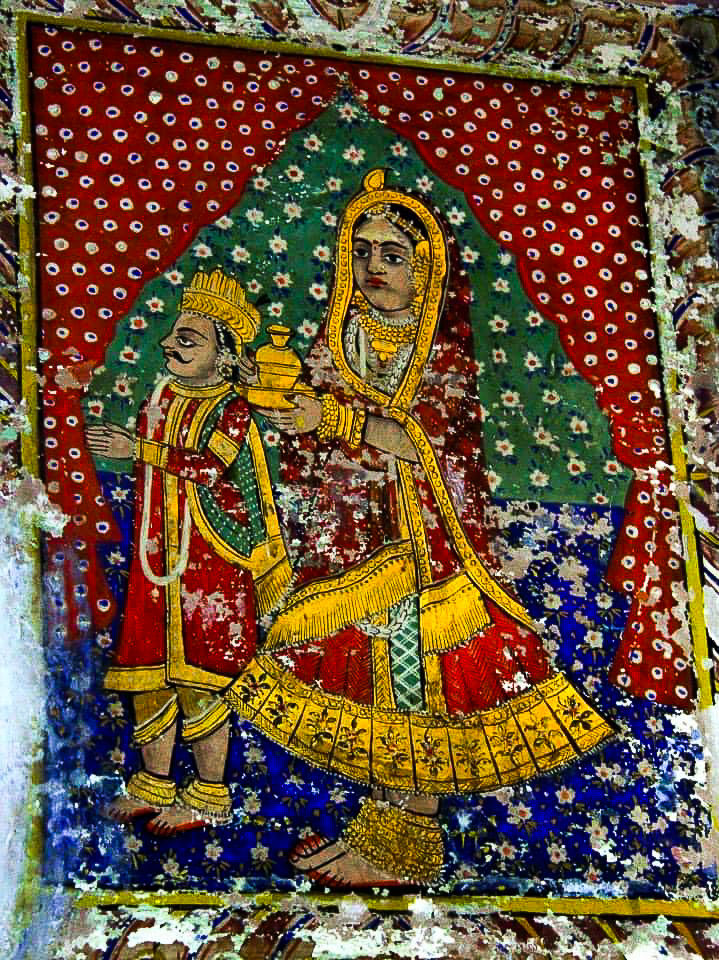 The crown jewel of Nawalgarh

The fame of the open-air museum of Shekhawati had set me off to this extraordinary place and this post on Nawalgarh is the fourth post in the series on “The Painted Towns of Shekhawati”. I had based out of Mandawa, one of the better-known Shekhawati towns, and had stayed at the gorgeous Mandawa Heritage Hotel. My first day featured Mandawa and the gorgeous Sona Chandi ki Dukan at Mahansar and the second day was spent exploring the gorgeous Nadine Haveli at Fatehpur. Shekhawati being quite a large area, my short itinerary of four days made me select only a few of the best-known sites. Since I strongly believe in saving the best for the last and my final Shekhawati visit to Nawalgarh turned out to be a very good idea.

Frescoes on the exterior of one of the mansions in Nawalgarh

A brief history of Nawalgarh

Located midway between Jhunjhunu and Sikar towns, Nawalgarh is the crown jewel of the Shekhawati region. It was also the hometown of some of India’s biggest industrialists’ families and thus had the most ostentatiously painted mansions. They were in very well preserved condition too and a few of them were professionally run by trust funds. Many consider it as the Golden City of Rajasthan and after seeing the beautiful golden glow of the old preserved havelis, it was not been hard to understand why. Founded by a Thakur Nawal Singh Bahadur in 1737 AD, Nawalgarh was a fortified town with high walls which had been surmounted by four gates or Pols. Iron gates made these entrances nearly impenetrable and the Bala Kila Fort occupied the center of the town. Fatehgarh Fort stood outside it and the well-laid-out lanes were interspersed with markets and havelis. Needless to say, it was a very planned city and that was due to the fact that Nawalgarh was also one of the youngest Shekhawati towns.

Beautiful inner courtyard of the Poddar Haveli in Nawalgarh

The differences in the Shekhawati frescoes

Since Nawalgarh was scheduled for the last day of my trip, I could not devote much time to it and I regretted that a lot. It was around early noon when I left the Mandawa heritage hotel for Nawalgarh and I did not look back even once.  I had disliked Mandawa and found Mahansar to be charming instead. Fatehpur’s opulence had bewildered me and during my drive, I wondered how Nawalgarh would fare in the Shekhawati travel meter. Despite the seemingly familiar styles of painted havelis and string of obscure frescoed towns, upon closer inspection and time, fine differences had emerged from the pattern. While Mandawa frescoes glowed with delicate pastel shades and Indian portraits in exquisite garbs, Mahansar frescoes were all about rich colours and semi-precious jewel tones. Fatehpur was more modern with a stark preference given to Indo-Western styles of clothing and European elegance.

Glimpses of the offbeat Shekhawati region

I passed many other Shekhawati towns and villages and they nearly all resembled ghost towns. Crumbling cenotaphs, dilapidated mansions, broken stepwells, and skeletal remains of forts dotted the windswept sandy landscape and they seemed from another era. Life seemed to have paused there and veiled women in dazzling skirts or black somber burqas walked down the streets. Men practiced generations-old professions and nearly the entire generation of young people seemed to have abandoned the painted towns for the cities. A few farms struggled against the extremities of nature and the tawny coloured camels blended in with the golden yellow of the undulating sand. Shekhawati was a strange forgotten time-warped place where tourists were nearly nonexistent and the curious locals tried to peek at my face through the tinted windows of my car. Unfortunately, it was early evening when Nawalgarh arrived and I knew I was too late even before I stepped out of the car.

The well-maintained galleries of Poddar Haveli in Nawalgarh

The crown jewel of Shekhawati

Nawalgarh looked exquisite and grander than all the Shekhawati towns that I had seen until then. The dying sun filtered long rays through old ornate lanes casting golden light over the erstwhile trading town. Passing footsteps and wheels rose dust in the golden air and they created a magical veiled aura. It was so beautiful that I walked about aimlessly until the famous Poddar Haveli arrived and I knew that it was one of the finest that Nawalgarh had to offer. An excellently restored haveli famous for its intricate frescoes, Dr. Ramnath A. Poddar Haveli Museum was a professionally maintained building with its own trust fund.

The Baithak of the Poddar Haveli in Nawalgarh

The Anandilal Poddar Haveli of Nawalgarh

Built in 1902 by Mr. Anandilal Poddar, the two storeys of the massive haveli held many galleries, and these rooms featured different aspects of Rajasthani culture. Turbans, local dances, schools of art, etc were showcased there and it was a well-maintained museum. Then there was the stunning beauty of the Poddar haveli and it was one of the most beautiful Shekhawati mansions I had seen. True to its architectural tradition, Poddar haveli had two open courtyards around which groups of rooms were circled. Beautiful woodwork embellished its doorways and the mansion’s heavy gates and doors were ornately studded with metal ornamentation. The gorgeous Baithak (Sitting Room) that had been left intact from its heydays was complete with plush velvet carpets, cushions, crystal chandeliers, and frescoes.

The sunlit upper balcony of the Poddar Haveli in Nawalgarh

Everything about Nawalgarh’s Poddar Haveli smelled of old money and the frescoes though freshly repainted stuck to their original Shekhawati themes. Bejeweled elephants, Hindu deities, opulently dressed men and women, horse carriages, trains, cars, etc covered every inch of the mansion and the checkered marbled floor balanced the over the top frescoed effect. The haveli’s second floor looked more Westernized and European influences were prominently visible in the arches, ornamental pillars, and lacy iron grills. It was the perfect finale for my Shekhawati trip and perhaps the loveliest place to catch a desert sunset. Being open courtyards, the gorgeous interiors were flooded with deep colours of the setting sun, and violet shadows flickered on the grooves and arches.

Will Shekhawati’s painted havelis get their due?

After the sight of so many unloved dilapidated Shekhawati havelis, the Poddar Haveli in Nawalgarh was a sight for the sore eyes. The owner’s pride in his heritage was nearly palpable and the mansion stood like a hallmark of the incredible regional heritage. Shekhawati is truly incredible and it is time, the gorgeous painted havelis and their Silk Route history are brought to attention. May they see some more love and pride in the likes of Nadine, Mr. Kantikumar Poddar (owner of Poddar Haveli), and others like them and the region gets a new lease of life.

There is a wide range of accommodation available for all budgets in Nawalgarh.

The best time to visit any Shekhawati town including Nawalgarh is in winter between November to mid-March.

What to see in Nawalgarh –

Many travel bloggers have chronicled their Shekhawati travel experiences beautifully and they have explored the region better. Their work has done more justice than my meager 4 posts on Painted Towns of Shekhawati and I am sharing some works of my favourite travel writers. I am sure you will enjoy them as much as I did.