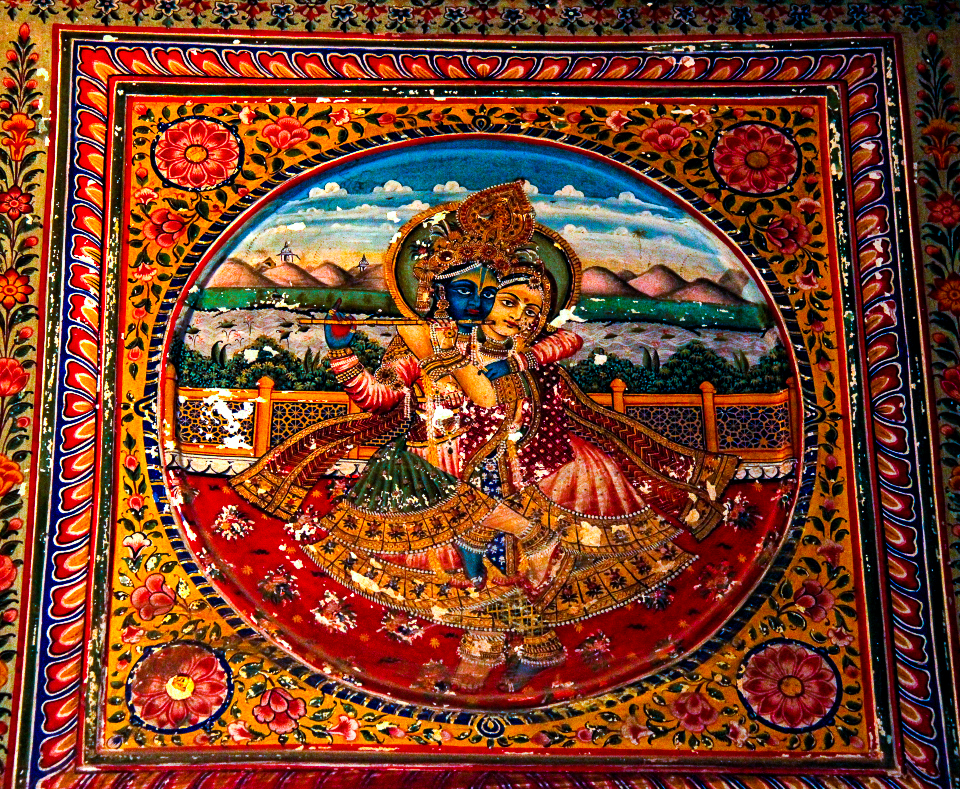 Walking around the painted havelis of Mandawa

The fame of the open-air museum of Shekhawati set me off to this extraordinary region of Rajasthan and this post on Mandawa is the second of 4 posts in the series on “The Painted Towns of Shekhawati”. My suggestion is that you read the introduction to Shekhawati to get an in-depth idea of the fantastic obscurity of this region. I reached Mandawa, one of the better known Shekhawati towns the one evening and stayed at the gorgeous Mandawa Heritage Hotel. It was a restored, old haveli and my room was decorated with mirrors. Aptly, called the Sheesh Mahal, it was a very romantic place to stay. Though romance did not figure on that trip, I got some very restful nights of sleep in the gloriously twinkling room in Mandawa.

A taste of Shekhawati opulence at a heritage hotel in Mandawa

Mandawa mornings were luxuriously slow-paced and I loved to languorously stretched myself awake. The hundreds of my own reflections looked at me from every corner and the morning light, streaming in through the ornamental lace-like ventilation jalis created slivers of diamond patterns on the walls. Usually a very restless person, I always found it hard to leave the bed on those Mandawa mornings and that was the closest I had ever come close to feeling like royalty. My getting up from the bed was always rewarded with late breakfasts and tea at the open courtyard, which had a flock of peacocks hopped about looking for crumbs, like puppies. Red bummed monkeys and silvery langurs watched me from a safe distance and it was always after my second cup of sweet, milky tea, that I pondered over my day’s schedule. Thus, my day was spent walking around Mandawa and it was more like a village than a small town in India.

Mandawa was very small in size and it took me approximately 2-3 hours to finish walking it twice. The experience was mesmerizing and disgust in equal measures and by late afternoon, I had enough time on my hands to visit the exquisite Sona Chandi ki Dukan (Gold-Silver Shop) at the nearby village of Mahansar. Thus my first Shekhawati day sped by in exploring two adjacent painted towns and I soon got overwhelmed by the region’s aridity. The dryness was not just unrestricted to the landscape and I found the people to be unfriendly and brazenly commercialized.

This dusty old trading town has a time-forgotten pace

Disrepair, abandoned, and unloved, can the Mandawa havelis be saved?

Though all my contacts with the locals were with either guide or hotel owners Shekhawati did not leave me with many pleasant memories. The region had dual characteristics of being strikingly beautiful and heartbreaking at the same time and the sheer disrepair of the architectural gems left me feeling depressed. The owners, in most cases, could not be blamed for the neglect of their heritage properties and in my eyes, the mansion’s caretakers ruined more than they protected. The declining wealth of the owners’ families, huge maintenance costs, and zero efforts from the government to protect the mansions made Shekhawati a fast dying heritage site and it was one of those “places to explore before they vanished”.

My walks around Mandawa immediately revealed the state of the Shekhawati heritage and the village lanes were lined with painted mansions in various stages of neglect. In a few buildings,  modern patched-up restoration efforts did a slapdash job and defaced most of the frescoes. The stepwells of Mandawa, which were once Shekhawati’s pride were plastered over with rows of drying cakes, and garbage lay strewn everywhere. Old gnarly tree roots and ornate cenotaphs were used for drying laundry and only the temples survived due to their religious importance. The famed open-air museum, called Shekhawati was one sorry state of affairs and the lanes of the Mandawa showed telltale signs of the rise and fall of wealth and pride.

Mandawa has a glorious past and is still a true mercantile town at heart.

With the fall of the Silk Route trade, Mandawa was abandoned

With the development of big cities like Calcutta and Mumbai diverting the trans-Thar trade south and eastwards, the importance of Shekhawati trading outposts declined rapidly and the painted mansions of the merchants were no longer been cared for. Abandoned by owners, who migrated to cities for greener pastures, most of Shekhawati havelis, including Mandawa, were completely derelict, and currently, the erstwhile trading route outposts resemble ghost towns. Mandawa, in spite of being one of the best maintained Shekhawati towns, showed gross neglect, and the small, remotely located feudal principality held many noteworthy painted mansions. The most famous ones were the Hanuman Prasad Goenka Haveli, the Goenka Double Haveli, the Murmuria Haveli, the Gulab Rai Ladia Haveli, etc and there was also the fort which occupied the center of the town.

Today it is a slice of quintessential rural India

Apart from these, Mandawa consisted of a small fanwork of tiny lanes which held gnarly banyan trees, tailoring shops, and tea stalls. It was quintessentially rural India where villagers had sipped tea and gossiped for hours. Donkey and camel carts made up most of the traffic and fearless hoopoes and other birds came too close. Occasionally a rattling bus or assembled jeep rumbled down the main square, spewing toxic black smoke on the onlookers’ faces and their comings and goings caused much excitement among the villagers.

Beauty once oozed from this beautiful Shekhawati town.

Despite all the drawbacks, the Shekhawati frescoes did not fail to bedazzle and they covered every inch of the mansions. Slightly exaggerated, and doll-like, with the innocence of a child’s painting, the gorgeous figures of finely dressed men and women watched me from everywhere. The houses were painted like storybooks with figures of the British soldiers, festivals, horse carriages, trains, canons, and Hindu deities. Then Shekhawati men were portrayed as grooming their luxuriant mustaches, while the women played coquettishly amid deities, floral, and arabesque designs. Thankfully most of the Mandawa had frescoes retained much of their original colour and beauty and they overpowered every failing aspect of the arid village. Ostentatious and grandeur seemed to be their keywords and the murals reflected the age-old quality of new money. The Shekhawati traders, having grown rich fast on opium, cotton and spices wanted to touch the sky and they loved to flaunt their lifestyle well.

Beauty can still be found in every corner of Mandawa.

Glimpses of the rich Shekhawati merchants

These merchants, perhaps, aspired to be royals, which by birth they could never be. Thus, they grasped it, by the sheer power of new money and lavished huge wealth in upgrading their lifestyles. The Mandawa frescoes, which were commissioned by them, displayed their cultural sensibilities, religious beliefs, royal aspirations, and blatant canoodling with the British power. Though the merchants were as rich as the Rajput rulers, strict social hierarchy forbade them to build palaces and forts as massive as the royals. So, they concentrated on the interiors and reveled in getting them decorated exquisitely with colours made from gold, silver, and other precious gems.

Today it is an obscure rural Indian small town.

From a hamlet to a fortified mercantile town, Mandawa had come a long way

Incidentally, the history of Mandawa belied the fresco town’s grandeur and it originated as a small hamlet. Founded by a Mandu Jat, Mandawa was earlier known as Mandu ki Dhani and he nurtured the hamlet by digging up a well there. Eventually, Mandawa’s importance grew with the burgeoning Silk Route trade, and caravans plying between China and the Middle East stopped there for rest, taxes, and protection. In 1755, when Thakur Nawal Singh, the Rajput ruler of Nawalgarh and Mandawa finally built a fort to protect the outpost, not only did he increase the town’s protection but also created the groundwork for a thriving community of merchants to settle inside the fortifications. Thus Mandawa morphed into a bustling merchant town that lavished time, money, and opulence on the sleepy hamlet.

Famous for painted mansions, Shekhawati is like an open-air museum

The cons of visiting Mandawa

I do not remember Mandawa’s mansions in detail and for me, it is a patchwork of sunny ochre lanes, camel carts, and beautiful frescoes. Much of its memories are quite unpleasant and uncovered sewage systems, huge dumps of half-burnt garbage, and public defecation in the open areas put me off. Its awkward position as neither a town nor a village, made the villagers not very tourist-friendly and at many places, the frescoes were either mutilated or covered with graffiti. It was a sad sight and the experience got worse, with the attitude of the villagers who harassed me for money. Even the children left playing to chase me and other tourists for pens, books, money, and teenage boys making lewd signs made the walk miserable. To be honest, I was quite relieved upon leaving Mandawa that afternoon and after a short drive through forgotten lanes of Rajasthan‘s interior Shekhawati, finally reached the next destination of Mahansar.

A train portrayed on a mansion in Mandawa

How to reach Mandawa

The nearest airport is in Jaipur, which is around 170 kilometers away. Jhunjhunu is the nearest railhead and has connections to Delhi, Bikaner, and Jaipur. Mandawa is well connected by road with many destinations in Rajasthan. The distance of Mandawa from Jaipur, Delhi, and Bikaner are 175, 266, and 188 kilometers respectively.

I would recommend Castle Mandawa and Desert Rose.

A romantic scene portrayed in Mandawa

The themes of Mandawa frescoes have changed over time. The older murals focused on mythological themes with occasional hunting and war scenes. The 19th century brought the craze of British (Raj) influenced grandeur and the traditional subjects got switched with cars, trains, gramophones, exquisitely attired haveli owners, British soldiers, etc. There are a number of painted havelis in Mandawa, with the most noteworthy being the Hanuman Prasad Goenka Haveli, Goenka Double Haveli, Murmuria Haveli, Mohan Lal Saraf Haveli, and the Jhunjhunwala Haveli.

Nearby Places around Mandawa

Blessed with the largest concentration

Of frescoes in the world,

Mandawa is still worth a visit.

The painted havelis are the real highlights of Mandawa.

Here are some glimpses of Shekhawati’s rich history.

Mandawa was once a dream and pride

Of the Shekhawati merchants

Who lavished wealth upon these mansions.

They truly aspired to be royal, something which the social hierarchy prevented them to be.

So, the Shekhawati merchants made use of their new money status and lived life the king-size.