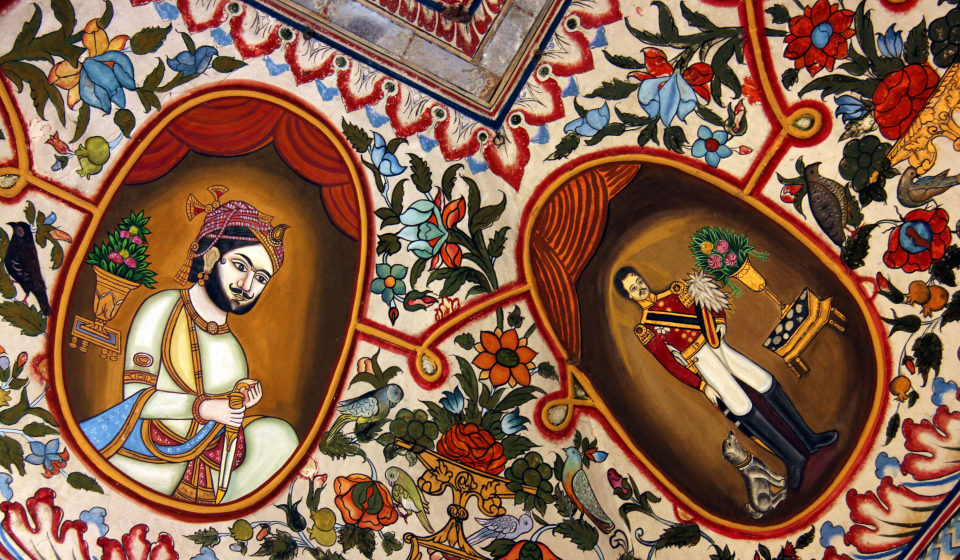 The Fatehpur painted mansions and a French artist’s love story

Once upon a time when the Silk Route trade was flourishing, the desert town of Fatehpur thrived. Its streets were busy with camel caravans bearing opium, silk, and spices, and merchants from different parts of the world thronged at its guesthouses. The town belonged to the Shekhawati towns in Rajasthan and it grew rich as a Silk Route trading outpost. The merchants filled their coffers with gold and silver and they spent a high roller lifestyle. They aspired to be royalty, hobnob with the British, yet their social status restricted them from certain privileges. So they did what their money allowed them to do and that was to build stunning mansions, decorate them with gilt frescoes that showed them in all finery. So the Shekhawati murals depict scenes of an expensive lifestyle like wearing fine clothes, drinking, playing chess, riding motor cars, and trains. Unfortunately with time, the Silk Route changed its course, and the establishment of big trading cities repleted the importance of Shekhawati towns. The merchants moved away to big cities and the mansions of the billionaires got abandoned. The prided murals faded away, columns crumbled and the impoverished caretakers let the grand mansion get destroyed. This is the general state of affairs in Shekhawati with the exception of certain cases in which new patrons gave a fresh breath of life to some buildings.

Thanks to the Shekhawati Project, Fatehpur is getting a revival.

The fate of the Devra Haveli in Fatehpur

This was the fate of the Devra Haveli in Fatehpur. Dating from the early 19th century, it was owned by the Devra family who was considered to be one of the wealthiest merchant families in Fatehpur. The family patriarch Mr. Devra was extremely fond of ladies and he was rumoured to have many concubines. He was also quite vain about his looks and one of the frescoes in the first courtyard depicts him donning his turban. Other frescoes showcase the life story of the owner and his family, the gods they worshipped, and important regional historical events like wars, celebrations, etc. All these details, however, were not very visible to the public since the mansion was in a bad condition before Nadine Le Prince fell in love with it. She visited Shekhawati by sheer chance and was left spellbound by a region full of abandoned grand mansions. The crumbling splendour, stunning paintings obscured by cobwebs and billboards, and palanquins covered by drying laundry took her breath away and she could not leave. Nadine acquired the Devra Haveli and soon started the mammoth task of restoring it. The haveli was renamed the Le Prince Haveli and it underwent a real renaissance under the expert eye of the master restorer, Cécile Charpentier.

A handsome and vain Shekhawati merchant

The haveli got closed for decades as the team painstakingly restored the abandoned mansion in Fatehpur.  The exterior which was very badly damaged by the sand winds and the sun needed a lot of work and the restoration of the interior needed colossal effort. Over the years, the smoke from the kitchens in the second courtyard blackened the walls with soot, and the rest of the frescos were either faded or buried under the dust. The loving effort and many back-and-forth trips to Europe finally saw the completion of the massive project. Today, it is a beautiful heritage boutique hotel, a cultural center, and the hub of the brilliant Shekhawati Project that focuses on the conservation and restoration of frescoes.

Exterior frescoes of a Fatehpur mansion

The sweet love story of Fatehpur

The story of Le Prince Haveli is a sweet hopeful one. It tells us how one person single-handedly can make a difference and when you have professional partners like Cécile Charpentier, then nothing can seem impossible. The restoration of Devra Haveli was difficult especially since it was the first initiative of the Shekhawati Project and there was no support from the government or the national heritage society. Even today, neither the Indian Government, nor the State of Rajasthan, nor the non-governmental agencies –UNESCO and INTACH – have shown much interest in the painted monuments of Shekhawati and the Le Prince Haveli is a true love story of a French artist.

How to Reach – Fatehpur is situated on NH 11, the Jaipur-Bikaner Highway. It is connected by the Jaipur – Sikar – Churu rail route. The driving distance from Delhi to Fatehpur which is around 300 kilometers takes seven hours. Shekhawati is a large region that is best explored by your own car or a rented car and a driver. That way, you can club the other towns of Ramgarh and Mahansar. If you are on a budget, then this route can also be done by local buses.

The Best Time to Visit – The winter months – November to mid-March – are the best times to visit Fatehpur in Shekhawati.

Where to Stay – Accommodation in Fatehpur is limited. However, there are a few luxury heritage hotels and some budget guesthouses. The best place to stay is the Le Prince Haveli.

What to See in Fatehpur

1- Dwarkadheesh Mandir (Temple):- Built by Seth Asharam Ji Poddar in the 19th Century, this mansion is richly decorated with frescoes.

2- Singhania Haveli (Mansion):- Built in a span of 3 years between 1857 to 1860, the Singhania Haveli is a landmark in Fatehpur. Built by Seth Jagan Nath Singhania this mansion is known for the artistic sculpture and fresco paintings of the British Raj.

3- Nadine Le Prince Cultural Center:- This is a restored heritage haveli now turned into a boutique hotel and a cultural center.

The subject of Krishna and Radha

Was a favourite among the Shekhawati painters

As well as the depiction

Of a swank lifestyle.

The people of the mansions

Their beliefs and habits

By the artists who

And people of the past

As you walk along

The streets of Fatehpur.

And you see the merchants’ aspirations

And dreams of reaching the social pinnacle.

Money could have bought everything,

Fatehpur would have remained prosperous

Unlike what it has become today.