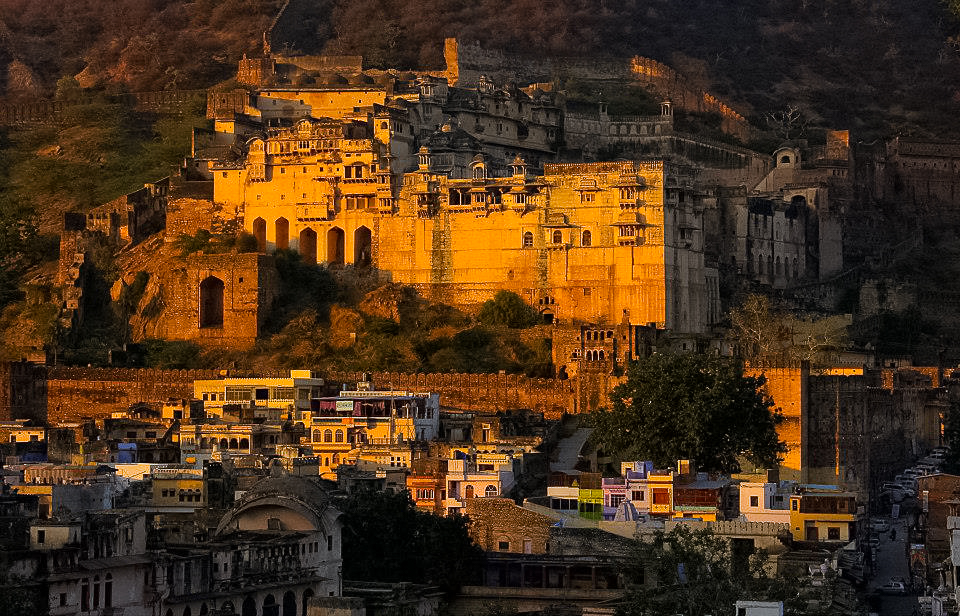 Taragarh Fort in Bundi: its secrets and legends

‘This is more the work of goblins than of men’, said Rudyard Kipling to himself. He was at Sukh Mahal in Bundi, penning down his famous book ‘Kim’ when a light glittering at a hilltop against the night sky caught his attention. He was talking about the Taragarh Fort and even though, Kipling being an author had a romantic turn of mind, his words were not exaggerated. Constructed atop a small hill in the year 1354 by Ajay Pal Chauhan, Taragarh Fort in Bundi is an impressive massive structure. Originally called Ajay Meru Durg, it was named Taragarh because when viewed from the valley below, the lights of the fort made it seem like a star against a black night sky.

A view of Taragarh fort in Bundi town

Taragarh Fort is built over tunnels

Ajay Pal Chauhan wanted it to be impregnable and to suit the needs of the people inside when under siege. Thus Taragarh Fort came into existence as a looming massive structure made from serpentine stone and with 4.5m (15ft thick) walls. It was further fortified with strong bastions and the hilltop location required an hour-long steep uphill walk. According to the legends, a network of tunnels lies underneath the Taragarh Fort and these crisscross the entire surrounding hillside. The tunnels lead into the town below thus forming numerous escape routes for a king and his entourage.

Reflection of the Taragarh Fort on the lake

There are also several bastions around the fort out of which Bhim Burj is the largest. It is used to house a massive canon which when fired produced a sound that was akin to thunder. Aptly named the Garbh Gunjan, meaning “Thunder from the Womb’, it was the second-largest cannon in India after Jaivan, the 8-meter long piece of artillery in Jaigarh fort in Jaipur. Another bastion called the Chauhan bastion contains some deep-water reservoirs that stored rainwater for the residents during times of crisis which a siege could go on for days and months.

View of Bundi town from the Taragarh Fort

The legend of a buried treasure

When Kipling mentioned Taragarh Fort to be the work of goblins, he hinted at the mysticism that surrounds this massive complex. Indeed, this fort comes up with a slew of legends and an extremely grisly history, making it one of the most poignant sites in Rajasthan. Taragarh Fort has been passed from the hands of the Marwari rulers into the hands of the Mughals. After the death of QutubuddinAibak, Chauhan and Rajput rulers attacked the fort in a combined effort. When the British came, they acquired the fort from the Rajputs. Apart from a dramatic history, the fort is riddled with legends. If local lores are to be believed Taragarh fort lies a huge treasure room that is stocked with the wealth of its long-dead rulers. This treasure was guarded by an Afghan family of warriors, and the kings had access to hoard through them. For centuries the Afghan family protected this stockpile of gold, diamonds, rubies, and gems, and not even the royalty know where it was located. As luck would have it, the secret of the treasure died with the last Pathan who was killed during the Second World War. When king Maharao Bahadur Singh returned from Burma after serving in the army against the Japanese, he launched an extensive search for the treasure. It was all in vain. After months of searching, the hunt was finally abandoned, and it is believed that the treasure still lies hidden somewhere within the fort walls.

The unkempt wilderness inside the fort

The three mighty gates of the fort

The entrance to the fort is marked by three gateways or Pols. The first gate is Lakshmi Pol (Gate of Wealth) and the second is called Phuta Darwaza (Broken gate) owing to its collapsed arch. The third gate is called Gagudi ki Phatak and today, it is also in ruins. There are a couple of palaces, temples, and other buildings inside Taragarh Fort. The complex also has a palace called the Rani Mahal that housed the wives and concubines of rulers. Today, it is in a sad state of disrepair and its spectacular wall murals and stained-glass windows have completely lost their shine and colour. There is also Miran Saheb ki Dargah, a shrine dedicated to a governor of the fort who died during a siege, in 1210.

One of the gateways of the fort

Old sites have souls, or so I believe and the old walls of the Taragarh Fort have certainly witnessed countless stories and secrets. If you think, that some places can emanate the pain and suffering that they have seen over centuries, then this fort can definitely do that. There is a certain feeling that you get when you are there: a feeling of hearing unspoken words, hushed whispers of the old stones. These stories are present in the air and can be heard by those who actually listen. Though not much of its original grandeur still remains, Taragarh Fort will not fail to either charm you or spook you. It is either of the two. Perhaps, it is because of how the old fort has been reclaimed by nature or the sense of mystique that it. It is a must visit for all adventure seekers and history lovers alike. Today, though sadly most of the majestic and fascinating architecture of the fort is now in ruins, Taragarh Fort is still extremely alluring during sunsets when the entire city is immersed in the fading light of the setting sun. The fort offers an excellent view of the entire town and is ideal for sunset photography.

The ideal time for tourists to visit the Taragarh Fort is from November to March when the weather is pleasant, and you can easily walk across the fort and explore it. Check out the things to remember before visiting this site.

The decaying interiors of the fort

The surrounding views from the Taragarh Fort