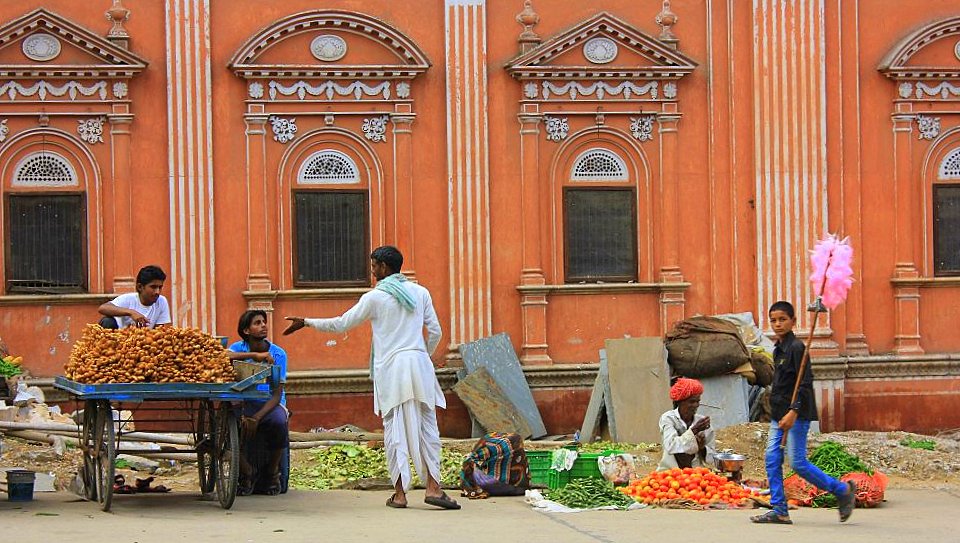 The romance of the Jaipur rain

With the rain clouding up the Cologne skies leaving the air smelling mildly acrid, my mind drifts off to another place in another time. The place is the gorgeous Jaipur in India and I remember its scanty rains which made the city‘s scrubby greenery look moist and green. Strangely I often found the rain clouds of Jaipur to brood more than they poured, but they never failed to drive the peacocks mad with desire. For many years, I have lived in the nice quiet neighbourhood of Tilaknagar in Jaipur and my house used to have a garden where peacocks roamed free. They probably flew in from the looming Moti Doongri and rain clouds always made them scream out lustily. Sometimes, sharp winds would accompany those rains and they would knock down boughs of golden shower flowers in summer, making the petals scattered on the pavement like flecks of gold. Clusters of deep magenta bougainvilleas which bedeck nearly every Jaipur residence worth its salt could also be seen among them and that would be the handiwork of the hordes of monkeys who call the Pink City home.

You may also like: Autumn day at Amer Fort

The golden glow of the Jal Mandir

The monkeys of the Pink City

Most visitors and residents of Jaipur get their first city survival lesson on monkeys. The Pink City has way too many of them and they can be found just about everywhere. The monkeys, I learned during my stay, came in two types. The aggressive and annoying red bottomed common monkeys, and the graceful silver langurs which are more peaceful than their cheeky brothers. These two do not get along with each other and I was not fond of either of them. One of the biggest tasks of the domestic help in my house in Jaipur was to chase the monkeys with fireworks every morning. As noisy as it sounds, their effect was far more somber than having armies of monkeys descend on the crenelated metal roof of the garage for hours. Their incessant footfalls sounded like drumbeats and they were loud enough to be heard from the next block.

The lovely hill temple of Galtaji

The holy cow affair of Jaipur

Jaipur, like most Indian cities, has a soft corner for animals and in the Pink City they love their cows. Being a Hindu populated city, the cow mania is quite understandable and many citizens earn their daily livelihood by selling fodder for these creatures. The sight of pious Hindu Jaipurites buying heaps of fresh “chara” (as the fodder is known in Jaipur) from pushcart vendors in the mornings is a very common one and the bovine lovers take this duty seriously. Another, funny and rather absurd memory is that of pious Hindu ladies feeding cows and calves with some freshly made dough or roti (Indian bread) every day. I have always watched this ritual from a distance and could never figure out how an unhealthy blob of dough in the poor cow‘s gut had anything to do with their piety. Charity often comes in many disguises and this remains till today, one of Jaipur‘s puzzling riddles for me. I wish there was a way in which I could stuff in all the beautiful snippets of my life there and this Jaipur photoblog is a dedication to the Pink City‘; its unforgettable movie-like moments, street scenes which make amazing stills, its gorgeousness, and humourous wacky side.

And it’s a pigeon pet peeve

The absurdity aside, I liked that Jaipur treated its animals kindly and the city often felt it like a sort of toned down zoo. In Jaipur, it is not unusual to see tired elephants waiting beside cars in a traffic jam, horses trotting along with bullock carts, street children boasting off their pet goats and pigeons swarming down in certain spots for their daily ”

The airy and grand Hawa Mahal

chara” or feed. Pigeons are another of Jaipur‘s most loved pet peeves and in many street junctures, street vendors selling Bengal grams is a very common sight. The big busted steel grey birds swoop in with fluttering of wings which is quite pleasant to the ears and I loved chasing them at the Albert Hall circle. They would fly off in a rush, leaving a faint avian smell on my face and it used to feel like going back into childhood. It is funny, how our best memories are often more to be felt than to be captured in photos, but then again how do you capture happiness which fills your heart in a camera. This Jaipur photo blog post could go on as a series if I tried penning down all the precious unforgettable moments spent in the Pink City and the loveliest one of them comes in the form of my daughter. Noni and I have spent an incredible amount of time in Jaipur and we loved exploring its niches.

You may also like: Most beautiful places in Rajasthan

The street potters and other stories of Jaipur

She is a very observant girl who captures even the tiniest of details and she loves how the Jaipur potters bake and sell their wares from makeshift tents on the streets. Nearly every locality in Jaipur has their own potter who peddles earthen pots, vessels and Diwali lamps. They spin their pottery wheel as traffic whizzes past them and bake them in the sun in the open. Piled up painted earthen pots are a very common street sight in Jaipur and they are as easy to spot as the modified jeeps, Jodhpur trousers, and really stylish mustaches. The last come attached on some very dashing men and the citizens of Jaipur are a good looking bunch. Their charm lies in their traditional outlook which has a very contemporary twist and this city loves its rituals. Whether it is Teej, Gangaur, Makar Sankranti, Diwali, or Govardhan Puja, intricate rituals are a part and parcel of a Jaipurite‘s life and they come with elaborate preparations, which are often very photogenic. I could go on and on with my Jaipur memories and with all my travel experience, can confidently vouch that the Rajasthani capital is one of the most beautiful cities in the world. In this Jaipur photo blog post, I will try to share all those images which till today remain deeply embedded in my memory and these are the ones which also happen to be drop dead gorgeous.

Gorgeous views of the Aravalli Range

This is Jaipur through my eyes

At the cost of being repetitive, I must say that Jaipur is truly a magnificent muse and in my eyes, the whole city resembles a big movie set. Saffron pink heritage buildings, gorgeous palaces, forts, bejewelled elephants, bedecked camels, colourful markets, henna, multi coloured veils, turbans, and swirling moustaches, Jaipur is what “exotic Indian” dreams are made of. Don’t get me wrong, because Jaipur has its share of annoyances too, and it is often for a reason that most foreign visitors complain about the Pink City‘s unsavouriness. The glittering gateway to Rajasthan has its hefty share of groping, hissing lecherous male who makes you want to punch their faces, publicly urinating civilians, sometimes poop piles of dubious origin, heaped up garbage, traffic-stopping bovines, noise, dust, flies and distasteful scams. But, it also has something which makes everybody look beyond these irks and remember Jaipur with a wistful nostalgic sigh. The city has a skyline to die for and it is riddled with some of India‘s finest architectural splendours. The Hawa Mahal, City Palace, Amer Fort, Sisodia Rani ka Bagh, Galtaji Temple are some of Jaipur‘s most famous spots and they are truly incredible sites.

You may also like: The smoking goat of Bhilwara

Jaipur royal past echoed in its winding lanes

The best parts of the Pink City, however, lies beyond these touristy spots and they can be found in the tiny lanes of Johri Bazaar, which has odd names like Chatori Rando ki Gali. Loosely translated it means, the lane of street walkers who love spicy food. As out of the world as it sounds, tiny lanes like this in Jaipur come complete with the photogenic hole in the wall shops selling gems, blue pottery, embroidered slippers, sweets, turbans, printed saris, and spices. There are quite a few in the Amer village too and when viewed against the backdrop of the fort with bejewelled elephants walking past them, the scene immediately transports you to the world long gone. This mesmerizes for a second or more until the harsh blaring of horns breaks your reverie and you return to the difficult, unforgettable Jaipur.

“Resplendent in the hues of its noble and magnificent past, the historic city of Jaipur stands out as one of the most spectacular and culturally vibrant destinations in the world.” – Kate Smith

Nature has blessed it

And its royal history

Has given the city an incredible heritage

Which is one of the

Jaipur has its annoyances,

The Pink City is an irresistible muse.

Check out Jaipur through other bloggers – Jaipur Thru my lens, Sandeepa Chetan, Erica Camille, The Spindrifters