Jaipur Blue Pottery: A turbulent tale of a no clay pottery

Distinguished by a vivid blue and turquoise colour palette, a Jaipur blue pottery item is a thing of sheer beauty. I have been in awe of them all through my years of residence in Jaipur and it was sheer lack of leisure time that prevented me from exploring the art better. Last year when I visited Jaipur in March, I had both time on my hands and a knack to know more about Jaipur Blue Pottery. I hired an autorickshaw (tuktuk) driver who doubled up as a guide and he took me to various handicrafts workshops throughout the city, one of which was the Jaipur Blue Pottery studio. It was an eye-opening experience and certainly made me learn more about this beautiful art than I had known before. The added advantage was the lack of inflated tourist rates of the pottery items at the studio and I came home with cases full of lovely vases. 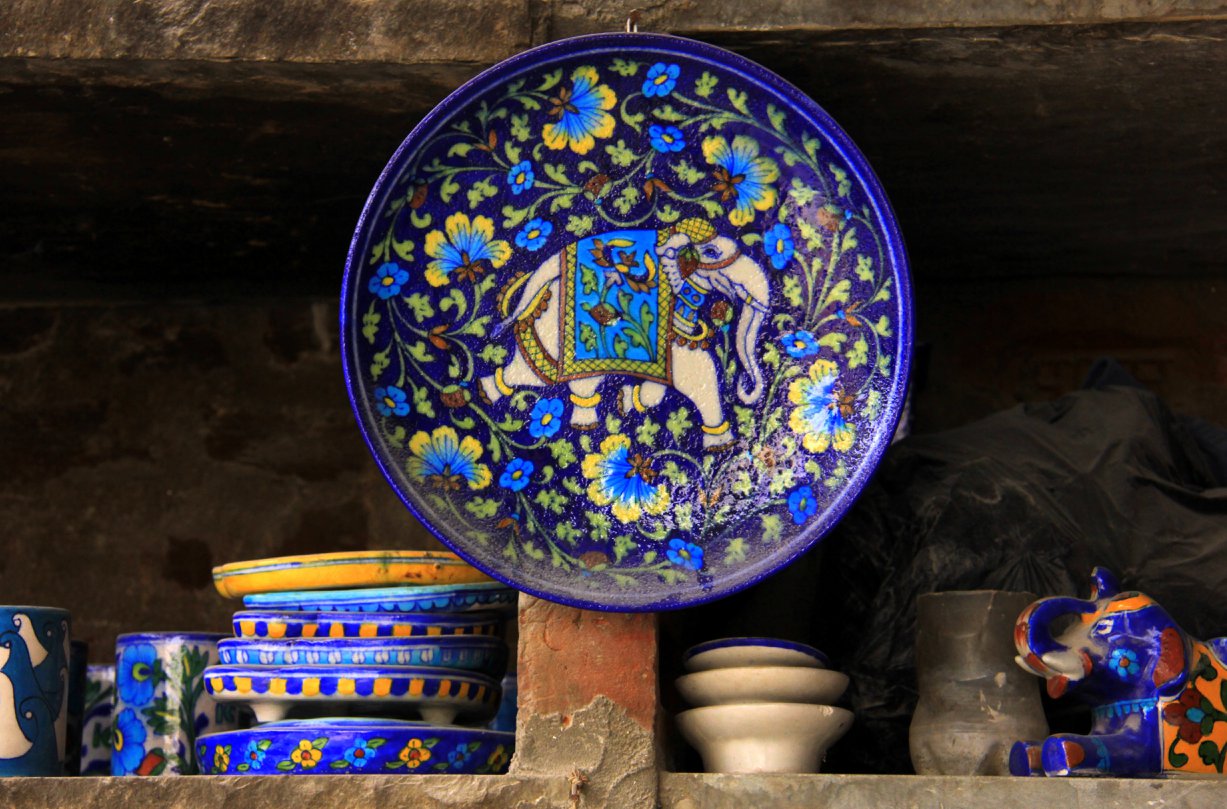 The signature cobalt of the Jaipur Blue Pottery

Jaipur Blue Pottery is a no clay item

The Blue Pottery is of Turko-Persian origin and it is a significant craft of Jaipur. Such is its importance that Jaipur Blue Pottery was given a GI status in India. A GI or Geographical Indication is the sign used on the products that have the regional origin and this can be depicted from its label. The most distinctive feature of Jaipur Blue Pottery is that it is a no clay product. Instead of clay, the dough for the pottery is made by mixing ground glass, quartz powder, Earths Fuller’s, borax, gum, soda bicarbonate, and water. The pottery items are highly glazed and low fired and the lack of high firing temperature makes them fragile. The Jaipur Blue Pottery products are mostly decorative items like ashtrays, tiles, beads, vases, plates, coasters, and small bowls and are one of the most sought after souvenirs of the Pink City.

You can read about my Jaipur Handicrafts Tour here 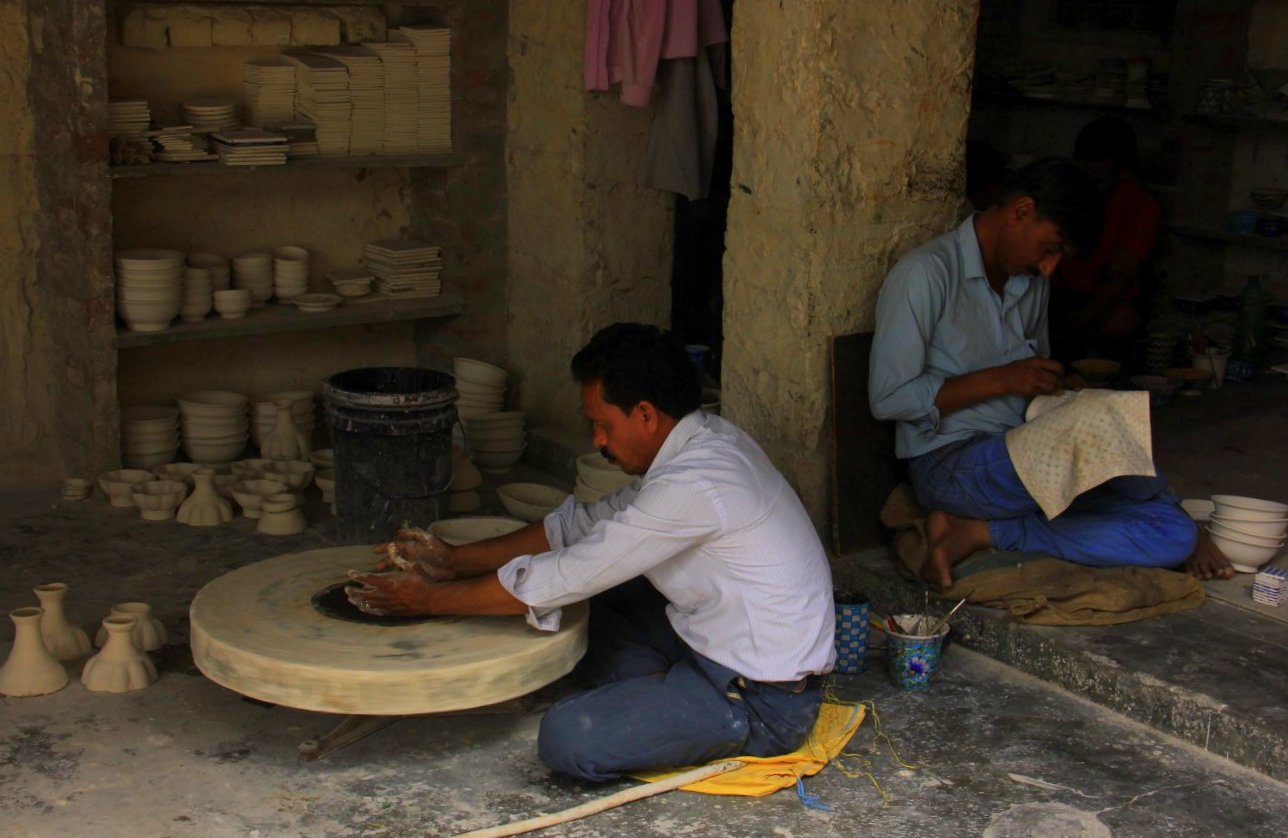 Jaipur Blue Pottery is not made of clay

The journey of Jaipur Blue Pottery to India

The history of blue pottery is as old as time and the technique of using blue glaze on pottery was first developed by the Mongol artisans. They combined Chinese glazing technology with Persian decorative motifs and the art came into India in the 14th century. Until its arrival in India, the blue pottery was used only for decorating palaces, mosques, and tombs in Central Asia. In India, their role changed from being architectural accessories to beautiful pottery items molded on a potter’s wheel and the Mughals are believed to have made them very popular. The trend of the blue pottery reached Jaipur in the 17th century and there is an interesting legend connected with the trail.

What is cultural appropriation and how can we protect our craftsmen?

This is a Persian influenced art

How Jaipur became its new hub

It is believed that once King/Sawai Ram Singh II attended a kite flying competition where he witnessed two brothers from Achnera bring down the royal kites of his kite masters. Intrigued, he wanted to know their secret and found out that the brothers were potters who had coated their strings with the same blue-green glass that they used for making their pots. Sawai Ram Singh II was impressed that he invited the potters to stay in Jaipur and spread their knowledge of this unique blue glazed pottery at his new school for arts and crafts. Many old specimens of Jaipur Blue Pottery can be seen in the form of tiles decorating fountains at the Rambagh Palace and till today historians are divided over why their popularity suddenly dipped.

Jaipur became the hub of glazed blue pottery in India

From the verge of extinction to a grand revival

Technically, the Jaipur Blue Pottery had enormous potential and its popularity with the royal family should have ensured the art to be flourishing. Instead, it was on the verge of extinction and the main reason were the master potters who refused to share their trade secrets with their fellow craftsmen. It had all but vanished until the 1950’s when the joint efforts of painter and muralist Kripa Singh Shekhawat and his patrons HRH Gayatri Devi, the Queen Mother of Jaipur and Kamladevi Chattopadhaya revived the art. Today it is once again a thriving industry which provides livelihoods to many artisans and is symbolically the face of Jaipur crafts. 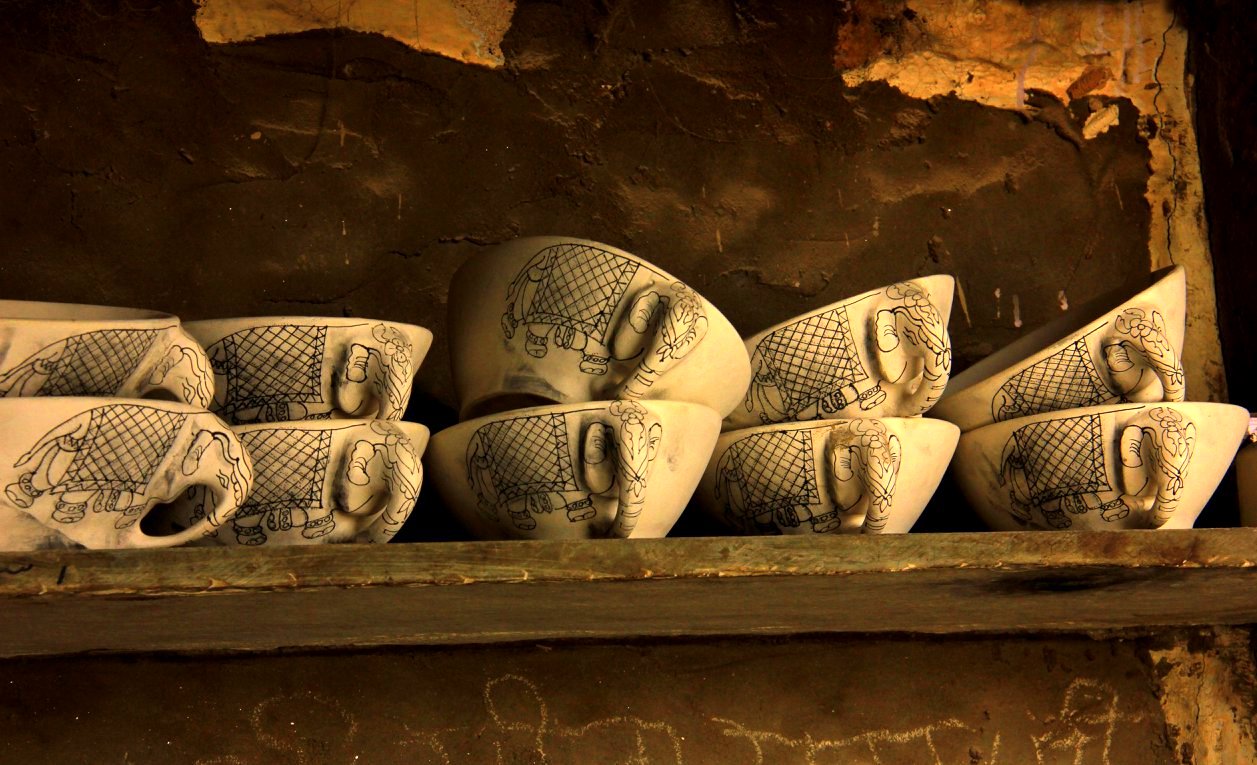 An art brought back from extinction

The process of making Jaipur blue pottery is both tedious and time-consuming. First, the dough is prepared by combining various minerals and gums and then it is flattened into a smooth pancake shape with a traditional wooden tool called thepai. The dough is then set in molds, their edges trimmed with knives and the insides filled with ash so that accidental deformation does not happen. Once the mold is set, the ash is removed and the surface of the items are polished manually with sandpaper. Now a white paste which is made by mixing flour, ground quartz and glass is coated on the item and it is left to dry. Finally, the design is outlined on the dried, coated item with a solution of cobalt oxide and gum and the painting is done with the delicate squirrel hair brushes. A final coating of glaze and baking in the coal or wood-fired kiln finished the product and the entire process takes approximately 15-20 days.

The colour palette of the Jaipur Blue Pottery is limited and its unique name comes from the striking cobalt blue liberally used in painting the items. The blue colour is derived from cobalt oxide, green from copper oxide and white, other non-conventional colors, such as yellow and brown are sometimes used. The traditional patterns and motifs of Jaipur Blue Pottery are of Persian origins and some of these pottery items are semi-transparent. Mostly decorated with flowers, birds, animals, and twines, nowadays contemporary geometric patterns along with human figures are fast becoming popular.

How to support the Jaipur Blue Pottery artisans

The allure of the Jaipur Blue Pottery is timeless. When combined with a backdrop of an exotic city like Jaipur, then the aura is heightened and one can only be grateful that the beautiful art has survived the passage of time. With so much of time-consuming labour that goes into the making of a single batch of items, it is sheer love for the craft and dedication that has kept this art alive. Today, like most crafts it needs patronage from the masses to thrive and what can be a better way to support this art than by buying a few Jaipur Blue Pottery items to bring back home. So next time you are in Jaipur, do stop by at a pottery studio or a handicrafts store and experience the beauty of this timeless art yourself. The best places to buy Jaipur Blue Pottery are – Neerja International and Jaipur Blue Pottery Art Centre. 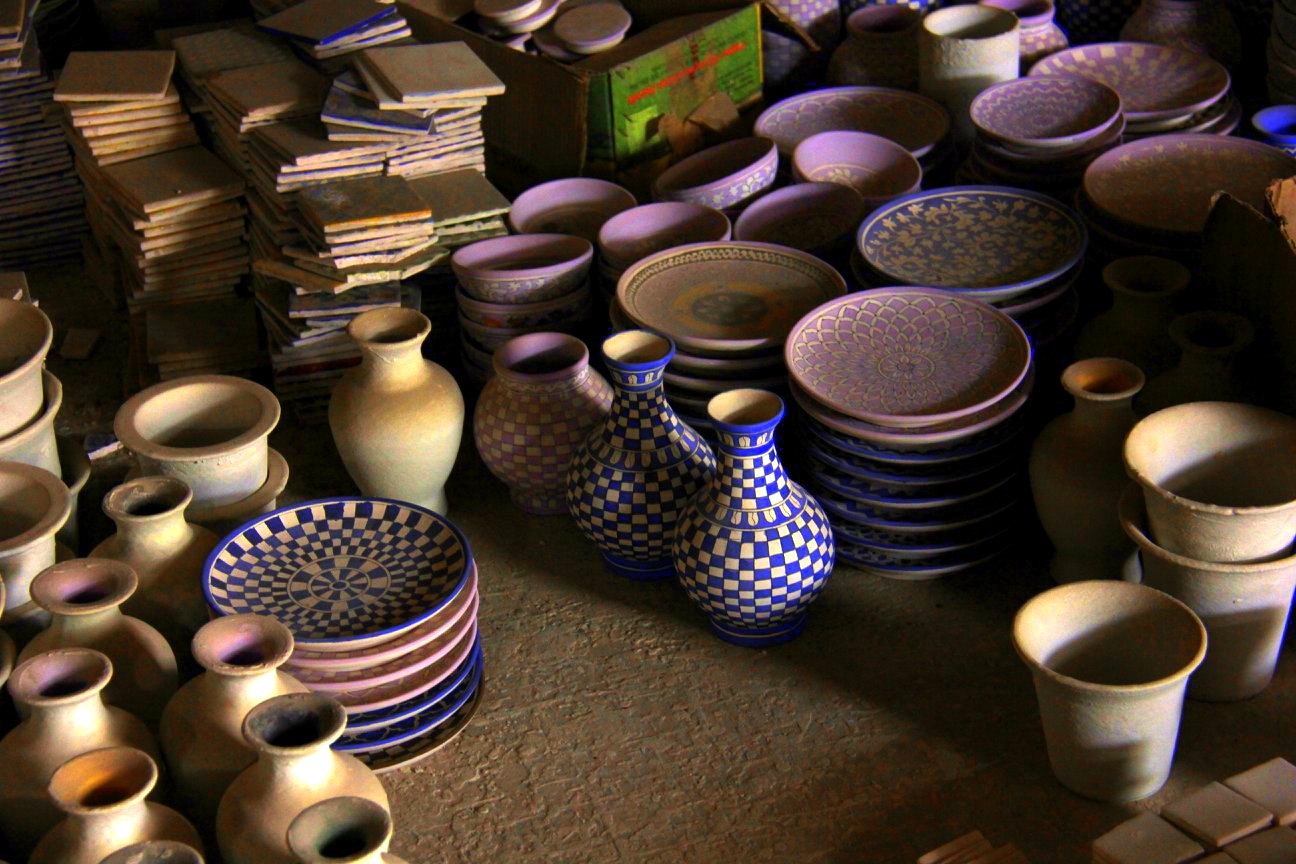 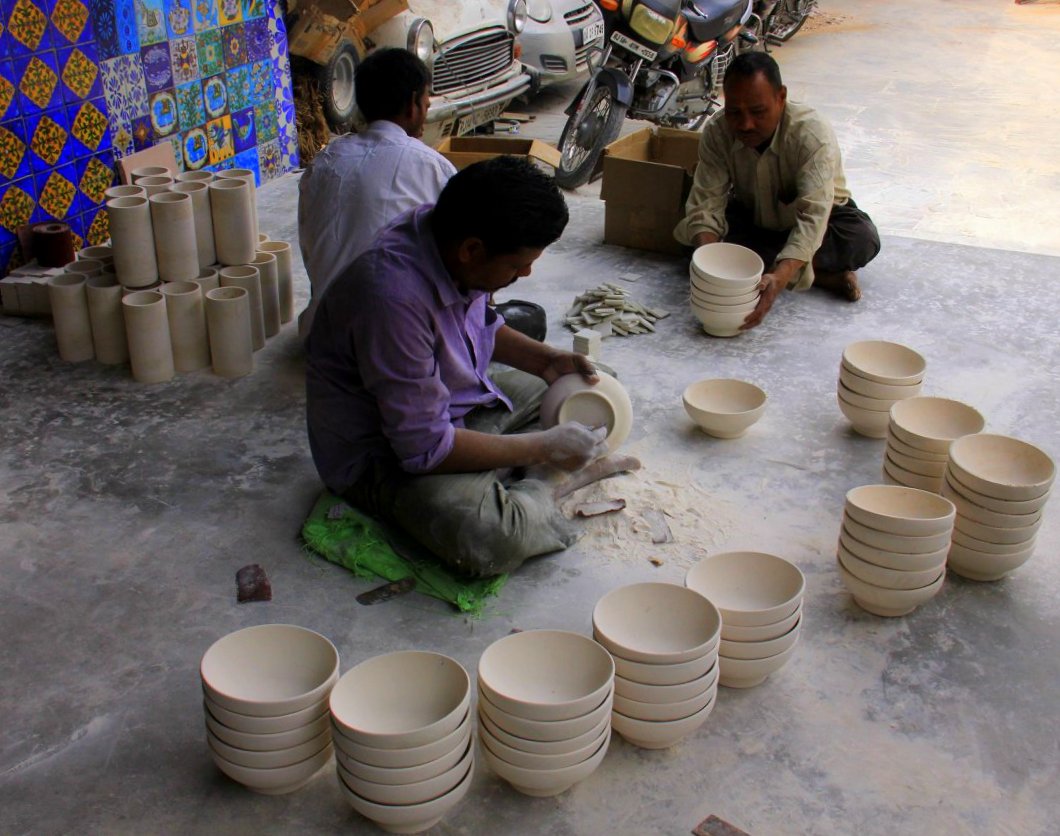 Of the Pink City of Jaipur. 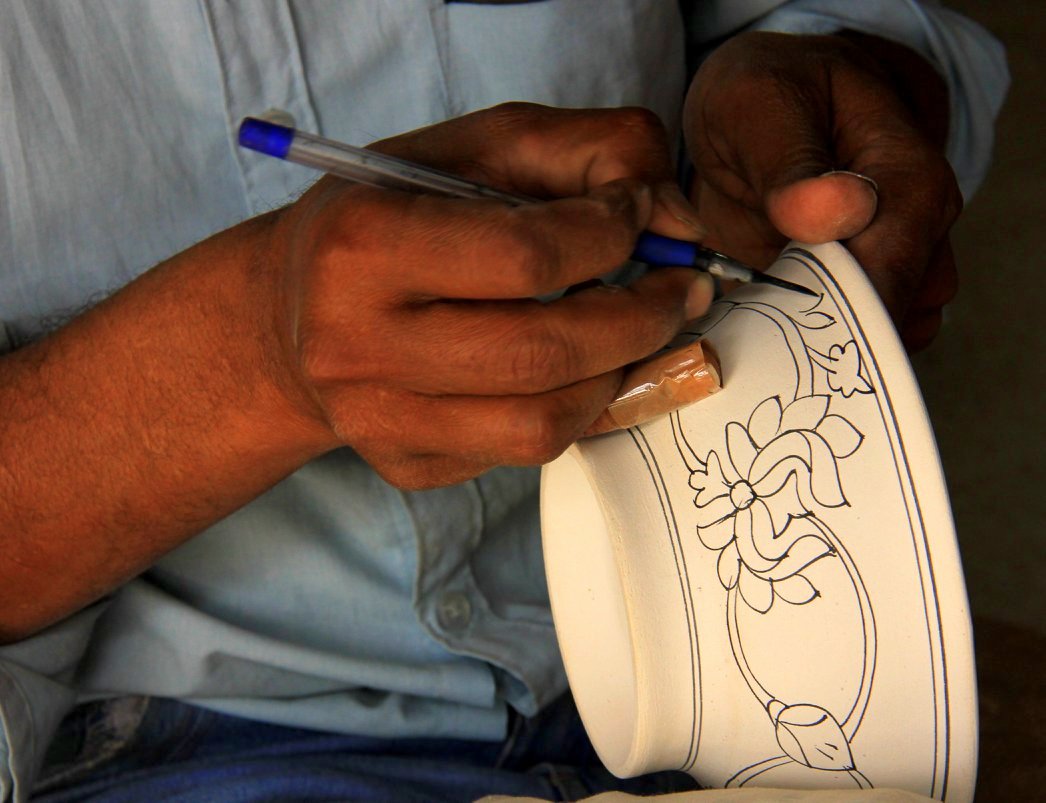 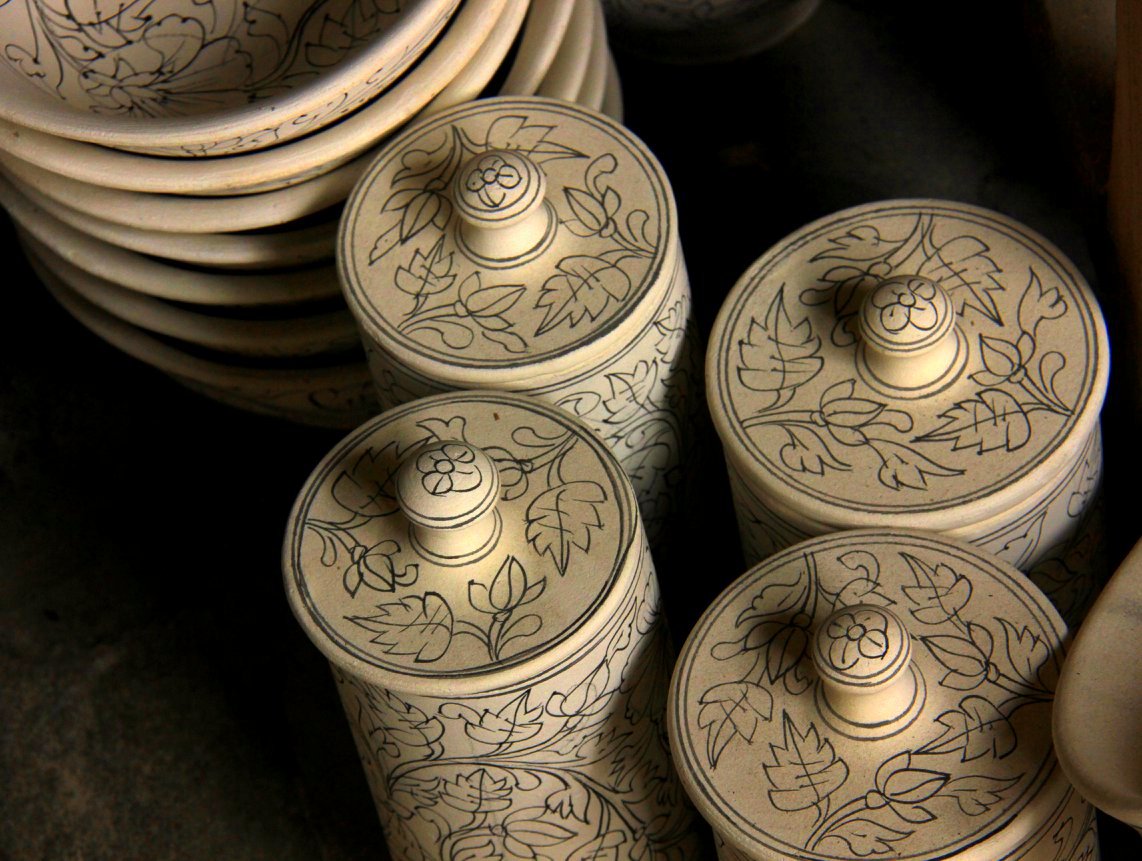 Jaipur Blue Pottery was brought back from near extinction. 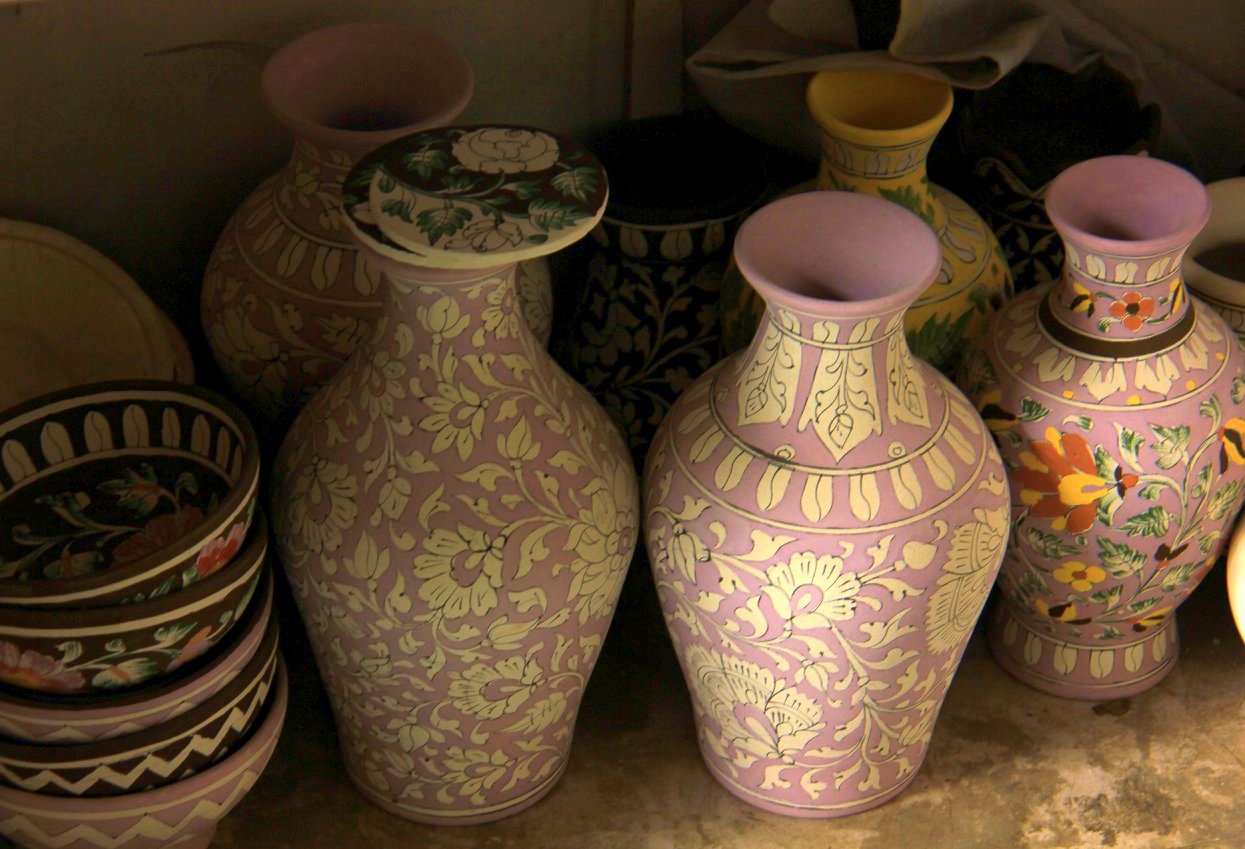 Today it is once again 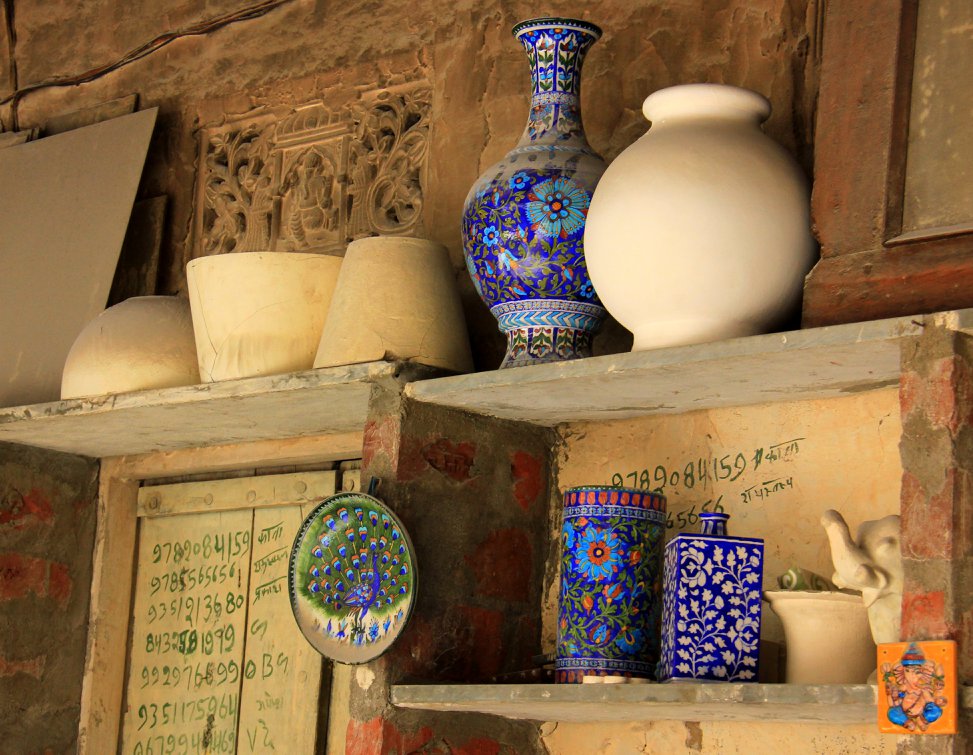 A popular handicraft which employs hundreds 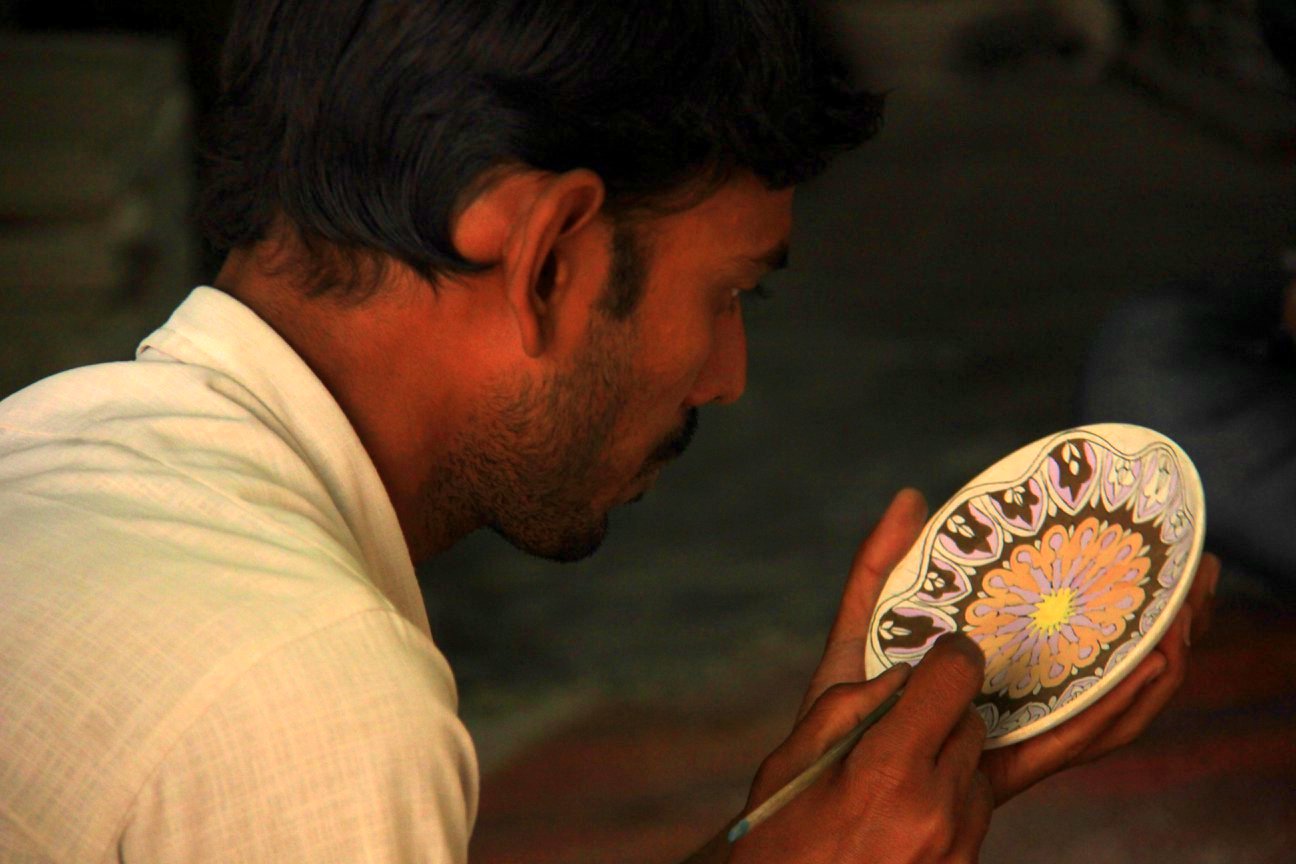 And has been given a GI tag in India. 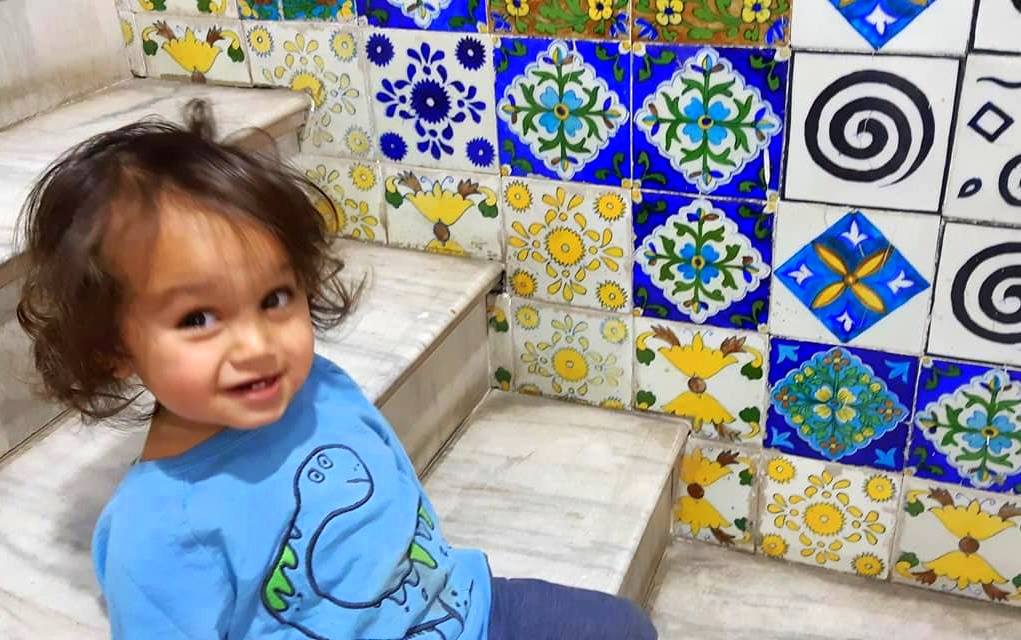 That doesn’t guarantee a safeguard against survival problems 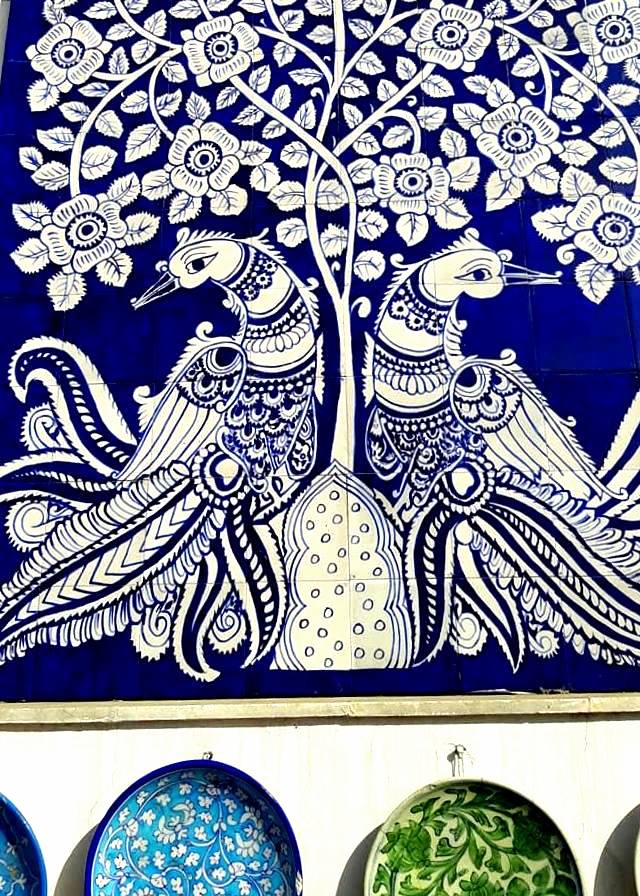 And next time you are in Jaipur, 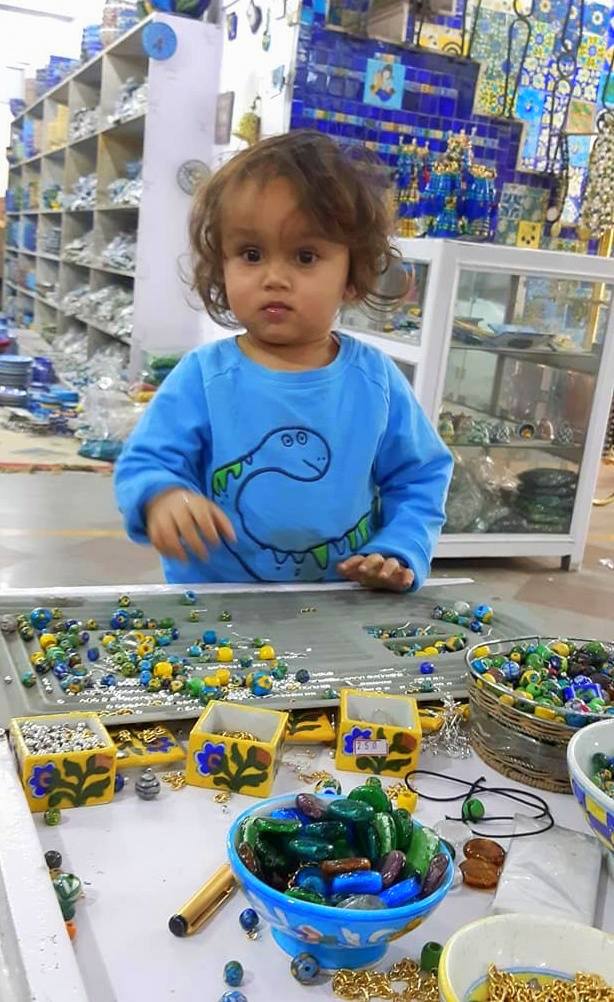 Buy some Jaipur Blue Pottery items for your home.