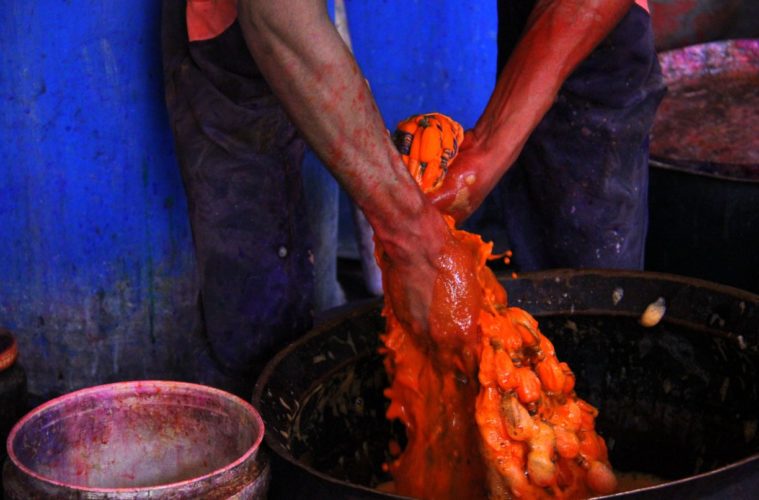 Exploring the artisan’s colonies and workshops on a Jaipur handicrafts tour was an eye-opening experience. It showed me the details and the labour-intensive production processes of the Indian ethnic handicrafts, especially textiles and I learned the hard way, why cultural appropriation is wrong. For a very long time, I kind of overlooked the hue and cry made over the use or abuse of some cultural aspects in fashion as being over-sensitive and deemed the attitude as much ado about nothing. I used to think that in a globalized village that our world has become, it does not make sense to hold on to some things as particularly your own. I could not have been farthest from the truth. The fact is that cultural appropriation is wrong and the working conditions of the artisans in Jaipur showed me why it is not okay for Gucci or D&G to use ethnic motifs or deigns without giving due credit to the original creators. Cultural appropriation is a huge topic and includes misuse of culturally sensitive symbols as well. In this post, I am only going to focus on what I experienced and that is the rampant stealing of intellectual property of traditional artists by big fashion houses and designers.

Sequin embellishment on a fabric

What is cultural appropriation?

The actual phrase “cultural appropriation” first appeared in 1945 when Oxford Living Dictionaries defined it as “the acknowledged or inappropriate adoption of the customs, practices, ideas, etc. of some people or society by members of another and typically more dominant people or society”. The term became more and more debatable after 1970 and came into the spotlight when in 1973 Marlon Brando refused the Academy Award for his movie, “The Godfather”. He sent the American Indian actress and activist Sacheen Littlefeather in his behalf to refuse the award and present to the world the first statement on cultural appropriation. He wanted to bring to notice Hollywood’s continued misinterpretation of the American Indian people and it is possibly the first stand taken by a celebrity against this issue.

Would you opt for a Jaipur handicrafts tour?

Cases of stealing or misusing a culture have been documented since the 19th century and marginalized groups have been protesting against this as cultural appropriation diminishes or sidelines the contribution of the people who created certain practices. My Jaipur handicrafts tour as mentioned before made me come face to face with cultural appropriation prevailing in the fashion world and it is high time that this intellectual theft needs to protested against more strongly.

You may also like: GLIMPSES OF CENTRAL VIETNAM COTTAGE INDUSTRIES

The hands that toil do not receive the benefits

Are we stealing something that does not belong to us?

Cultural appropriation is a serious matter and it is related to shared creative and artistic productivity. This includes art, literature, songs, films, fashion, and general representation of a given culture or group. It is a highly controversial topic in the fashion industry since studies have proved that some trends commercialize and cheapen the ancient heritage of indigenous or non-dominant cultures. The ambiguous part which allows cultural appropriation to happen rampantly is the debate whether designers and fashion houses understand or appreciate the history behind the clothing they are taking from different cultures. The most glaring are, however, the ethical issues of using these cultures’ shared intellectual property without consent, acknowledgment, or compensation. Many counter critics and fashion experts claim this concurrence to be “cultural appreciation” and that the use of the unique cultural symbols is an effort to pay homage to a specific culture.

You may also like: STREETS AND HANDICRAFTS OF JAIPUR: A PHOTO ESSAY FROM OUR GUIDED TOUR

A block-print studio in Jaipur

Intellectual property belongs to the artists and artisans

My Jaipur handicrafts tour, however, opened my eyes to the reality and I acknowledged for the first how the fashion industry is actually using the intellectual property of the artists without any acknowledgment or financial compensation. It is not okay, for traditional craftsmen and artists to strive in difficult working conditions to practice their art, which the big fashion houses capitalize by copying them without consent. Some of the most controversial cases of cultural appropriation are of Louis Vuitton using the Maasai square fabric in their 2012 Men’s Kanga collection and Zara using Ikat prints.

Block printing stamp maker on the streets of Jaipur.

A few years back on one of my trips, I met a very interesting lady named Anna Robertson. She is the founder of Yevu, an Australian-Ghanaian social fashion enterprise which focuses on cultural appreciation. Anna believes that creativity, especially in fashion, often stems from inspiration from other cultures and there is a solution to cultural appropriation. Her company’s motto is cultural exchange which involves consultation, collaboration, and recognition so that it does not resemble stealing or just one person setting the terms. So while Anna is based in Sydney, she employs over 20 people in Ghana who are paid according to the Australian standards and form a team which takes pride and ownership in what they are making.

Closer to home, a young designer, Anupriya Mridha whom I follow ardently on Facebook is doing the same and her prime focus is to give back to the artists their due credit. Her label, VANI VRTTI is “a home art studio which aims to generate a valuable livelihood for the true artisans and weavers community of India and make them feel proud and confident about there art, craft, traditions, and their profession. It is effortlessly trying to ensure that Indian art and craft does not die with time and is being transferred from generation to generation. It markets the most beautiful and quality handmade products to the end-users and gives them a space to think, understand, value, adopt and retain the art, culture, and traditions of India by supporting life, a family, a village and a livelihood. In Sanskrit ‘Vani Vrtti‘ literally means ‘Weaving Sustainable Livelihoods‘.”

“You can’t just come from the angle of ‘I think that looks cool, so I’m just going to do it.”

In a modern, globalized world, it is only natural that individuals, artists, designers, and entire industries would be influenced by cultures different from their own. And this is exactly why identifying appropriation is getting more and more complex every day. There is much more to cultural appropriation than wearing bindis to a music festival or making culturally sensitive faux pas by parading white models in turbans on the runway. It as much about profit, structural inequality, acknowledgment, and respect. Appreciating and borrowing from other cultures can be a positive, enriching and unifying experience if it’s done in a sensitive, mindful and equitable way. I can go on and on about cultural appropriation and misuse of intellectual property by big designers and fashion houses. However, let this photo essay from my Jaipur handicrafts tour present my point and you can decide if it is okay for the movers and shakers of the fashion industry to steal designs and profit from the artists’ creations without giving due credit or appropriate financial compensation.

Support cultural exchange not cultural appropriation during your travel

How to avoid cultural appropriation during your travels

My Jaipur handicrafts tour was an eye-opening experience. Here I will mention a few tips on how you can be a responsible traveler and avoid cultural appropriation by supporting the local culture or artists. This guideline is not pertaining to making culturally sensitive faux passes. On our travels, we purchase souvenirs and local handicrafts and a bit of mindfulness can go a long way in a happier, healthier cultural exchange.