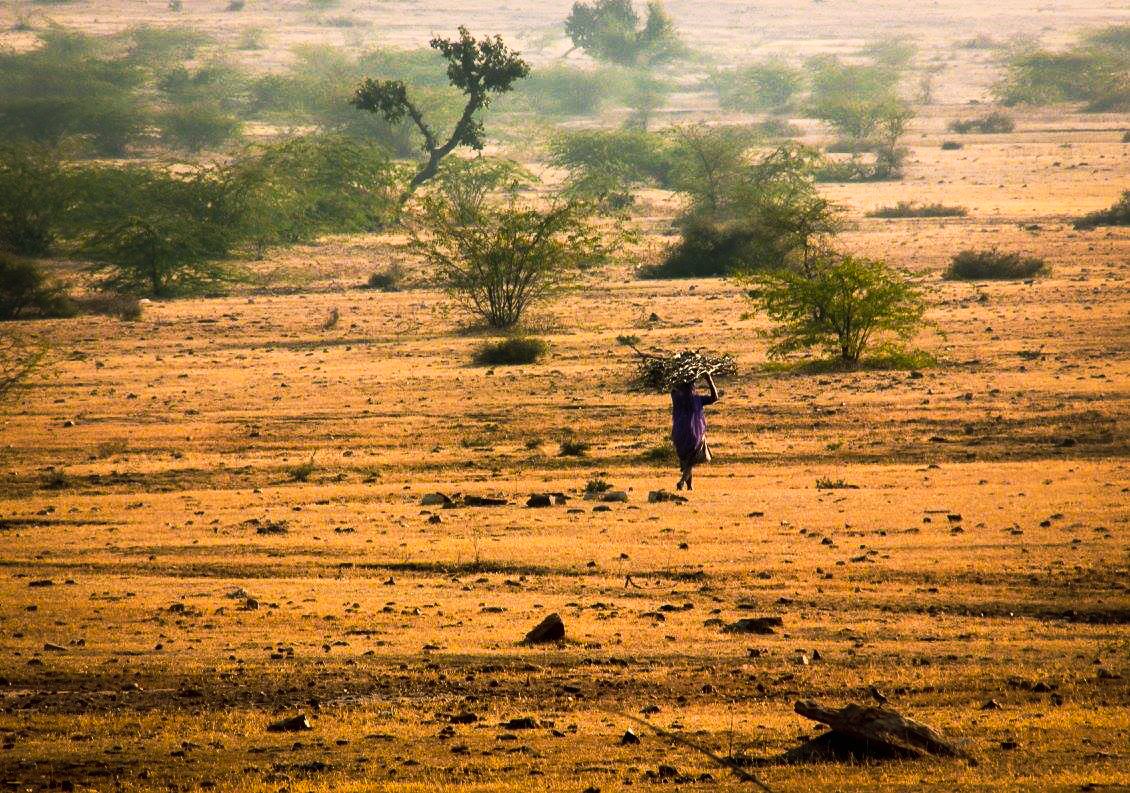 The wild beauty of rural Bhilwara

Let me start by introducing the Bhilwara district of Rajasthan to you. Imagine softly rounded scrub-covered hills cradling a shallow bowl like valley where green thorny vegetation conceals tigers, leopards and coiled pythons. Slender acacia trees leave deep purple shadows on the scanty underbrush and turbaned shepherds lead his trail of skipping goats over forgotten half-ruined temples. Neon green parrots flock to those forests fearlessly and they are disturbed only by the bejewelled village women in multi-coloured veils walking miles to collect firewood.

The wild beauty of Bhilwara

Such is the pristine beauty of rural Bhilwara district, one of Rajasthan‘s lesser-known jewels. Being surrounded by famous neighbours like Ajmer, Bundi and Chittorgarh districts from three sides, makes Bhilwara to be often overlooked by mass tourism and its beautiful hinterland is delightfully less explored. Authentic Rajasthani hamlets abound the district and the villagers offer warm hospitality in return for nothing, except curious conversations over tea. Life moves at a relaxed pace through rural Bhilwara and the best way to experience it is by road. A drive through this district is a soul-soothing affair, in which the greatest adventure is to just move on and soak it all in. Expect nothing, explore deep and go down the roads less taken. Rural Bhilwara will start to reveal beauty gently and except for the sight of helmet topped turbans and whizzing dhotis on motorbikes, this landscape seems straight out of Wild, Wild West movie.

It is also a mostly desolate land and this is the most striking feature of rural Bhilwara. One can drive along a highway through the heart of the district and not see any other soul for quite some time. Solitude seems to be the joie de vivre here and even the occasional firewood collecting village women walk in silent trails. Silhouetted against the golden brown countryside, their bright clothes make them stand out like flashes of colour and the long bundles of kindling wood on their heads throw shadows in sharp straight lines. In closer proximity, these women stun with their exquisite jewellery especially when the dazzling elaborate nose rings dance with each slightest movement. They are the Bhil ladies, a tribal group that is believed to have been named the district of Bhilwara. Although not many of them still live in that region, the Bhils and the Bhilwara district remain deeply enmeshed throughout history.

The legends of the Bhils

The Bhils are one of the largest tribal groups in India and they make up for 39% of Rajasthan‘s population. Also known as the Bowmen of Rajasthan, the Bhils are traditionally exceptionally talented archers and in the past used to work as hired mercenaries and hunters. They were often employed by the princes of Mewar for guarding their supplies, families or as fighters. During the colonial times, their services have been hired by the Rajputs and till today, the Mewar Bhil Corps is an acclaimed special division of Rajasthan police. The Bhils also have a very celebrated heritage that goes way back to the Indian mythological era. They have often been mentioned in the epics Ramayana and Mahabharata and many legends are associated with them. One tells the Mahabharata tale of Eklavya, a Bhil who surpassed Arjuna in archery and in Ramayana, Bhil women supposedly offered ‘ber‘ to Lord Rama when he was searching for Sita in the Dhandaka jungles. The great sage Valmiki, who authored the Ramayana was said to have been a Bhil dacoit himself before he was reformed with the blessings from Saraswati, the goddess of learning. Incidentally, the Bhil Ramayana is one of the most important tribal versions of the great Hindu epic.

Bhilwara is the original Kipling country

Bhilwara‘s literary mentions continue beyond the Hindu epics and in a more recent era, another celebrated book was associated with this Rajasthani district. Written by Rudyard Kipling, the setting of the “Jungle Book” was supposed to have been inspired by the wilderness of this region, until the researchers gave the credit to a place in Madhya Pradesh. However, in many places throughout the book, Bhilwara‘s wilderness along with Udaipur and Chittorgarh has been mentioned. Collectively called Rajputana, it has been the setting in which the black panther Bagheera trekked from Udaipur to the forests of Seeoni, in Madhya Pradesh, through wild rural Bhilwara. Kipling was in love with Rajputana, a place he knew like the back of his hand and had written his another book, “Kim” in the neighbouring district of Bundi.

In fact, the old Rajputana states of Bhilwara and Bundi are very similar in their geography and both the districts merge into each other seamlessly. It is not easy to tell where one ends and the other starts and this is also one of the best routes for exploring rural Bhilwara. The roads are good in most places with intermittent rough patches and the whole region is an unbroken space of a dry scrubby landscape. Gold and brown are the predominant colours of this area and this monotony is broken by still lakes, reflecting low hillocks and swooping kingfishers. Nature flourishes freely in rural Bhilwara and it is wild, uninhibited and beautiful.

The beauty of changing seasons

The changing of seasons can be keenly felt here and each paints the landscape in their own individual style. Summers are cruel months when intense heat scorches the earth and dust storms dance with the fiery winds. Ruins of ancient temples which are scattered throughout the rural Bhilwara district stand out like bleached bones in the shimmering heat and at mid-day shepherds seek shelter within the old crumbling walls. Monsoon brings relief by adding moist greenery to everything in and dry river beds, waterfalls, springs and streams come alive with flowing water. Beautiful waterfalls like the Menal gush down rugged ridges, which house chains of caves filled with prehistoric paintings and birds sing riotously in joy. Flowers burst out in wild abundance and mating calls of animals fill the air. Autumn dons a sombre hue in rural Bhilwara and wood smoke and jasmine scent the evening air. The short, but intense winters make the village mustard fields bloom forth with dense golden blossoms and bonfires roar at village squares.

Experience the soul of India

Experiencing such placidity of rural Bhilwara is like delving deep into the pure soul of India. Gorgeous, rough at the edges and blissfully relaxing, it is a place where there is the warmth of the rustic hospitality and travel pleasure lies in exploring the rich wilderness, which still remains delightfully untouched.

This post first appeared in Rail Bandhu in October 2017.