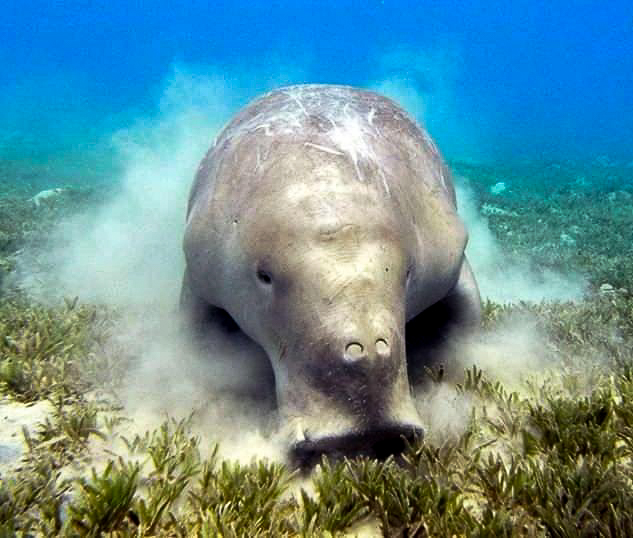 The marine world along the Marsa Alam coast is a real treasure trove for the diver. Here you can see the spinner dolphins, bottlenose dolphins, green turtles, hawksbill turtles, several species of shark, and the endangered Dugong (sea cow). Plus there are myriad varieties of vibrantly coloured corals and fish. Marsa Alam diving offers these and more. Think endless empty beaches, warm, clear water, and remote offshore islands. The best conditions for Marsa Alam diving occur during the summer months. Winter months from January to March have strong winds and rough seas. In the previous post, I have mentioned a detailed Marsa Alam travel guide and here I will give a brief travel description. Located on the western shore of the Red Sea, Marsa Alam is a nondescript town in south-eastern Egypt. Though still much quieter and emptier than Hurghada and Sharm-el-Sheikh, Marsa Alam’s popularity as a tourist destination has increased with the opening of a brand new international airport in 2003. The best way to reach Marsa Alam is by direct flights. Alternatively, look for cheap flights for Hurghada (which is 3 hours from Marsa Alam) or Cairo (then fly domestic from there).

What to expect during your Marsa Alam diving?

What kind of diving can you expect?

There are tons of amazing shore diving in Marsa Alam, along with some sites that are reachable either by a safari or a dive boat. The waters are usually calm with great visibility. One may find stronger currents in some dive sites away from land – but your divemaster or dive center will guide you about those during the briefings.

Who I did my Marsa Alam diving with

My divemaster, me, and a feeding turtle

Marsa Alam diving season goes throughout the year, although the late summer and early autumn mark the best sea temperature. August is the peak diving season though September is quieter and nicer. Winters can be a bit chilly and most divemasters suggest you pack a 3 mm or 5 mm wetsuit if you wish to go diving during this time. Also, always carry a dive knife, torch, and DSMB. The water visibility is up to 100 feet (30 m).

Diving depth – up to 25 meters.
Location – close to shore – wade in from the beach, 30km north of Marsa Alam.
Visibility – 5-20 meters. Best in the deeper area.
Suitable – for all diving levels and snorkeling

This is one of the best places to see large sea turtles, guitar sharks, and Abu Dabbab’s semi-permanent dugongs or the sea cows. A Dugong is a large herbivorous marine mammal, brownish or dark grey in colour, with no dorsal fin or hind limbs but with paddle-like forelimbs and a dolphin-like tail. Dugongs love the shallow sheltered waters of Abu Dabbab because of the abundance of seagrass.

Sataya Reef promises great chances of swimming close to dolphins. Excursions to Sataya Reef are available every day except for Saturdays and Sundays. These include transfers, boats, permits, a professional guide, snorkeling gear, necessary permits, and meals. It is the place to free-dive with the wild dolphins. Note that this is not a dive excursion but more of a snorkel one and needs a whole day from Abu Dabbab Beach for this trip.

This reef lies in the open ocean. It is a little over seven miles (12 km) from the Marsa Abu Dabbab coastline and takes around 20 minutes to get there via Zodiac from Marsa Alam, weather permitting. From Port Ghalib, it takes two hours via motorized boat. The top of the Elphinstone reef plateau, some 300 meters long and 30 meters wide, is between one and 40 meters deep with near-vertical cliff walls at its edges. It’s one of the world’s best sites where divers can regularly see different types of sharks, especially the oceanic whitetip, reef sharks, and hammerheads. Elphinstone reef also attracts many other varieties of sea life including jacks, tuna, blue lunar fusiliers, black snapper, and giant barracuda. Only experienced divers should visit the Elphinstone Reef. The open-ocean site is famous for strong and ever-changing currents, deep caves, and coral plateaus. You can see sharks year-round, but they are most numerous from October to December.

This reef is one of the most popular as one of the world’s most important dolphin habitats. A large family of around sixty spinner dolphins has made it their permanent home. Due to a growing boom of tourism at the Dolphin House, there has been a recent decline in the resident dolphin population. Thus the access to the reef has been restricted to protect the dolphins. Buoys have been placed in water to mark separate zones, with an area for dolphins only, another for divers only, another for snorkellers only, and another for mooring boats. Visiting times are limited to between 10 am and 2 pm and the number of ticket permits sold restricted to 100 snorkellers and 100 divers daily. The spinner dolphins are nocturnal animals and they return every morning to the shallow waters of the reef to rest. The reef is crescent-shaped with a small lagoon of sand and sea-grass within. It is rich in marine life and also houses the usually elusive sea horses. Divers can also explore some underwater caves and at least twelve coral towers. You should only explore the caves with an experienced guide.

The cargo ship, the Hamada, sank here in 1993 and it lies on its starboard side in two sections. The wreck has attracted many types of coral and marine life including Napoleons, Lionfish, Surgeonfish, Butterflyfish, and Moray eel. The port side of the ship juts slightly above the waterline at low tide. Qualified divers can explore parts of the wreck including the pilothouse, engine room, and cargo hold. The wreck is also suitable for snorkelers, and novice divers. Abu Ghusun shipwreck is accessible all year.

A complex of reefs, Furry Shoals has a large coral formation with many hard corals, branching corals, soft coral, and also many young corals that are still growing. The depth of the reef varies from 10 meters to about 40 meters so all levels of divers can explore the reef. The site also has a few caves, pinnacles, drop-offs, drift areas, and even some wrecks amongst the whole system. The main dive areas within the system include Malahi, which means labyrinth in Arabic, Fury Shoal Gardens, a very well preserved stretch of coral garden, and Sha’ab Claudio with its myriad of swim-throughs.

These two rocky islands are accessible by boats and liveaboards only. They sit almost 44 miles (70 km) offshore from Al-Qusayr (also El Quseir), about an hour north of Marsa Alam. This area has been designated as a Marine Protectorate since 1983 and it is one of the world’s best dive sites. The islands’ sheer drop-offs offer spectacular wall diving with the opportunity to see abundant soft corals, gorgonian fans, and large pelagics, such as gray reef, silky, silvertip, and hammerhead sharks, tuna, jacks, and the occasional thresher shark. The Brothers Islands are suited for experienced divers only and the Egyptian port authorities require a minimum of 50 logged dives to get permission to dive there. One can experience strong currents and waves there and the exploration of the wrecks and reefs beyond 130 feet (40 m) is for experienced technical divers only. Most favourable sea conditions at the Brothers Islands are at the end of spring and fall.

This remote reef is yet another Marsa Alam diving site that is accessible by boat or liveaboard option only. It is 50 to 56 miles (80 to 90 km) from Marsa Alam and lies within a marine park. The reef is less than a mile wide and, due to its remote location, dive boats visit less frequently than other area dive sites. It offers pristine hard and soft corals and deep walls. Hammerhead sharks are frequent visitors. Daedalus Reef is suitable for experienced divers only due to its strong currents, waves, and surface swells that make the entry and exit conditions challenging. There is an abundance of marine life at the Daedalus. This site is accessible all year, though the end of spring and autumn are most favourable.

Yes, people ask is this question a lot. So as a foreign woman who lives here and has traveled alone throughout the country, I have to say that EGYPT IS PERFECTLY SAFE.

Until recent years, Marsa Alam diving was relatively unknown in the world of marine lovers. However, in recent years, Marsa Alam has grown in popularity and pristine reefs and lack of crowds make it a very alluring diving destination. Marsa Alam diving sites offer the opportunity to dive with dolphins, sea turtles, dugongs and manta rays from May through August. There are whale sharks, as well as a variety of other shark species, from May through June. While some of its dive sites are best left for experienced divers, many spots are perfect for learners and novice divers. For more information, check out this excellent post.