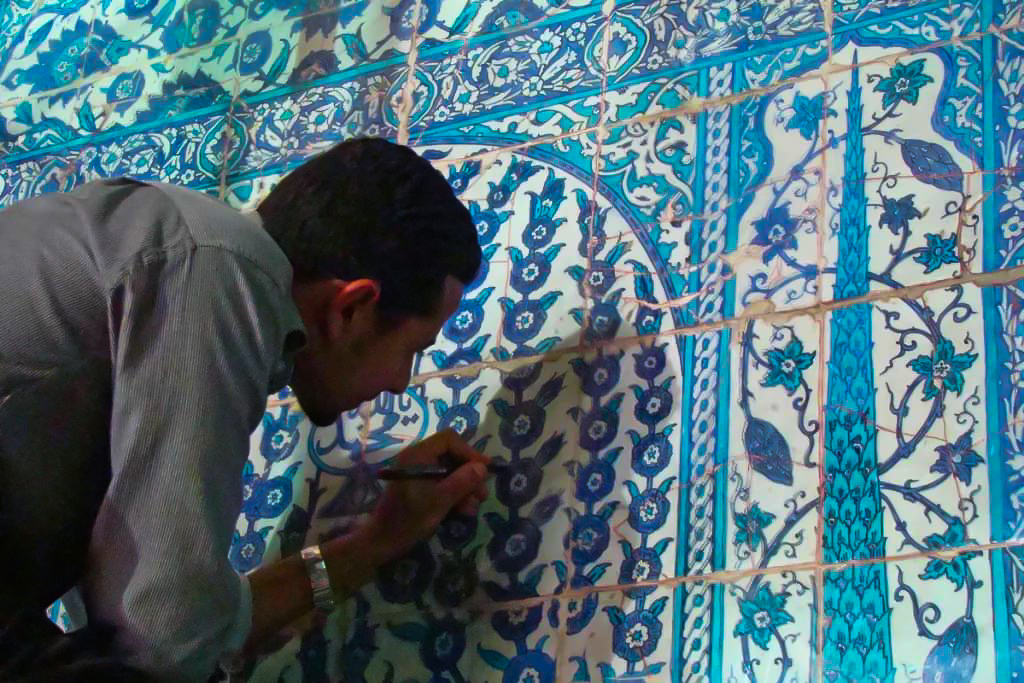 Mosque of Aqsunqur or The Blue Mosque in Cairo

The Mosque of Aqsunqur or the Blue Mosque is one of the prettiest and quietest places in Cairo. It lies nearby the Mosque-Mausoleum of Khayrbak and the Waqf of Ibrahim Agha Mustafizan in El Darbel Ahmar on the right side of Bab EL Wazir Street. This pretty monument got its name due to the abundance of blue tiles that decorate its interiors. These are types of Iznik and were added by Ibrahim Agha. The founder, however, was not him and the mosque of Aqsunqur was built by Emir Shams El-Din Aqsunqur, one of the most prominent noblemen in the Mamluk period. Keeping in pattern with many of the Mamluk noblemen’s fate, the Emir Shams El-Din Aqsunqur was condemned to death after his participation in a plot against Sultan El Kamil Shaban in 1347.

A gorgeous blue tile of the mosque of Aqsunqur

Some of the prettiest features of the mosque of Aqsunqur are its circular columns and simple, elegant interiors. The façade is inlaid with handsome blue-gray marble while the entrance is decorated with an arched recess with two finely carved brackets. Nowadays, many parts of that mosque are ruined, and the only remaining part is the wall of the Qibla. There is also a dome above the Mihrab and a fountain dating back to 1412/815. The Mihrab of the mosque is a fine example of early Mamluk religious architecture.

Interior of the mosque of Aqsunqur

The magnificent mosque of Aqsunqur houses a number of mausoleums some of which belong to Shams El-Din Aqsunqur, the mosque’s founder, his sons, and a number of children from a Mamluk sultan. There is also the mausoleum of Ibrahim Agha who first undertook the responsibility of extensive restoration work after the mosque fell into a state of disrepair. That was in 1652 during the Ottoman period. The renovation process that lasted from 1652 to 1654 saw the mosque’s roof and all the mosque’s arcades being completely restored, and a number of columns added to the interior. It is believed that the new patron Ibrahim Agha also ordered extensive redecoration of the mosque’s interiors. He added the charming blue and green tiles crafted in typical Iznik style, all of which were brought in from Constantinople and Damascus thus rendering the mosque its charming name of the “Blue Mosque”.

A tomb inside the complex

There is no entrance fee. However, one may tip the caretaker of the mosque if one wishes.

Dome of the mosque of Aqsunqur

Restoration work of the mosque of Aqsunqur
Photo Credit – https://www.wmf.org/

Restoration work of the dome of the mosque of Aqsunqur
Photo Credit – https://www.wmf.org/

Restoration work of the mosque of Aqsunqur
Photo Credit – https://www.wmf.org/