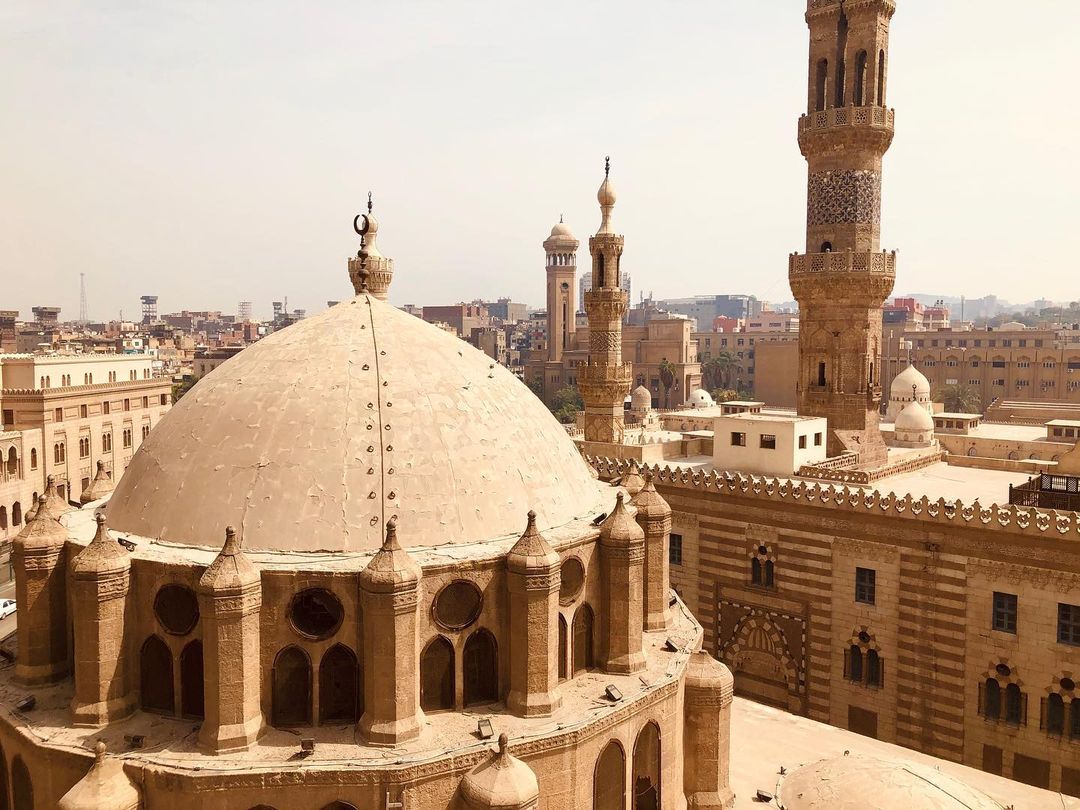 The Mosque of Abu Dahab, a hanging mosque in Cairo

I am married to an Abu Dahab. This name is very illustrious in Egypt and the family is supposedly a very old one. Riddled with rifts, family dramas, political game-changers, the Abu Dahab clan is as eccentric as most old families go. My older Egyptian colleagues and acquaintances often tell me stories of their fate at the hands of the fellaheen (peasants) during the time of the Peasant Revolution of 1919. Quite understandably, I know nothing of how deep the waters run or the prestige of the family, until I visited the Mosque of Abu Dahab in Cairo. It is located opposite the Khan el Khalili market and has been long overshadowed by its more famous neighbour, the Al-Azhar Mosque. The building that houses the mosque of Abu Dahab was closed for a long time for restoration and it has recently opened up as the brand new Naguib Mahfouz museum. Naguib Mahfouz is one of my favourite writers and I love to daydream about erstwhile Cairo through his powerful imagery. Thus it struck me as a tad ironic that his museum should be housed in this building; one that carries the name of the man I married.

Ottoman-Mamluk history of the mosque of Abu Dahab

Considered to be a hanging mosque since it was built above the street level, the mosque of Abu Dahab was commissioned in 1774 CE by Muhammad Bey Abu al-Dhahab. He was an Egyptian bey and a Mamluk of Ali Beck El-Kabir, who acted as the main ruler of Ottoman Egypt between 1772 to 1775. Muhammad Bey Abu al-Dhahab was appointed as the leader of the Egyptian army that went to conquer Syria. He was very successful in his campaign and he conquered many towns in Syria. However, Abu Dahab later turned greedy and revolted against his master in order to grab the reins himself. He died in 1775 in a battle against the Governor of Acre in Palestine and his body lies buried in the mausoleum. I read about this bloodthirsty history just before we visited the mosque of Abu Dahab and for the zillionth time wondered at the surrealism of the whole situation. I hail from humble backgrounds of mixed-race immigrant origins and my families have no claim to fame. Both my maternal and paternal clans were landowners and we do not have registered family trees or monuments built for our ancestors. The ‘man I married’ is the exact opposite of everything that constitutes me as a person and more than once I have wondered at our bizarre pairing.

The woodwork that marks off the mausoleum

Details of the mosque of Abu Dahab

Anyway, when you have an in-laws family name that makes people’s jaw drop and tongues wag, there’s not much to do but take it all with a sense of humour. Plus, a dedicated medieval monument adds to the aura and the mosque of Abu Dahab is certainly a very beautiful one. Considered to be the fourth mosque to be built in Cairo in a traditional Ottoman style, the mosque of Abu Dahab was part of a larger religious-charitable complex that included a madrasa, a library, a takiya (Sufi complex), fountains, latrines, a sabil (water dispensary), and a hod (water trough). Although only the main mosque structure remains today, its beauty is still remarkable. Architecturally, it resembles the Ottoman Mosque of Sinan Pasha in Bulaq in spatial configuration and dome size and profile. However, unlike the Mosque of Sinan Pasha, whose porticos look out onto gardens on the port of Bulaq, the mosque of Abu Dahab lies in the middle of a bustling city and is constructed on top of shops generating income for the upkeep of the building.

The inner chamber that is a mausoleum

A gorgeous dome and an intimate mausoleum

The most impressive feature of the mosque’s interior is its lovely huge dome. The mosque of Abu Dahab has trilobed squinches at its corners and is beautifully painted with Ottoman-style arabesques and motifs. Its circular drum has two tiers of windows that filter in natural light in the most atmospheric way. Each of the lower rows of windows consists of eight small round windows around a larger round window, while the upper ones have the quintessential Mamluk arrangement of two arched windows topped by a round one. The mihrab of the mosque is typical with inlaid mother-of-pearl and marble in the Mamluk-style decoration. The tomb of Muhammad Bey Abu al-Dhahab lies in the northeast corner of the mosque’s portico, under one of the smaller domes. His sister Zulaykha, also lies in eternal slumber there and the mausoleum is sheltered by a bronze grille and decorated with a patchwork of tiles from various regions like Iznik and Tunisia.

What lies outside the mosque of Abu Dahab

In India, we have a saying that can be translated as “lotus in the mud”. The mosque of Abu Dahab seems something like that. Picture this: Narrow, unpaved, congested alleys of Al-Gamaleya district in the heart of Old Cairo, the glamour of the timeworn, medieval buildings, and the chaos of daily bustle. Surrounded by holes in the wall grocery shops, butcher shops, and calligraphy studios the mosque of Abu Dahab stands aloof, looking a bit forlorn and very grand. In the modern grungy setting, the name of Abu Dahab seems out of place. The patron of the mosque was dubbed Abu El Dahab (The father of the Gold) for the generosity that often led him to distribute gold to the poor and needy. During my visit, one that left quite an impression on me, I had a strange quote constantly going inside my head and somehow it seemed perfectly apt to the building’s heritage. It was “How the mighty have fallen”. Quite ironic, don’t you think?

Views from the top of the mosque of Abu Dahab

Views from the top of the mosque of Abu Dahab

View of the mosque of Abu Dahab

Details inside the dome of the mosque of Abu Dahab

Follow the rest of the virtual Cairo series here