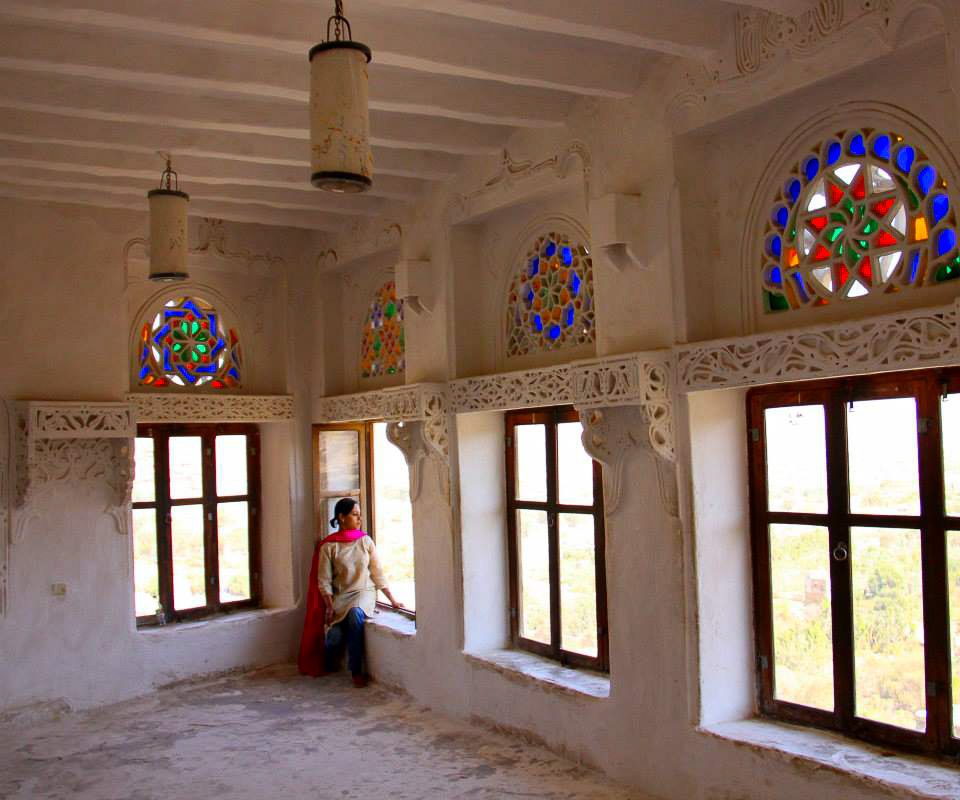 A visit to the Rock Palace of Wadi Dhahr happened all of a sudden. Post Bayt Bows day of unrest, I was a bit afraid to go exploring. My departure date for Socotra was just round the corner and I was contented enough to stick to the safety of my room. Thus the rest of my Sanaa days continued uninterrupted, with me trawling the internet on free wifi during hot, sunny days, loitering the winding maze of alleys for cups of tea in the evenings and going for sumptuous dinners with my guide, Mohammed at night. Food was the Yemeni national pride and my favourite place was an open air street food market near the Old city. It was held in a small square, where street food vendors hawked kebabs, sugary tea, fuul, fish and other chicken dishes. Huge clay ovens tossed out flat bread in large batches and kebabs sizzled succulent over glowing embers. Strings of naked bulbs, sprigs of fresh mint, quickly set up rough hewn tables and benches made up the entire place and singsong voices of the vendors rose to shout orders and shoo away beggars.

The Rock Palace of Wadi Dhahr

Those Sanaa evenings were very lovely and it was during one such dinner, that we planned a trip to the Rock Palace of Wadi Dhahr. The day was still fresh by the time we left Sanaa and after a quick lunch of wood roast chicken, we proceeded towards the iconic Rock Palace at Wadi Dhahr. Located atop a rocky outcrop of the beautiful Wadi Dhahr Valley, Rock Palace was to Yemen what Taj Mahal is to India. It was Yemen’s most iconic structure and one of its most photographed monument. Built in 1786 by a well known Islamic scholar and cleric, it is also known as the castle on the rocks. The valley of Wadi Dhahr was famous for its beauty and it was a short 20 minutes drive from Sanaa. Surrounded by fruit trees with the rocky pinnacle protruding from their midst, the Rock Palace of Wadi Dhahr promised to be an unforgettable sight, but in the hazy heat of noon, none of the valley’s greenery was visible. Although, vineyards and orchards stood in neat rows, clusters of grapes and plump pomegranates and apricots were coated with dull dusty brown. Even the majestic fir trees (imported by the Imam himself) looked insipid and I wondered at the possible repeat of the Hababa disappointment.

A palace cut into a rocky outcrop

The first sight of the Rock Palace of Wadi Dhahr, however, took my breath away and the restored castle turned museum was truly spectacular. It was perched on top of the strange rock pinnacle like a natural crown and its architecture seamlessly mingled with the contours of the huge outcrop. The palace was decorated with meandering staircases opening up into corridor of rooms in the most unexpected ways and the rock was cut to accommodate the entire complex within its heart. An entire maze of kitchens, bedrooms, store rooms, sitting areas and recreational areas were separated by complex system of stairs and the palace was cooled by network of huge windows, cross ventilation and water wells, housed inside the rock. I loved its stone cold heart, its lovely play of rainbow coloured stained glass windows and the sweeping vistas which opened up from its height. It was easy to spend time there I hung around there till muezzin’s calls filled the Wadi Dhahr. The violet skies heralded an end to my Yemen mainland explorations and I remember looking over Mohammed’s shoulders to take long last looks at the troubled beautiful countryside.

Rock Palace of Wadi Dhahr, my last stop in Yemen

The sun turned soft by then and mellow light filtering through the stained glass produced fuzzy faded butterflies. Mohammed stood facing the huge open window and the entire panorama spread in front of him was awash with setting colours. Inside the room, where he stood, a dim light cast fuzzy stained glass rainbow patterns on his pristine white dress and the vision of light spread in front of him was breathtaking. A young Yemeni man standing at the edge of light and darkness at the Rock Palace of Wadi Dhahr, represented the reality of his country’s prevalent situation and the way his people somehow were poised on the brink of extreme danger. I tiptoed over to peep at the panorama over his shoulders and I distinctly remember wondering if Yemen could really understand the danger it was in. I also remember thinking that, truly beautiful and splendidly glorious, loss of Yemen’s heritage would be a dark day for world history if it ever it may happen, for after all, it is the land of the wise and powerful, Queen of Sheba and the progeny of King Solomon. Sadly, I never knew how soon my prophetical thoughts would come true.

The Rock Palace is cut

Cut into a rocky outcrop

And it is decorated with

The Rock Palace of Wadi Dhahr

Place for the locals

To shoot their wedding pictures.

A short drive from Sanaa

From the main city of Sanaa.