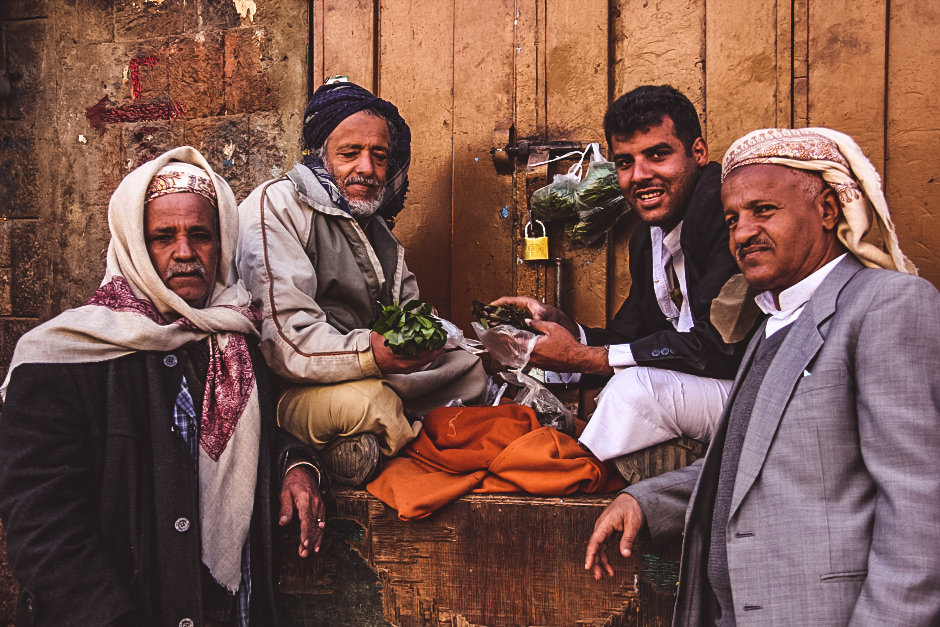 Sanaa travel: the quirks, the beauty, and the shocks

The post landing formalities at Sanaa airport were very smooth. The single immigration window for non Yemeni passport holders was not crowded. Even before applying for the visa, I had pre booked a guided tour  and the travel agent took care of the invitation letter which is mandatory for people visiting Yemen for tourism purpose. The Sanaa travel guide, whose services came to pick me up at the airport and from the very first day, we did not gelled well. He was an aspiring tour guide, who was practicing tourism under a registered travel agency’s cover and his too familiar welcoming hug made me wary of him. Yemeni or Arab men in general are not brought up in a culture where cross gender hugging/touching, as a sign of greeting, is acceptable and that gesture was the biggest giveaway of his not so nice motives.

A group of Yemeni men at a local market

The diversity of Yemen

I have often been asked whether traveling in Muslim countries as a single woman came with many unpleasant situations and surprisingly, the answer has always been “NO”. Personally, I have found that, the tourism friendly Muslim countries take pride in their their solo woman guests and they usually go an extra mile to ensure their safety. During my Sanaa travel, unfortunately, I met one such rare predator after the first two days, I changed over to another agency. The new guide not only took care of my safety, but also ensured that I had a very pleasant time. Under Mohamed, my new tour manager’s guidance, I not only explored the capital city of Sanaa, but ventured deep into the Yemeni countryside, as much, time and tourist safety regulations permitted. The ancient land of Arabia Felix or Yemen was a far cry from the barren, deserted stretches of most of Arabia and the country is blessed with misty slopes, endless coastline and fertile lush valleys/wadis.

A twilight breaks over the old city of Sanaa

The capital city of Sanaa is the Houthi capital of Yemen and the magnificent old town is an UNESCO World Heritage Site. It is one of the most beautiful cities in the world and during my entire Sanaa travel, I hardly ever moved out of the old town. Continuously inhabited for more than 2500 years, Sanaa was given an official status of an outpost of the Yemenite kingdoms in the second century BC and according to the legends, the city was founded by Shem, son of Noah. It is one of the oldest populated places on earth and nestled in a mountainous valley at 2,200 meters above sea level, Sanaa is also one of the highest capitals in the world. Thus my Sanaa travel days were always pleasant and the evenings were chilly. The city experiences some of the most photogenic sunrises and sunsets and the unique architectural style of Old Sanaa can be credited for this magical, mystical aura. Old Sanaa has a spectacular skyline, with towering minarets shooting into the sky. Spacious areas of gardens, caravanserais, mosques, bath houses and souks lie interspersed between densely packed houses and narrow winding alleys. The most striking feature of the old city is it’ thick concentration of rammed earth and burnt brick highrises and they are all individually decorated with beautiful geometric patterns of fired brick and white gypsum. The multi storied towers are built on stony ground floors and their narrow corners filter long fingers of sun rays in a most magical manner. The lovely stained glass windows of the buildings create hundreds of tiny, twinkling rainbows and in the evenings, the dancing naked light bulbs make Arabian Nights dreams seem to come true.

A woman walking through Old Sanaa

I fell in love with Sanaa at first sight and overstayed there by choice. It was before my Socotra trip, when the situation was still relatively stable. During that time, I visited the nearby places of Thula, Shibam, Kawkaban and Baytbows and each of those explorations lead to new discoveries of the delightful past of Yemen. Beautiful, layered and exquisitely rich, my Sanaa travel was an eye-opening experience and a reminder to seek beyond the well trodden paths. As I mentioned before that many believe Sanaa was founded by the son of Noah and when Shem was looking for a spot to lay the foundation of the city, he originally chose a site further away from the present location. But just when he was about to start his project, a bird magically appeared from the sky, plucked his guide rope off the ground and dropped it further east. Shem immediately recognized it as a sign and thus Sanaa was born out of a beautiful legend, Biblical myth and divine intervention. Sanaa indeed is like no place on earth and the Houthi capital (Aden is the world recognized Yemeni capital) can be divided into two parts. The new city is a far cry from the old quarters and it had broad roads, upscale restaurants, luxury stores, posh salons and a brand new Al Saleh mosque.

Children playing in the streets of old Sanaa

Sanaa local life as I saw it

The fateful President’s house was also located there and during my Sanaa travel, I noticed a lot of ostentatious stores of Porsche and the likes. My favourite Alshaybani Restaurant was in the new city and it was very popular among better off Yemenis, foreigners, young families and college crowd. Mohammed, his friend and I have spent many pleasant afternoons there feasting on Yemeni flat bread and Saltah: cute little stew of beans, some kind of meat, eggs, spices, tomatoes and fenugreek, Saltah is always been served in a communal steaming hot stone bowl and we used to scoop out the gravy using the bread as spoons. Yemeni food is to die for. It is an unique mix of Middle Eastern, Turkish and Indian Mughlai influences. Kababs and other tandoor (clay oven) based dishes are very popular and I loved the ample use of hawaij spice mixture in their food. Honey is generously used in their cuisine and Yemen produces some of the world’s best bee nectar. Apart from the glaring economic difference, the whole city, I found during my Sanaa travel, to share some very unique features. Yemen was like a plastic dump yard and the whole country was littered in a most eye sore manner. Plastic bags could be found flying in the air, dumped in heaps and scattered at every possible inch of Yemeni space and the biggest reason (as pointed by Mohammed) was khaat. A flowering plant commonly found in Arabian Peninsula and Horn of Africa, Khaat is a serious addiction. The tradition of chewing khaat leaves date back to thousands of years and it is a WHO (World Health Organization) certified drug of abuse. Although, considered as contraband in most countries around the world, Khaat is grown all over Yemen, Djibouti, and Somalia and the entire population seem to be addicted to it. Yemeni morning markets are always very colourful and the milling crowd around the khaat vendors were a sight to behold.

Sanaa travel was all about discovering traditions

Men and women crowded around them to purchase plastic bags full of tender khaat shoots and the euphoria inducing leaves were quite expensive. As I learned during my Sanaa travel, khaat chewing came with a technique and from selecting the best leaves, snipping off the stems with teeth, stuffing them into a massive growing ball inside the mouth and continuing to chew one for hours, the addiction was like a national pastime. The khaat market in the old city was my favourite place to photograph and nearly every morning of my Sanaa travel I used to walk around there to take pictures. The Yemeni people are one of the most friendliest in the world and they love being photographed. Though the graceful veiled urban women in black seemed a bit intimidating, the rural ladies in spite of their fully covered attire, were absolutely gorgeous. The Yemeni men in contrast to their women were extremely suave. They, in general preferred their traditional costume over Western attire and their perfect combination of dazzling white thoob, meshedda shawl headdress, dark blue jacket, wide ornamental belt and ornate curved Jambiya dagger made them look very dashing. Some of them were very forthcoming too and a Yemeni husband lovingly holding his wife’s hand in tranquil privacy was not a rare sight.

Guns are every where in Sanaa

The biggest shock of my Sanaa travel came from guns. They were everywhere; a sight that always made me nervous. Yemen is a conglomerate of different tribes and carrying weapon is a part of their cultural heritage. The sheer number of assault weapons seen on Sanaa streets was hard to come to terms to and I remember gawking in fright at my first sight of a Kalashnikov rifle when a man bearing the deadly weapon came to withdraw money and stood next to me at the bank teller. In Yemen, there are guns everywhere; at the markets, on the streets, at weddings, restaurants, teas hops and on the streets. From being constantly scrutinized by armed Houthi boys at multiple checkpoints scattered across the country, rubbing shoulders with gun totting residents at Old Sanaa to seeing men celebrate at wedding parties by either firing them/dancing with them, it took me just one day to get seriously weapon weary. No matter, how common and a quintessentially Yemeni sight it was, even accidentally touching/rubbing into one, always sent a cold shiver running down my spine. Those feelings are hard to pen down. I remember always trying to look away from them and pretend as if the weapons did not exist, but they were there all the time, everywhere. Sometimes, in the hot afternoons, when I looked down from my hotel room at the Old Sanaa street life, I found happy squealing children playing hide and seek, around their gun wielding watchful fathers. In my eyes, it was a very bittersweet sight: this close proximity of children around guns. Those moments are as unforgettable as the spectacle of the curious play of light and shade in the historic streets of Old Sanaa. Such are my Sanaa travel impressions: the beauty, the culture shock and the quirks.

The local market near my hotel

Was a place where I used to

Every day to take pictures.

This is the tea shop where

I used to go every evening

Do some people watching

And take in the local culture.

Is the Houthi capital

Of Yemen, one of the

Poorest countries in the world.

Sanaa is one of my favourite

Places in the world.